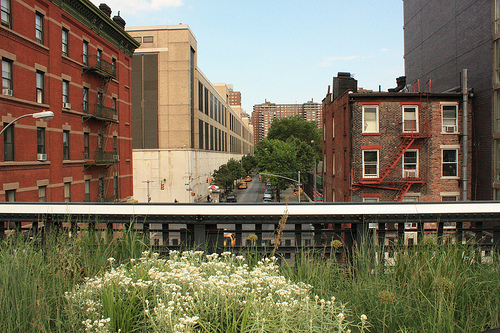 I love New York. I’ve visited enough times that the magic, really, should have worn off by now. I’ve gotten horribly lost on the subway (I once ended up in Queens), watched someone rip off my cab after I ran half a block to hail it, and had the girl at Zabar’s Cafe let my order grow cold even though she was staring right at me. Even with the dirt and grime, the streets crowded with tourists (of which, I realize, I am one), even with the prevailing smell of sewage mixed with gyro meat that will not escape my nostrils, I find myself smitten. I’ve seen it, I smelled it, I’ve had it shove me on the subway- and I still love it.

So much so, that at the close of every trip we take to New York, as Rand is packing up his bag, I usually say the following …

“Why are you bothering to do that, when we’re never leaving here?”

He smiles and reminds me that our home and friends and his work are back in Seattle, as is the rest of my wardrobe. And if we lived in New York, it would be in an apartment the size of a shoe closet.

With a sigh, I pack up my bags, and grumble something about rent control.

Of course, this scenario changes radically if we happen to be in the city any time between May and August. I do not fare well in hot weather. And by “hot”, I mean anything above 73 degrees. After my third shower of the day (brought on by a Lady-MacBeth-like desire to be clean) I will squeeze Rand’s hand, and gently whisper that if we do not get out of the sweltering concrete dungeon that is New York, there will casualties.

“You’re cutting off circulation to my fingers,” he replies sweetly (his is absolutely adorable when he winces in pain).

“I know,” I say, mere centimeters from his face. “And that will be the least of your troubles if you do not return me to the 70-degree bliss that is a Seattle summer.”

Recently, I found myself in New York with five hours to kill. Normally, this would be an unacceptably short amount of time. But considering that it summer, it was barely enough hours in which to not die of heat exhaustion. I contemplating spending it in a chilly museum, but I’ve done that so many times. I wanted something novel and grand. I wanted to see where New Yorkers went in the summer.

After soliciting suggestions from folks on Twitter, I decided to visit the Highline, the expansive above-street-level park that runs from the Meat-packing district up through to Chelsea (Note: I apparently do whatever anonymous people on the internet suggest. Please use this information with discretion.) Originally an elevated train track (built up high so that pedestrians at street-level would not be harmed), it is now filled with indigenous plants, wide walkways, ice cream vendors, and locals and tourists alike.

The cab driver I hailed looked at me like I was positively mental when I asked him to drive me there. From the climate-controlled comfort of his cab, I could see why. Any response besides, “Let’s just drive around for a few hours with the air on full-blast,” would have sounded mad. But the Highline would at least get me above street level, above the crowds and the heat of the sun bouncing up off the black asphalt, or so I reasoned. 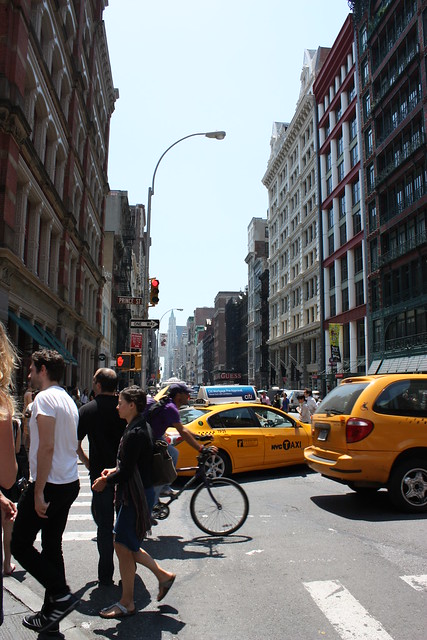 Dear lord, people were wearing long jeans. I don’t know how they did it.

I’d been to the Highline before, but a brand new section of it had opened only days before – nearly doubling the park’s size. I walked up the steps, praying that the new section would offer shade (the one thing the older part of the park did not have).

The good news is, yes, there was shade. 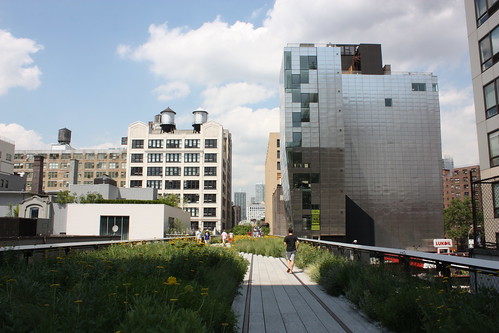 See? Shade! I even got to stand in it.

The bad news? The shade was hot. I KID YOU NOT. Up until that moment, I didn’t even realize that such a thing could be possible. The same buildings that cast a shadow onto parts of the park also block any pesky breezes that might interfere with one’s enjoyment of the 90-degree weather. 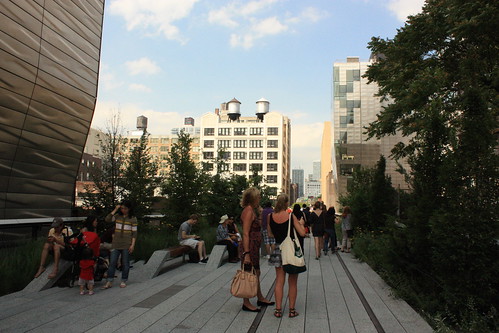 THE SHADE IS A SHAM. A SHAM! 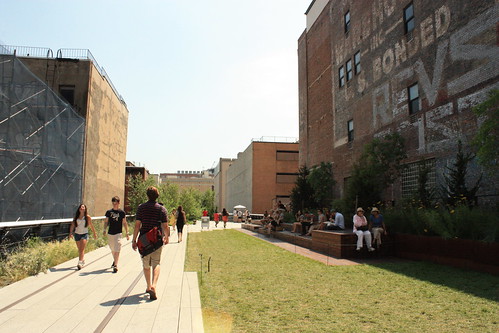 Still, the temperature up in the park was far more manageable than down below. And the park is, even in the sweltering heat – truly lovely. As a girl from the Pacific Northwest, I love my greenery, and it’s something I start to miss whenever I’m in Manhattan. The Highline offers plenty of it, even if, on Mondays and Tuesdays at least, you can only look at. 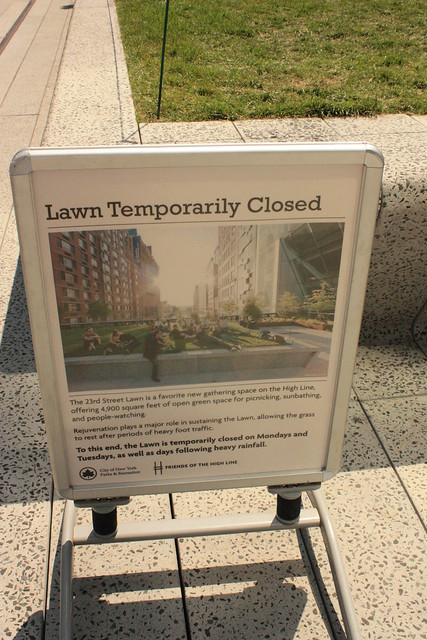 I understand the need for this, but still found it perversely funny.

Notice the lawn here is blocked off. The sign says it’s so the lawn can recuperate after a busy weekend, but I like to think it’s so the grass doesn’t escape and run amok on the streets of New York. 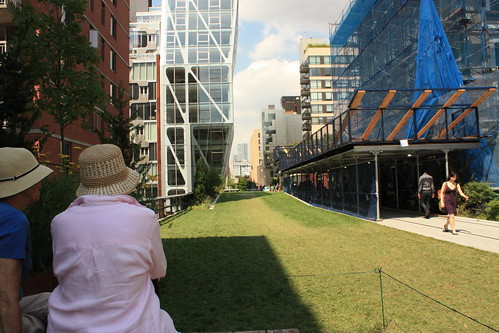 The Highline: where New Yorkers can look at plants without the inconvenience of having to touch them.

I imagine that if the lawn had been open, the Highline would have been more crowded than it already was. There were people everywhere, eating ice cream, glugging from enormous bottles of water, and profusely sweating. I fit right in. 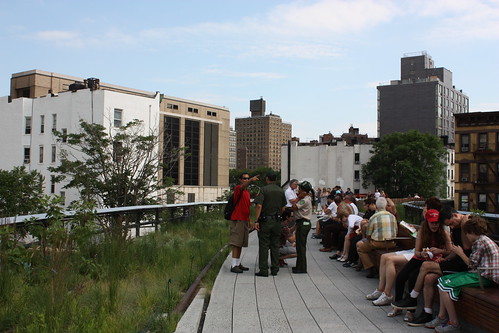 The new section of the park offers a lot more places to sit, and, in my opinion, has better views than the old section. 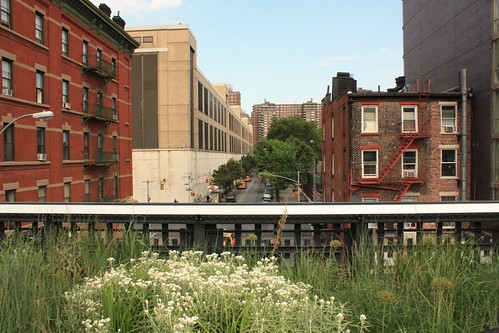 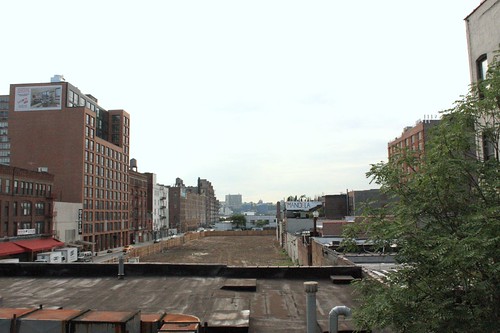 It’s a strangely surreal thing to see this elevated garden cut through the city, a green band running through the concrete jungle of the West Side. 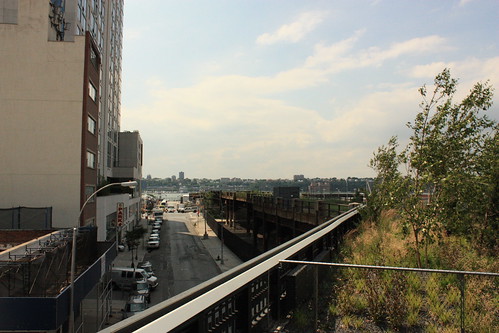 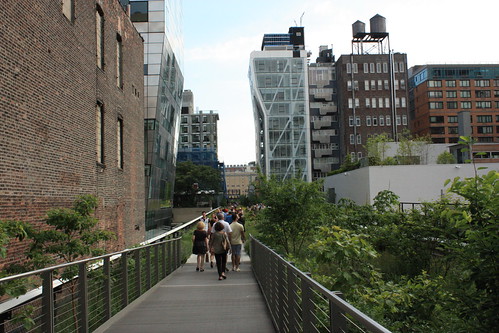 There’s even wildlife. I mean, actual wildlife. On the streets of New York, the closest you’ll see to indigenous fauna is the occasional rat, a few pigeons (or sky rats, as I like to call them), and a couple of girls in leopard print skirts (well done, ladies). But with the expansion of the Highline comes bird feeders! With actual birds inside! 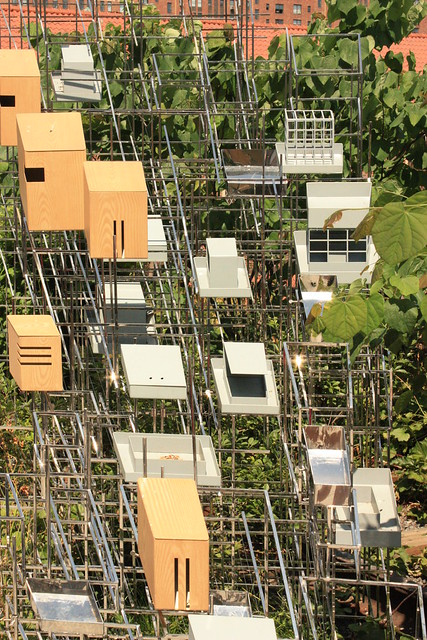 The birds are camera shy. But they were there. BELIEVE ME.

There was also an origami one, in the event that a real one didn’t show up. Gotta hand it to New York – there’s always an understudy available. 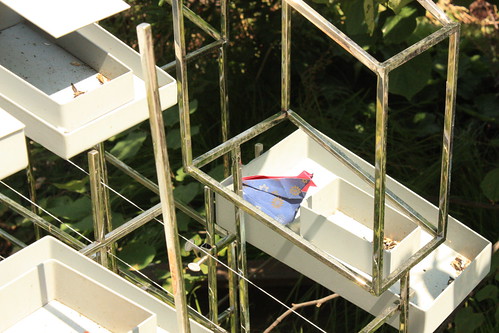 I found the new portion of the park to be much lusher than the old section of the Highline. Outside of Central Park, there are few places in the city that offer than much plantlife. Things are alive and growing. 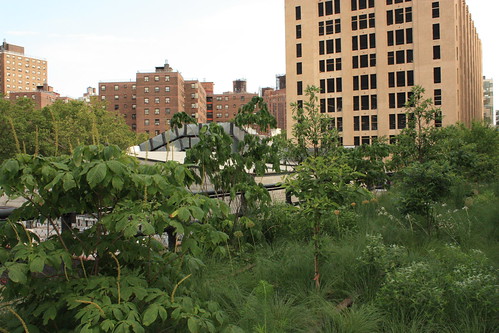 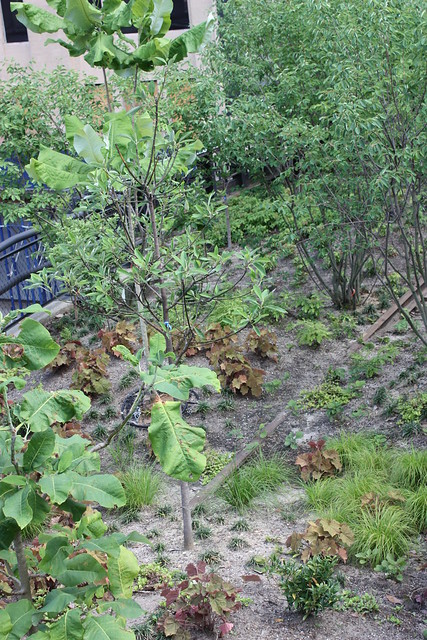 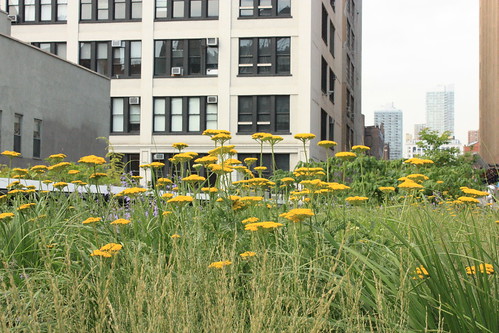 If you angle your camera juuuust right, you can almost pretend you aren’t in New York anymore … 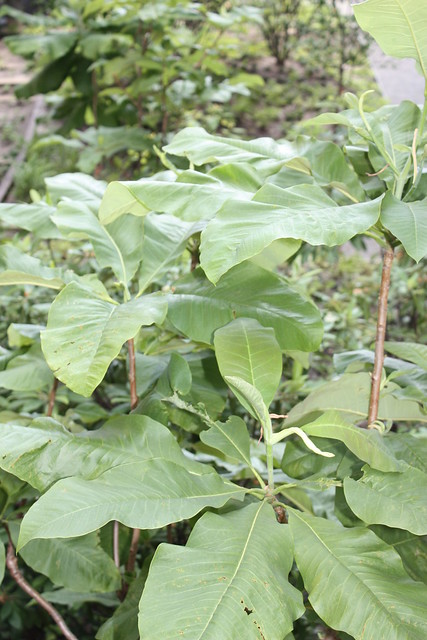 But really, considering how much the city has to offer, why would you ever want to do that? I mean, unless it’s the middle of summer.

The Essentials on The Highline:

Verdict: Recommended. Though I’d check the weather before heading out. It’s definitely nicer on a cooler day.

How to get there: There are a slew of buses and subways that will get you close to there, but you will likely end up walking a block or two (most of the trains stop at 7th or 8th; the Highline is on 10th). Or if it’s really hot, you can be a weenie and cab it, like I did. There are entrances to the park on roughly every other block, but not all of them are wheelchair accessible (though the park itself is).

Ideal for: Strollers; walkers; photographers; anyone who needs a bit of peace above the din of the city streets. Dogs are not allowed.

Insider tips: The park is open from 7am to 11pm daily. I’ve found it’s much less crowded very early and very late in the day. The lawn at 23rd street is closed on Mondays and Tuesdays, as well as after heavy rains, for rehabilitation. Wear comfy shoes and bring your camera.  Remember to stay on the paths, and don’t pick or disturb the plants or wildlife.

Nearby food: There are a few ice cream and drink vendors in the park, but naturally that gets a little pricey. There’s also The Lot: a street level “plaza” (ahem, parking lot) in the shadow of the Highline that features food trucks and free events, but it’s supposedly only around for the summer. And, of course, you can always bring a picnic with you.

Good for children: Yup. You’ll want to make sure little ones stick to the paths, but other than that, they should be fine.