My family members do not always understand me. I feel like a foreign exchange student in their homes – I’m most definitely welcome, but damn it, I’m strange. My accent is funny. I don’t eat pasta daily. I don’t have several gallons of sauce sitting in my freezer, in the event that we might have unexpected company. I purchase pre-made gnocchi, and I don’t drink wine out of a box.

And most significantly, I like sweets. This is perhaps one of the biggest things that separates me from 80% of my blood relations. They are perfectly content to go days, if not weeks or lifetimes, without anything that even remotely resembles sugar. I’ll never forget the time my aunt once told me not to frost a cake that I had made.

“You know,” she said, gently, “because some people don’t like frosting.”

“Bwa-whaaaaa?” was all I was able to sputter out before promptly fainting. She might as well have asked me not to bake the cake, too, so ridiculous was her request. (When I came to, I frosted it anyway.)

These are the sorts of people I’ve had to deal with my entire life. People who – I swear this is true – finish their meals with fruit.

Have you ever heard of anything more grotesque?

Over the years, we’ve learned to deal with our differences. I force feed them cakes and pies and tarts with fruit surreptitiously hiding inside. They, in turn, stock up on biscuits and chocolates and cake in anticipation of my arrival. The last time I visited my aunt, she came back from the grocery store with this: 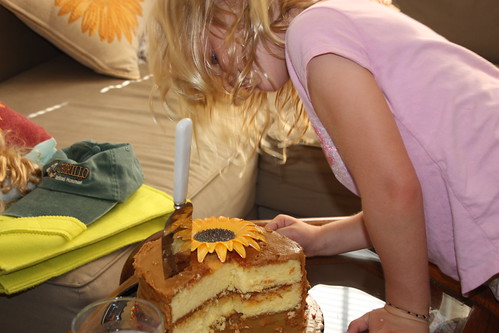 We polished that sucker off. I had some help from the wee one.

It was a rather exceptional vanilla cake with caramel frosting. It broke my heart. Besides being one of the best grocery-store-cakes I’d ever eaten, that cake was the embodiment (en-cake-iment?) of my aunt’s affection. It was something she’d never have purchased for herself, but she bought it because she knew it would make me happy. If you ever see me getting teary over a dessert, it is because of all the things I attach to it (or because you’ve given me too small a piece).

Whenever they see me ingesting sugar (which is often) their response is always, “Oh, Geraldina likes sweets. It’s because she’s American.”

There’s probably some truth to that. I am American, after all. That might be why I flit around looking for glucose like a demented, wide-bottomed hummingbird. Had I grown up in Italy, my veins might not be so full of fondant. My liver might not be enrobed in chocolate. My intestines might not be made of taffy. And I’d likely fit into all those teeny-tiny Italian jeans I saw in window displays all over Rome. But alas, I was one of the few people in my family born in the U.S.A. Land of the frosted. Home of the brulee.

No other country does desserts the way we do. We are excessive and innovative and superfluous. Desserts here are not considered a success until they could put an elephant into a diabetic shock after one serving. And no place I’ve found embodies the American view on desserts more than Led Zeppole (we’ll address the brilliance of the name later). First, let’s take a look at the menu posted outside: 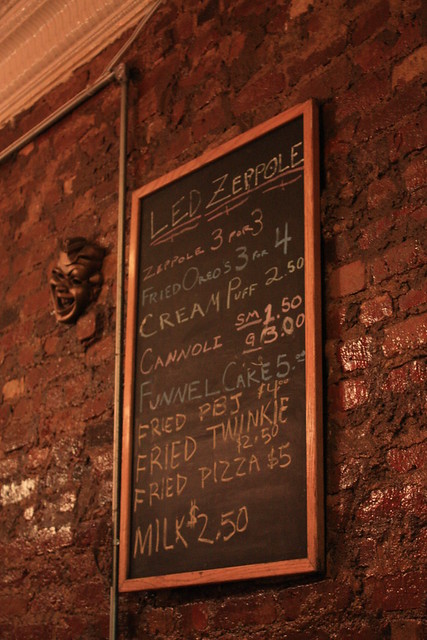 Probably-true-fact: the night that we ate fried Oreos, someone, somewhere, died of starvation.

It was magical. Nutritional black holes like Oreos and pbjs on Wonder Bread, batter dipped, deep-fried, and sprinkled with powdered sugar. Nay, this was beyond magic. This was America.

It was a hot sticky night in Manhattan when we stumbled upon Led Zeppole and decided to patronize the establishment on the name alone (if you can resist a restaurant with a punny name, you are a stronger person than I). Joining us was our friend Tom, a Brit who recently moved to New York from London, and some of his colleagues.

Even though a small group of teenagers had taken up residence at several of the tables, giving the establishment a rather Lord of the Flies chicness, we were not deterred. The decor on the walls was nothing short of brilliant. 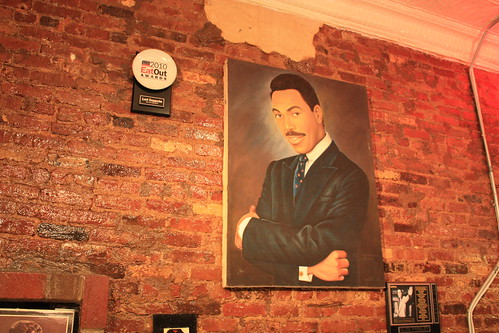 The teenagers thought that the painting of Jim Morrison in the corner was Che. I was slightly alarmed, but you know what? They kind of look alike. 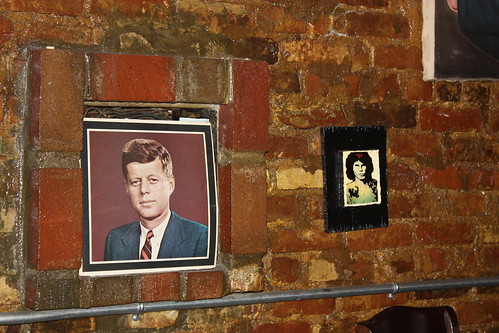 Rand may have gotten a little excessive in ordering dessert. He just started doing down the list, asking for one of everything. After all, we had to show Tom a good time. What better way to do that than with a friend peanut butter and jelly sandwich? 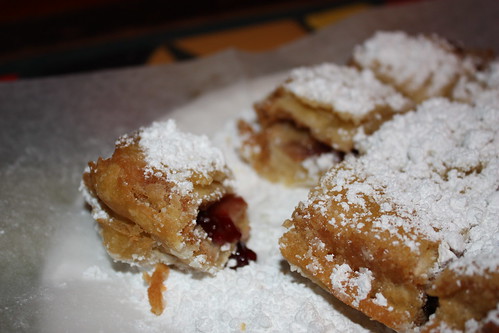 We also got an order of zeppole, the fried Italian pastry for which the establishment was named. Sadly, they were not even remotely reminiscent of what zeppole should be – a crispy, light, golden brown doughnut. Instead, we were treated to warmed balls of dough, rolled around in powdered sugar. We ate them anyway. Later, I’d note that I had powdered sugar all over my person and under my nose. Combined with the obvious junk food high I was on, I am fairly sure I looked like I had ingested several pounds of cocaine. Which I’ve never done, but I’m guessing probably doesn’t feel all that different than eating a plate of undercooked zeppole.
– 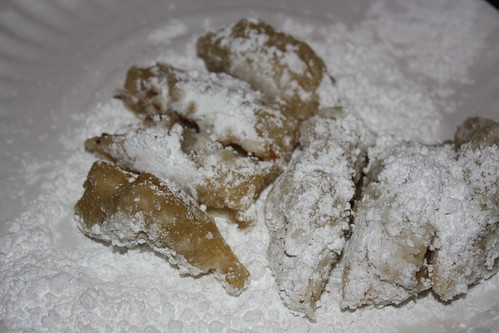 I think these are they. In the end, it all looked and tasted remarkably the same.

We were blessed with  a little downtime between our courses of fried excess. Everything at Led Zeppole is made-to-order, so you have a few moments to digest and reflect on the epicureal sins you’d just committed.
– 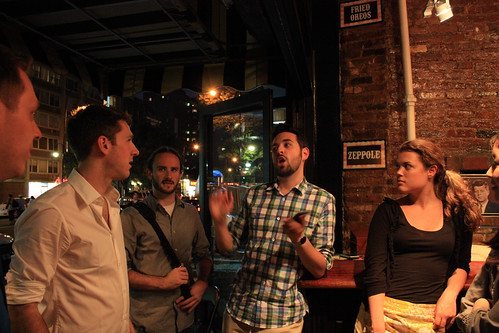 Which is what we were doing here. Probably.

Plus, you have the chance to come up with other punny names of dessert stands bases on musical groups. Names like …

And then the last course arrived. Fried Oreo cookies. Which makes eating a regular Oreo seem like you are noshing on an apple.
– 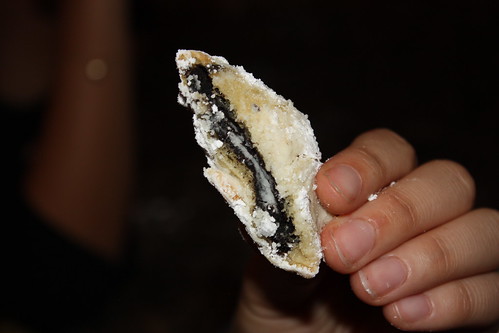 I can feel my arteries clogging just looking at it.

After that course of fried, dough-enrobed snacks, we started to feel ill, and figured that was probably a good sign to call it quits. Sadly, Tom didn’t partake in any of it. He’s not a big dessert eater, and he can’t have gluten or dairy. In that respect, Led Zeppole may not have been the best dessert choice (and also because two of us were passed out drooling in the street). But we wanted to show him something excessive and innovative and nutritionally vacant. Something truly and blissfully American. We meant well – we just made terrible decisions. Which, really, could have been the theme of the night (later, still on a sugar rush, I drove on the streets of Manhattan for the first time. Twas not the best decision I’ve made).

I have to hand it to the Tom, though –  he was a good sport, even though he spent the entire night looking at us like we were bonkers.
– 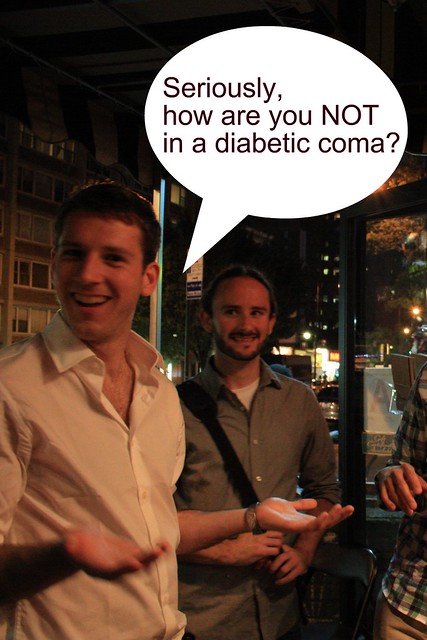 As a dessert-loving American, it’s not the first time a European has looked at me like that. Someday, Tom will understand. He might even buy me a cake. Until then, I simply replied to him the way I do to my relatives.

P.S.  – I won’t lie – it is hard to read about that night and not feel a little queasy. My heart felt heavy as I read this post, and I suspect it wasn’t just because my arteries were still clogged, but because deep-frying desserts makes me feel a bit too entitled. So I decided to donate to Northwest Harvest. My heart feels a tad lighter. Instead of indulging the next time I crave a dessert, I might just donate again. I suspect it will be good for my cholesterol and my soul.