There was a knock on the bathroom door in the middle of the night.

“I’m fine,” I said. Which was sort of true. I was presently in the process of squatting in my friend’s old clawfoot bathtub, running cold water over my head and body in an attempt to alleviate the crippling migraine that had come over me. Migraines aren’t new to me – they strike more or less monthly (it takes little sleuthing to guess when) and render me a miserable wreck. This time, one had hit while I was visiting my friend Christine, who was now knocking at the door.

“I didn’t throw up,” I shouted over the rush of water. As though it was an achievement.

“It would okay if you did,” Christine said gently, as only women who are mothers can.

I’ve no doubts she was sincere when she said those words. Christine and I met in the seventh grade. There are elements to our friendship that are grandfathered in. Among them, she can call me Deenie (and before you ask, no. Do not even think of trying it, even as a joke), and I may vomit in the Victorian clawfoot tub of her Wichita home.

That’s the thing about friends from childhood. You may live in different towns, and living radically different existences. But the now-divergent strings of your life were entwined once, and if you trace it back, you can still find that knot. It means that you’ll likely know each other forever. It means that you might not always get along, might not see eye-to-eye, but you’ll always love eachother.

It means that you can hop on a few planes and spend the weekend with them, even if you literally have not spoken a word to each other in 15 years, and get sick in their bathrooms. Which is precisely what I did.

Though it all happened barely a month ago, it’s a story I’ve had to tell over and over again. Mostly because people keep asking me what in the hell I was doing in Wichita.

Which is a very good question indeed.

It’s not that Wichita is not a nice place. I enjoyed myself plenty, despite the fact that it was consistently more than 100 degrees every day that I was there – a temperature that sounds positively unearthly (I went so far as to calculate what it was in Centigrade as well, so I could effectively communicate to all of my non-American friends just precisely how hot it was. “Forty degrees!” I screamed, feeling rather worldly and cosmopolitan in the process). It is simply that Wichita is one of those places that I honestly and truly never thought I’d see. I’ve never lived there. I don’t have family there. And up until Christine moved there last winter, I could safely say that I didn’t know a single soul in the entire state of Kansas.

I maintain that it began as a joke. Christine insists she was serious from the start.

It began with a rather innocent tweet between Christine (location: Kansas), her husband, Jason (a.k.a., @raisingdad) and our pal Deanna (location: U.K.). They were jokingly trying to rope me into babysitting, for, as Deanna put it, I was childless and had yet to be traumatized by the wee ones. I must hand it to my friends – they are surprisingly well-reasoned, even when they are trying to get me to fly across he globe to watch their offspring. 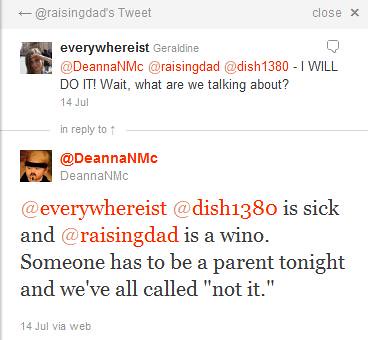 Notice how I agreed to watch their children before I knew what the hell was going on.

Of course, it would require a plane trip for me to get to either of them. Deanna lives somewhere in the Northern English countryside. I could easily get out of that one. And Christine’s in Kansas. Kansas. I had only a vague idea where Kansas was. I knew it was north of Oklahoma, and just west of THE MIDDLE OF NOWHERE, right? Squirreling out of this would be a snap. 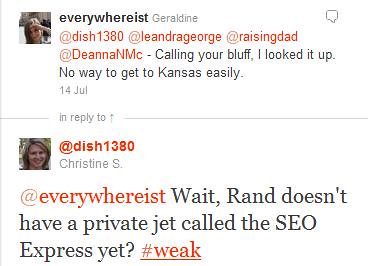 Nope. No private jet. Some days I don’t even know why I’m with him. Wait, yes I do.

Did I mention Christine is a lawyer? Yeah. I had lost before before I had even started.

That’s right: girlfriend was looking up flights for me.

This was nuts. She hadn’t seen me in 17 years. SEVENTEEN. That’s a lifetime. A decade and half is more than sufficient time for someone to become a jerk. I could have joined a cult, or started clubbing baby seals. I obviously hadn’t, but Christine didn’t know that. What if I annoyed her? What if she discovered that I was a snobby west-coast liberal who does nothing but unfairly make fun of small towns like the one in which she lived? Which is, regrettably, ENTIRELY TRUE. 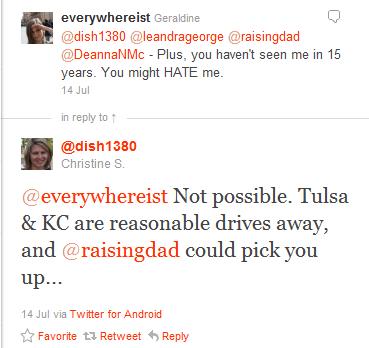 She wanted me to visit. She didn’t expect me to watch her son. Her husband was even willing to drive several hours to pick me up from various airports. I was running out of excuses. It’s not like I had anything on my plate. Rand was heading off to Brazil for a few days. I had elected not to go with him (the ticket prices were excruciating, and he’d barely be on the ground). I was going to spend the weekend blogging and doing laundry. Plus, I wanted to dedicate some time for yoga and cake-eating (such is the one-step-forward, one-step-back dance of my life).

Couldn’t I do most of that in Wichita? Particularly if I swapped out “yoga” with “more cake-eating”? 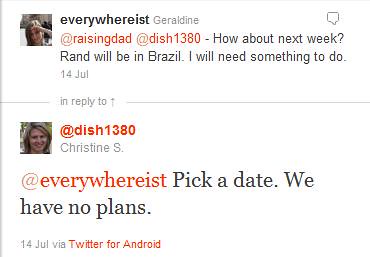 Scratch that: I was DEFINITELY going to Wichita.

That was it. A series of tweets. A few direct messages. Approximately three emails. Two connections. And there I was. IN KANSAS. To hear it, it sounds like madness. But this was Christine. We had slept-over at each other’s homes in middle school. I knew her mother, her brother, her sister. Was it really that crazy? 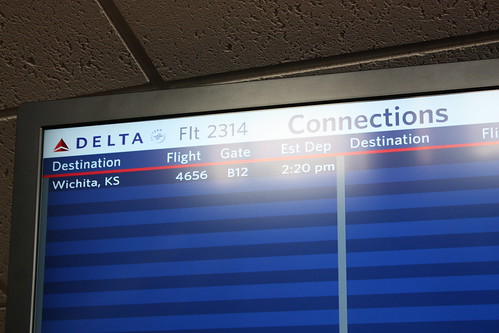 There was no going back now. I mean, not without a change-your-flight fee.

I was of two minds. Part of me thought that yes, this was absolutely crazy, and potentially disastrous. Christine and I might find we had nothing in common, and nothing to talk about. It would be a weekend of uncomfortable silences and failed attempts at polite conversation.

Incidentally, the other part of me also thought that this was crazy, but that it might be good fun, too. Thankfully, that part proved to be right. 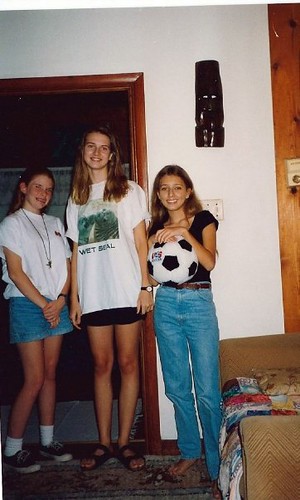 It had been 17 years. I would be substantially alarmed if she was still who she was when she was 13.  After all, now she had this little guy: 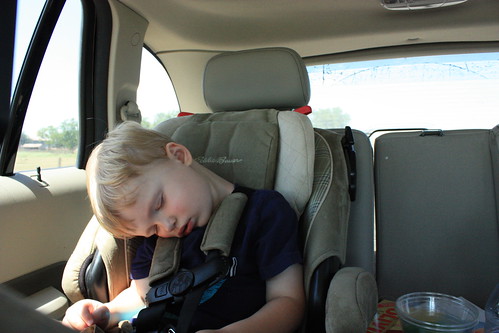 And this not-so-little guy: 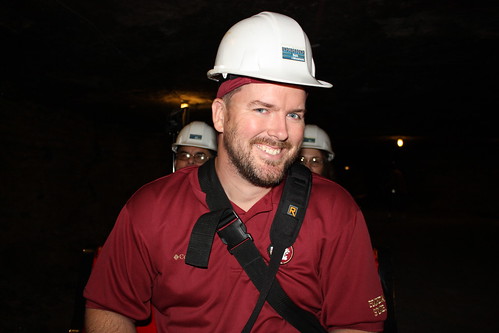 We were in a salt mine. But that’s a story for another day.

She’s a lawyer, and a mom, and someone’s wife. She was an adult now, as, it seemed safe to reason, I was. But the hallmarks of the old Christine were there. When she saw me, she ran to give me a hug (and had to stoop to do it, like she always did).

“Seeing you is totally surreal in the best possible way,” she said. It was such a … Christine thing to say. I gave her the present I had brought her – a small charm necklace that I had thought was cute, but now was nervously reconsidering.

“If you don’t like it you don’t have to wear it,” I kept repeating (how does one determine someone else’s style after a decade and a half?)

“Of course I like it,” she said, and gently scolded me for being neurotic. As I always am. 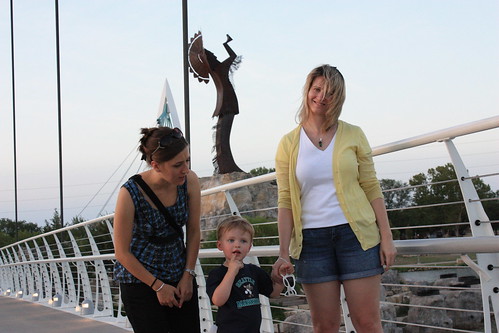 With a couple of additions.

And so I spent the weekend in Wichita. It was not odd. I felt welcome and comfortable, the way one does in the homes of old friends. They even had cupcakes waiting for me when I walked through the door. Two dozen of them. Which is ridiculous. Everyone knows that I can usually only eat one … dozen.
– 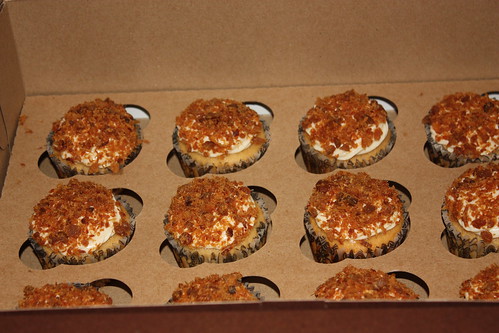 Did I mention they were topped with bacon? They were.

–
The migraine was the only downside to the trip. It struck unexpectedly, putting me out of commission for an evening. It turned out to be fine. The nausea passed, like it always does. But that knock in the middle of the night? It was a nice reminder that no matter how many years pass or where you end up, some people will always be there for you.

Even if you throw up in their clawfoot tubs.