On a foggy day in Boston, I found myself unsure of what to do, so like any reasonable person, I decided to ask the good people of Twitter.

For the record, I do not regularly crowd source my decisions. But since my current travel plans are largely dictated by “wherever I end up after I get hopelessly lost on the tram” it didn’t seem like I could do substantially worse by asking a group of faceless individuals who I’ve never met for advice.

I mean, really, what could go wrong?

Nevermind. Don’t answer that. I followed everyone’s recommendation, which was to head to the ICA – The Institute for Contemporary Art in Boston – and I’m glad I did. The ICA is not to be missed.

Even if, you know, I almost missed it. Like, literally. I almost walked right by the ICA because it was impossible to see the building in the fog, even though it’s rather large and reminiscent of something you’d see on Hoth. 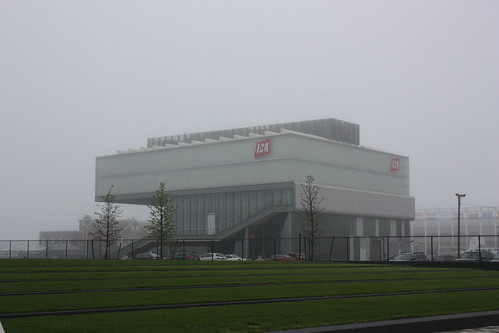 I never forgave that snow beast for messing up Luke's pretty face. 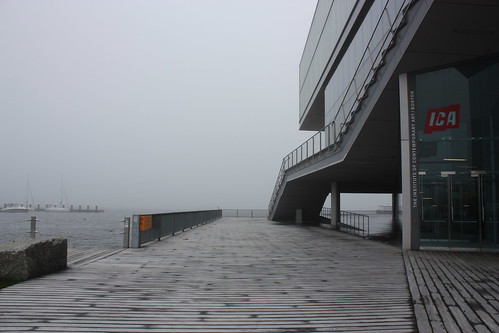 Obviously, I couldn’t take photos of the exhibits inside, but I found I really enjoyed a few of them (others, not so much – I begin to tire of every single modern artist on the planet saying  that they’re inspired by Duchamp. The reason Duchamp is innovative is that he was the first person to find artistic merit in everyday objects – he was the guy who plopped a toilet into the middle of a gallery and signed it. IN 1917. Before Congress ratified the 19th amendment giving women the right to vote, before the Civil Rights Movement, Duchamp was doing crazy stuff like that. It was innovative and unique. But EVERY SINGLE CONTEMPORARY ARTIST EVER seems to do the same thing nowadays, and it’s annoying. “Here’s the wrappers from every fast food meal I purchased last month, strewn artfully on the ground. I’m strongly influenced by Duchamp.” THAT IS NOT ART. THAT IS THE CONTENTS OF YOUR TRASH CAN. GAH. Okay, sorry. Rant over.)

One of my favorite pieces from my visit was a huge woven tapestry that was a replica of a Wal-Mart receipt. The artist, Gabriel Kuri, had gone to one of the megastore locations in Mexico, bought a few items, kept the receipt, and had local artisan weavers recreate it in giant form (he did it several times, always buying the same items, saving the receipt, and having weavers turn it into a tapestry). It was fantastic, but I don’t have a photo of it (try holding one of your receipts really close to your face and you’ll have a close approximation).

I’ve seen a lot of modern art, and I won’t lie: some of the stuff wasn’t exactly … accessible to a lot of the patrons. Fortunately, the museum staff was top-notch: knowledgeable, patient, and incredibly sharp. I listened to a young woman speak at length to an older patron who said she didn’t “get” one of the pieces. She told her about the artist and the inspiration for the piece, and talked about her own impression of it. When the museum visitor still expressed a good level of disdain, she simply shrugged and said that was the nature of art. Some folks will like it, some won’t.

Seriously, I wish I had taken her name, because I’m pretty sure she could bring peace and an appreciation of modern art to everyone on the planet.

There’s only one place inside the ICA where you can take pictures – a long-corridor lined with windows that look onto the water: 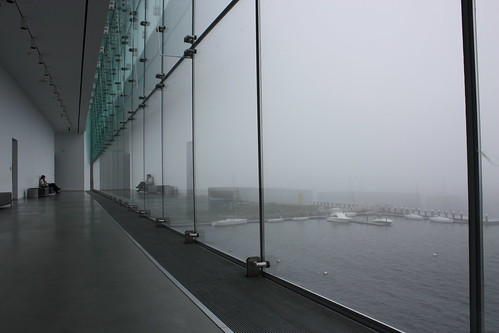 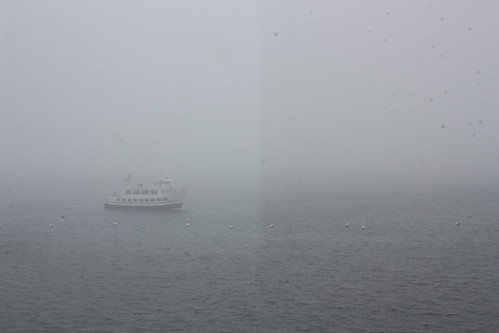 I told you it was foggy.

The Institute of Contemporary Art isn’t terribly big, and you can see every inch of it – and I mean positively every single exhibit, the gift shop, and even pop into the cafe for lunch – and be out of there in under 90 minutes. I found the cafe to be only so-so, but I was starving (plus, they had lots of local veggies on the menu, and I’d been on the road for a while, eating nothing but cupcakes and cannoli). In a pinch, it suited me just fine. 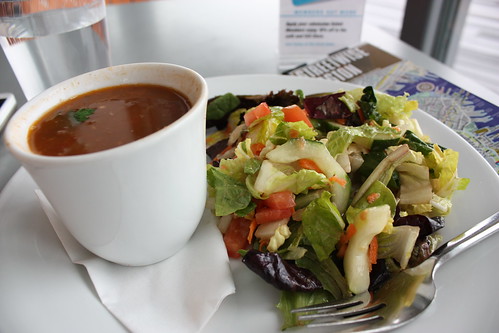 It turned out that crowdsourcing was a great idea – the good folks of Twitter didn’t lead me astray. 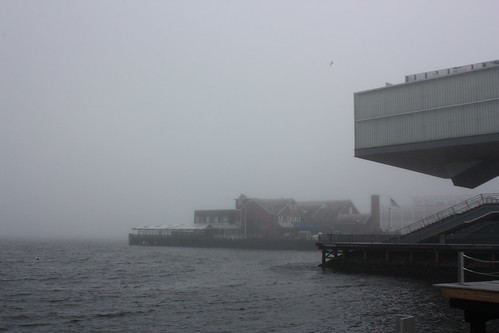 Even though the fog nearly did.

The Essentials on The Institute for Contemporary Art, Boston: