Open some windows, turn on some bright lights, and get ready for the exciting, claustrophobia-inducing conclusion of my trip to the Kansas Underground Salt Museum! And in case you missed it, here’s Part 1.

After roaming around and TOTALLY NOT LICKING THE WALLS of the Kansas Underground Salt Museum, Jason and I decided to partake in some of the tours offered therein. We’d purchased the delightfully-named “Salt Blast Pass” which included the The Train Ride (which travels on the original rails once used to haul salt out of the mine) and The Dark Ride (a guided tram into the recesses of the mine, and its current operations).

Let me remind you that I am a travel writer, and consequently I pay the utmost attention to detail. I don’t roam around with a vague understanding of my surroundings! No, absolutely not. And yet, I got these two attractions utterly confused. It might be because they were both dark, and both involved us sitting down while someone else steered us around. Also, both were kind of creepy.

Jason and I took the train ride first (I think). When someone suggested we could sit on the same seat, we both screamed, “NO!”  and then had to explain that we’re both happily married to other people (and also, Jason probably has cooties.) Just one of the many delights of traveling with a friend of the opposite sex. 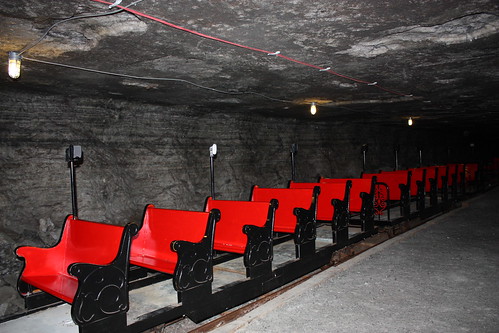 The train. Not pictured: the adorable, teensy-weensy engine car at front.

Behold how not scared of the dark I was! 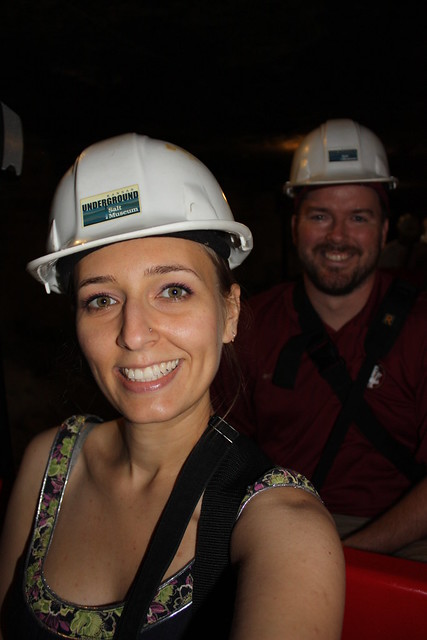 Though admittedly, this would be a really creepy picture if I didn't know Jason.

The train ride took us into the recesses of the mine. There was a dim light at the front of the train, which struggled to cut through the darkness. A few points of interest were lit from above, but the rest of the track was unlit. It was unnerving. The Underground Salt Museum has fantastic potential as a setting for a horror movie. 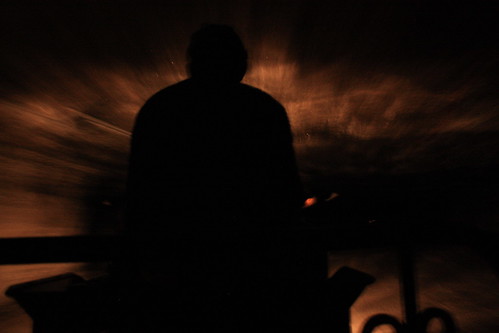 Our train operator, in the darkness. He later gave us chunks of salt to take home.

We passed relic after relic of the past. This is perhaps the most fascinating element of the museum: everything in it, at one time or another, had to be squeezed into the elevator in order to be brought down into the mine. Vehicles were sawed in half and later welded together. Huge excavating machines were disassembled and reassembled. It’s a conservationist’s dream – because of the hassle of bringing objects into the mine, things were repaired and kept running for as long as possible, rather than just chucking them and getting something new.

The carcasses of old machinery are everywhere. 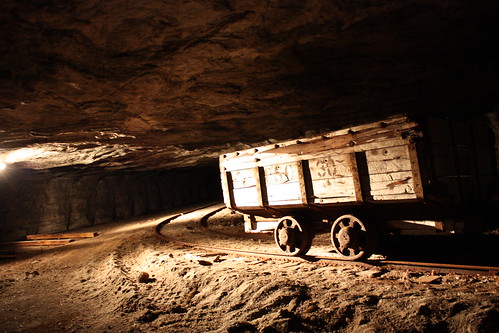 One of the old carts used for hauling salt. In the 1930s, a worker would get paid roughly 50 cents for an hour and a half of work filling one of these up.

When something broke, it was just left in the mine (and stripped for parts as the years went on). 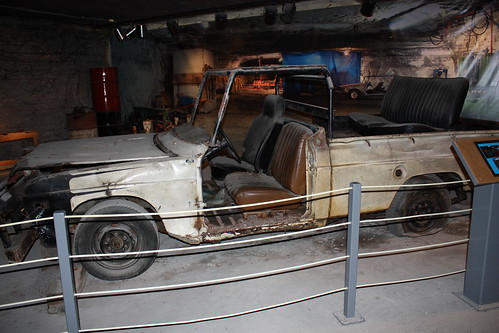 Realizing that doors and windows would be unnecessary in the mine (and would add extra weight), they were removed from this vehicle.

–
After enough time passed, everything became an artifact. Old cars. Now-defunct mining equipment. Even the trash of the past ultimately becomes a historical treasure. Eerie, sure, but fascinating, too.
– 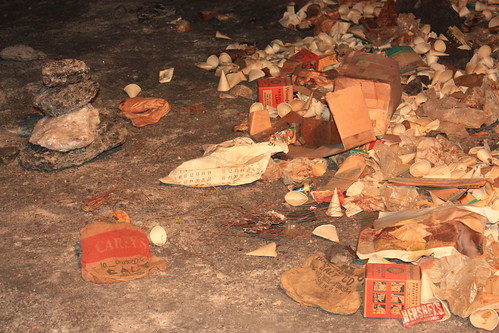 This trash pile dated back to the 1940s and 50s. Notice that Hershey's logo has not changed much. 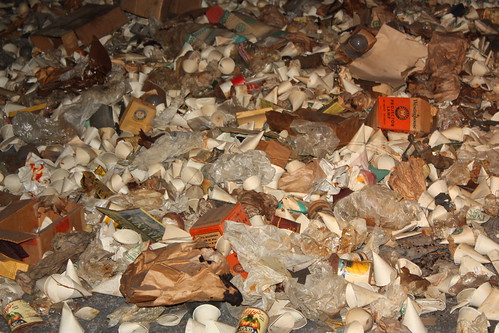 The old cans of peaches, the paper cones for water ... we literally marveled at old trash.

–
It’s funny: the notion of conservation and reuse, seems such a modern concept. But during the Depression, necessity spurred behaviors that can only be described as green. Jason was fascinated by this two-thumbed glove. When the leather on one side wore out, you could simply flip it around (the back of the glove now becoming the palm) and use it all over again. Twice the use out of basically just as much material.
– 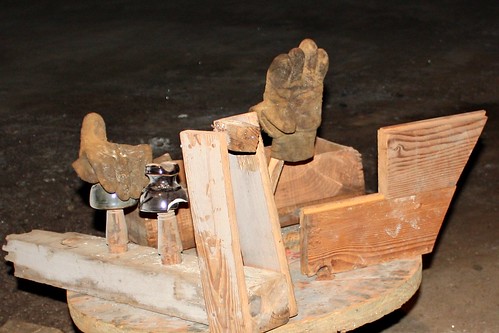 –
Oh, and since the fumes from all the vehicles in the mine have nowhere to go, all the vehicles run on diesel or bio-diesel (which is, essentially, cooking oil). Sometimes you have to go deep into the earth before you become earth-friendly.
The train carried us deep into the older parts of the mine (where I was convinced it would break down and leave us in the dark), before dropping us off at the front of Underground Vaults and Storage.  The same consistent temperature and humidity that so perfectly preserved pieces of trash and building materials within the mine has also made it ideal for storing fragile and valuable items. There are reels and reels of movies, props, and documents. I suspect if you dig around enough, you’ll find the Ark of the Covenant. Personally, I was just relieved to have overhead lighting.
Though UVS is not open to the public, a few pieces of movie memorabilia and props are on display (with permission from the owners). Most were from blockbusters that I had not seen.
– 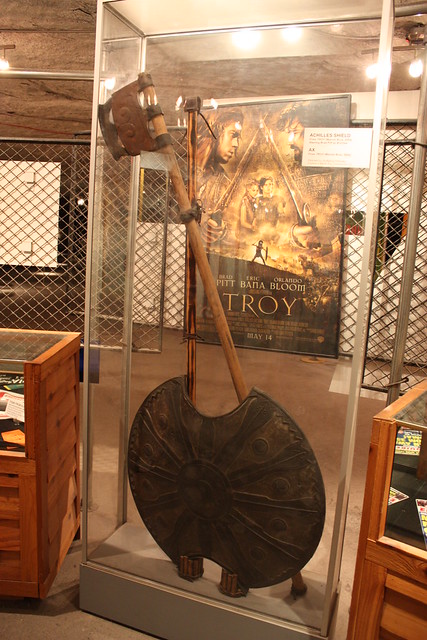 Fun fact: I was weirdly fascinated with Hector of the Shining Helm after reading Homer in college. Because I was that much of a dork.

It’s not that I’m above action films, mind you. It’s just that loud noises, chiseled abs, and actresses with button noses make me uncomfortable, and you apparently can’t have an action movie without those elements.

Fortunately, there was dorkery enough to appease even me. 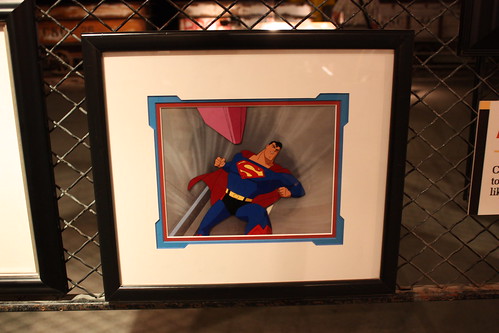 He IS Kansan, after all.

This would go GREAT with my life-size Keanu doll that I sleep with when Rand’s not around: 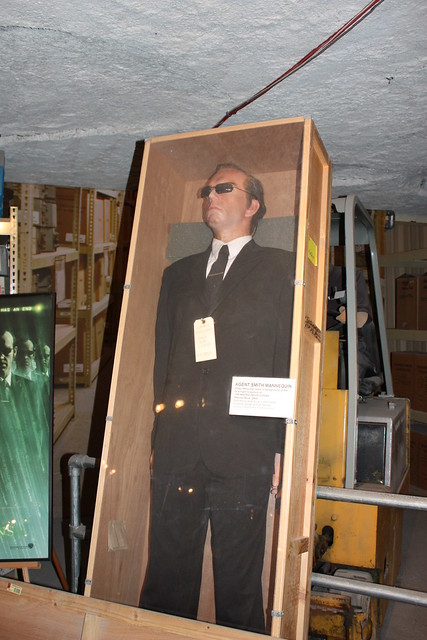 Remember when the Matrix franchise used to be awesome? Then the final film came out. Sigh.

I never saw the Batman movie in which George Clooney played Bruce Wayne, on account of my aforementioned fear of sculpted abs. AND BECAUSE IT LOOKED AWFUL. But I did get to see the suit he wore. 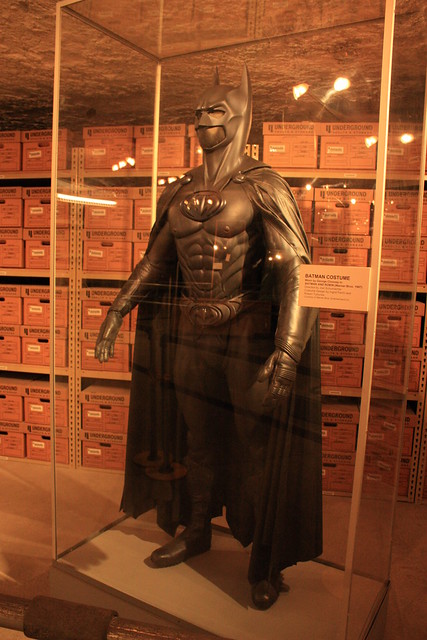 Oh, the crazy halcyon decade that was the 90s, when this actually seemed like a good idea.

And because I know my audience, here’s a close-up of the chestal region. Including, yes … NIPPLES. 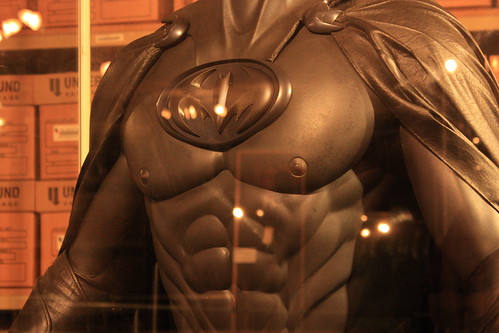 I tried to not look directly at the abs. The human body should never resemble an insect’s thoracic region. But the molded nipples? AMAZING. They should add them to everything, including furniture and airplane seats.

UVS also held rows and rows of film reel canisters, with the names of movies written on the side. I’m fairly sure these were empty and for display only, but it was still kinda neat. 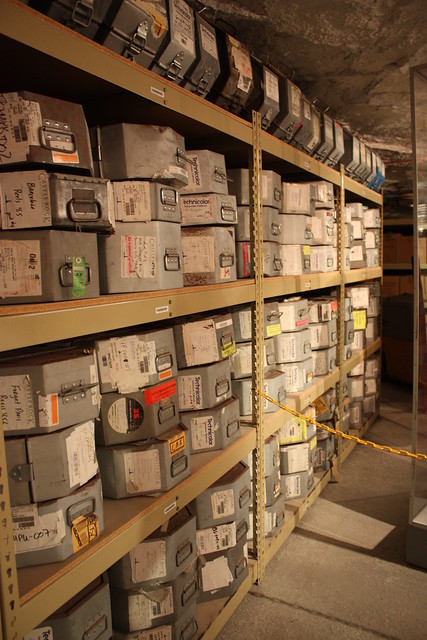 I was acutely aware of just how far we were from Hollywood at that moment.

And then I saw something so ridiculously random and delightful, it proves that the universe is interconnected and wondrous and has one hell of a sense of humor. Remember when, a few weeks back, my mind hazy from jet-lag and love, I might have claimed that my husband resembled James Dean? And I went off for 600 words or so about my love for the ill-fated movie star? I even noted that I was so crazy about him, I watched Giant. Which, in my 15-year-old esteem WAS AWFUL. Well, in Underground Vaults and Storage, far below the Kansas prairie, I saw this: 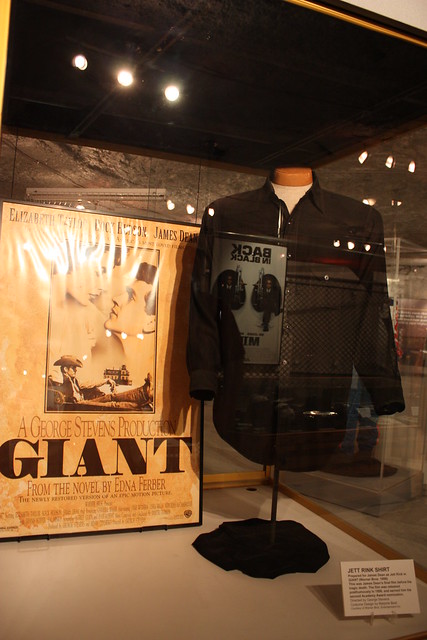 I may have laughed maniacally.

It’s JAMES DEAN’S SHIRT FROM GIANT. I positively lost it. It was not the red jacket from Rebel. No, of course not (the average person might actually be interested in seeing that). Nor was it the moth-eaten sweater he wore in East of Eden. No. Instead, it was that damn shirt from that damn movie that absolutely no one would care about but me BECAUSE I HATE THAT MOVIE BUT STILL WATCHED IT FOR JAMES DEAN. I derived no small amount of amusement from this.

In addition to the positively serendipitous collection of movie memorabilia, there was also a rather somber piece of history on display – the paper from the day after Lincoln was shot. 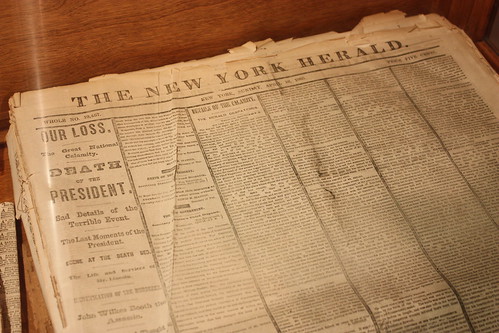 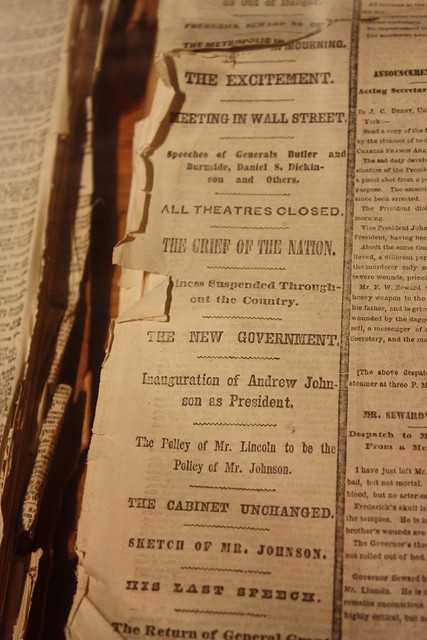 After Jason and I got our fill of history, we concluded with the Dark Ride. Not constrained by the old train tracks inside the mine, it was able to weave between the old and newer parts of the mine. This made it decidedly less creepy. 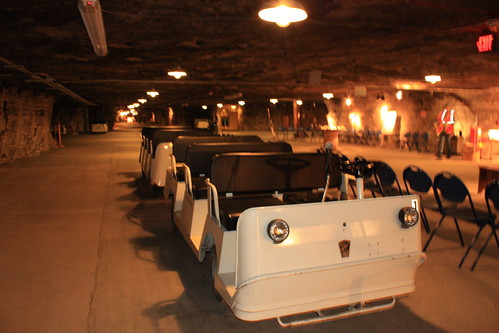 Right up until the driver drove deep into the mine, far from any of the overhead lights and noise of other museum-goers, and turned off the vehicle’s headlights. Someone gasped. Someone nervously giggled. I squinted. I waved my hand in front of my face. I could see absolutely nothing. I could have been in a huge mine, or in a coffin. There was no way of telling. She told us that supposedly your eyes never really adjust to it.

And then, blissfully, she turned the light back on and continued with the tour. 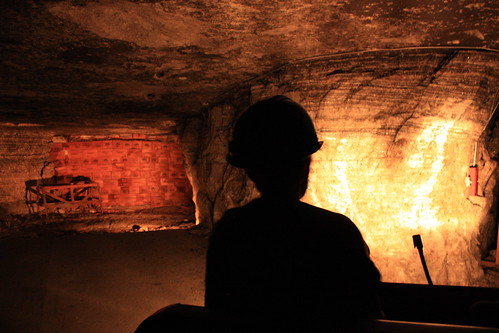 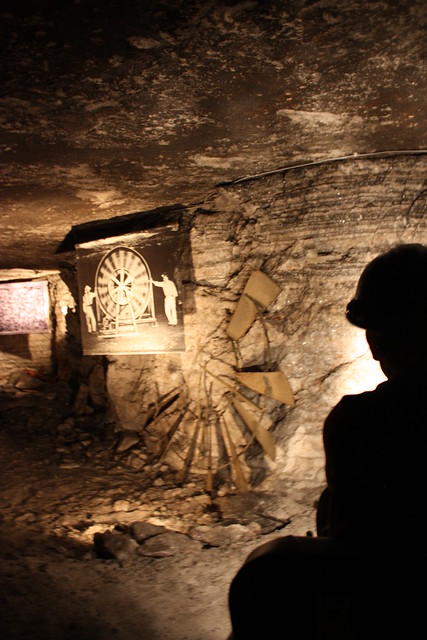 The remains of an old fan, once used to circulate air in the mine in decades past.

Eventually, they employed these large yellow tarps to close off portions of the mine and filter fresh air into the more-frequented parts. 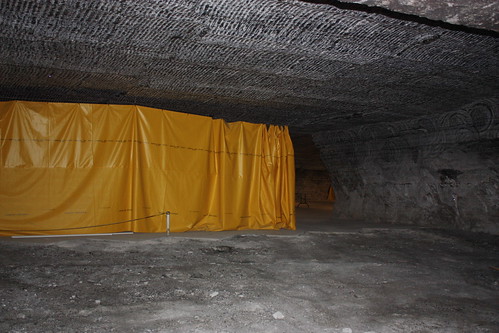 As the Dark Ride neared its end, I realized I, too, needed some fresh air. Jason and I took the next elevator up to the ground level. We fortunately didn’t have to wait long, but I suspect that a line might build towards the end of the day. 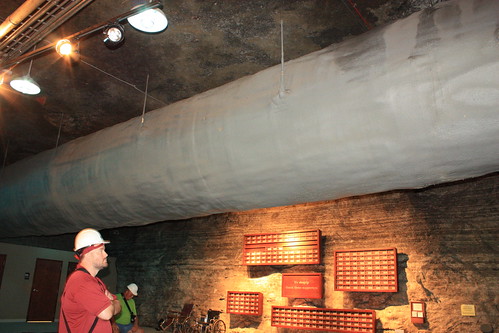 Jason, next to one of the enormous pipes that pumps in fresh air from the ground above.

The elevator ride back up was just as dark as the ride down, except for obnoxious tourists who kept taking photos. 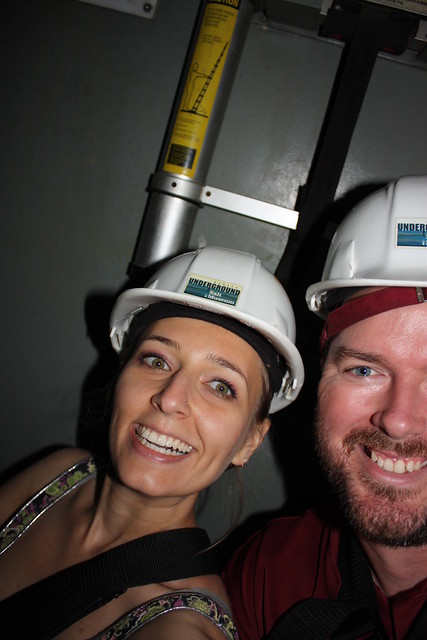 We rode up with one woman who expressed her relief at returning to the surface.

“I don’t like the dark. If something’s gonna get me, I want to know what it is.”

Words to live by, sure. But for an afternoon, we ignored them, and had a rather nice time.

A special thanks to Jason for taking me out to the museum and engaging in geekery with me (also, I totally assume no responsibility for the contents of his blog).

The Essentials on The Kansas Underground Salt Museum

Verdict: Recommended. I’d go on a particularly hot, cold, or otherwise miserable day, since the weather inside is a constant 68 degrees.

How to get there: the museum is located at 3504 East Avenue G in Hutchinson, not far from Wichita. A rental car is an absolute must, and unfortunately the museum is not well marked from the road. Most folks in town should be able to point you in the right direction.

Insider tips: Get the Salt Blast Pass so you can experience the Train and Dark Rides (and be sure to check the website for discounts and coupons). Hours of operation change seasonally. We saw positively everything in about 90 minutes. Reservations are recommended (and can only be taken by phone), but we didn’t have any trouble getting in without them. The museum is closed Mondays. Also, pee before taking the elevator down. Once inside the museum, there are only port-o-potties.

Nearby food: There’s no food or drink down in the museum, so you’ll need to eat before or after. For feel-good junk food, I suggest Bogey’s.

Good for kids: Children under 4 are not allowed, and kids who are very young or frightened of the dark might not get a kick out of it. But I’d say 3rd graders and up would have a complete blast (Jason and I did, and that’s about our maturity level.)