Note: This post was shaping up at over 2,000 words, which is just CRAZY PANTS. I think that’s longer than most of my college English homework assignments. As such, I’ve split it into two posts. So you’ll have to wait until tomorrow to see if we made it out of the mine alive (spoiler: we totally did.)

There are times is your life when you are asked questions to which there is only one correct answer. If someone, say, asks if you would like whipped cream on top, you say “yes”, regardless of what you’ve ordered. Really, there is never a time when “no” would be an appropriate response.

So naturally, when I was in Kansas a few weeks back, and Jason (my friend Christine‘s husband) asked me if I wanted to go to the Kansas Underground Salt Museum, I knew I had but one answer.

“UM, YES,” I said enthusiastically, and it was only after the words left my mouth that I realized I wasn’t entirely sure what an Underground Salt Museum was. I understood the individual elements involved, but was unclear on how they worked together. In this respect, it is not dissimilar to my understanding of the Spanish-American War. Or deep-fried ice cream (how does it not melt?). Anyway, I’m sure you’ll agree: both of those things would be improved with whipped cream.

Despite having no earthly clue as to what to expect at the Underground Salt Museum, I was giddy with excitement for several reasons:

What I did not carefully consider, and perhaps should have before agreeing (with such zeal!) to go to the Underground Salt Museum, was the fact that I am a bit of a claustrophobe, and spending an afternoon BENEATH THE SOIL LIKE A CORPSE might freak me out. But I soon convinced myself that everything would be fine – we’d probably just be a few feet below ground. It would be like spending the day in someone’s basement. Someone who really likes salt!

As with most things, I was woefully misinformed.

The museum, it turns out, is located 650 feet underground inside an actual working salt mine (in one of the largest rock salt deposits in the world). I realized this when were actually standing outside of the museum (which is located not far from Wichita, in Hutchinson – pop: 43,000). In other words, when it was waaaay too late to do anything about it. So I put on my best “I’m having fun” face, and vowed not to freak out. 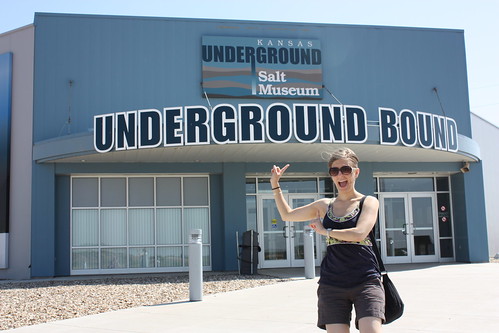 The day was so hot, I managed to get sunburned through my shirt during the 20 seconds I was actually above ground.

In the ground level lobby, we were ushered into a room to watch a brief safety video. The narrator explained that because we’d be entering a working mine, it was mandatory that we wear hardhats and carry breathing devices called “rescuers”. In the event of a cave-in, or release of noxious gases, we were instructed to activate the rescuer (by snapping a seal on the top) and hold it up to our lips. It would convert carbon monoxide to carbon dioxide, which is very thoughtful of it.

“The rescuer may become hot and burn your lips,” the video’s narrator said ominously, “but do not remove it from your mouth.”

Wait, WHAT? Rescuers and cave-ins were bad enough, BUT BURNED LIPS? I glared at Jason, and, ever the lady, delicately mouthed the words, “WHAT THE FUDGE?” (only, you know, I didn’t say fudge).

We soon found that the rescuers are a rather unnecessary precaution. There are no explosive or harmful gases in the mine, and no visitors or workers have been injured in its entire history. But after a few deadly cave-ins in coal mines, the laws on the books are that all visitors to any mine must wear a rescuer. Even if it’s a salt mine. The contraptions were about the size and weight of my camera (which is itself a beast). The trade-off of having to lug one around is that you know you’ll never have to use it (it’s the same reason I keep an inflatable raft and four cans of tuna in my car).

The elevator ride down to the museum is pitch-black, except for annoying tourists who keep taking photos and blinding everyone with their flash (HI!). 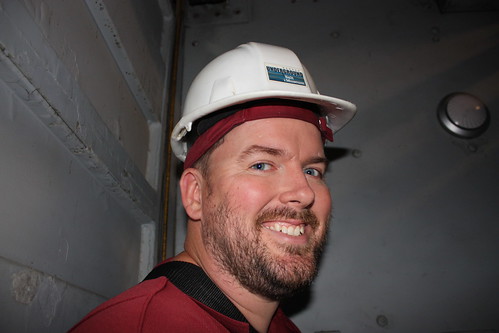 Pity this man. He was stuck in a mine. WITH ME.

Once inside the mine, we were hit with a blast of cool air. It is, without fail, 68 degrees and 40% humidity in the salt mines at all times. The museum had record-high attendance this summer, and I have trouble imagining that the weather was not part of the reason. Though a heatwave was searing the earth above, it was downright pleasant, being entombed 65 stories below ground. 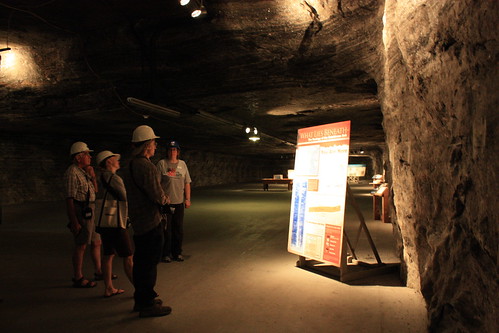 Everyone was staring at this sign, but in reality I suspect we were all just thinking, "Man, it is REFRESHING down here."

Surprisingly, I did not freak out. Sure, it’s underground and windowless, but the place is positively huge, there’s ample lighting in parts, and there’s groups of schoolchildren running around (if they were keeping it together, so could I). It helps to know that the mine is incredibly secure, and that Kansas has no history of earthquakes. Plus, as Jason noted, it would be a great place to be in the event of a zombie apocalypse, provided zombies can’t use elevators.

There were three separate entities within the mine: The museum, a secure storage facility (Underground Vaults and Storage or UVS), and the Hutchinson Salt Company (which is still operational). The salt in the mine is full of impurities (mostly slate and shale) and can’t be used for human consumption. Consequently we were told, rather repeatedly and to my sheer delight, not to lick the walls.

The majority of the salt harvested from the mine is used for de-icing roads in major U.S. cities (most of it went to Chicago) and a small portion of it was mixed into feed to provide nutrients to livestock (one of the guides took distinct pleasure in telling me this slowly and carefully, as though city life has made me ignorant to the eating habits of agricultural animals. Which it has. The last wildlife I encountered was a squirrel eating a french fry, which, to be fair, probably provided it with plenty of salt). 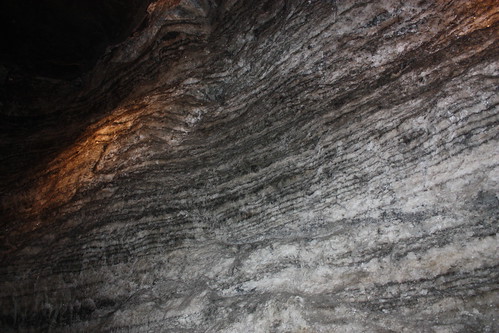 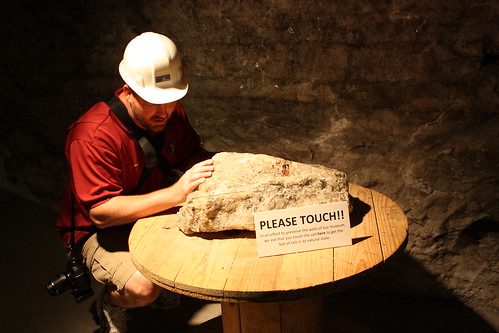 The mine is huge, and guests are encouraged to explore at will, with the warning that the museum closes at 6pm during the summer, whether you are still down in the mine or not. The staff explained that they did a last minute sweep of the area, and that to their knowledge no one had ever been left down below overnight (“…yet”, I kept adding in my own mind.) 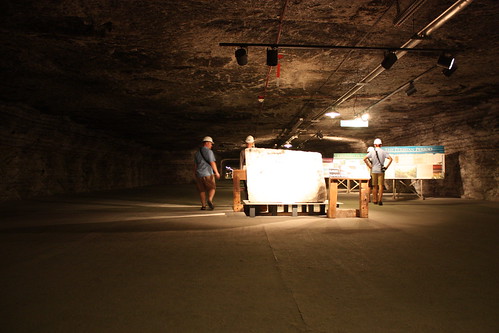 And so, with this one guideline, we were free to do as we pleased, which turned out to be this: 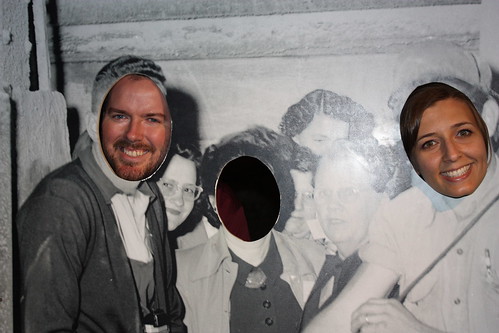 Jason, me, and good-old hole-faced Roberta. 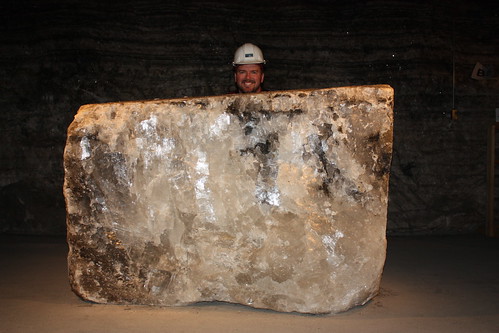 Thanks to the high ceilings, the lighting, and the inherent goofiness that is Jason, I was actually having fun. I, the woman who is still kinda-sorta afraid of the basement, was 65 stories below ground and was having a delightful time. 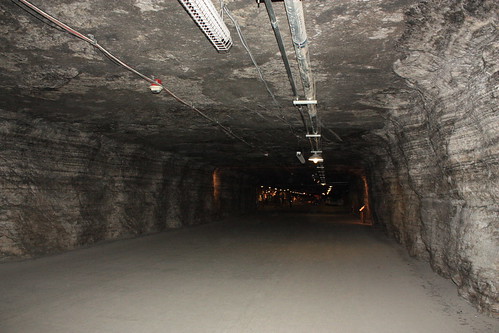 Creepy can be enjoyable!

Of course, we’d only seen one small portion of the museum. The tours were next. Things were about to get exponentially spookier, far below the Kansas prairie.

Tune in tomorrow for the exciting conclusion of my visit to The Kansas Underground Salt Museum!