I am jumping around in time, because I can’t let another day go by without telling you about Peru. My tales from Florida, from New York, from Philly (including the best cupcake I have ever had),  and from our road trip to Ashland will all have to wait.

Our trip to Peru was one of contrasts. We landed in Lima and spent a few days there. Our hosts were gracious, and people were absurdly friendly. Even the cabby who ripped us off (yes, there was one) though a liar and a cretin, was not that much of a jerk. It felt remarkably safe, and people seemed to be enthused – or, at least, not thoroughly annoyed – by tourists. It was a delightful change of pace.

I found the city to be at a crossroads – both striving to preserve its past and ready to launch into the future.

We visited Huaca Pucllana, an ancient ceremonial spot dating back to the 5th century … 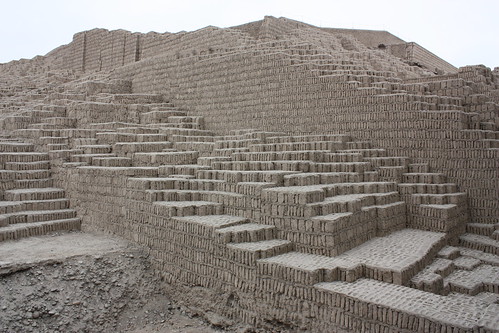 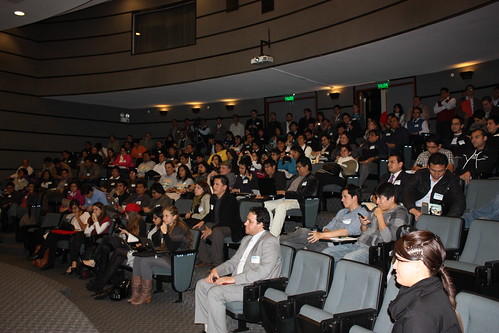 I struggled through with my mediocre Spanish, but the extreme hospitality and friendliness of many people I met made it easy to get by. I had a Spanish phrasebook with me – one so absurd, that it served more as a conversation piece than anything else.

“I do not think you should use some of these phrases,” a Peruvian colleague of my husband suggested. “While it is Spanish, these aren’t things people say.”

And while I’m sure he’s right, I can’t believe I never had the opportunity to ask, “How much is this table?” and “Can you please leave? I have an early flight in the morning.”

From there we headed to Cuzco. High up in the Andean mountains, I sat in the lobby of a posh hotel, sipping mate de coca – a tea derived from leaves of the coca plant (yes, that plant) that’s been consumed by locals for centuries to combat altitude sickness. We ate traditional cuisine like llama and cuy (guinea pig) in a swank Italian-Peruvian fusion restaurant. We took two tours – an expensive one that included fantastic food and a cozy train ride to Macchu Picchu, and an absurdly cheap one that took us through mountain villages on bumpy roads. 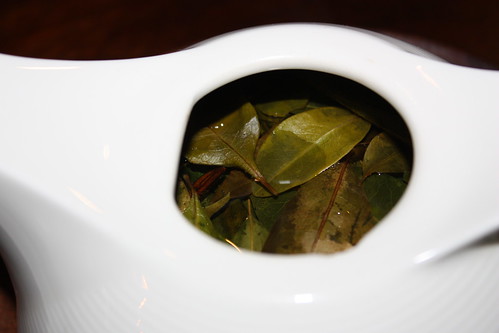 Mate de coca. It tasted a lot like green tea.

We spoke to tour guide who told me that he chastised Spanish tourists whenever he got them (“They don’t like me very much,” he said), and that many people in Peru felt similarly to him. But when I asked what the predominant religion was, he looked at me as though I were nuts.

“Catholic,” he said. Obviously. Hate the Spanish, but keep their religion.

The contrasts of the country followed me everywhere. I expressed concern about the poverty of the villages, and yet found myself haggling over what would amount to a few dollars or cents.

And then we went back to Lima, and back home.

While I had one of the best trips of my life, I spent more than one night crying in my hotel room (in case you weren’t aware, this is what privileged white women do when faced with worldly problems like child labor and teenage pregnancy. We cry in our hotel rooms at night, and then we feel better because HEY WE CRIED SO WE OBVIOUSLY CARE and then we can go back to doing absolutely NOTHING to make the world a better place and not feel guilty about it).

It was my first time in Peru, and my first time in South America. And while I felt like I returned home with my eyes slightly more open, with my mind slightly more aware of the goings-on beyond my borders, I feel it pertinent to note that this photo was among those I took during my trip. Despite everything I saw, it still makes me cackle like a madwoman. 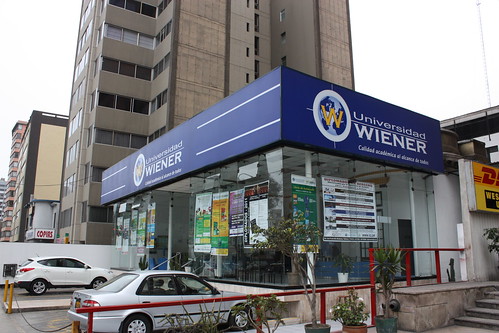 That’s right: Wiener University. I’ve got to hand it to Peru: it made me laugh, it made me cry, it made me think (and then it made me not think). There’s little else you can ask of a destination.