To the little blond kid on Alaska Air Flight #232,

It seems we’ve gotten off on the wrong foot.

I see this as largely your fault, of course. When you saw me quietly sleeping in my chair, you – for reasons that defy logic (Was it curiosity? Thoughtlessness? Demonic possession? I’m leaning towards the latter) – decided to shake the back of my seat vigorously until I woke up.

Now, I’m not one to claim I’m a heavy sleeper. I’ve been woken up by the ticking of a wrist watch before. But kid, I was out. I’d just spent days with my family, who conveniently live under the San Diego airport flight path in an uninsulated bungalow that shakes and trembles every time a plane screeches overhead. Not only will any sleep you get will be in fitful anticipation of the next arrival or departure, but, to add insult to exhaustion, some members of my family wake up at ungodly hours. Kid, did you know there was a 5 am? And that my uncle is almost always awake for it? And, for reasons that escape me, REARRANGING DISHES IN HIS KITCHEN?

Even at your tender age, little blond kid (what are you, eight? nine? At what age are children too old to be considered adorable, but still sticky? Because that’s where you are), I hope you realize how effed up it is for my uncle to be unloading the entirety of his china cabinet before the sun has dared shed light on our corner of the planet.

Between the earth-shaking boom of the planes and the antics of humans under the delusion that they are roosters, by the time Rand and I headed home the day after Thanksgiving, I was knackered.  Exhausted. You can imagine my relief when I found out we were upgraded. Even though we spend roughly 1/3 of all our waking hours in airports, first class is something that eludes us. It is a rare treat when I find that we have plush leather seats and a snack available to us. The second we started to ascend, I was out. Ironic, when you think that this same plane probably woke me up earlier this week.

What’s more, I was having that really good dream I have. The one where I’m at a thrift store, and all the expensive clothes I’ve ever wanted are there, and they’re barely used and super cheap and they’re all in my size! And I get to fill my cart up and the total for all my purchases is something like $15. It’s glorious.

What’s that? NO, it is NOT a stupid dream, KID. And no, it does not suggest that I am materialistic (who the hell taught you that word, but failed to teach you the basics of living in our society? WHO?). It just means that I love a good bargain! It is a wonderful dream, and you woke me from it, just as I was trying on that Madewell jersey blazer that I’ve wanted for months. What’s worse, you did so by shaking my chair like an epileptic in the throes of an orgasm ( … okay, you are far too young for me to have said that. But if your parents let you roam freely around the cabin like an aerial version of Lord of the Flies, I suspect you’ve heard worse.)

Kid, do you know what it is like to be woken up on a plane by being shaken violently? I’m not a nervous flyer, but I was hurled from the golden dew of sleep gasping, convinced that this was, in fact, the end. I was going to die in a hideous plane crash on the day after Thanksgiving, and no one in my family would be able to eat turkey again without weeping (or so I like to think).

Instead, I found, to a mix of relief and annoyance, it was not my imminent doom that woke me, but you. And as I stared at you with bloodshot eyes that sought for an explanation, you merely stared at me, and then proceeded to sneeze in my face before marching up to the front lavatory. You slammed the door shut, did your business, and when you can back down the aisle, you glared at me.

Rand, unaware of what abuses you’d inflicted on me before saw only your face and noted, “Man. That little kid just gave you the look of death.”

Later, when I myself heeded the call of nature, I’d discover that someone had given the bathroom floor a fresh misting of urine. In the interest of fairness, I will allow that it might not have been you, kid. It may have been the gentleman sitting across from me who is at least 50 years of age. But given that he has at least 40 years more experience peeing in toilets than you, I suspect it wasn’t him.

All of that is behind us, now, little blond kid. You returned to your seat one row behind me, next to your exhausted, dozing father. I considered for a brief moment waking him up in the same manner you did to me, but decided to let him sleep. He’s dealt with you every day for the last decade or so, and will deal with you every day for another decade. He needs his rest. 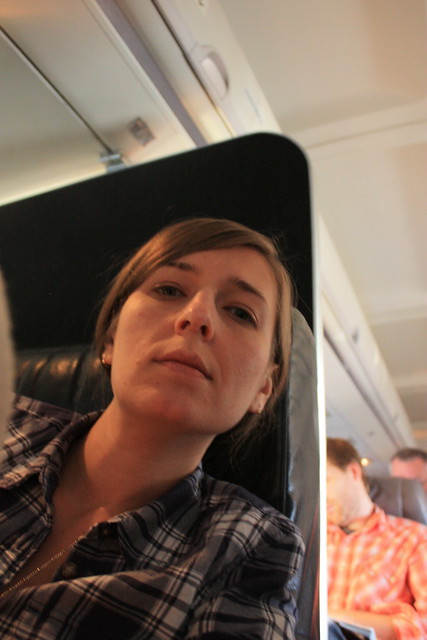 A very cranky Everywhereist (foreground) and the sleeping father of the demon child (background).

But while I did not voice my frustration to your father, I still felt it, kid. I was exhausted, yet my body was coursing with the adrenaline that had been released when I thought we were plunging towards the earth (as an aside, having a bunch of adrenaline in a situation like that WOULD HAVE BEEN HELPFUL HOW?). And then something happened, kid, that made me forget all of that.

After we had landed, and we all were waiting to get off the plane, I heard sobbing. I turned around, and saw you wailing – absolutely wailing – while your dad attempted to comfort you. Apparently you had been jabbed in the eye by something (it may have been your little sister, your own fists of which you CLEARLY have no control, or the swift hand of fate. Whatever.) and were in hysterics.

I stared at you, kid, while you sobbed, and I actually felt sorry for your little demonic self. Because no matter how evil we are, how often we shake awake poor, exhausted strangers who have done nothing to us, we’re still human. We’re still squishy and mortal and we need sympathy and love.

Looking at you, kid, I understood this notion. And seeing your exhausted father try to comfort you, I knew that one day you’d understand it, too: that even the most obnoxious of us is fragile and delicate and needs to be hugged and comforted.

So here’s to the less shitty person you will one day be, kid. Until then? Cover your mouth when you sneeze, learn to aim your urine stream, and for the love of all that is holy, don’t wake me up unless the plane is actually crashing.

Actually, you know what? If we are going down, just let me sleep. Thanks.