Thanksgiving is tomorrow, and it is with no small measure of shame that I realize I haven’t even talked about Halloween. Or last summer, for that matter. I’ve fallen so behind on my blog I’ve become unstuck in time. So much so that I didn’t realize how bizarre this next photo was. I came across it while going through a set of pictures from a trip to New York and New Jersey. 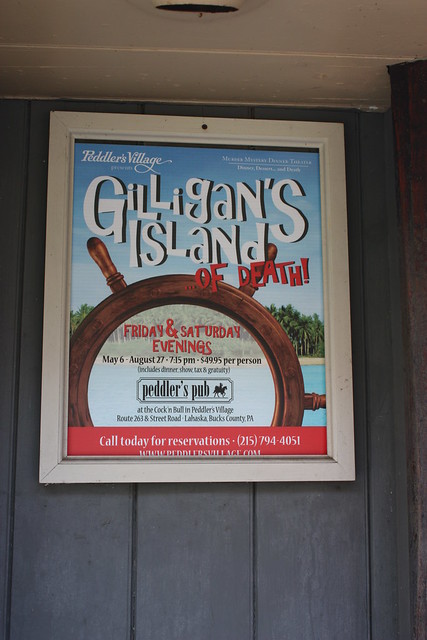 Naturally, I’m intrigued by the premise. Watching a dinner theater show called Gilligan’s Island of Death sounds like a great way to spend an evening, and not just because I always kind of wanted the Skipper to choke Gilligan for ruining their chances of salvation YET AGAIN (I only hope the food is on-theme – plentiful seafood entrees and a slice of coconut cream pie to finish it all off?). I figured I must have taken this photo in September or October – and that the show was intended for Halloween, right? Nope. Not all. Look closer at the dates. 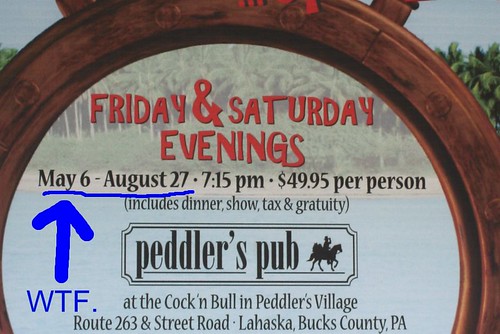 Because May to August is really the spookiest time of year in the Northeast.

A creepy horror dinner show that runs from MAY TO AUGUST? Does the entirety of Bucks County has some sort of seasonal jet-lag? (Because if so, I totally understand. This year, summer did not come to Seattle).

For some reason, the elaborate Christmas displays that have already gone up, and the 12-decibels-too-loud holiday music that’s currently being pumped into every public space in America suddenly doesn’t seem so strange. In the spirit of the season, I’m going to go hang some mistletoe, dye some Easter eggs, and pass out candy to trick-or-treaters. Because, really, I have no idea what’s going on anymore.

And with that, Happy Thanksgiving, folks. Don’t eat too many of those candy conversation hearts, okay? You’ll get a tummy ache.