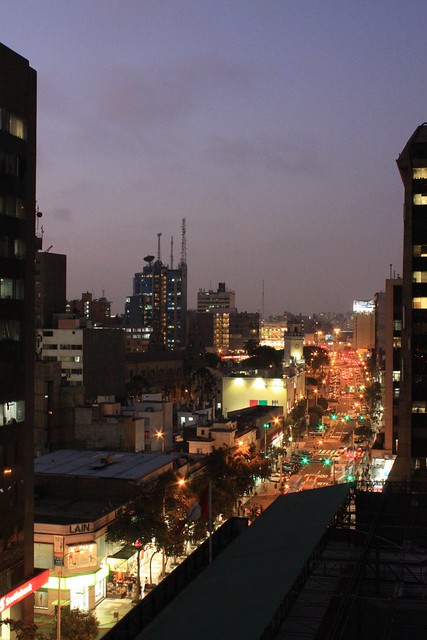 –
Haggling is an art form, and my mother is Picasso. Analyze her technique too closely, and it will fall apart, but stand back far enough, and a masterpiece emerges. I’ve seen her haggle in retail stores. RETAIL STORES. With success. She will take an item up to the cashier and note that a thread is coming loose – would they mind giving her a discount? Or she’ll point out a popped button, a fraying hem (all things which she can fix in a matter of moments) and ask for a ludicrous percentage off.

AND SHE WILL GET IT.

I thought about her a lot when I was in Peru. Not only is haggling a way of life down there, it’s institutionalized – nothing seems to have a fixed price. Not even the cabs. That’s right: you haggle for cab fares in Peru. None of the vehicles have meters. You simply talk to a driver and negotiate the price before getting in.

For me, this was incredibly nerve-wracking. I didn’t inherit my mother’s knack for seeking out a bargain. I tried once to get a deal on a sweater that was – I kid you not – coming apart at the seams. The cashier offered me 10% off. I stared at her blankly before putting it back on the rack. My mother would have been paid to take it off the store’s hands.

I’m just no good at fighting over money. I hesitate to even point out when I’m overcharged for fear of an embarassing exchange with a store clerk. And besides all of that, my Spanish is not perfect. Not even close. In Italian or English, I’d be fine. But how on earth was I supposed to tell a Peruvian cab driver that I knew he was charging me too much when I could barely speak the language?

Miraculously, I managed to do it. Here are the lessons I learned from my week of hailing and bargaining for cabs in Peru – both in Lima and Cuzco. Hopefully it will come in handy if, like me, you lack my mother’s amazing bargaining skills.

I’m pleased to say we only got really ripped off once. The hotel driver told us that the destination was far away, and the trip would cost 20 soles ($7 U.S.). I told him that seemed unreasonable but he insisted that it was very, very far and unwalkable. I gave in, and he proceeded to drive us a few blocks away. I was infuriated, and tempted to scream at him (while I’ve forgotten most of the Spanish I’ve ever known, I’ve committed to memory choice words like “thief”, “liar”, and “son of a bitch”. I am slightly concerned as to what this says about my personality) but thought better of it when I realized IT WAS ONLY SEVEN FRIGGIN DOLLARS. That’s the thing to remember about Peru – even when you are ripped off, you’re still getting a pretty good deal.

And hey – it’s waaaay cheaper than the cabs in Bulgaria. But still – next time I go to Peru? I’m taking my mom.