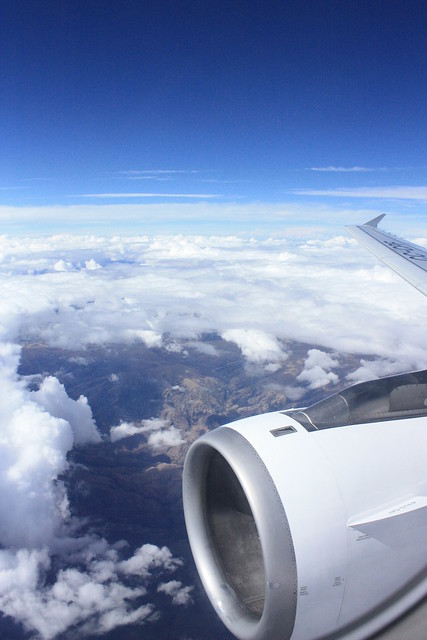 Flying out of Cuzco, back to Lima.

With the exception of my thighs and derriere, I am not what you would call a hearty girl (though those two parts of me could survive drought, famine, pestilence, and probably a nuclear war. Everything, really, save for another season of skinny jeans). But excluding my well-developed lower region, I’m kind of wimpy. My arms aren’t particularly strong, I have a small waist, I’m prone to migraines and colds, and I’m constantly suffering from motion sickness (just the sheer number of other illness-related posts I was able to link to in that last sentence should convince you of my alleged frailty).

Naturally, I was more than a little nervous about traveling to Cuzco. At an elevation of 11,000 feet, altitude sickness is almost a given. When we first arrived at the airport, there was a rather graphic poster warning visitors of this fact. It featured a larger-than-life image of a tourist vomiting on his own feet. Sadly, I did not take a photo, but here is my artistic rendering of it: 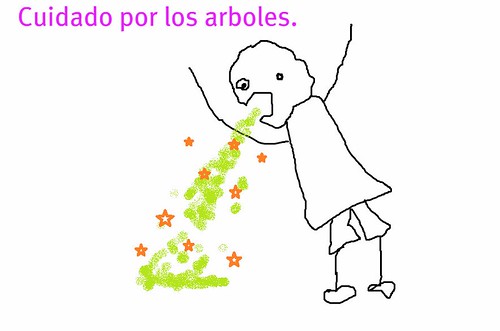 I can't remember the warning they had in Spanish, so I just put "BEWARE THE TREES."

I am pleased to say that no one in our party took it upon themselves to recreate the scene above. We did have to deal with a good measure of light-headedness and nausea, and here’s how we did it:

We gave ourselves plenty of time to acclimate to the altitude. We arrived into Cuzco on a sunny afternoon, and had that entire evening and the whole next day to get used to the elevation before we headed to Machu Picchu (which is at a far lower elevation). We took our time and didn’t rush things. When we first stepped off the plane, we felt okay – a bit short of breath, and a bit light-headed, but okay. After a little while, dizziness set in, along with racing heartbeats, and for a few of us, nausea followed. After three or four hours in Cuzco, Rand was feeling like this: 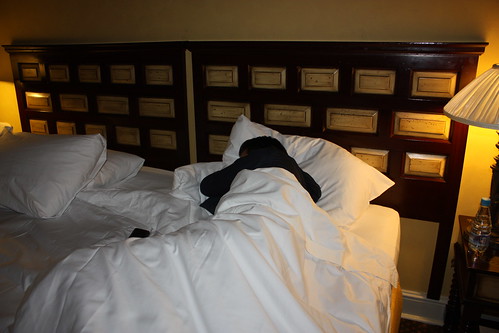 But after a solid night’s sleep he was feeling fine and eating cheese-filled empanadas he bought off some random dude in the village of Pisac:
– 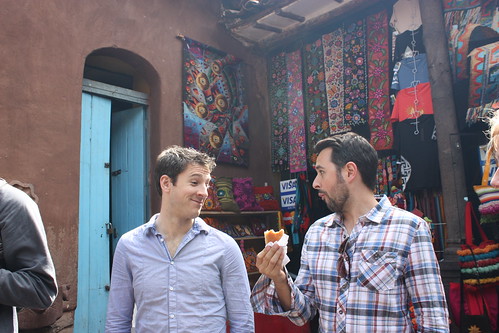 I love Tom's face in this pic. It just screams, "BEWARE THE TREES." Fortunately, Rand was fine.

So when all else fails? Don’t hesitate to nap, or at least lie down.

For those of you who wish to stay conscious, one of the best ways to combat altitude sickness is coca tea (or mate de coca, as it is known in Peru). The stuff  is amazing. This is an odd thing for me to say, given that I’m so paranoid about narcotics that I no longer take Sudafed now that you need two forms of I.D. and a blood sample to buy it in my home state of Washington (better than Oregon, which requires you to have a prescription from a doctor and a copy of your original high school transcript, as well as letters from three of your neighbors stating that you are not, in fact, a meth addict, and that you just have a cold).
– 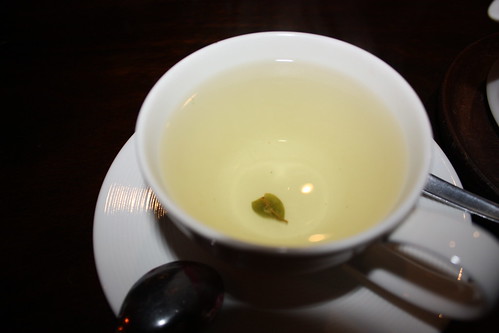 I thought someone from the DEA was going to tackle me just for taking a sip.

But coca leaves aren’t cooked up in some sketchy backwoods meth lab. They grow directly from the ground, and they’ve been consumed in Peru for ages to combat fatigue and altitude sickness. Nearly every hotel you go to will offer you a complimentary cup or three, and it’s on the menu at restaurants all over town. The taste is grassy and herbaceous, not unlike a green tea. I didn’t even notice any buzz from drinking several cups – it was literally milder than a glass of coca-cola, which I found amusing.

If you aren’t a tea drinker, there are also coca toffees, which I found delightful but a bit gritty (incidentally, this is exactly how I felt about Jack Palance). Though I now crave these candies fortnightly, I don’t really think that’s because they’re addictive – I think it’s because I just really like sweets. I’m pretty sure these are a big reason why I fared so darn well in Cuzco. Sick as though I usually am, I was fine.
– 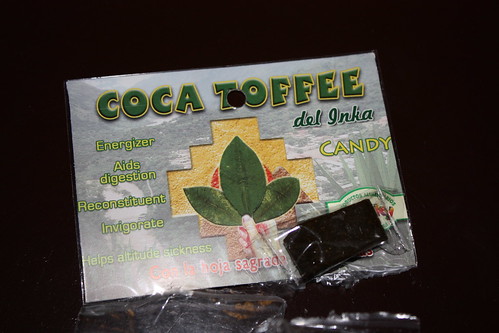 They were an incredibly dark brownish-green. Incidentally, after munching through two-packs, so was my pooh.

(One word of warning: if you do partake in either the tea or the candy, you might fail a drug test in the weeks following. Yes, I’m serious.)

One thing we all noticed when we got to Cuzco, which may not have been directly related to the altitude, was that our stomachs were feeling a little off. As one person put it, “things were flowing a little more freely than usual.” Okay, fine – it was me. I said that. In reference to my BOWELS. It wasn’t severe – no one was really sick or in gastrointestinal pain or anything like that. We were just using the bathroom a lot and wondering exactly what to do with our toilet paper in the aftermath. The solution to that, as well as to altitude sickness in general? Chug plenty of water.

We found that having a full stomach also helped (if you are light-headed already, adding low-blood sugar to the mix is a bad idea). As usual, I choose to battle all feelings of nausea or illness with pastries. Our hotel definitely aided in this fight: 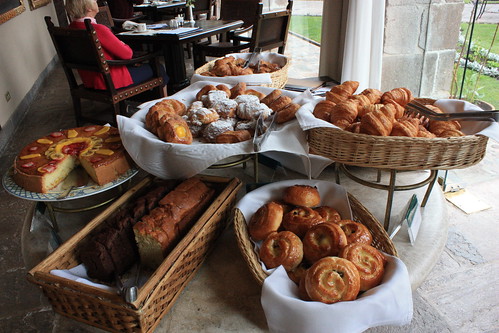 Me, to Rand: "Send for my things back home. I am never leaving."

If pastries aren’t your thing (they are certainly mine – VIVA THE BUTT!) then you can also try munching on these little dried corn snacks that are all over Peru. They tasted kind of like dry, bland Fritos (I’m totally not selling these, am I? I can’t believe I used to be a copywriter). I was the only one who really dug them. Rand thought they tasted like dust, but then again, so do Saltines, and look how well those work.
– 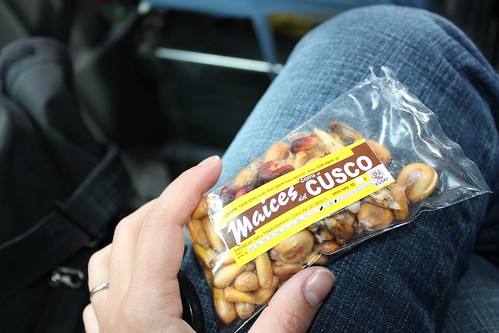 Oh, and one last thing to be wary of while hanging out in higher elevations: it takes far less to get drunk, or even tipsy. If you do choose to drink, know that your tolerance will be half to a quarter of what it usually is, and follow it up with plenty of water. Also, you might want to make sure that no one around you is sober and wielding a camera. Otherwise, this might happen: 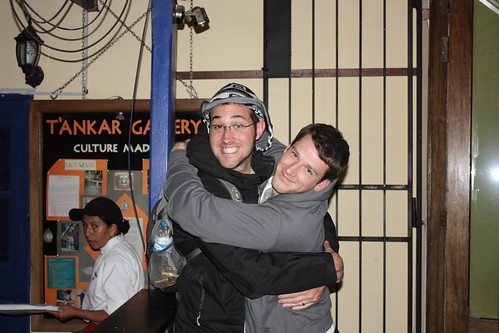 I love the look on the face of the woman in the background of this picture.

Of course, that’s just the risk you take when you travel, particularly to places in high altitudes. On the plus side? The view usually makes it all worth it: 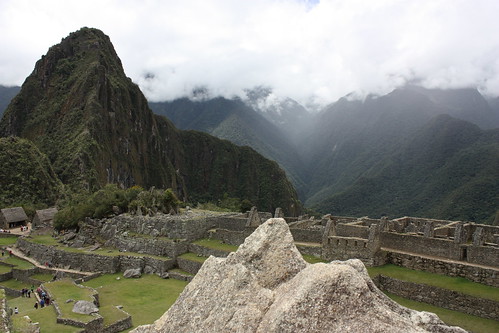 So heed my advice. Stay hydrated, get plenty of rest, and have some hearty, carb-filled meals. And beware the trees, of course.