This week’s WTF Wednesday takes us to an open-air market in Barcelona. A few weeks ago, I found myself there with Rand and his coworkers Joanna and Kenny. (Here is a photo of them, posing for there as-yet-unnamed, un-recorded, and un-released first album.) 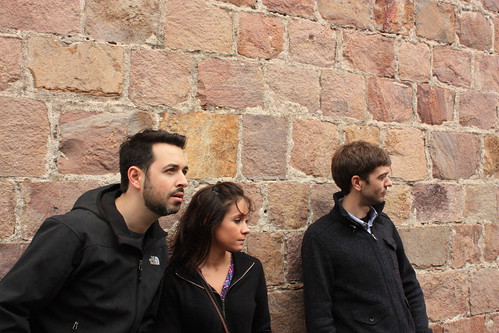 –
Having imbibed one-too-many aguas sin gas, I left the three of them outside the market, in front of a plant nursery, while I popped into a bathroom. Though none of them spoke Spanish, I figured they’d be fine for a few minutes without me.

Famous last words, if ever there were any.

When I returned, I found them excitedly snapping pictures of a creature that was hovering around a lavender bush, while an older woman was speaking to them brusquely in Castellano.

“Honey, look!” Rand said, pointing to the unidentified flying object as it flitted from flower to flower. “It’s a hummingbird.” 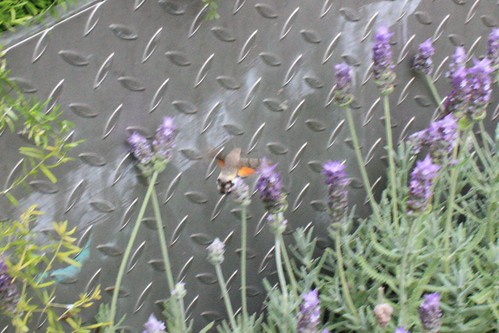 The woman continued to frantically speak to us. My Spanish isn’t great, but I understood the one word she kept repeating again and again – “pica.” When I had visited Spain during a school trip in high school, my host father had used that word to describe spicy food. “Pica.” To sting.

“What she saying?” Rand asked me.

“She saying that this bug,” I said, pointing to the insect that zipped around the plant, the one my husband and his colleagues had gravitated around, “will bite us.”

Now, for the record, my husband, Joanna, and Kenny are pretty damn sharp. However, given the speed that this sucker was moving, and the woman yelling at them in a language they didn’t know, at a quick glance, it would have been easy to confuse it for a hummingbird.

But I’ve seen hummingbirds before in my aunt’s garden in Southern California. They take off the second you approach. Their beaks don’t curl up into a proboscis when they’re done feeding. No, this was something else. This was … well, at the time, I didn’t know. Rand had taken a few photos, but they were too small to make out anything.

It wasn’t until last night that I finally uploaded my photos from the trip onto my laptop, and was able to get a better look at the creature in the photos. Here it is from a distance:
– 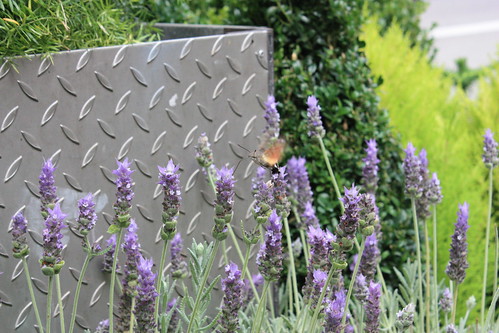 It looks rather innocuous from this distance.

And here’s a close-up: 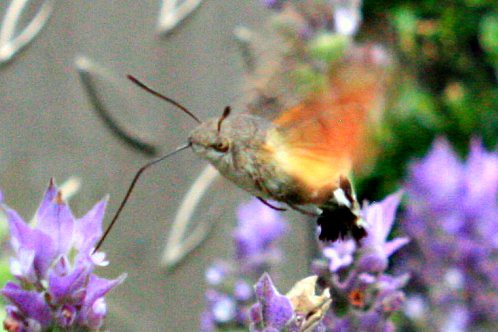 GAAAAH! KILL IT WITH FIRE.

Err, sorry. I need to remember that it’s just a photo. But still. Rand, Kenny, and Joanna were mere inches away from this thing while the woman was yelling at them to move back because its bites stung like hell, but none of them understood. I am horrified just thinking about it. After researching it a bit online, the best I can figure out is that it’s a hummingbird hawk moth – a type of moth native to Southern Europe.

Now, I know that knowledge is power and we only fear the unknown and blah blah blah. Knowing what this creature was should have made me exponentially less scared of it, right? Sure, PROVIDED WE HAD NOT BEEN DEALING WITH A MOTH.

I detest moths. I don’t mind spiders or caterpillars or beetles, but moths are the single most horrifying thing, EVER.

Years ago, back when I was in college and living in a studio apartment, I decided to take a shower after a particularly long and stressful day. As I was sweetly minding my own business, I noticed a moth near the window. It was roughly the size of game hen. I breathed deeply, determined not to run screaming across my tiny apartment while naked and dripping wet. My solution? I’d ignore the moth. It would stay where it was, and I would stay where I was, and everything would be fine. I wouldn’t even look at it.

Except that I did. I kept peering back at it, to make sure it was still where it was UNTIL I TURNED AROUND AND THE MOTH WAS GONE AND OH GOD WHERE IS IT SWEET HEAVENLY FATHER IT’S ON MY THIGH.

My shrieks echoed down the hall of my building, and had my neighbors not been ineffectual stoners I’d like to think that they would have called the police.

Thankfully, my most recent encounter with one of these godless creatures (because clearly they were designed by Satan and don’t YOU DARE TELL ME OTHERWISE) ended rather well. BUT STILL. I had left Rand, Joanna, and Kenny alone for less than 4 minutes. In that time, they managed to find not only a moth, but one that leaves bites which are roughly as painful as a wasp’s.

Seriously. WTF. I can’t even look at the photo without shuddering. Me. The girl who eats guinea pigs. Reduced to a sniveling mess by a photo of a moth.

Sigh. At least one thing is certain: I am never, ever going to forget the meaning of the word “pica.” And I suspect that neither will anyone else who was with me that day.