My head is a little scattered right now.

I just unfriended a young man on Facebook who I’ve known since high school. He was always a fun guy – clever and hilarious and really a joy to be around. I unfriended him because a comment of his on one of my posts left me so angered and so hurt, I simply didn’t want to deal with it or him. Perhaps it was impulsive of me. Perhaps I overreacted. But I’m of the mind that if we haven’t talked for a decade, then you don’t have the right to hurt my feelings.

It’s gotten me to thinking about how much things change. I don’t think that in the entire time I knew this young man in high school, he ever upset me. Not once. And in a few seconds, through the ether of Facebook, he did (to be fair, I likely upset him, too). Life is not static. People change. Technology advances. In another decade, we’ll be offending each other on a social network that has yet to be invented.

“Gah! I’m never talking to Rob again. He didn’t respond to my Flurblrrrr request. Can you believe the nerve of the guy?!”

I know it’s trite and silly. But it’s left me feeling a bit sad. And nostalgic.

Years ago, when Rand and I were newly married, and driving back to Seattle from our wedding in Oregon, we stumbled upon a small antique shop in Astoria. The antique shop sadly yielded no maps leading to One-Eyed Willy’s treasure, but it did have old postcards of Seattle Center from the 1960s. I bought a handful of them, and today I finally got around to scanning them into my computer. As I looked through those decades-old images of my town, next to photos that I took just a few years ago, I’m struck by how much things have changed. And how much they’ve stayed the same.

People still cluster around the International Fountain, just like they used to. 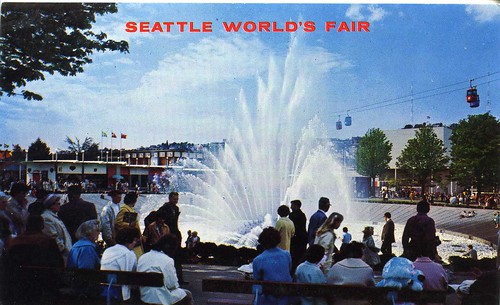 Someone please tell me why we don't still have the sky gondolas. 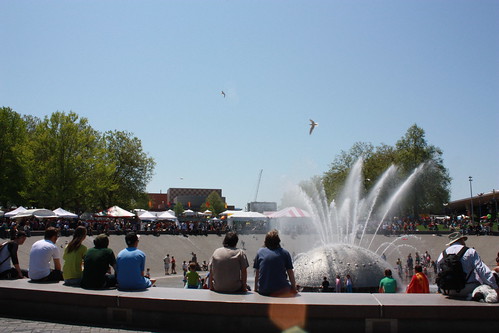 And the Pacific Science Center is virtually unchanged from how it looked fifty years ago. 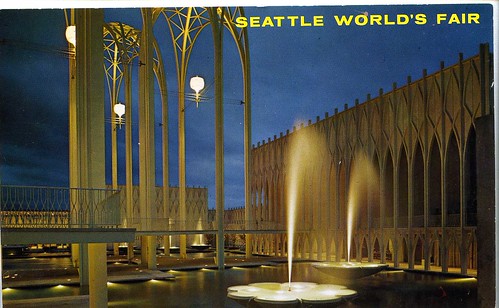 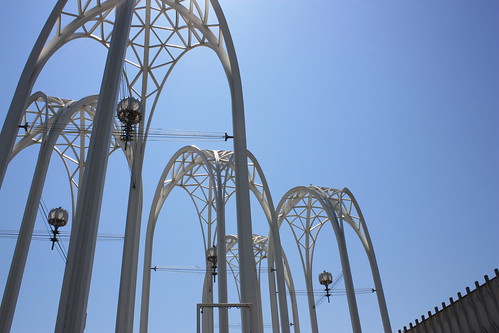 The arches are still as they were, bone-white fossils from an earlier time.

Other places, though, are unrecognizable. The structure shown in the front of this picture is no longer there. Were it not for the arches in the background at right, I’d have no idea where this was. 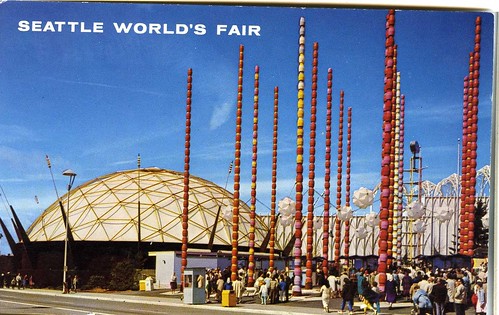 One of Rand’s favorite bits of trivia about Seattle is this: the population of our town, since 1960, is virtually unchanged. It was roughly half a million then, it’s roughly half a million now (the surrounding areas, though, have grown substantially). Obviously, it doesn’t mean Seattle is the same place it once was. People moved into and out of the city. Some died. Others were born. Even those that remained here for the last fifty years aren’t who they once were. They’ve changed. Grown older. Gotten new hair styles. Changed their political affiliations. Gotten new friends. And lost old ones. I suppose that’s just how it goes.