Last week, I found out there was a trailer for Wes Anderson’s new movie, Moonrise Kingdom. I haven’t watched it yet. Not because I’m not interested – I am. I just like having it there, waiting for me. Knowing I can enjoy it whenever I want. It’s something I occasionally do with cupcakes. I sit and look at them. I enjoy having them there. It’s almost better than actually eating them.

Anderson is a polarizing figure for a lot of people. Even I, from my perch of adoring fandom, am able to see he’s not perfect. The sentimentality of The Life Aquatic felt forced. Darjeeling Limited was unnecessarily misogynistic. But most of the time, he strikes the right cord, and makes me believe that life is meant to be full of sepia tones and musical vignettes and narration by Alec Baldwin.

This adoration of Wes Anderson has colored my life for the last decade. The Royal Tenenbaums was the first movie Rand and I watched together in a theater. He gave me the DVD as a gift when I graduated from college. References to that movie worked their way into my wedding vows (no, I’m not kidding. Then again, at some point I was merely rambling, so lots of things worked their way into my wedding vows. Whole Foods. Brownies. Truck drivers. Indiana Jones. Those of you who were there know. Those of you who weren’t can imagine). In fact, when Rand first grew a beard, years ago, it was anticipation of a Halloween costume never realized: Steve Zissou.

The beard stuck. And every October since, I thought that maybe, maybe, I would finally make that costume. My husband would finally dress up as Zissou, and I would dress up as Margot Tenenbaum, and we’d walk side-by-side on a chilly, sepia-toned fall evening. And Peter Sarstedt would play. And some disembodied narrator would tell me it was time to kiss him.

Sometime in September, when most reasonable souls are not thinking about Halloween, I decided that this would be the year. I bought clothes from thrift stores, eBay, and Etsy. I purchased clothing dye and inadvertently turned my hands blue. I pricked my fingers at least a dozen times trying to sew trim on Rand’s costume.

I enlisted my mother’s help to tailor a dress, because my hips are not now nor will never be the size of Gwyneth Paltrow’s. (Mom did this without comment about my vast posterior, and for that, I am thankful.)

In the end, I was left with two handmade (but no less impressive for it, say I) costumes, and a slight problem. We would be in Barcelona and London in the weeks that preceded Halloween, arriving in New York on the morning of the 30th. So I mailed them to NYC ahead of us, and on Halloween morning, they were waiting.

This was the result of my labors: 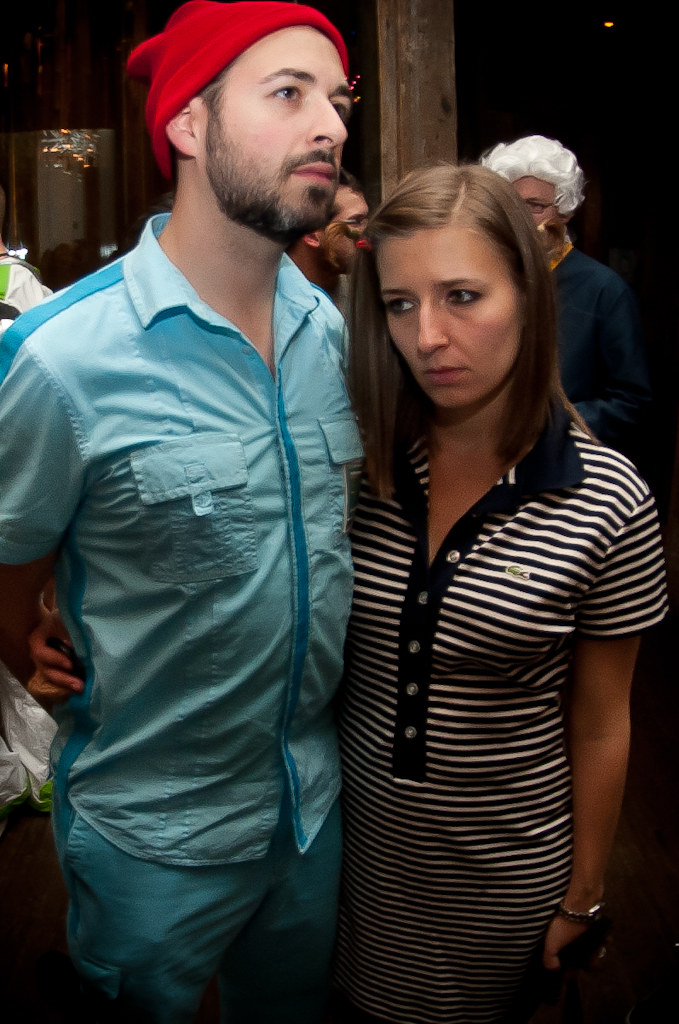 Since I am not tall, not svelte, nor blonde, I figured the only way I could really be Margot was to act like her. Aided by severe jetlag, I spent most of the night looking bored, shrugging, and being completely indifferent to my surroundings.

Some people got it. Like my dear friend Monique here, whose eyes really are that glacial blue-grey. 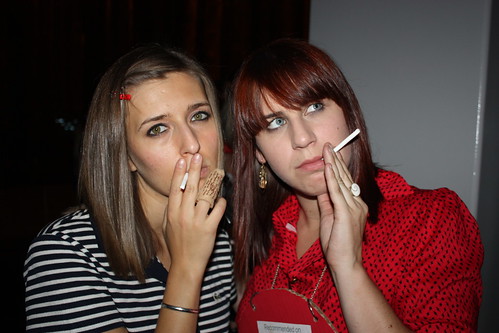 Those that knew me laughed, because reserved and quiet and miserable is not my natural state. 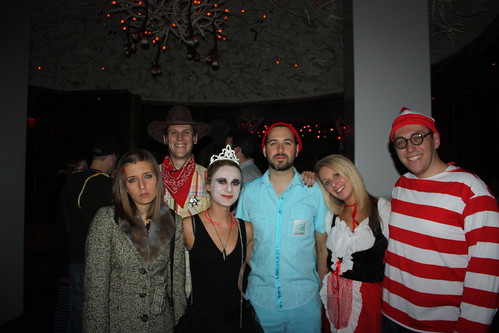 Others were concerned. One colleague of my husband’s asked me repeatedly what was wrong, and gave me a comforting hug in an attempt to cheer me up (I broke character long enough to tell him I was fine. And to hug him back.)

I resisted the urge to smile. Even when I caught Gilligan and the Skipper making out. 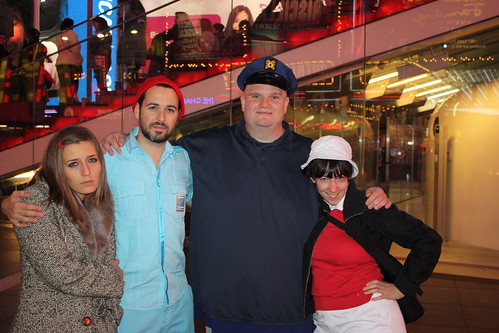 Or when we bumped into Burt and Dolly. 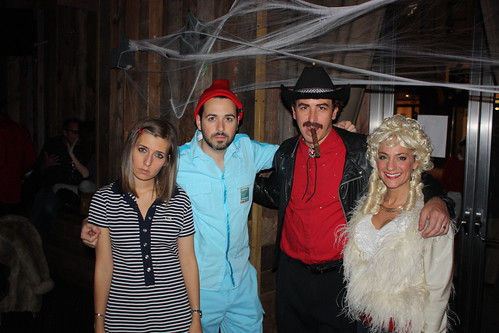 Though to be fair, it was actually more that we bumped into Turd Ferguson and Dolly.

All through the night I didn’t smile. Until I couldn’t really hold it back any longer. 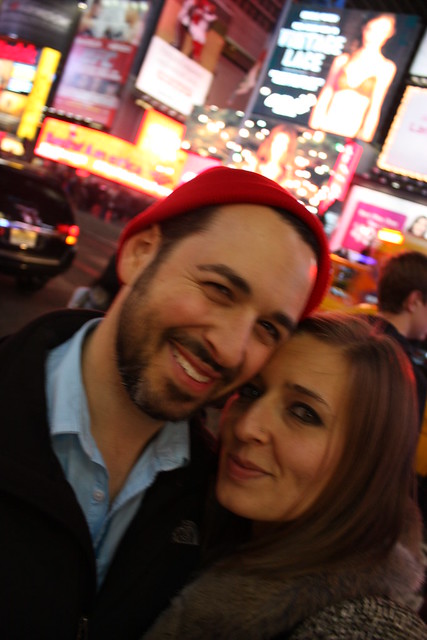 I don’t believe I can be blamed for the dissolution of my resolve. It’s all his fault. It always is. 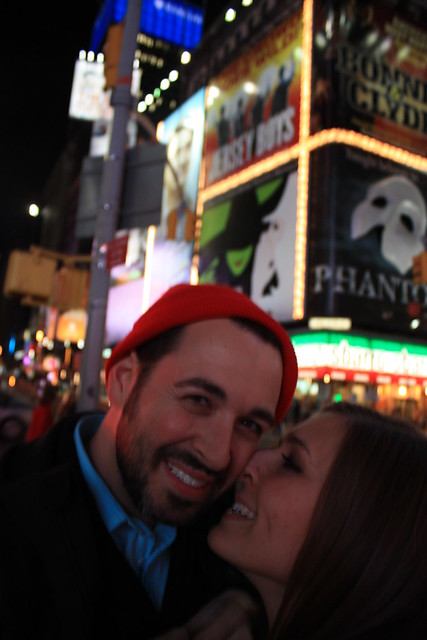 And so I smiled, and was reminded that I don’t live in a Wes Anderson film. My world is not sepia-toned. It has no narration other than the blog posts I’m constantly writing and rewriting in my head. And I’d make a terrible Margot. 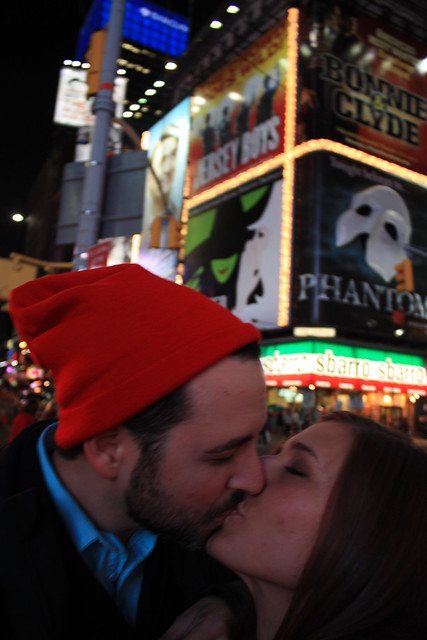 But every now and then, music plays, and my life becomes the stuff of movies.

P.S. – A special thanks to David of Zwickerhill Photography, who took the first photo of Rand and me that you see on this post. He’s a genuinely talented and sweet guy, and if you’re in the northeast and need a photographer, I would recommend him.

P.P.S. – All cigarettes featured in this post are of the candy variety.