Hotel Balmes, where we stayed for a few days during our trip to Barcelona last fall, stands out in my memory not for its convenient location nor its seemingly bored-to-tears staff. No. The perfectly-adequate-but-still-lacking-jamon-serrano breakfast does not really jump out at me, either, and our view (of an air duct) leaves no distinct mark on my memory.

What separates Hotel Balmes from so many others that I’ve stayed in is this: it is far and away the smallest double-occupancy hotel room I’ve seen, ever. Of course, “double-occupancy” might just be a silly phrase that we’re supposed to ignore – like “serving size” on a bag of potato chips. In the same bizarre parallel universe where folks only eat 7 Ruffles, two people can fit into a single room at the Hotel Balmes (the two must be related). But in this world, they cannot.

“Um, so … are you aware of that mole on your lower back? I saw it when you were accidentally spooning my husband, and it seems like you should get it checked out.”

“Huh? Oh, yeah. Wife told me the same thing. So … what have you been up to? Besides not working out?”

See? Awkward. But the hotel Balmes was on a different level. We literally had no place to put our suitcases, open or closed, and at one point I took my laptop into the bathroom and worked in there, because there was no other place for me to go (Relax. The seat was down. No blog posts appearing on this site have been written while on the loo … yet.)  But the most amazing thing about the hotel was this: I could, while lying on the bed, touch my toes to one wall and nearly reach the opposite wall with my fingers. 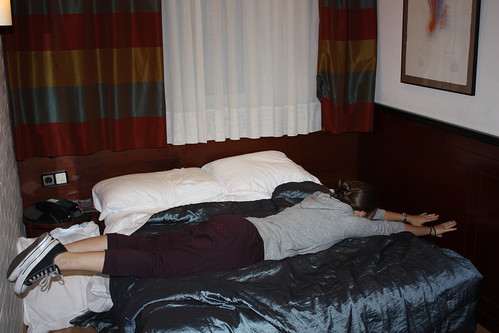 This is how I spent my vacation.

Here’s a slightly wider shot of the room and an even-wider shot of my butt (for those of you wondering, yes, yes I am wearing those pants): 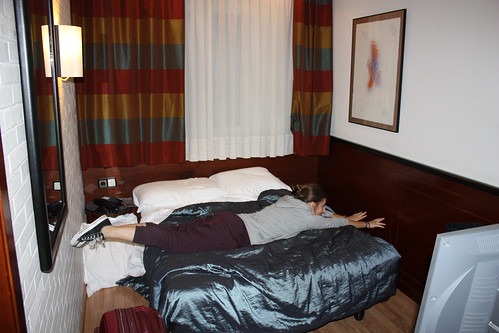 While the husband and I get along famously during most of our waking hours, the limited square footage offered to us by the Hotel Balmes kindled some latent homicidal tendencies within me. These were mostly forgotten when Rand reached for his toothbrush and we ended up in a passionate embrace. We weren’t even feeling amorous. There was simply no other place to go.

The Hotel Balmes isn’t a bad place, really. If you stayed there by yourself, you’d probably be just fine. But I’d suggest leaving the room before housekeeping arrives. Otherwise, you might end up making babies when really all you wanted was your bed made.