In my family, I have six male cousins, all of whom are older than me. Add to the mix my big brother, and I was left the sole girl amongst 7 boys. 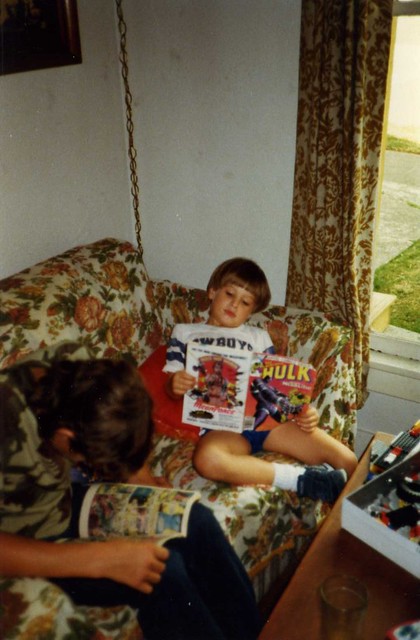 They read comics and played Atari, and sometimes I got to watch.

The result? I was a told a bunch of things that weren’t even close to being true, and I believed the lot of them, on account of the legitimacy that comes with age:

Me: When you were a kid in Italy, did you have a TV?

Cousin: No. We just stared at a square on the wall.

Brother: Stay away from earwigs.

Brother: Because they will crawl in your ear and lay eggs in your brain.

Me: What was that sound?

And so on. Fear not – I got my revenge. I gave most of them chicken pox, peed in every pool they ever swam in, and now that my cousins have children of their own, I can do the next generation what they did to me. Someone hand me a baby lion, because the CIRCLE OF LIFE IS HAPPENING RIGHT HERE.

Of course, the teasing was not without consequence. In addition to not sleeping through the night until I was 18 or so (Damn those ghosts), I now find every word that my cousins and brother utter to be highly specious, at best.

It’s why, when I was visiting one of my cousins for the holidays, and he told me that there were burrowing owls roaming around on his son’s soccer field, I politely explained that I didn’t believe him.

“Bullshit.” (Okay, fine. Not that politely.)

And so we followed him around on a balmy winter night in Southern Florida, looking for imaginary owls. I kept waiting for my cousin to prompt me and Rand to start digging in the dirt, knowing that when we were up to our elbows in moist, Floridian soil, he’d erupt into giggles and scream, “What are you doing? There aren’t any burrowing owls in Florida.” 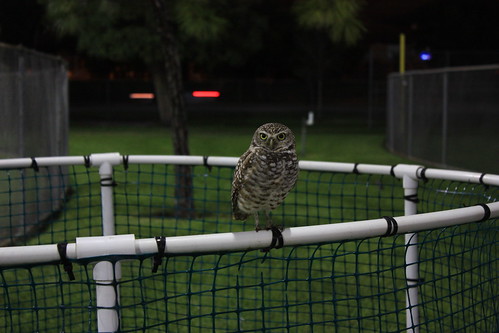 The burrows are fenced off so the kids playing soccer don't step on them. 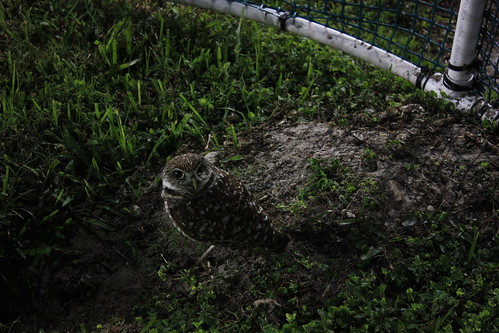 I'm pretty sure this little guy was thoroughly annoyed with me. It's hard to tell, since owls always look pissed off.

“No way,” I said, staring in disbelief at the small, yellow-eyed bird near our feet. “You were serious. There actually are burrow owls.”

“Of course,” my cousin replied.

And without missing a beat, he added, “Why didn’t you believe me?”