On a flight back from New Jersey last week, I found an old boarding pass that I’d been using as a bookmark. It was, incidentally, for the same route I was currently on – Newark to Seattle. I needed something to write on, and I didn’t want the bother of opening up my laptop. Looking at the boarding pass, I’d apparently done the same thing before: I’d written the beginning of a blog post on it, then promptly forgotten it. I don’t remember what I had intended the post to be about – it never got published, never got beyond the few words I had scribbled down. 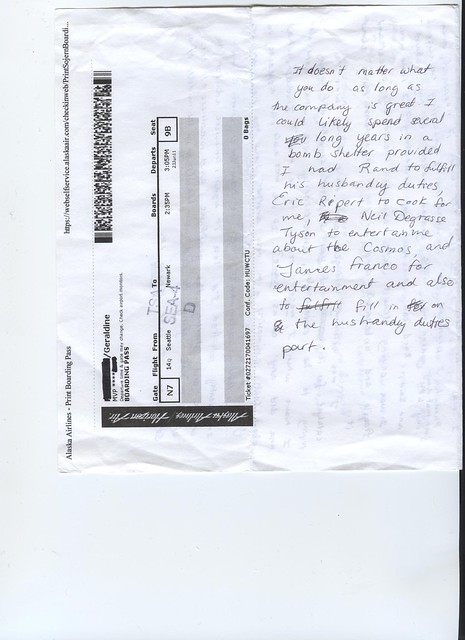 I don't know why I bothered to block out my last name or mileage number. You guys know everything about me, anyway.

For those of you who can’t read my messy handwriting, it reads:

It doesn’t matter what you do, as long as the company is great. I could likely spend several long years in a bomb shelter provided I had Rand to perform his husbandly duties, Eric Ripert to cook for me, Neil deGrasse Tyson to entertain me about the Cosmos, and James Franco for entertainment, and also to fill in on the husbandly duties part.

You know – just in case one of you ever sees me scribbling something down in an airport and wonders if it’s the next great American novel. Don’t worry – it’s not. It’s just me fantasizing about French food, astronomy, and heartthrob stoners. Oh, and my husband.