In my younger years (of which I have increasingly more and more … TIME, SERIOUSLY, CUT IT OUT) I often dreamed of spending New Year’s Eve in Times Square. I’d be huddled alongside the masses, and it would be cold and clear and wonderful. The ball would drop, the crowd would cheer, and I’d have someone to kiss.

But as the years passed, and I actually spent some time in Manhattan, I realized that my dream New Year’s Eve, much like my girlhood vow to marry Charlie Sheen*, could not stand the test of time.

This year, we found ourselves in Jersey at the end of December, and we were contemplating going into the city for a few days. We had different agendas: some of us wanted to shop (okay, fine. It was me), some of us wanted to eat cupcakes (also me), but we all agreed on one point – we had to get out of the city by New Year’s Eve. Because it was going to be a madhouse.

And boy, were we right. 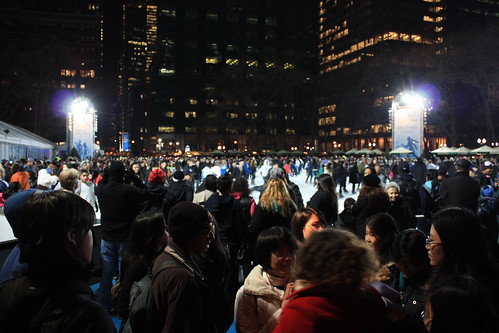 We could barely walk through Bryant Park. There were people everywhere.

The city was packed. Uptown, downtown, side streets, alleys. Every lobby of every hotel was mobbed, ever restaurant crowded, every show sold-out.

Before we left town on the night of the 30th, I glanced at some fliers our hotel was distributing, with tips about the festivities for New Years’ Eve. Apparently the NYPD was setting up “holding pens” in Times Square for those who wanted to participate in the festivities. They recommended you arrive before 4pm, pile into the pens, and … wait for midnight. Supposedly folks were there starting at dawn.

“Gah,” I told Rand. “That sounds so boring. And I hate port-o-potties.”

At which point my husband politely informed me that there were no port-o-potties. The people waiting in the pens would have to stay there for at least 8 hours, with no access to bathrooms.

And that was when I learned something alarming and somewhat unbelievable. Apparently a lot of the Times Square revelers that you see on television? They are wearing adult diapers. VOLUNTARILY.

Let’s recap: a group of young people with  (presumably) perfectly functioning bladders were standing out in the cold wearing adult-sized diapers, all so they could watch Cee Lo Green butcher a John Lennon song, along with thousands of like-minded idiots. I fear for the future, as should you.

We, instead, stayed in Jersey. We made dinner, drank some wine, had access to a bathroom whenever we needed it, and went to bed at a reasonable hour.

No, we weren’t in Times Square. We weren’t even in New York. And it wasn’t particularly cold or clear. But the ball dropped, and at midnight, I had someone to kiss. And if I squinted, he almost looked like Charlie Sheen of years ago – before all that winning nonsense ruined his face. 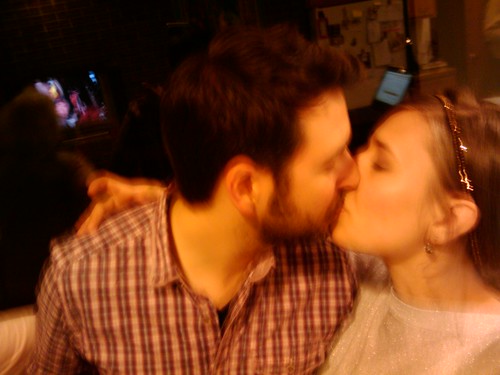 Plus, I wasn’t wearing a diaper, so there’s that.
–

*I was eight. Don’t judge. It’s not like you made great decisions when you were eight, either.