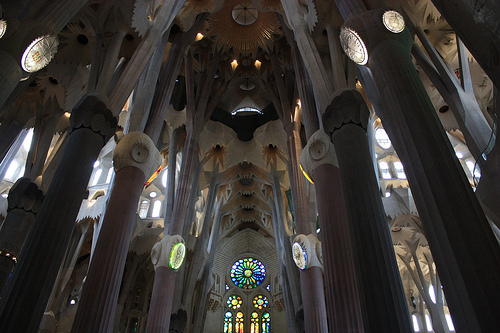 Folks, I have some sad news. This will be my third and final post about Gaudi’s architectural feats in Barcelona. (In case you missed it, here’s Part One on La Pedrera and Part Two on Casa Batllo.)

I know, I know. You’re devastated, aren’t you? I can tell by the way you’re joyfully skipping around the room, screaming, “THANK GOD IT’S OVER!” (Yes, through the magic of the internet I can see you, and no, I do not appreciate your candor.)

Okay, fine. Perhaps the last three days of architecture-centric posts haven’t been the most interesting, but I promise, today will be. Because today I’m going to tell you about the Sagrada Familia: the enormous church at the heart of Barcelona that is Gaudi’s opus.

And, truly, if you think that three days of me writing about architecture have dragged on, then you need to consider how long it’s taking to build the Sagrada Familia.

That’s right – how long it’s taking. Because this, Gaudi’s greatest achievement, is not yet finished. Construction began in 1883. By the time Gaudi died in 1926, it had been forty years, and there was no end in sight.

Nor was there any predicted completion date. Not even when I first visited the Sagrada Familia back in 1997. I saw the building, but only from the outside (I was staying with a host family, and we walked by a lot of Gaudi’s works, but we didn’t go into any of them. It was heart-breaking). I comforted myself with the idea that one day I’d return to Spain, and I’d visit the Sagrada Familia, and see the inside of the building. By then, I reasoned, it would be completed.

I was half right, of course. I saw the inside of the church, and it was glorious. But it’s not finished.  The earliest predicted completion date is sometime around 2026 – the 100th anniversary of Gaudi’s death. 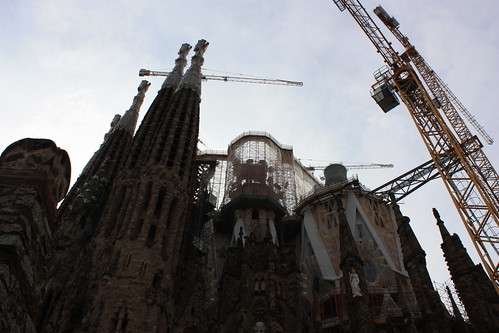 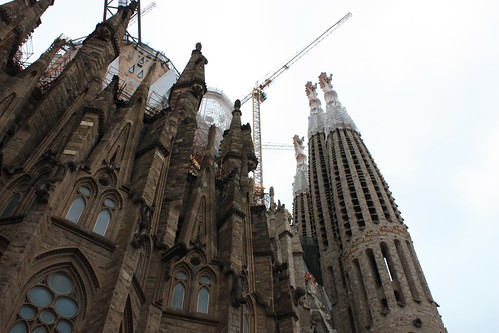 But hey, good art is worth waiting for, right? At least, that was what we told ourselves on our most recent trip. Because not only has the Sagrada Familia taken forever to complete, it can take forever to get inside. The line is staggering. It winds all the way around the block, takes several corners, and doubles back again. We spent ten minutes walking just to reach the end of it.

Fortunately, it went rather quickly for us as we found creative ways of passing the time. 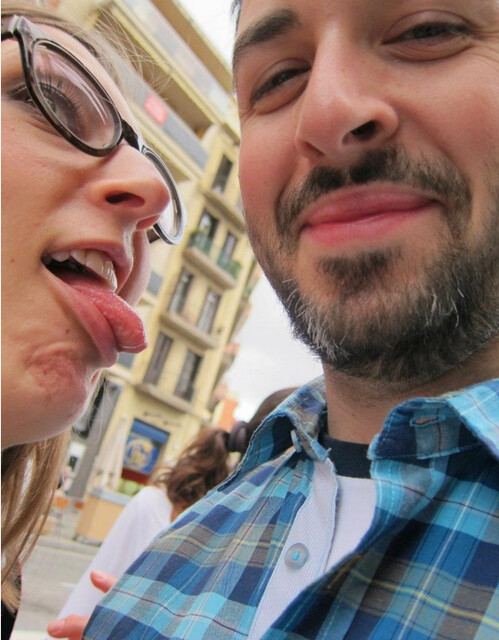 Joanna made the mistake of asking me to hold her camera. Silly girl.

Finally, we reached the Passion Facade. Though this was the first part of the cathedral we saw, Gaudi did not want it built first (indeed, it wasn’t completed until the 1980s) because he felt the design would scare off visitors. Stark and skeletal, it represents the crucifixion of Jesus and man’s many sins. 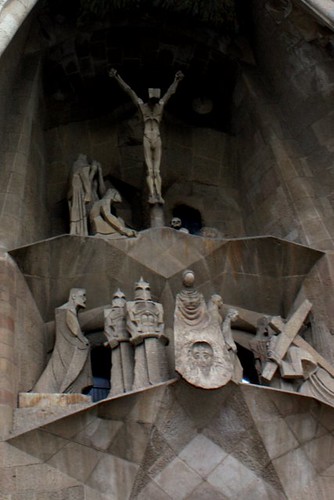 Indeed, it is not cheerful

And lest you forget that, you are reminded on the front door. 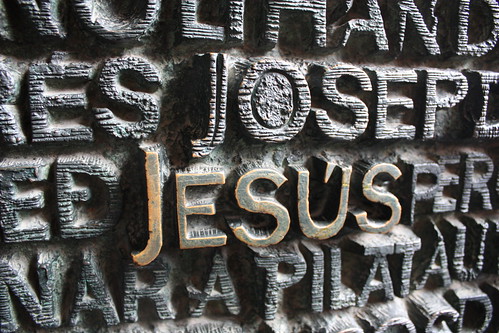 Finally inside, we found the cathedral was … well … it was purely Gaudi. 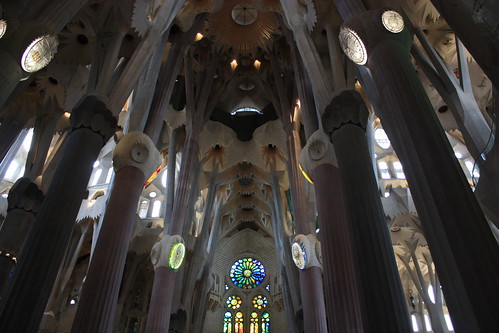 I know I’ve mentioned this before when it comes to Gaudi, but I think it bears repeating: this man was centuries ahead of his time. This is not what buildings looked like a hundred years ago. It’s not even what buildings look like today. 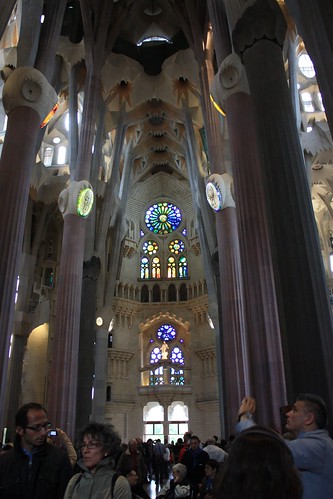 Everyone in the cathedral was craning their necks skyward. It’s not without justification: the ceilings and the stained glass windows are mesmerizing. 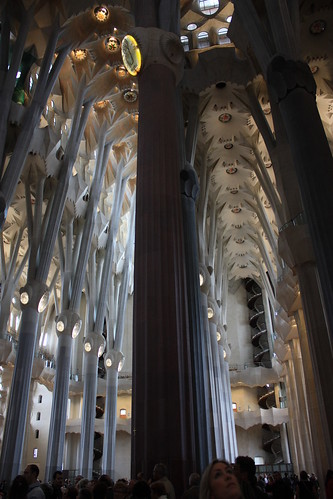 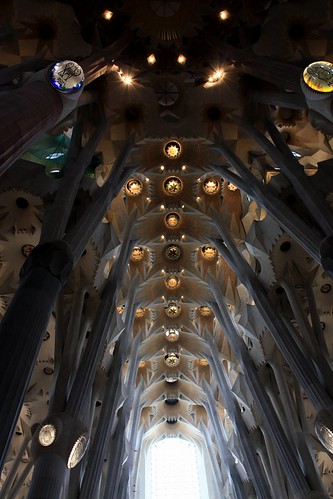 Part of the goal of the Sagrada Familia was for Gaudi to fix all the errors and mistakes he’d made in his previous works. And really, it’s hard to find fault with his not-yet-final product. 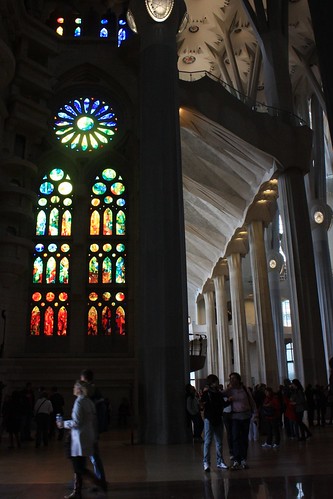 I could go on and on, but once again, the look on Rand’s face says it all. 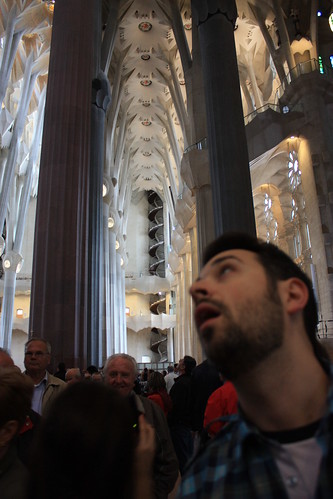 Still slack-jawed, we headed outside to see the Navity Facade before we left. This was the first facade that was completed, and it was done so during Gaudi’s lifetime. It’s much more uplifting than the Passion Facade we encountered on the way in.

There are Joseph and Mary, and the Baby Jesus. 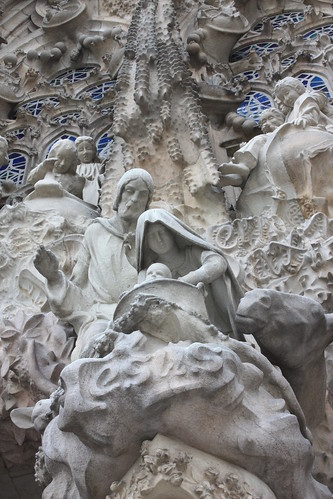 To one side are the three wise men. 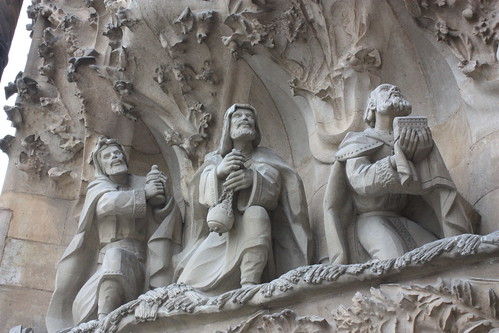 On the other are the shepherds. 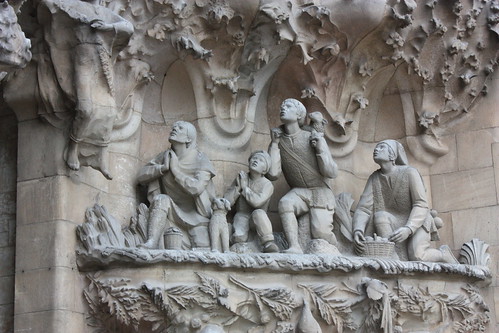 The scene is surprising lighthearted (especially for a Catholic church) and I found it ended our tour on a jubilant note.

At the base of the columns that line the doorway of the facade are a sea turtle and tortoise (representing sea and land, respectively). They are symbolic of things that are eternal and unchanging. In contrast to them, higher up on the facade, are two chameleons (symbolizing change). 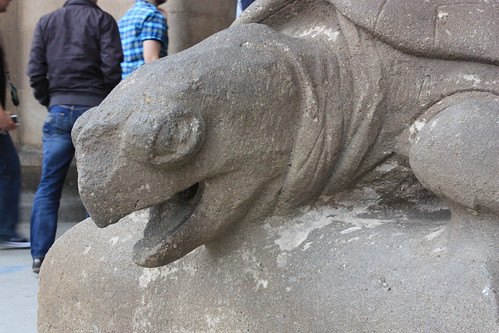 It’s not surprise that Gaudi thought so much about time and change. His intention was not to have the Sagrada Familia finished during his life. He left only rough sketches for certain parts of it: his intent was to have other artists of the time finish the building in their own styles. It wouldn’t be the work of one man or one artist. It would be the work of many generations of them.

He knew that in order to create something as grand as he had envisioned, you need a little bit of time.

The Essentials on the Sagrada Familia: