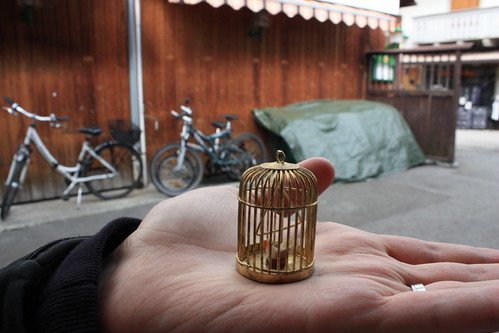 I’m not big on souvenirs. At least, not in the traditional sense. Rand and I are on the road a lot, and if I purchased every delightfully tasteless memento I encountered, we’d long ago have been buried under a pile of snowglobes, novelty beer bottle openers, and tiny resin sculptures of bears in swimming trunks. Which, for the record, doesn’t sound that bad. “Crushed by tchotchkes” is up there with “asphyxiation by cake” and “cuddled to death by kittens” on my list of preferred ways to die.

Don’t think that we’re models of self-restraint, because frankly, we have very little (lest you think I am lying, hear this: I just devoured a slice of coconut cake the size of my head and I wish I had more). Rand hates accumulating stuff, and my pragmatism outweighs any sentimentality I might otherwise have: “If I buy this, I will eventually have to dust it,” is how I usually talk myself out of purchases while on the road.

That’s not to say that I don’t bring things back from my travels. I often do. But I’m not sure if they quite qualify as souvenirs. They aren’t stamped with the name of the city, nor are they in the shape of a particular state, and they don’t often feature illustrations of local animals water-skiing. It’s not that I don’t love that sort of thing. It’s just that, well, you can find souvenirs like that everywhere.

So instead I find myself buying jewelry or clothes or some unusual little knick knack that I can’t bear to return home without.

These unsouvenirs aren’t exactly indicative of the geographic location I’m visiting. But they somehow remind me of my trip, of how I felt at that precise moment. Like when we found ourselves in Garmisch, a small village not far from where my father lives in Bavaria.

I’ve been to Garmisch plenty of times, and I’ve never purchased anything. I had no need for postcards, and the store selling giant beer steins had every name imaginable printed on them – Helga, Gunther, Rolf – but not Geraldine and certainly not Rand. And there was no way in hell I was buying a dirndl (I’ve made careless mistakes while shopping in Europe before. I’m not repeating the “harem pants incident” of Barcelona, 2011).

So instead we wandered aimlessly about the town, and down one forgotten alley, we came upon a rummage sale. 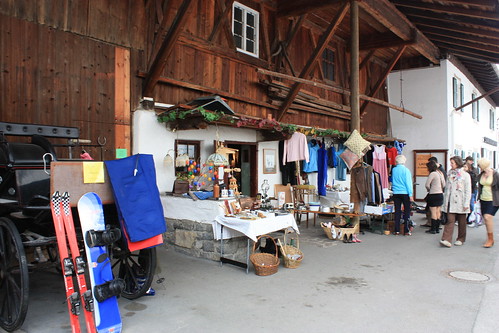 Those of you who follow my blog know that there are few things I love more than rummaging through other people’s unwanted things.

But this was more than that: this was rummaging through German people’s unwanted German things. Words cannot capture the sheer joy I felt at that moment. I did a happy dance. I clapped my hands together. I giggled maniacally. Rand attempted to calm me down, and I told him to leave me alone or I’d try speaking my version of pretend German to the locals.

He immediately retreated. My fake German consists of me screaming “THANK YOU THURSDAY POTATO SALAD” while sounding as angry as possible. It is absolutely mortifying and wrong, wrong, wrong. Rand will do anything to avoid having to deal with it. Including going to rummage sales, which he positively hates. My father, who was with us, didn’t seem too keen on them, either. But they went, both of them, to humor me.

Inside a small, darkly lit room – was it someone’s storage room? a basement? I never did quite figure it out – were numerous tables of various sizes. And on those tables were all sorts of treasures: children’s picture books from decades past; lone earrings whose partners were long since lost; records albums with smiling men in lederhosen on the covers; tarnished silverware that didn’t quite match; a small plastic elephant that I strongly considered buying (to replace one I had given away); and, perched by a window, this little guy: 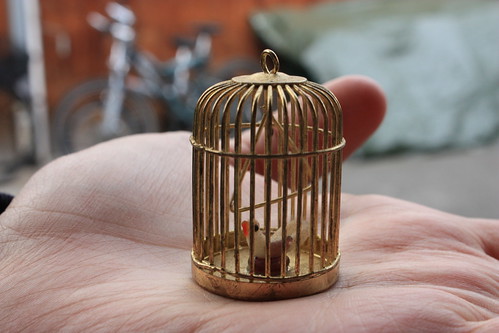 I gave it a good rinse when I got home, and found that the bottom twists off, releasing the bird from its cage.

A small glass bird, sitting inside a tiny bird cage. I asked my father if he could figure out the story behind it. He exchanged a few words with one of the women working the sale, who shrugged and explained to him that the woman who knew the history of the bird wasn’t there at the moment. The bird had a past, but I would never know it. It would never be able to tell me.

The woman held up her hand, all the fingers outstretched. 5 Euros.

“Want me to buy it for you?” Rand asked. I nodded. I was taking the mystery bird home with me.

“I might put it on a necklace,” I said to my father.

“Don’t be ridiculous,” he replied. And I couldn’t help but laugh.

My dad doesn’t sugarcoat his opinions. He thought the bird would be better on a shelf, and for now, that’s where it is: on a small shelf in my bedroom in Seattle. I might put it on a necklace, though, just to see him roll his eyes. That might be fun.

I don’t know the bird’s history. It’s lost to time now. But I know that I got it in Garmisch, with my father and my husband. I know that Rand wanted to pay for it and that my father insisted on doing so. And I know that it reminds me of both of them. That’s the story it has now, and for me, that’s enough. 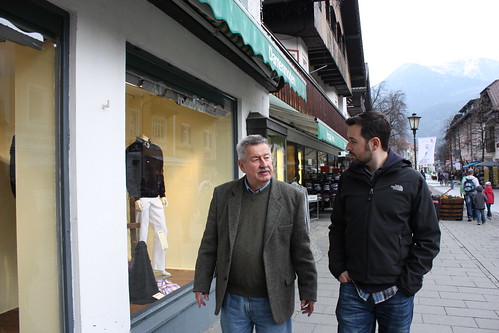