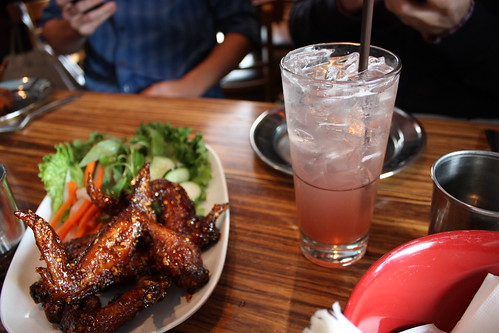 Pok Pok, for a lot of people in the northwest, is probably old news. When I first visited it a little over a year ago at the recommendation of my friend Jessica, it was still relatively obscure. The repetitive name did not hang on the lips of northwest foodies like a whisper to a lover, did not elicit knowing nods like it does now.

When I first went to Pok Pok, it was far less known.

In the year since, things changed. Owner Andy Ricker won the James Beard Best Chef Award – Northwest, and the restaurant became a sort of mantra for anyone seeking out good, legitimate Thai food on the chilly streets of the Rose City.

And so, on my last trip to Portland, when I finally took Rand there, and some friends of our who were in town from Philadelphia, it was not because I wanted to be cutting edge. It was no ostentatious display of my foodie knowledge.

No, it was simply because I wanted a good meal. And I knew at Pok Pok, I would get it. Of course, that didn’t mean that I wasn’t hailed as a genius by my out-of-town dining companions. Especially when I grabbed the menu and starting ordering like I was a regular.

We started with Ike’s Vietnamese fish sauce wings. I hadn’t had them before – since I’d dined alone at Pok Pok on my last visit, I couldn’t justify an entire appetizer and entree to myself. But I knew that Jessica had loved them, and she has yet to lead me astray. They are normally quite sweet (Jessica dubbed them candy wings) but we tempered their sugary coating by getting the spicier variant. Despite seared tongues, we could not stop eating them. 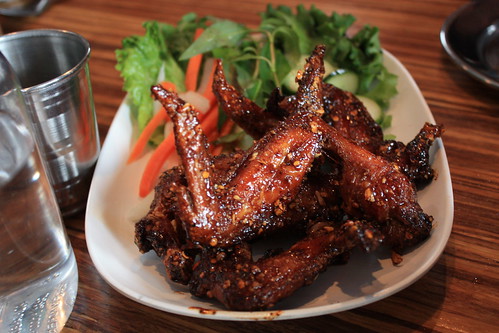 I told everyone to try a drinking vinegar as well. Yes, I said vinegar. That you drink. They’re popular throughout Asia, but when the name first hit my American ears, it sounded like nonsense. Until I tried one. They are almost like a fruit-flavored syrup – yes, there is tartness, and a bit of vinegar taste, but it isn’t off-putting. Mixed with club soda, it creates a surprisingly refreshing beverage that pairs well with the spice of many of Pok Pok’s dishes. 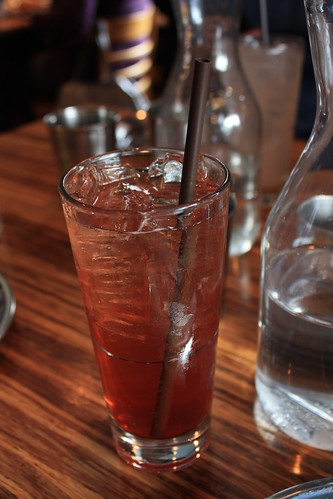 I think I got pomegranate. Or rhubarb. Whatever it was, it was delicious.

I ordered the Pok Pok Special: half a roasted game hen, a small green papaya salad (studded with peanuts and tomatoes, it was almost-excruciatingly spicy), sticky rice, and two dipping sauces. Yes, it was what I ordered last time I was at the restaurant. No, I do not have any regrets. 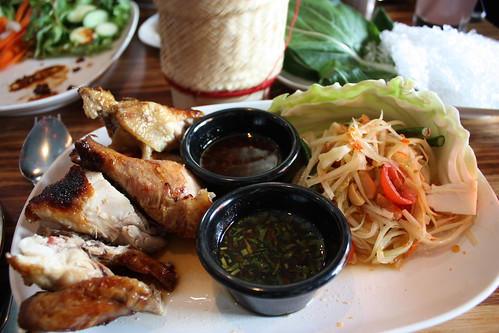 Rand ordered the boar collar – a dish so laden with chilies that it comes with its own side of iced greens so that you can periodically cool off your tongue between bites. 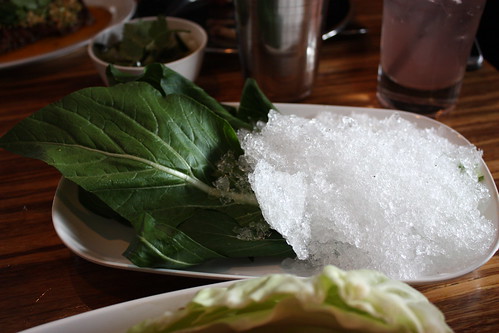 I dug in with my bare hands, which gave permission for everyone else to do the same.

“I love that you did that,” one of my lunch dates said. As though there was another way.

We finished our meal and walked out of the restaurant into the grey afternoon, fighting the drowsiness that accompanies a good midday meal. Our tongues still burning, our stomachs full, we needed only whisper the name Pok Pok when someone inquired as to the cause of epicureal afterglow.

Perhaps the restaurant is not the secret it once was. Perhaps my lunch dates were late to the game. But they weren’t complaining. And neither was I.