I know, because I spend most of my days wrestling with them, trying to manipulate them into what I want them to be, often to no avail. Have you ever tried chiseling someone’s likeness in a a hunk of jell-o? It’s something like that.

But I love them, and I can’t rightly abandon them, because my blog would be oh-so-boring without words. It would be nothing more than photos of cupcakes and me making out with my husband. (I realize it’s not much more than that now, but it has the potential to be more, thanks to words. Or so I tell myself.)

And so I struggle to understand them. I even went so far as to read Steven Pinker’s The Stuff of Thought. I mean, I read part of it – somewhere in the ballpark of 24 pages. Which doesn’t sound like a lot, but believe me, it is. That book is excruciating and fascinating. It likes watching a documentary on space while having someone scream into your ear and slap you repeatedly with a fish.

Yes, it’s interesting and all, but DEAR GOD make it stop.

In the two dozen odd pages that I managed to get through of Pinker’s treatise on language and how we learn it, he touches on the topic of how we, as a society, accept new words into our lexicon. Email caught on, as did gerrymander, but teledildonics didn’t (mankind’s loss, as I am sure you will agree).

As Pinker points out, we don’t even know what to call the first decade of the 2000s. (The naughties? No. No one called it that.)

One of the most salient points that comes from the whole thing is this: it’s really frigging hard to get people to universally accept new words. And yet, despite this, Cockney Rhyming Slang exists.

It makes no sense.

Are you familiar with Cockney Rhyming Slang? It’s crazy stuff. And I’m sad to admit that Wikipedia will probably do a far better job of explaining it than I will. But here’s my feeble attempt:

It originated sometime around the mid-1850s in London, and was designed so that folks could have discussions without those around them understanding what they were saying (for the record, I usually barely understand what’s going on around me, anyway, so it would be a totally redundant measure).

Here’s basically how it works:

I SWEAR I AM NOT MAKING THIS UP. This is actually how CRS evolved. And it changes and evolves to reflect current events. For example, to get into a “barney” means to get into trouble. Because “barney” actually refers to “Barney Rubble”, whose rhymes with trouble.

And yes, it still lives on today. Rand and I saw this on a menu at an Indian restaurant in London: 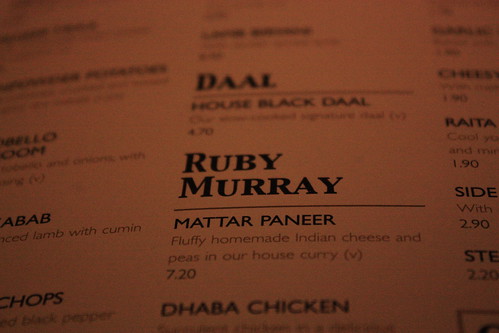 Can you guess what a “Ruby Murray” is? Sometimes it’s just called a “ruby” (it originates from the name of an Irish singer who was popular in the UK in the 1950s). To be fair, the description of the dish kind of gives it away. 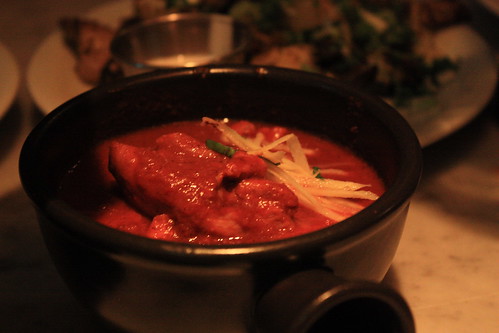 To me, it’s unfathomable. I can’t even get people to call me by my correct name (Jennifer, Gabrielle, Genevieve, and Gretchen have all be directed at me in the past by desperate coworkers and new acquaintances trying to get my attention). But here is a whole subset of the English language derived from totally non-intuitive origins that is so universally known in England that IT APPEARS ON MENUS TO SHEER BEFUDDLEMENT OF TOURISTS.

I know what you’re thinking, and I had the same realization: we NEED this in America. You’re with me, right? Here’s how we get it started. “Drinking straws” rhymes with “panties and a bra.” So we’ll just nix the bra part, and a straw is now panties.

So next time you order a drink, be sure to ask the bartender to put some panties in it. I see no downside to this.

Or maybe I’m going to get us all into a huge barney. But at least it won’t be boring.