I realize this post is going up a little late. Forgive me. Rand and I are in Vegas, and our hotel room has a magnifying mirror (you know my history with those) that has been very informative. Because of it, I learned that I not only had a unibrow, but also a teeny tiny mustache. You’d think this would be the sort of thing one would be aware of. Like, if someone asks you whether or not you have a mustache, you’d hope that you’d be able to answer correctly, right? BUT CLEARLY I COULD NOT. Because up until twenty minutes ago, I’d have said, “No, I am mustache-free” and that would have been an inadvertent but nevertheless DIRTY, DIRTY LIE.

Anywho, after some up-close-and-personal-time with the magnifying mirror I’m now pleased to say that I am (mostly) unibrow- and mustache-free. Yup. All those pesky and nearly invisible follicles have now been replaced with red, rash-like bumps. Clearly an improvement.

The point I’m trying to make (if indeed I am trying to make one … wait … am I? DAMN YOU, VEGAS. You have ruined my brain after a mere twelve hours) is that travel often makes us aware of how little we know: about ourselves, about other places, about everything, really.

And during our last trip to Bavaria, I realized how little I knew about the place my father calls home, and how little I could explain.

Like, why are there charms in the shape of pretzels? How does something like this even exist (and with the whopping price tag of 60 Euros, who buys it)? Are people wearing snack foods as jewelry now? Is that a thing? I’m not saying a have a problem with this (you all know what a snack food advocate I am). I JUST WISH I HAD BEEN TOLD ABOUT THIS: 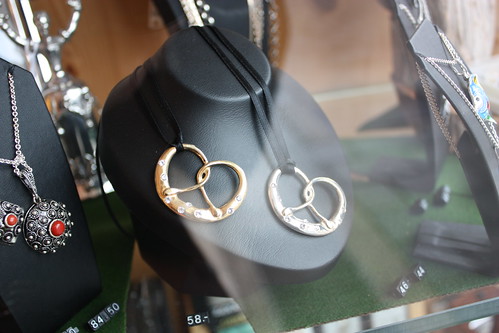 Actually, I learned about pretzels in Sunday school. A monk first made them from scraps of dough in the shape of arms in prayer. DELICIOUSNESS ENSUED.

And (to use a phrase of my father’s) what the hell is going on here? 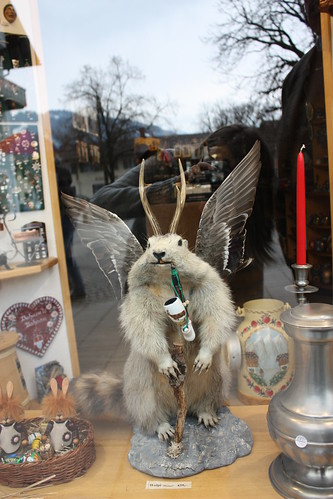 I mean, it’s part rabbit and it has wings and antlers and I think it’s smoking a pipe, right? I … I can’t actually articulate my confusion. I just start speaking in high-scoring Scrabble words: “ANTLERED … ENIGMATIC … TAXIDERMY.”

And just when my brain is about to break (as it often does when I play Scrabble, mostly because my brother seems to have learned all the 2 and 3 letter words in existence, THE JERK) I see something else that leaves me befuddled: 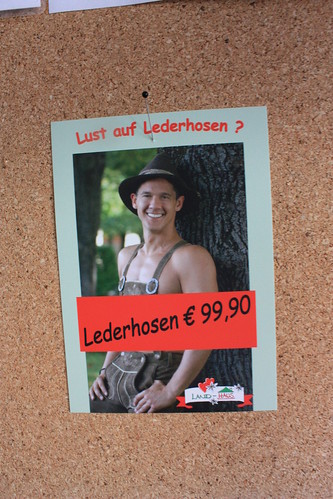 I think this is an ad for lederhosen. Or possibly an ad for a service that allows you to rent hairless young German men. In either case, IT IS PURE MAGIC.

And that’s the thing about travel: sometimes it raises questions that you can’t answer. And frankly, that’s good, because I swear that every time that happens, we build brain cells. Or at the very least, we have fun. The only reply we can give is “Well, I have no idea.” Or “If every place were the same, life would be boring.” Or “The world is a lot bigger than just my hometown.”

And all of those answers are just fine, says the mustached girl.