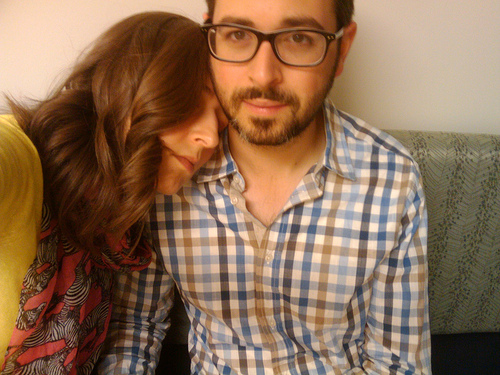 Posted in: Nothing to Do With Travel, Random Musings, WTF, WTF Wednesdays 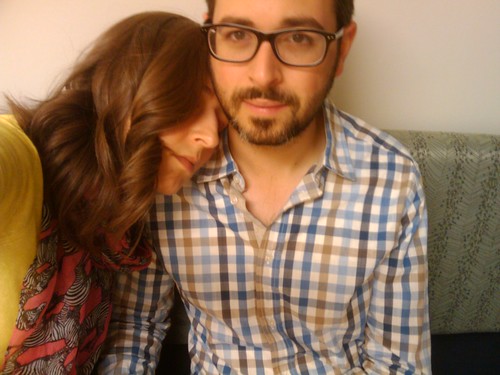 There are things that you can imagine yourself saying.

Things like, “Why thank you, yes, I will take a third helping of dessert.”

“We can hang out at our house, but you guys have to not touch the dust piles. I’ve been collecting them for three months, and there’s one specimen that I think is becoming sentient.”

And then there are things that you hope to one day say, like:

“I just invented a new kind of cheese which makes you skinnier.”

And then there’s shit that you never imagined saying, but somehow, you end up saying it. I’m guessing every single person who’s ever uttered, “I’m getting a divorce” or “I didn’t realize it was raccoon meat” has felt this way. The words leave your mouth, and they don’t sound real.

Lately, I’ve been saying a lot of things like that. Mainly, this:

I have a brain tumor.

The standard reaction to this revelation is something like this:

“What the fuck do you mean ‘you have a brain tumor’?”

Followed quickly by, “Wait, why Steve?”

As for the first question … yeah. I know. I don’t really get it, either. I’m hoping if I keep repeating it, it will make more sense. For what it’s worth, I didn’t really understand Inception, either.

See how well that works? It kind of rolls off the tongue, really. And considering how many big words we’ve had to deal with over the last couple of weeks, I’m inclined to stick to something short and sweet and monosyllabic (this must be how the Kardashians feel). 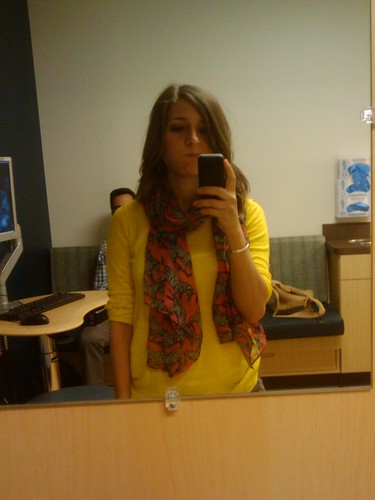 Besides, the technical name for Steve is a bunch of words I can barely pronounce. When we first learned of him, some overzealous radiologist thought he might be glioma, which is a word that you should not, under any circumstances, look up, because it is bound to lead to an absolutely miserable few days. Trust me on this. That weekend was punctuated with tears and sniffling and HOLY-SHIT-I-NEVER-WROTE-A-BOOK realizations.

Also, rather inexplicably, I cleaned out my closet that weekend, because I didn’t want people going through my stuff and thinking, “Dear god, when did she ever plan on wearing that?” Nothing like a little fear of brain cancer to convince you, once and for all, that you can’t pull off skinny jeans.

I concede that the closet purge might have been melodramatic. But the ingesting of half a dozen cupcakes in three days was completely justified, and I have no regrets. 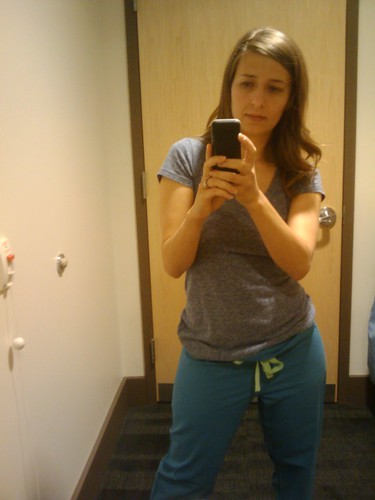 Fun fact: when you get an MRI, you can’t have any metal on you, so if you’re wearing jeans, they give you scrubs to put on. Or, as I call them, MEDICAL JAMMIES!

Discussions with doctors followed, and more tongue-twisty words were thrown out. The good news is that my neurosurgeons (yes, I have neurosurgeons now) are pretty darn confident that Steve is not a glioma, which means I can procrastinate on my novel a little more and continue wasting away long hours eating cookies while watching TV with my sweetie. Phew.

Instead, the doctors think Steve is a – wait for it – pilocytic astrocytoma (coincidentally, I’m pretty sure that’s also the name of an ancillary character from The Hunger Games). Weirdly, those are the type of tumors that most often appear in children and young adults, so it’s nice to know that some part of my body is still youthful. My boobs might be making a mad dash for my knees, but the inside of my brain thinks it’s 18.

Frankly, this diagnosis sounds pretty plausible to me, especially after looking at some of the symptoms associated with pilocytic astrocytoma (from my good old unreliable friend Wikipedia):

OMG. That sounds JUST LIKE ME. Except for the lack of appetite part. And my biggest visual complaint is people who wear Crocs out in public. But everything else? SPOT ON. There might as well be a photo of me on that Wikipedia page (actually, give me two seconds, and there will be).

Unfortunately, there’s no way to definitively figure out what Steve is without a biopsy – which wouldn’t be such a big deal except for the fact that Steve’s clinging to my hypothalamus like a bride-to-be clutching a Vera Wang gown at Filene’s basement.

So they’re going to drill a hole in my head, poke some tools through my non-dominant frontal lobe, and pull off a piece of Steve. Then they’re going to seal up my head with a titanium plate (sadly, adamantium is unavailable.) 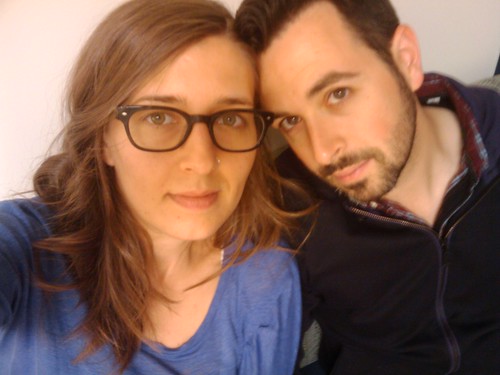 They might even manage to the do the surgery without cutting my hair (they’ll just part it), but the surgeon made no promises.

Regardless of the outcome – whether he’s cancer or not – they’ll likely never need to do more brain surgery.

And if it is cancer … well, we’ll burn that bridge when we come to it. Like I said, my tumor’s small (only 1 cm), and he hasn’t ventured into any other parts of my brain.

Still, we’ve been slightly on edge in my house about the whole brain tumor/brain surgery/brain cancer thing:

Me: What if they botch my surgery?

Rand: They aren’t going to botch your surgery.

Me: But what if they do. What if they accidentally hit the part of my brain that controls sarcasm. Or what if I wake up and I’m vapid?

Rand: You aren’t going to wake up vapid.

Me: BUT WHAT IF I DO? What if I suddenly decide that Katherine Heigl is the greatest comedic genius to have ever lived, and I spend all my waking hours watching her movies? What if I start a fansite dedicated exclusively to her work?

Rand: Okay, that would actually be kind of amazing. I sort of want to see that happen.

We’ve actually started taking turns freaking out. I mostly freak out about the surgery. Rand freaks out about the possibility of cancer:

Me: Stop it. You’re giving me that look.

Me: That oh-my-god-what-if-it’s-brain-cancer look. It’s sort of sad and weirdly probing. It’s the look that everyone’s been giving me lately.

Me: Yes you are. It’s like you’re trying to memorize my face. And then your chin starts getting all quivery. JUST LIKE IT IS NOW.

Me: It’s not brain cancer. I’m not awesome enough to be diagnosed with something that dramatic.

Rand: That’s the problem. You are precisely that awesome.

Me: Awww. That’s sweet. I’d totally make out with you if you’d stop giving me that look.

There’s also a series of complications that could result from disturbing my hypothalamus (whom I’ve named Cerise. Obviously). She might not take kindly to Steve being evicted. I imagine the two of them are in this weird dysfunctional relationship, and Cerise really doesn’t want Steve to leave, but he’s bad for her, and she doesn’t see it and … 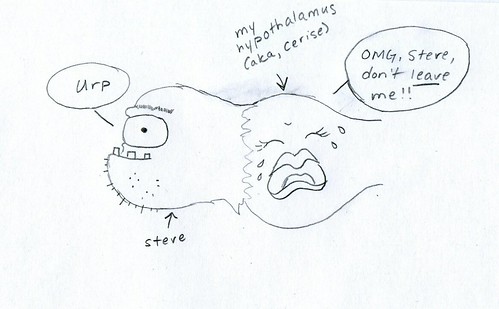 “It’s amazing that this is how you spend your time.” – Rand

What? Doesn’t everyone imagine soap-operatic vignettes about their brain tumors? It can’t be just me, folks.

Anyway, poking around near my hypothalamus might make me really tired. Or really hormonal. Or I might gain a ton of weight. So not all that different from the status quo, really.

My operation is first thing tomorrow morning, Seattle-time. It will take a couple of hours, and if all goes well, I should be awake by early tomorrow afternoon, just in time for Ellen.

I suspect Rand will likely be tweeting about it, if you want to know what’s going on. I won’t be online for a few days – though I already have a few posts pre-scheduled to go up later this week. And I’ll likely be taking a few days off next week, though I’m not really sure. It’ll depend.

I realize that this sounds like a really big deal, but it’s surprisingly common and par-for-the-course. My surgeon does 300 of these procedures a year. Plus, it’s likely benign. And even in a worse-case scenario, things are looking really good. I have a friend who’s had actual brain cancer TWICE, and he’s doing awesomely (I’m staring at his wedding photo right now, actually.)

And sweet heavenly father, let’s get some perspective: children get pilocytic astrocytomas all the time. LITTLE KIDS GET THIS. I have the pleasure of dealing with this as an adult, which is far easier.

But since I’ve been cleaning house in every other aspect of my life, there are a couple of things I would like to note before I go get my skull drilled, just for piece of mind (heh).

To all my readers: Thanks for visiting my blog. Having this silly little site makes it shockingly easy to deal with the unexpected things life sends.

To Rand: Stop giving me that look. YES YOU ARE GIVING ME THAT LOOK. Everything will be fine. (Also, between you, me, and the internet? I love you more than the waking world).

To everybody else: Damn it, I love you guys, too. Please stop sending me cupcakes. I like them, but this is getting ridiculous. Also, thank you for your calls and emails and texts and tweets.

To every hater that ever wished me cancer, death, or other unpleasantries: Game on, bitches.

P.S. – Everyone has been curious as to why I got an MRI in the first place. Basically, I was having miserable headaches that were preventing me from getting work done. And they were near-daily in frequency.

I know what some of you are thinking: you probably get headaches often, and you’re now wondering if you have a brain tumor.

I won’t lie: you probably do. OMG YOU PROBABLY HAVE A HUGE BRAIN TUMOR AND IT’S GROWING INSIDE YOUR HEAD!!!!! AUGGGGHHHHH!!!!

Hee. No, I kid. I kid. That’s highly unlikely (the docs said my headaches and tumor might be unrelated, actually). But man, you should have seen your face. Hilarious.