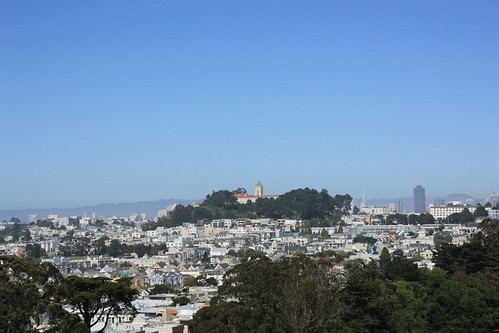 For once, they don’t charge you for the view.

–
I’m a bargain-hunter. I’d like to think of this as one of my better qualities, instead of, as my husband puts it, “an acute kind of madness.” And granted, sometimes I do strange things to avoid spending money. Not unethical things, mind you. I’ve never shoplifted or stolen anything (okay, FINE, there was that one time), but I will go to ridiculous lengths to save a buck.

For example, for many years, I would buy this fruit salad from the grocery store that had melon chunks in it. There were other variations with berries, but I always went for the one with huge portions of melon. One day Rand told me that he didn’t really like the melon-chunked fruit salad.

“Wait, you don’t like it, either? Then why do you keep buying it?”

Yeah. I’m well aware of the fact that if I didn’t buy the fruit salad in the first place, I’d have saved more money overall. But the point was to have fruit salad and save money, too. Even if I didn’t like the damn fruit salad.

This sort of rationale leads to all sorts of problems when we travel. I will go to museums that I don’t really want to see, just because they are free. Or I’ll intentionally get off at the wrong bus stop because the Ride Free Zone is about to end, and I don’t want to pay the increased fare.

I am a gal who finds getting lost preferable to spending $2.25. Obviously, my judgement isn’t great. But believe me when I tell you that this next tip is a good one. And it makes the bargain hunter that I am at heart glow with pride.

If you visit San Francisco (which is already a pretty darn expensive city on its own), and you manage to get down to Golden Gate Park, I suggest you visit the DeYoung Museum.

The museum itself is fairly nice, and general admission is only $10, which is far better than a lot of museums in major U.S. cities. But what really won me over was the Hamon Observation Tower, which is accessible from inside the DeYoung. You don’t need a museum ticket to visit the tower. It’s free.

And don’t worry – this isn’t some melon-chunked fruit salad. This is actually something you’d want to see. From the top of the tower, you can enjoy some amazing views of the city. 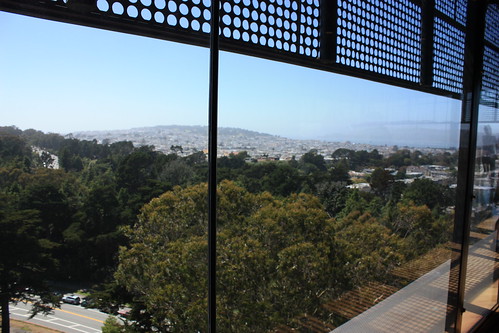 Okay, fine. That’s a photo of mostly trees, which probably isn’t very convincing. But wait – it gets better. 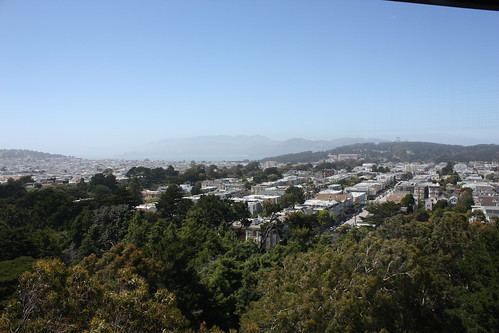 Waaaaay in the distance, on the right, you can even see the top of the pillars of the Golden Gate Bridge.

You can get a great lay of the land from up there – and get a view of the grass-covered top of the California Academy of Sciences, which is just across the street. 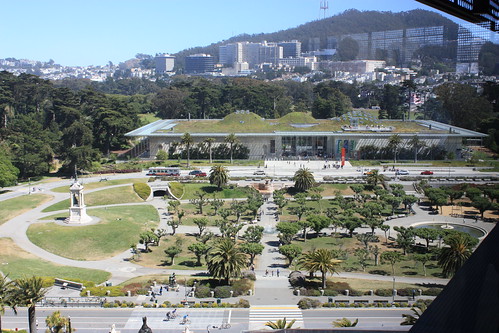 There are 360 degree views, even though some of them are, as I noted, simply of trees. 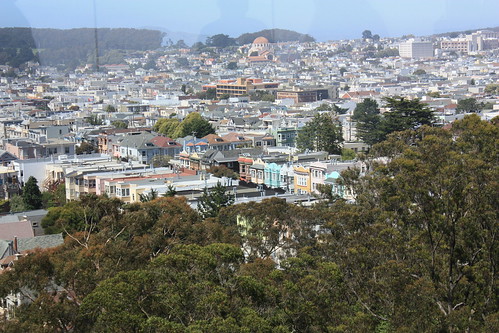 And maybe a few houses, too.

Still, it’s pretty fantastic. There are even little benches to sit on. It’s the sort of thing that could bring even a huge bargain-hunter and her financially-reckless husband together in happiness. 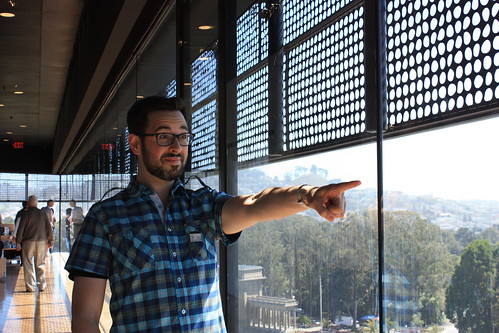 And did I mention it’s free? It totally is.