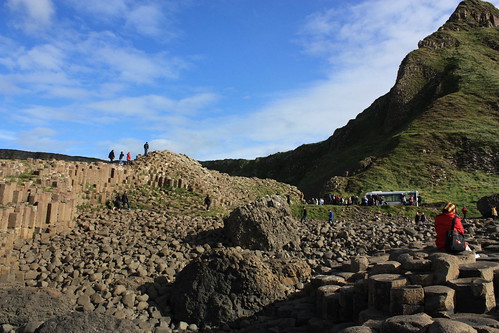 Fortunately, even non-giants are allowed to explore the area.

While we were in Northern Ireland, I decided that we needed to visit the Giant’s Causeway despite not really knowing what it was. When Rand asked, I replied with the rather vague and not-entirely accurate, “It’s a big rocky thingy. Um … with giants.”

My explanation, he pointed out, was in no way helpful. Fortunately, upon stopping by the newly-built visitor’s center, we came back with a slightly clearer picture. 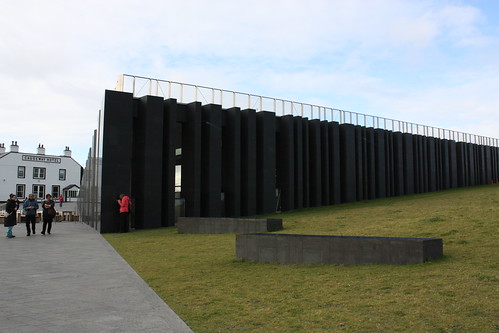 From this angle it looks a wee bit like a bomb shelter, but it’s really quite nice inside.

The Giant’s Causeway is the result of ancient volcanic activity. About 50 to 60 million years ago, a volcanic eruption caused molten basalt (which is regular salt, I guess, but, you know … has a “ba” in front of it) to seep through chalk beds, creating a wide, flat surface which then cooled rapidly. This caused the basalt to contract and form tall hexagonal columns. 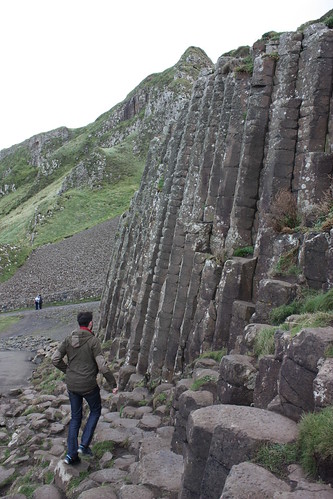 The cooling caused further striations, so that the columns look like they are composed of many small “biscuits” (I didn’t come up with that. Apparently other people see cookies everywhere, too). The biscuits have convex tops and concave bottoms, so they fit together neatly, like a very elaborate game of Jenga. 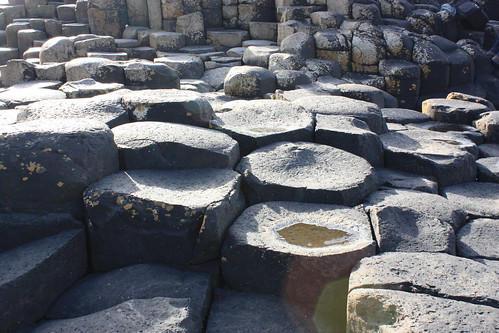 Some of the basalt “biscuits”. Water pools in the concave impressions. 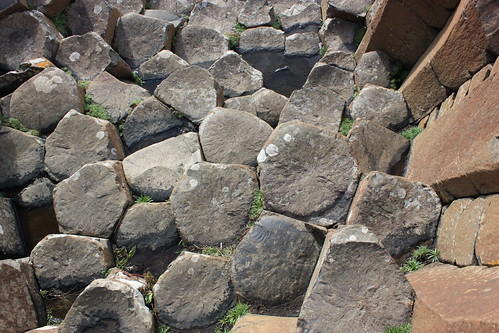 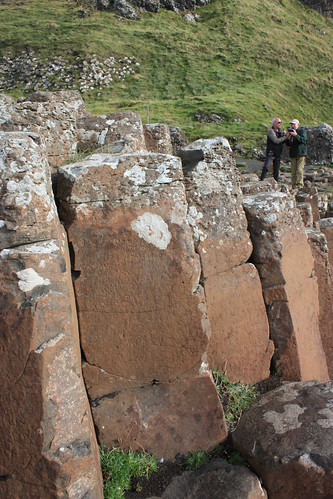 There’s another story, too, about how the Causeway came to be. It involves an Irish warrior named Finn MacCool (Yes, I know. “Finn MacCool” sounds like a spokesman for a light beer circa 1984, but I swear, that’s what he was called), who built a causeway to Scotland in order to fight a giant named Benandonner.

Unfortunately for Finn, Benandonner was much bigger than he had predicted, and when he saw the giant approaching (on his Causeway) Finn freaked out and asked his wife Oonagh for help. (Parenthetically, isn’t Oonagh a great name? Too few monkers out there start with double Os, if you ask me.)

So Oonagh disguised Finn as her very large, very hirsute baby. When Benandonner saw Finn, he believed him to be Finn’s son, and rethought his earlier plans, reasoning that if the baby was that big, he did not want to meet dad. So Benandonner fled back to Scotland, tearing up the Causeway in his path. The broken remains are what we see today.

Since my understanding of geology has never been all that great, I’m going to say that both stories about the origins of the Causeway sound equally plausible.

We walked the road down to the Causeway, passing a point that was supposedly the windiest spot in Ireland. 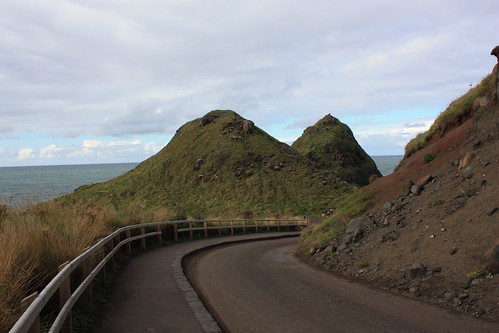 While I can’t definitively say whether or not that was true, the wind was quite intense. I could barely hear my audio guide. Everyone around seemed to be having the same problem. We all looked like we were the quiet end of a one-sided and very confusing cell phone conversation. 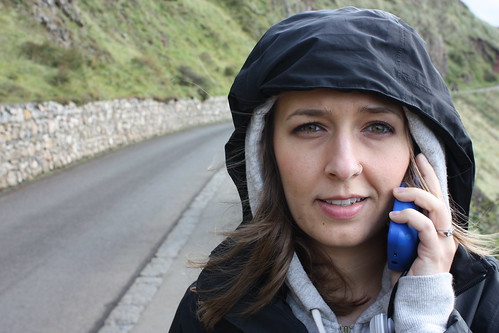 And then we rounded a corner … 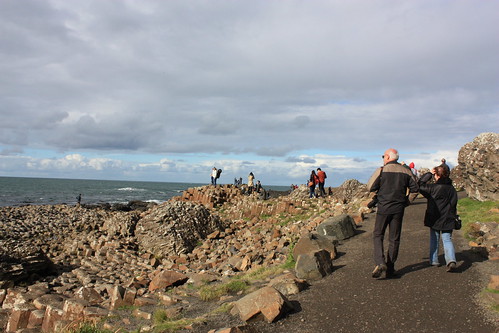 And there it was. 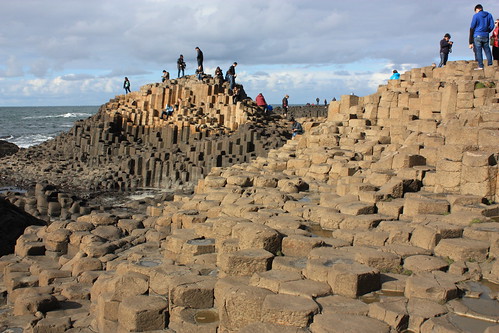 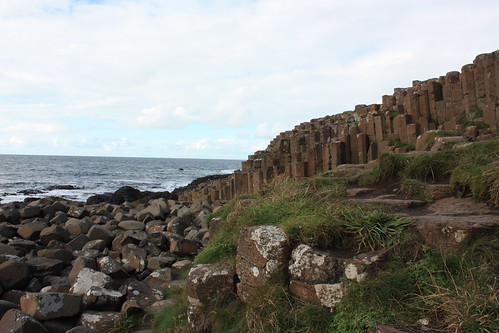 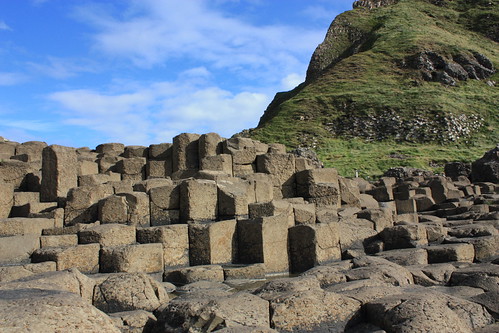 Rather remarkably, you can walk right on it. I guess the people from the National Trust reason that if something can withstand millions of years of erosion, as few hundred thousand tourists in tennis shoes aren’t going to make that much of a difference. 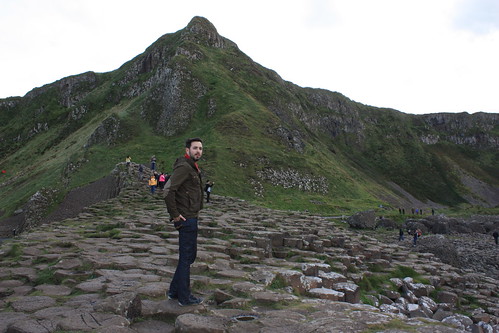 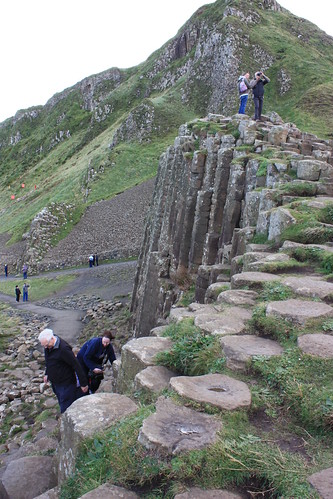 Some folks even appeared to be having a picnic. Which is a nice idea in theory, but, if you’ll notice the sky in these photos, the weather was literally changing by the minute. Sun, then clouds, then drizzle, back to sun again. I’m not one to risk getting my scone damp. 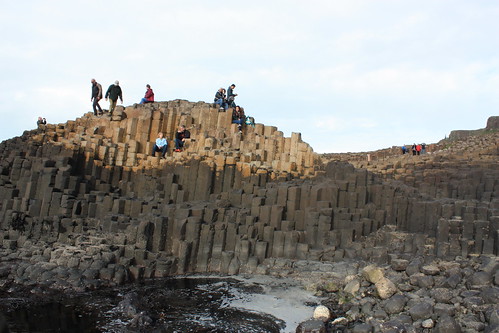 The lingering question, even after we’d read up on the place, listened to the audio guide, and stopped by the visitor’s center, remained: we kept wondering what exactly this place was. It felt more substantial than merely a geological formation. We wanted more of an explanation – the idea of lava flows and fast-cooling basalt sounded too simplistic.

Especially when you consider how wonderful and strange and complex life is. 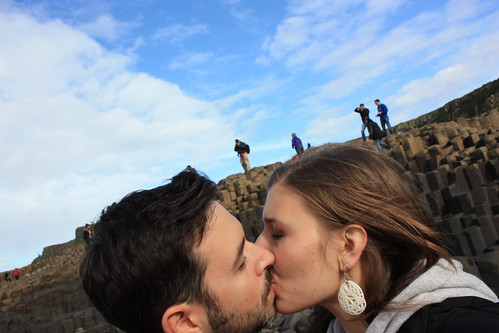 And so the idea that magic was at play, with giants and warriors and clever women wrapping their husbands up like infants, didn’t seem that far-fetched after all.

The Essentials on The Giant’s Causeway: