I am well aware that I owe you guys tons of posts. I need to tell you all about Ireland, and Northern Ireland (yes, the two are different. Don’t for a second think that they aren’t very, very different), and I have gobs to tell you about Milwaukee. Because, man, did I love Milwaukee (it is a town full of cheese and Packers fans. Damn right, I loved it.)

But before I get on with any of that, I would like to share with you the one photo I took last weekend while we were in Boise (yup, we went to Boise, too. Rand and I actually had about 12 hours between getting back from Wisconsin and heading off to Idaho. Flight attendants have started recognizing us. I’m not entirely sure that we should be proud of that).

We headed to the Old Idaho Penitentiary, which was closed sometime in the early 70s. The grounds have since been turned into a lovely botanical garden, and on the weekend that we were there, they were having a Harvest Festival.

Harvest Festival at the Old Penitentiary: it’s just about as awesome as you can imagine. They had these little fried doughnut thingies and candied pecans and bison burgers.

And they had a scarecrow contest. While I told everyone that I thought the scarecrow featuring Rosa Parks and an evil bus driver was my favorite (and it certainly was the most socially conscious of the lot), I think I might have actually enjoyed this one more: 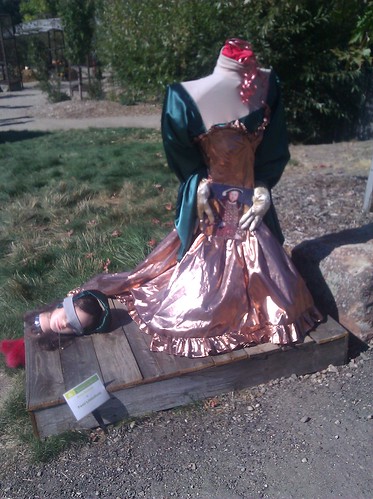 My apologies for the quality of this image. It was taken on my phone, which has spent a period of time in a lake and now acts like it is demonically possessed and takes somewhat shitty photos.

It is a scarecrow of a beheaded Anne Boleyn. And, in a move that was both perverse and darkly brilliant, HER DECAPITATED CORPSE IS HOLDING A PHOTO OF HENRY VIII.

When I saw it, standing as we were in the grounds of the former penitentiary, I did not know whether to cry or laugh.

So I took a photo, instead.