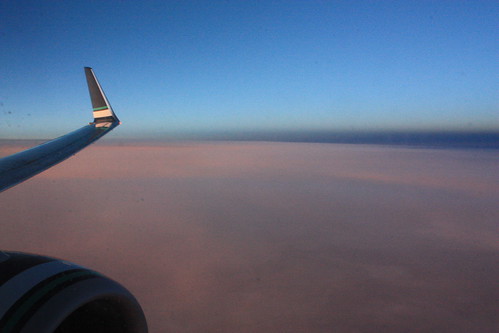 THERE IS A GREMLIN ON THE WING. No, I kid. It’s just a Celica.

Hi! It’s me, Geraldine. You might remember me from such notable trips as AA Flight #476, Seattle to L.A. (the one that was so bumpy, NO SNACKS WERE HANDED OUT, which turned out to be not that big a deal because I spent the evening throwing up, anyway) or last month’s AA Flight #12, Seattle to Boston, during which I could not stop farting (a.k.a., Stinks on a Plane) and also, I lost my camera.

Let me know if that thing turns up, okay? There are some photos on there that I want. In particular, several snapshots of a collage I made of Elvis Presley being eaten by a robotic T-Rex wearing a bow-tie. I used my copy of Alaska Airlines Magazine to create the masterpiece. After all, you said it was mine to keep (also, your editorial staff keeps ignoring my article pitches on how to conceal your farts on cross-country flights. Granted, I am clearly unqualified to speak on that topic.)

I have utterly lost my train of thought.

I wanted to say thank you. And also, to tell you guys to stop wasting the nice seats on me.

Here’s the deal. On my last flight, I was given seat 17A, the window seat in an exit row. My beloved was sitting across the aisle in 17Q or something like that (the alphabet has never been my strong suit).

As far as riding in coach goes (because let’s face it: people like me do not get upgraded. We embarrass the patricians), my seat was pretty swank. It’s got lots of legroom. 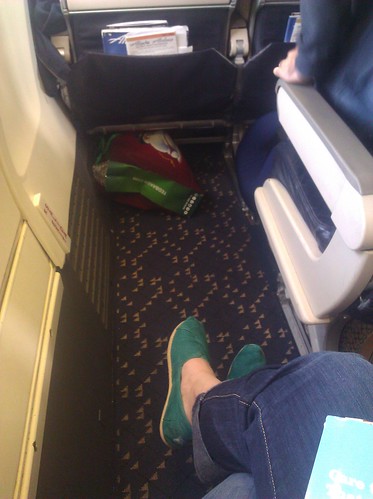 I mean, lots of legroom. The seat directly in front of 17A is missing, either intentionally, or as a result of an incident with the Hulk, or maybe the architect was just drunk. That happens sometimes, you know? How else can you explain Antonio Gaudi? 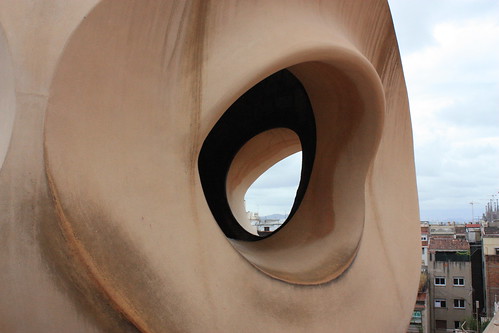 Structure on the top of one of Gaudi’s buildings in Barcelona. Out of context, it looks a wee bit naughty, no?

While this seat is highly desirable, it was utterly wasted on me. I’m 5’2″, which isn’t very tall to begin with, but on top of that, I have “disproportionately short legs.” That’s an actual quote from the woman who taught that spin class I went to once and only once (I was emotionally scarred. Also? Spinning is awful. It’s like torture, except that no matter how many secrets you spill, it won’t stop. After I screamed my social security and pin numbers for the fifth time, I was asked to leave).

I don’t even use the 3/4 of an inch of legroom that regular airplane seats have. Even after I shove my bag underneath the seat in front of me (nobody does that, by the way. I’ve been watching), I still have gobs of room. Sometimes, my feet don’t touch the floor. They just dangle, much the way a child’s would.

If it sounds like I’m bragging, it’s because I am, just a weensy bit. It’s not often that a girl with “disproportionately short legs” (seriously, I should get that trademarked) has a leg up on everyone else, you know?

Also, did you notice that pun I just made? Go back and read it again, if you missed it. It’s very clever.

So what did I do with all the space I had on my last flight? I tried slumping down in my seat and extending my legs as far as they would go, just so I could say that I tried to appreciate the gift given to me, but people started staring and pointing.

“What the hell is the girl in 17 A doing?” someone asked.

“I don’t know,” someone else replied. “I think she’s drunk. And she may have designed the plane.”

Also, my extra legroom meant that my bag was waaaay up ahead of me, making it very difficult to reach the cookie I had in there. I finally got to it after we landed, but by then Rand had seen it and I had to share with him.

I would have much rather had the aisle seat, since I have a weensy bladder and need to get up often, but the guy sitting there thought I was kidding when I said I had too much legroom, and LAUGHED OFF MY REQUEST TO SWAP SEATS.

So I sat there, with my gobs of unused legroom and my full bladder, and tried to think of other things, but then I started obsessively dwelling on the fact that I was in a exit row.

Officially, let me state that I don’t have a problem with sitting in that row (I have clicked many a button confirming this fact while checking in online). You can be damn sure that the second anything goes wrong on a plane, I will be out of my seat and ready to use my pillow as a flotation device. Sometimes I bring my regular pillows into the shower, just to practice.

It’s just that I’m not sure I should be the first person with access to the door in case of an emergency, you know? I’m worried I might jump the gun and try cranking open that sucker in the event of something minor, like when someone gets a paper cut on their copy of US Weekly, or when the beverage cart runs out of Bloody Mary mix.

Plus, I’ve heard that the door weighs 50 pounds. Occasionally, I’ve tried lifting 50 pounds at the gym, and I can definitely do it, but damn – that’s a lot of weight, you know? Sometimes when I’m working out, I have to inspire myself, so I start screaming stuff like, “Don’t worry, fellow passengers, I WILL SAVE YOU ALL,” while bench-pressing.

That gets me almost as many weird looks as the seat slumping I mentioned earlier.

Anywho, please give some thought to the points I made in this letter. I can’t really remember what they were, but it was probably something important.

P.S. – Please consider handing out more of those Biscoff cookies. Those damn things are delicious.