Skip to content
Posted in: Lost in Translation, Nothing to Do With Travel, WTF, WTF Wednesdays 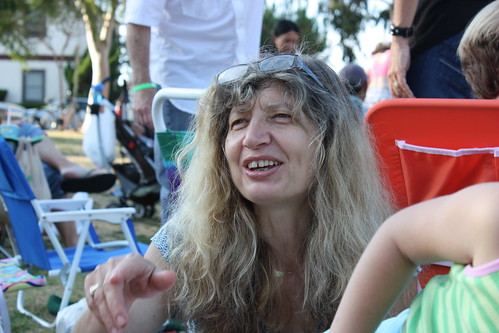 I’ve just returned from California. I spent several days spent in the company of my family, which is always a fascinating experience. Nothing makes me question reality more.

I’ve tried explaining to my friends that my relations see things differently than the rest of the world, but my point is often lost.

“All families are insane,” they say, nodding sympathetically. And then they’ll tell me about some aunt of theirs with an excessive collection of hat pins and no hats, and laugh at how ridiculous the whole thing is.

It is all I can do not to grab them by the front of the shirt and gently hiss, “Really, pumpkin? HAT PINS? That’s the best you can do? Because until your auntie leads a massive police chase through your hometown while wearing nothing but a nightgown, I don’t want to hear about your damn hat pins.”

Until your mom gives you and your brother copies of Twilight: The Board Game for Christmas (with the enigmatic explanation of “You know how people who work for the same company always get the same gift from their bosses?”) YOU DO NOT HAVE GROUNDS FOR COMPLAINT.

Until your uncle steers your auntie (a different one; not the police chase one) through street traffic while she’s in a wheelchair BECAUSE HE SAYS THE ROAD IS SAFER THAN THE SIDEWALK, you can just sit down and hush up.

Trust me. I win the crazy family pageant. I have sashes upon sashes which I layer upon my body like a straight-jacket.

But just in case there was any doubt, let me share with you a rather interesting exchange I had this past Thanksgiving weekend with my mom.

I don’t actually remember how it began (really, who can say how the seeds of madness are sown?), but it had something to do with Halloween. My mother was remarking that sometimes people dress up as unfavorable historical characters to make a political statement.

I disagreed with her assertion. For example, I think when Prince Harry dressed up as a Nazi several years ago, he wasn’t so much making a statement as he was making a grievous error in judgement (for which he later apologized). I said as much to my mother.

“I think dressing up as someone – even for Halloween – is a tacit endorsement of them. So you have to pick someone you are a fan of. You can make a political statement, but it has to be someone favorable,” I said, thinking of this clip from Louis C.K.’s show. “Otherwise, it’s just bad taste.”

“So then why did Rand dress up as a pedophile for Halloween?” my mother replied.

“He was Jerry Sandusky.”

“The Boy Scout costume he wore.”

My mother sighed in frustration. BECAUSE CLEARLY I AM THE CRAZY ONE. She then explained to me that she was under the impression that this year, Rand had dressed up as former assistant football coach and convicted serial child molester Jerry Sandusky.

For the record, here is a photo of Rand and me on Halloween. 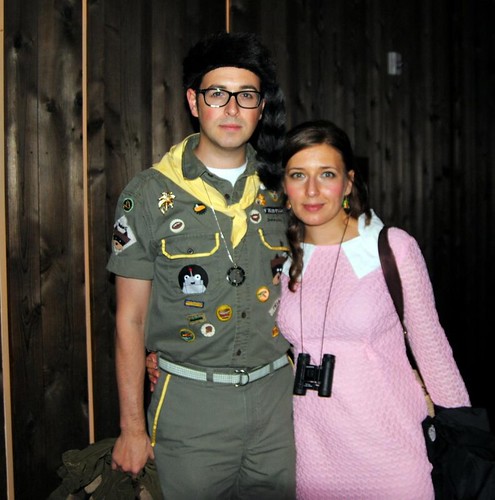 We dressed up as the kids from Moonrise Kingdom. On Facebook, I noted this, mentioning that Rand’s character’s name was Sam Shakusky, and that I had dressed up as Suzy Bishop.

Now, I haven’t really been able to follow my mom’s logic (because I’m pretty sure there isn’t any) but here’s how it went:

And that’s it. That’s my mom’s reasoning behind why she thought that this rather sweet scene … 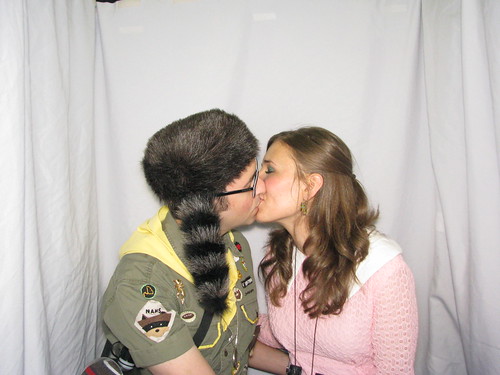 … was actually us recreating a pedophile and his twisted, enabling wife.

Although in hindsight, it does explain the confusing phone conversation my mom and I had shortly after Halloween.

Me: Did you see our costumes?

Me: Weren’t they adorable?

Me: You didn’t think the costumes were cute?

Mom: Well … you know, you made a statement. Which is what you wanted to do.

After I explained to my mom what our costumes actually were, I think she felt a little guilty about her assumption that we would dress up as people as reprehensible as Jerry and Dottie Sandusky. After she and I had cleared the air (which took the better part of an hour, mind you), she posted a picture of me and Rand to her Facebook wall. Note my brother’s reply. 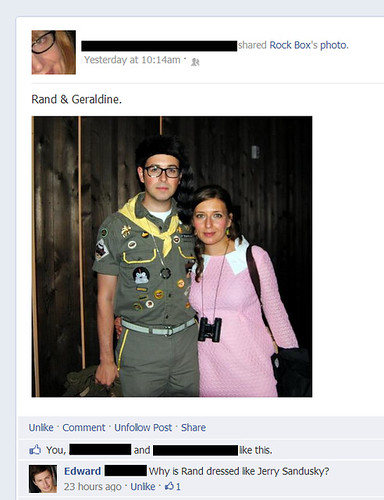 I thought his comment was hilarious. Mom didn’t appreciate it all that much. But I’ve learned that she and I? We see things differently.