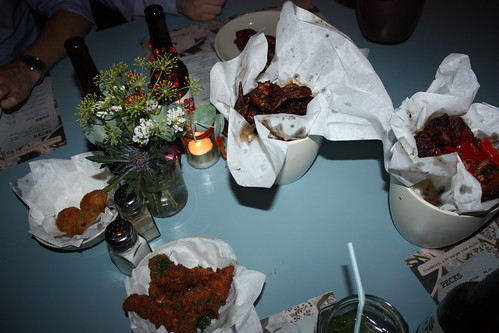 Some of the fowl offerings at Crackbird.

I walked into Crackbird with a bit of trepidation.

It’s an immensely popular restaurant in Dublin, and they specialize in fried chicken – as well as grilled and roasted – but fried is their signature, and the name of the restaurant is a play on its apparently addictive qualities.

They want you to describe the birds they cook as being like crack. And, frankly, that’s not how I would put it.

Despite my family’s European roots, I grew up on fried chicken. It wasn’t that we ate it all that often, and it was rarely store bought (though occasionally, on days when my mother had class, or my grandparents had to be driven to doctor’s appointments, or when no one could be bothered, it was). My mom would while away an afternoon dredging and battering chicken, and gingerly placing it into a cast-iron pot filled with oil.

The stove top would bubble and foam and splatter, eventually yielding gorgeous, golden-brown pieces of chicken.

I remember it, because despite the garlic powder present in the coating, and the fact that it was often cooked alongside a pot of pasta, it was one of the truly, quintessentially American parts of my upbringing. We’d tear into pieces while they were still scalding hot, so that we were immediately forced to leave our mouths half open, frantically waving our hands to cool down the bites we’d taken.

God, we were dumb. But it was because we truly, genuinely could not wait a second before eating that damn chicken. It was delicious. And every now and then my mother would pop in from the kitchen, grab a piece from our hands (claiming that she needed to see if it was cooked) and would steal a bite or three, at which point we’d yell, “HEY!” despite there being plenty more pieces on the table.

I remember it fondly. And even if I manage to wipe away some of the nostalgia and try to see that chicken for what it was, I can still tell you – it was damn good.

Crackbird does not compare to that chicken. There is no way it ever could, and it is perhaps unfair to expect it to. The chicken is decent, and available in a myriad of preparations, and served with your choice of a half-dozen sauces.

But to an American, to anyone who regards fried chicken as part of their cultural identity, it lacks something. It might be buttermilk biscuits. It might a legacy of cooking this meal for generations. It might be salt.

But something is missing. 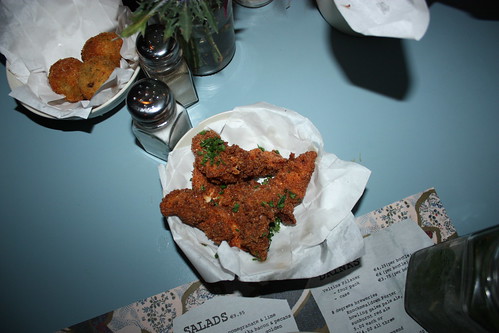 I walked in suspecting this would be the case, treading warily to our table, and perhaps this was why Crackbird didn’t quite measure up – my expectations had already made doing so nearly impossible.

The soy garlic marinated chicken was good, but it was (proverbially at least) another animal entirely. 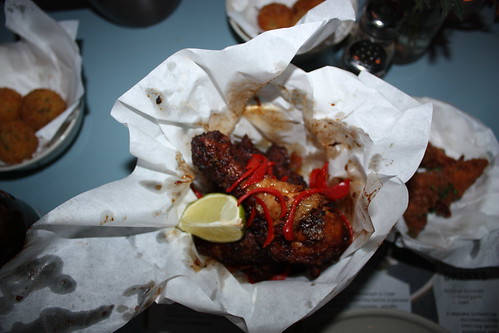 Seeing the fowl cornucopia that had been ordered by our group (“For the table”, Rand and others kept saying, so much that I’ve started wonder if that phrase wards off calories. I’ve whispered it to myself before eating a large bowl of gelato, and the results thus far are inconclusive. I will keep you posted.) I was able to convince the waiter I was responsible by ordering the spinach and pomegranate salad, topped with the chicken brochettes. 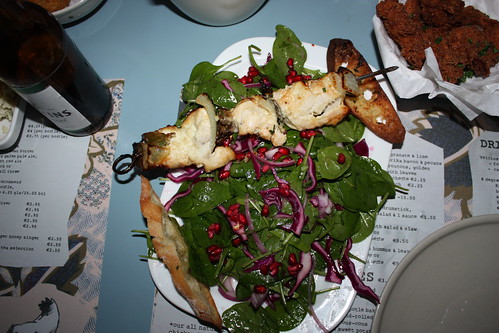 And in the interest of honesty, I will tell you: I didn’t know what brochettes were when I ordered them. But the word sounded a bit like “briquettes” so I figured they would be approximately the size and shape of those pre-pressed pieces of charcoal that we used to buy before the Fourth of July every year.

Incidentally, they were, but this was purely by a stroke of luck. Brochettes actually have little to do with briquettes. It comes from the French word for skewer, and refers to meat that is cooked in that manner.

The salad was overdressed and not quite acidic enough. The brochettes were a tiny bit dry – easy remediable by the small tub of burned-lemon and feta dip that I had ordered. The combo was nice, and satisfying.

But it was not my mom’s fried chicken.

Indeed, the best part about Crackbird turned out to be the company and the conversation we had with the locals who had led us there. It was splendid and animated, full of stories that you wish were your own to tell. 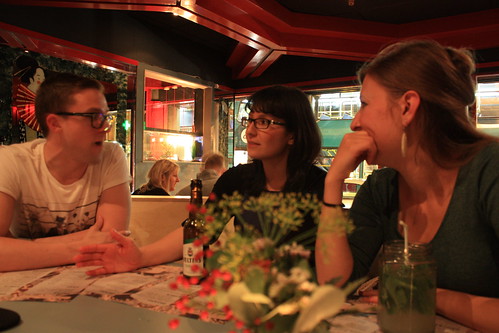 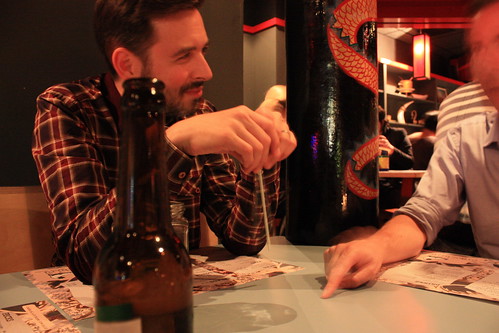 And when I think of our talks and that night? I remember the chicken tasting better than it was. And I start wondering if that had been my mom’s secret, too.