Walking down a crowded street on a rainy night in Dublin, we heard the distinct sounds of people watching an outdoor movie.

I can’t specifically say what the noises were – it’s strange how despite the thousands of films in existence, and the myriad of soundtracks and dialogues and moods expressed therein, they all start to sound alike when played through outdoor speakers.

It doesn’t matter if you are watching The Princess Bride or The Exorcist (for my sake, I hope it is the former.) 90% of them have scratchy ambient sound, a bit of heavy-handed dialogue, and a soundtrack by John Williams.

I dragged Rand towards the noises, and sure enough, we found a small square where groups of huddling Dubliners sat, watching a movie in the damp of the night.

It took me a while to recognize what was being projected onto the wall adjacent from them. And when I did, I flashed back to my pre-teen years, of slumber parties and popcorn eating and YM quizzes that never gave me definitive answers (“DAMN IT, DOES HE LIKE ME OR NOT?”). 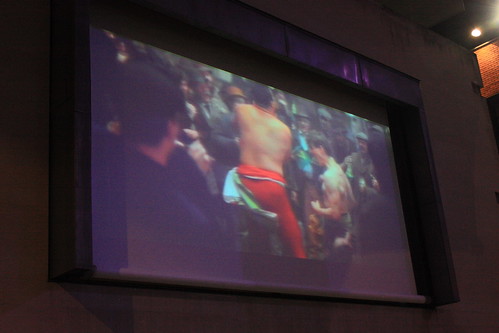 SHIRTLESS TOM CRUISE BEFORE THE CRAZY. (And also shirtless some other dude.)

Rand stared at me blankly. I grabbed the front of his shirt.

“FAR AND AWAY,” I said again, shaking him slightly.

“I don’t know what that is,” Rand replied.

And I promptly slapped my forehead against his chest, remembering that my husband grew up without much access to TV or movies. Basically in a cave.

“Seriously?” I asked, horrified, but not altogether surprised. “This movie is AMAZING. It’s two hours of Tom Cruise doing a terrible Irish accent and chasing Nicole Kidman around old-timey Boston.”

“I … really? That sounds terrible.”

“NO. It’s amazing. It was made when her hair was still red, and before he went crazy on Oprah’s couch. Last time I saw it I was 13, and it was incredible. I can only assume it stands the test of time. WE ARE MOVING TO DUBLIN IMMEDIATELY.”

“Wait, why? You said the movie took place in Boston.”

“Yes, BUT THEY DON’T PLAY FAR AND AWAY ON OUTDOOR SCREENS IN BOSTON. THEY ONLY DO THAT IN DUBLIN.”

“Why don’t they play it in Boston?”

This gave me pause.

(At this point, my dear husband gave up. And I watched a little bit more of the movie before I realized that I was freezing and needed dessert. The end.)