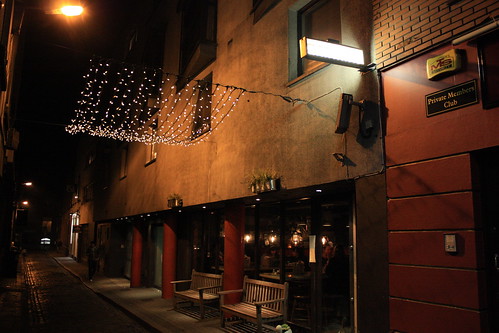 The easily missed facade of Skinflint.

Truth be told, it sounds rather dirty. Like, “Did you hear about Janine? She caught skinflint while riding on the subway.” Or, “I’ve heard he’s done a lot of things in the past that he’s not proud of. Like, you know … skinflint.” Or, “Be sure to scrub between your genitals and your leg.”

I realize I forgot to use “skinflint” in that last sentence. But I left it there, because it’s just sound advice.

Skinflint, as it turns out, means cheap or miserly, and is a more commonly used piece of slang in Ireland than it is over here in the states (where I’ve heard it approximately never). Regardless, though, it seems to serve as a rather odd, and faintly unappetizing name for a pizza restaurant (does ‘skinflint’ refer to the patrons or to the proprietors? Is the chef delivering an inferior product in order to cut costs? Or accusing us of being lousy tippers before we’ve had a chance to prove otherwise?) and for us Americans, we’d the added problem of struggling to remember the name.

“Was it? That seems like a terrible word to have in the name of restaurant.”

“I know, but I think it was. Skin something. Skinflack? Is that a thing?”

“I think that’s an old-timey ailment.”

“I think it could be Skinsnack.”

“It very well may be, but if it is, we aren’t eating there.”

We eventually did make it to Skinflint, a dark and hip little restaurant that had come recommended to us by several Dubliners. It’s run by the same folks behind Crackbird, and while the experience was strange and fun, I don’t know if we enjoyed the food quite as much as we had at the other establishment. 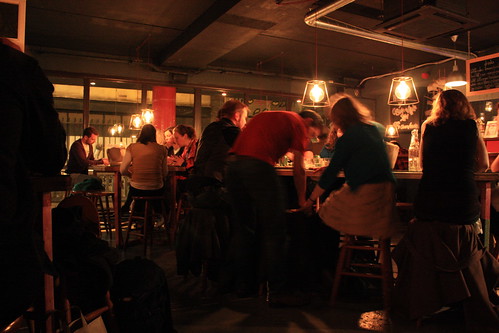 Behold the hip and blurry Dubliners at Skinflint. 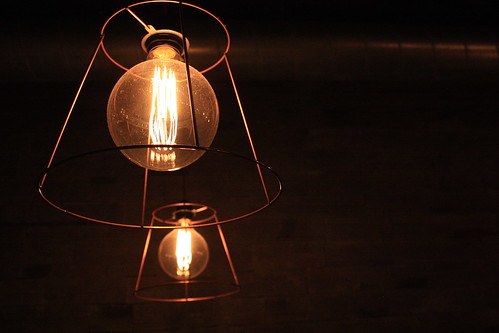 They serve flatbread pizza, as well as a variety of starters that don’t seem to really go with pizza (slow-cooked ribs? Hummus? Pate?).

Rand and I decided to go forgo the appetizers and went straight for the pizza. Mine was one that doesn’t seem to appear on the menu all the time (unlike the Vonie, which is a popular choice, though some say it is merely meh. The tomato sauce has been replaced with harissa) – a mushroom pizza (porcini, I think) dusted with truffles. 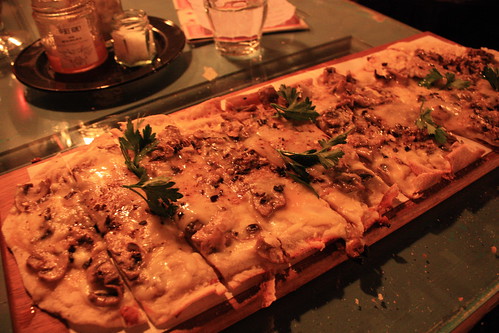 Rand’s had chorizo and pecorino. 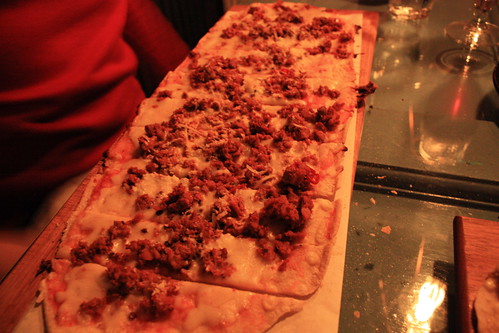 Each one arrived at the table in one long piece, atop a large slab of wood. Our waitress then  deftly pulled out a seesaw like knife and rocked it back and forth along our pizzas, quickly dividing them into pieces. A bit unnecessary, perhaps, but ever suckers for tableside service, we loved it.

The pizza itself was good, but not great. It arrived at our table lukewarm, which is fine, if you consider that this is a food that can acceptably be eaten cold (though I never have, and never will). But I prefer my cheese to be oozy and runny, and not slightly congealed.

The crust was thin and crisp – near the edges, it shattered like a cracker. Towards the inside, the pizza was softer, which would have been fine had the dishes been hotter. Given that they were room temperature, the contrast between the center and edge of a the crust made it seem like it had grown unpleasantly soggy.

The flavors on each of ours were excellent. Mine was surprisingly mild, Rand’s delicately spicy. I couldn’t help but think that had the execution been slightly better, or had we been hungrier, or perhaps drunker, the pizza would have been nothing short of superb.

And perhaps that’s Skinflint’s target demographic. Stoned hipsters who’ve wandered in from the many pubs of Dublin, looking for a bite, but refusing to get kabobs. They flock to Skinflint, delighted to find something both highbrow and trashy.

How else can anyone explain the logic behind keeping a small pot of honey on every table, so that diners can drizzle some onto their pizzas? 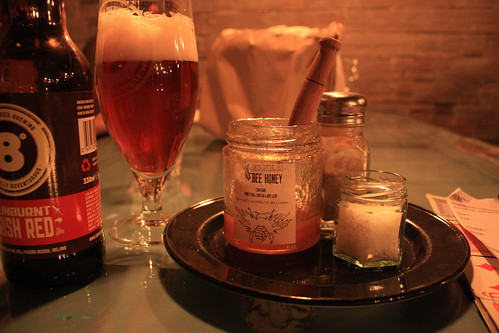 Of course, despite being sober, we had to try it. 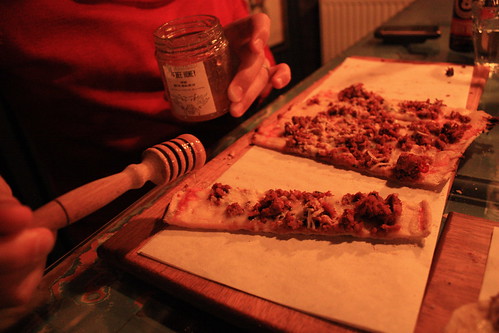 Really, the same could be said of our entire experience at Skinflint. It all kind of worked, but fell just short of the mark. Perhaps they will iron out the details (and our food will be served hot, our drinks will arrive at the same time as our meal, and we won’t need to tackle a passing server for a bill). Or perhaps it will remain as it is, catering to those slightly too buzzed to notice the imperfections, who only see the brilliance of the place, from the lighting to the honey to the signs on the bathroom doors: 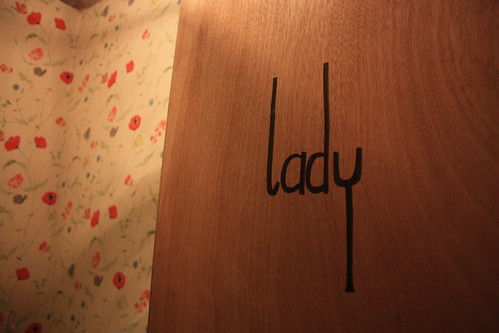 There were three stalls in all. 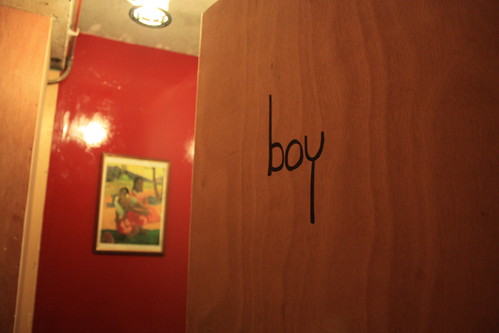 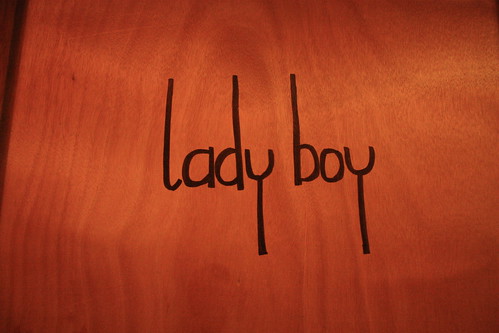 Guess which one I used.

–
If only the pizzas had been executed so well.