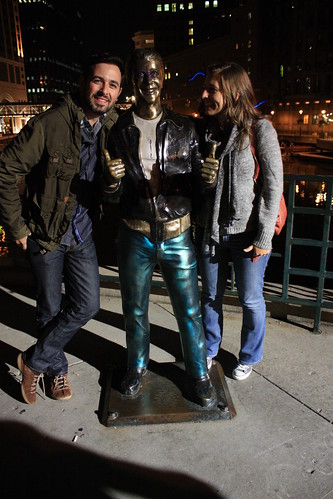 There are moments of my life that are so perfect, so ridiculously wonderful, that eloquence fails me.

You’d think that those would be the times when words would come most easily. But when you are surrounded by poetry, it is incredibly hard to create more of it. You simply look around, stupefied, and think, “Heh. This … awesome. Life … good. I … happy.”

That’s what happened one night when we were walking along the river in the Milwaukee.

Yes, Milwaukee. (I will kindly ask that you not look so surprised.)

By then, I was already sold on the town – I had started imagining what my and Rand’s lives would be like once we moved there (my checklist included: “buy a Packers jersey” and “learn to like beer”). It’s something that I’ve wanted to do since I was a kid. Of course, at the time, I didn’t realize it was Milwaukee – I just knew I wanted to live in the same world as Fonzie and the Cunninghams, to be neighbors with Laverne and Shirley.

(Parenthetically, I think one of the great missteps of my life is that I never found the Laverne to my Shirley. Which, after enough years, made me suspect that perhaps I was the Laverne. But while I have the nose and the personality and the Italian ancestry, I don’t have the height.

Clearly, I have put waaay too much thought into this.)

And no, my wee brain didn’t register that those shows took place in the 1950s. I just figured that was how people dressed in the Midwest.

Milwaukee was so imprinted in my psyche that, even though I was seeing it for the first time, it felt familiar. Like I was finally meeting a not-so-distant relative that I’d heard so much about.

I was relishing in that feeling, one of long-awaited wholeness, as we walked around on a not-too-chilly night. Suddenly, our guide – a local – asked us if we had seen the Bronze Fonz.

“The Bronze Fonz!” she exclaimed, staring at us.

And then she ran off into the night, the rest of us, bewildered, taking a moment before following her.

By the water, she stopped, the rest of us at her heels. There he was, just as advertised: a bronze statue of Arthur H. Fonzarelli. A.k.a., the Fonz. 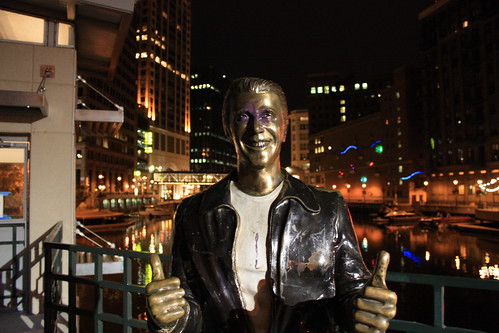 Some jerks had poured purple paint on him. People are animals.

He is not unanimously loved; a lot of people seem to hate the “Bronzie”. It’s been vandalized a number of times, with one local gallery owner closing up shop in protest of its arrival.

And indeed, there is something odd about it – the face belongs to some alien cousin of Henry Winkler’s. The forehead is too short, the hands are too large, and the scale is off just slightly. I think the Fonz was taller. 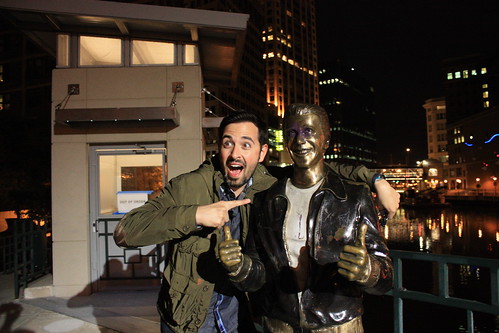 The complaints extend beyond just the aesthetic: that the $80,000 price tag was far too steep. That Milwaukee is far more than a setting for long-cancelled television shows which, if we must be perfectly, painfully honest, weren’t that brilliant even in their heyday.

But for me, it was my childhood, cast in metal, glimmering by the river on a calm Milwaukee night. And so I loved it.

It was all so wonderful, and silly, and surreal, that words failed me. They tried to form, but could not fulfill their office. 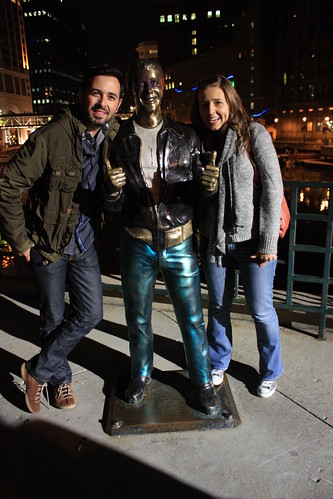 So I simply smiled, which soon turned into laughter, and all the while, a silent “Ayyyyyyy” played in my throat. Eventually I whispered the catchphrase, barely more than a sigh, and that was enough. There was really nothing more to say.