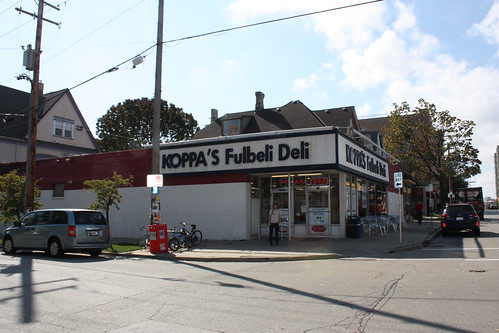 How things that are strange and weird become familiar and every day. So that after a while, we forget that they’re even all that strange, until someone else points it out to us.

When we first moved back to Seattle from Florida, nearly 20 years ago (good heavens, the years. They are slippery little suckers, are they not?) my mother and I were faced with an odd problem. Our home felt far too empty. My brother had gone off to college, so it was just the two of us, living in far more square footage than we’d ever known.

We dealt with the problem in the usual way: we bought a mannequin.

When we first met Melba, as my mother later named her, she was a mess. Horribly clad in an old shirt and shorts, with a miserable grey wig that was doing her no favors. She was missing a hand, or possibly two (I forget now), and so the sign for the garage sale she was advertising was taped crudely to her chest.

“How much for the mannequin?” my mom asked.

The gentleman running the sale stared blankly at us. “You … you want her?” he asked us, as though we were the crazy ones. I mean, he was the guy selling a perfectly good (except for her missing hands) mannequin.

“I’ll give you ten bucks for her,” my mother offered. He negotiated us up a few dollars more. And that night, we loaded Melba into the car, and took her home.

We gave her a makeover: a long black velvet dress, a shorter, much-improved wig. We touched up her face, and my mother stuffed leather gloves with newsprint, which served as make-shift prosthetics for her missing hands (because actual mannequin hands are hard to find. Who knew?)

In the end, she looked like a young Raquel Welch.

Beloved as she was, at first, Melba startled me. I’d round a corner and, having forgotten she was there, would clutch my heart and gasp every time I saw her.

“Right,” I’d think, trying to regain my composure. “We have a mannequin now.”

Over time, I grew used to her. My mother and I would decorate Melba for the holidays; we’d say goodbye to her as we left the house, hello when we returned.

And as years passed, I forgot that she was something rare and strange.

The first time I brought Rand home, he froze in the doorway when he saw her.

“Um …” he said, staring blankly at her tall, silent figure.

“Huh? Oh, that’s just Melba,” I said, and walked right by. And now, whenever we visit my mother, Rand barely bats an eyelash at the mannequin in the corner.

That’s kind of how things went at Koppa’s Fulbeli Deli in Milwaukee. Our friend and Rand’s colleague, Jamie, recommended the spot. He’d spent plenty of time in Wisconsin (his wife went to school there), and he became our unofficial guide during our trip.

From the outside, the place looks small and unassuming. 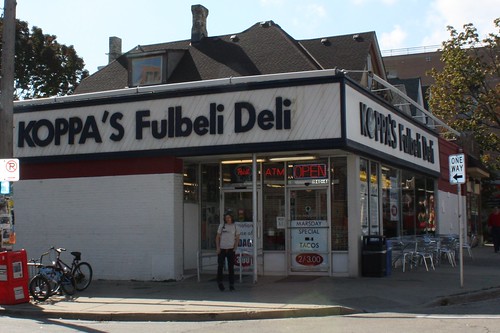 But the inside … well, it looks like my mother was hired as interior decorator. It’s just pure, delightful madness. 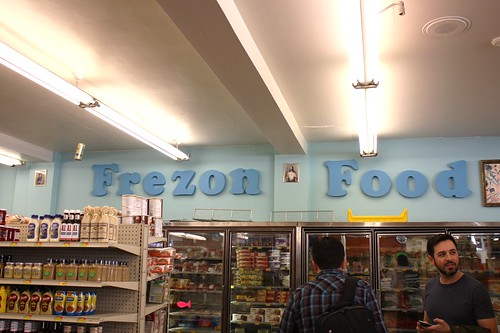 The best part about this picture is the WTF look on Rand’s face. 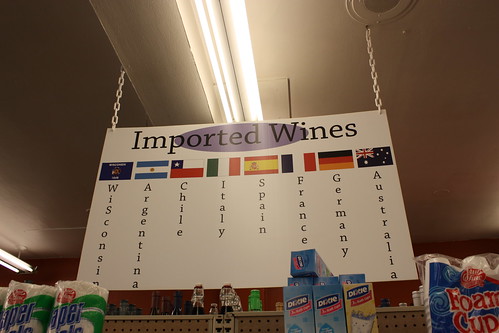 As we walked through, Jamie noted that he’d forgotten how strange it was. Over the years, he’d just gotten used to it. Everyone there had. Rand and I were the only ones fazed by it. I took photo after photo, and the staff stared at me like I was a madwoman. 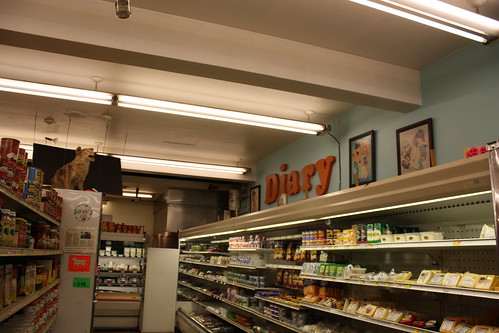 “What intrigues me so? I don’t know … how about the Dairy case with transposed letters surrounded by illustrations from the early 1970s?”

It was just like me with Melba – they no longer saw the strangeness of it. We’d stopped in the doorway and stared blankly, but to them, it was commonplace.

Or, in this case, 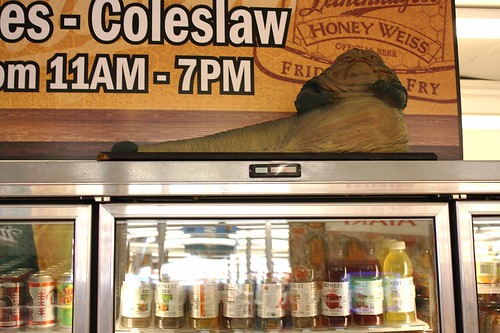 “That just the poorly taxidermied coyote in the milk aisle.” 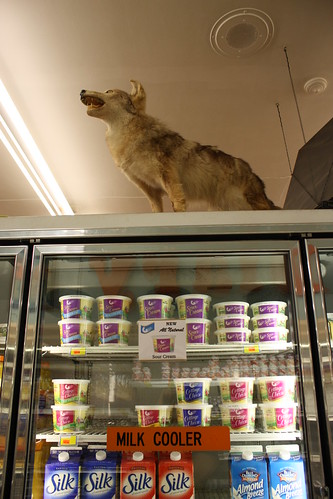 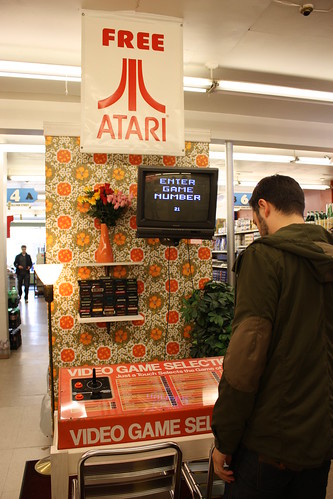 “And, what, you’re taking a photo of this? Why on earth would you do that? Haven’t you seen an end cap turned into a living room vignette before?” 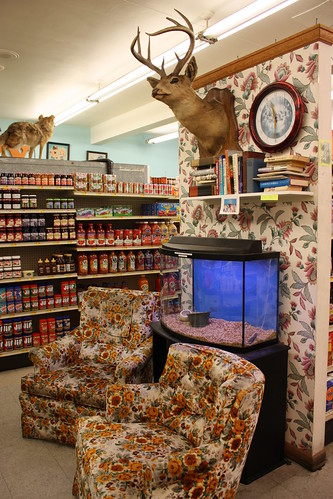 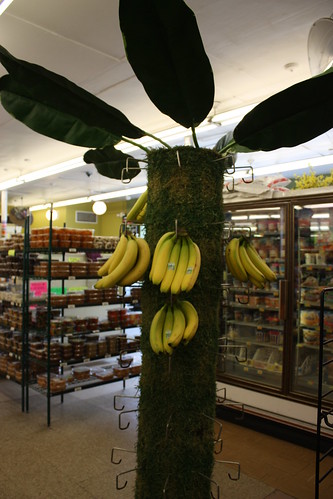 We have them. Just not usually on huge fake trees.

At least the copy on the packaging was normal, right? 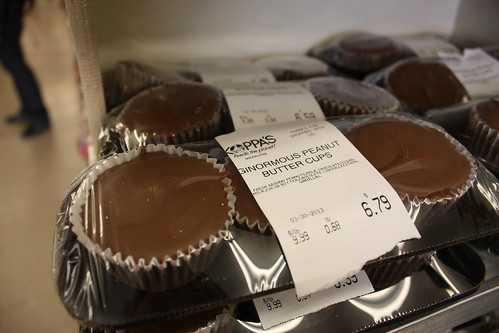 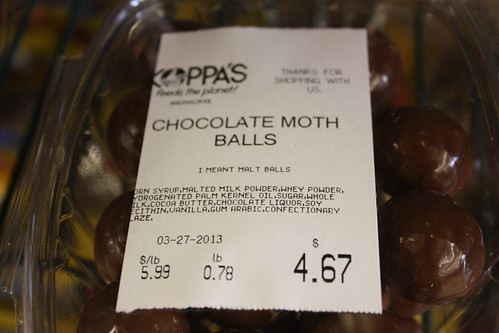 This brought me so much delight, I ended up purchasing two packs. 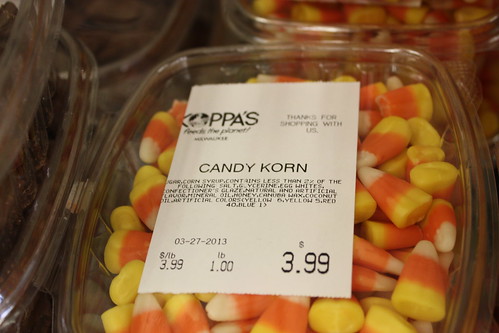 Parenthetically, there is a band in Seattle called “Creamed Korn” and they only play acoustic versions of Korn songs. True story.

At least, I thought it was normal at the time. But by then, we’d been inside Koppa’s for a while. Everything was becoming familiar. Everything was a little less strange. 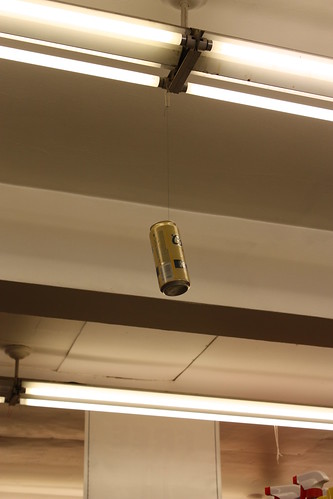 Oh, look. A Coors can hanging from the ceiling. Whatever. No big deal.

Heck, it was even starting to feel like home.