(Note: I just got back from South Africa yesterday. My brain has absolutely ZERO idea what time it is. I contemplated blogging last night, but I was deliriously tired, and acting slightly more crazy than normal. At one point, I may have fallen over my husband in the kitchen because I wanted to bite his arm. When he didn’t acquiesce, I started whining like a four-year-old.

So he let me bite his arm.

I’m still kind of out of it, but I’m pleased to say that the attempts at spousal cannibalism have become far more infrequent since that episode. I’m going to try and get my bearings over the next few days. In the meantime, I’ll be posting about a few trips that we had prior to South Africa, that I haven’t gotten around to telling you about. Enjoy.) 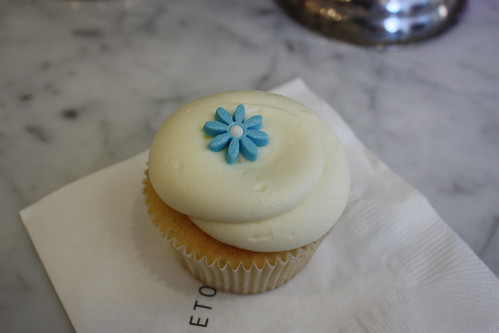 Like any good alchemist, I spend a lot of time at home trying to turn lead into gold. Or, more precisely, flour, sugar, butter, eggs, and a bit of vanilla into cake.

I usually have more than a modicum of success at it. I’ve become a pretty accomplished baker over the years (and an even more accomplished eater).

But every now and then, I have a misstep. Last weekend, I attempted to make some oatmeal butterscotch cookies. And while the chemistry behind my error eludes me, I will say this: they did not turn out as planned. Rather than form anything remotely resembling a cookie, they spread out and fused together into a thin lattice.

I pulled the cookie tray out of the oven and stared at my failure. I poked at it feebly with a fork.

And then I figured, what the hell, I might as well try a bite. It was either that or the trash. I gently forked up a morsel. Then another.

By the time that Rand came into the kitchen and found me there, the pan was already half consumed.

He stared at me for a moment. I opened my mouth to say something. To try to explain to him that contrary to appearances, I did have some degree of willpower. That I was better than this. Really.

But before anything came out (remember, my mouth was full of butterscotch-flavored failure), Rand grabbed a fork and polished off the rest of the tray.

God, I adore him.

The point is this: in my love life, I am discerning. In the world of baked goods, I am not always so.

The cupcakes at Georgetown Cupcake in Boston, are on the opposite end of the spectrum as my cookies. The bakery started in D.C., and has several locations, including one on Newbury Street. 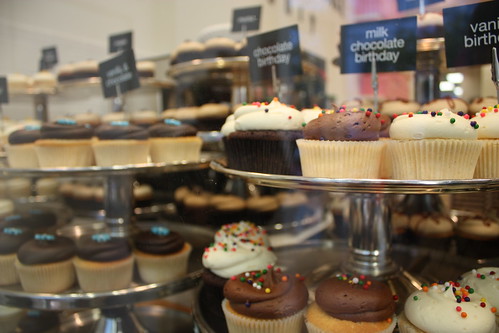 Their confections are pretty to look at, and hold together nicely. But they aren’t so good as to justify frenzied eating right out of the figurative pan. You will not find yourself, after you’ve finished your cake, pressing your finger against any crumbs that may remain at the bottom of the box. 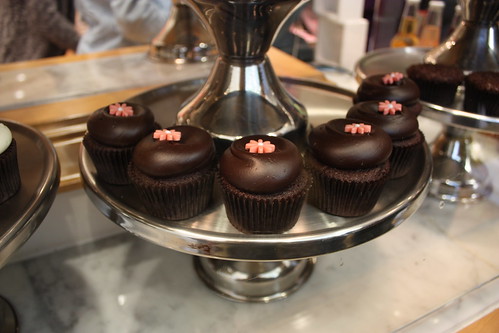 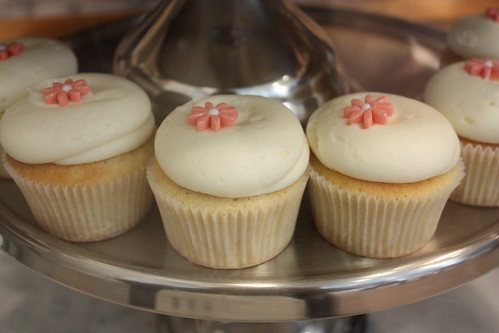 Look, none of this stopped me from eating three of them, but I think I’ve made it clear that sometimes I can’t be trusted.

The shop is adorable, nestled in the row of brick buildings that line Newbury street, blending in so well that the storefront would be easy to miss. The line is formidable, and it’s best to get the cakes to go, since there’s not much seating inside. 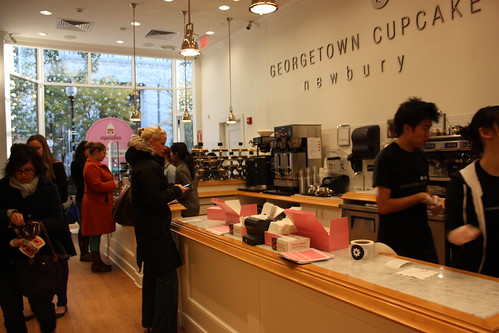 The cakes have a dense, grainy crumb (think cornbread), a feature which I’m not opposed to. They aren’t terribly large, but are on the expensive side. Half a dozen cupcakes set me back about $20. The frosting was thick and almost gummy – many of the vanilla variants were cream-cheese based.

I wasn’t thoroughly impressed, but a friend who managed to rifle a mocha cupcake away from me declared it one of the best she’d ever had.

Like someone in a doomed relationship, I stuck with it, hoping things would improve. I took bite after bite, thinking, “This next one will be better.”

It’s not that I would advise you to steer clear of Georgetown cupcake – it’s just that I felt somewhat let down. The cute storefront, the adorable boxes … all of that built me up, while the cupcakes themselves fell flat.

There was a lesson to be learned here – within a few days, it was practically screaming at me. We were in Chinatown, and Rand told me that he’d heard there was a good cake shop nearby (I know I said it before in this post, but it bears repeating: I adore him).

The facade of Eldo Cake House was not particularly noticeable. The interior was equally forgettable. 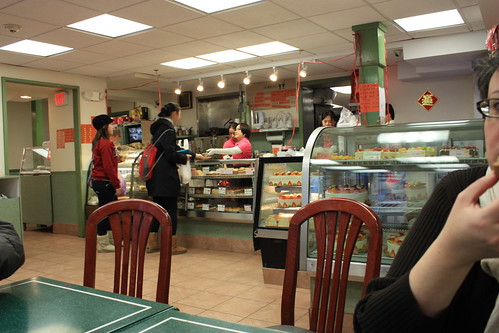 The desserts were simple, and ridiculously cheap. $2.00 for a generous slice of spongy cake, filled with fruits and cream. $0.80 for a rolled slice of cake with cream filling. 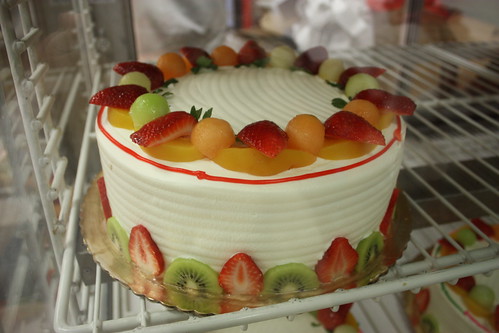 Having been burned before by Boston’s dessert scene, I took a tentative taste. Yes. Yes, this was going to work.

“Do you want a bite?” I said to Rand, though I made no move to offer him one.

He nodded. “It’s cool,” he said. I’ll grab my own fork. A wise decision, as I showed no signs of relinquishing mine. 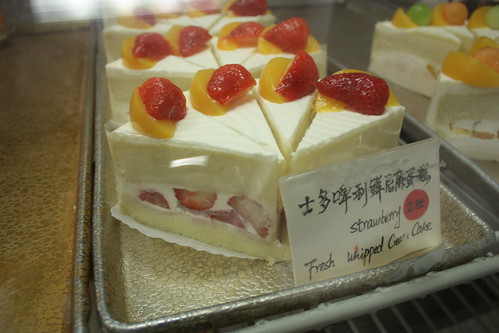 He wasn’t gone long. Perhaps a 10 seconds. Maybe 15. And while it was not my intention, by the time he returned, the cake was gone.

“Should we get another slice?” I asked, somewhat guiltily. Rand merely smiled and shook his head. He knew as well as I, that had we ordered another piece, he probably wouldn’t get to try that one, either.

Because sometimes it’s now how your dessert looks. It’s how it tastes, as you quickly mash it down your gullet, in moves so quick, they look like a blur.