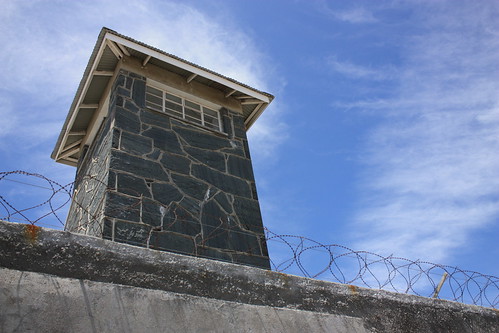 I have a problem with mixing up beauty and goodness. I am fully aware of how bad this is.

I mean, I’ve seen Snow White, guys. I get that the evil queen can be both hot and, well, evil.

But I still have trouble getting my head around that fact. I just can’t get past the fact that something can look one way, and be totally different. (For the record, the converse is not true for me: I don’t assume that everyone and everything ugly is evil. Even though I’ve had some I’m-wearing-sweatpants-today-and-I’m-in-a-rotten-mood moments that would affirm that idea.)

Sometimes beautiful things belie their horrible true selves. That’s the case with Robben Island. I know that awful things happened there. The relics remain: the narrow cell where Nelson Mandela spent the better part of two decades, the limestone quarry where he and other prisoners slowly went half blind as they worked in the searing sun.

But, in spite of all of that? It’s still incredibly beautiful. And that’s a hard thing to reconcile.

We headed out to Robben Island on a sunny and windy afternoon, leaving from the station at the Cape Town waterfront. 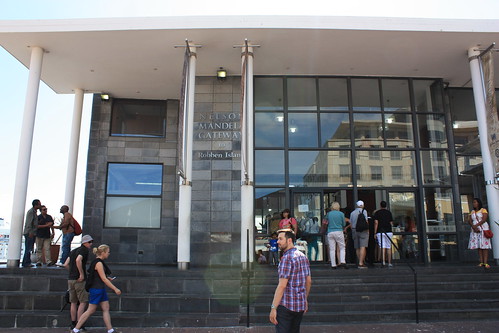 The ferry ride takes a half hour or so, and ours was brutal. The captain was either a novice, a sadist, or possibly unconscious. We sped through the water at a dizzying pace, cutting across huge swells that sent our ship rocking. I tried looking at the horizon (which I’ve heard is a great way to fight motion sickness – wink-wink) but the swells were so big, I couldn’t actually keep the horizon in sight. It kept dipping above and below the window as we rocked. 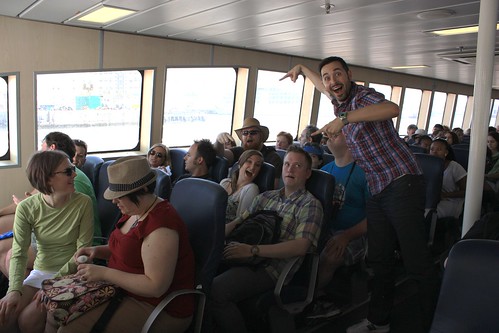 Here we are, fresh faced and happy, at the start of the journey.

And then we arrived. Somewhat green and shaking, but intact. It seems absurd to complain, though, when one is about to tour a former prison.

Robben island is slightly more than 7km from Cape Town (about 4 1/2 miles) and the waters are shark-infested, with rough waves crashing against a rocky shore – so swimming to the mainland would be incredibly difficult. This made the island an ideal place to put people you didn’t want to deal with. 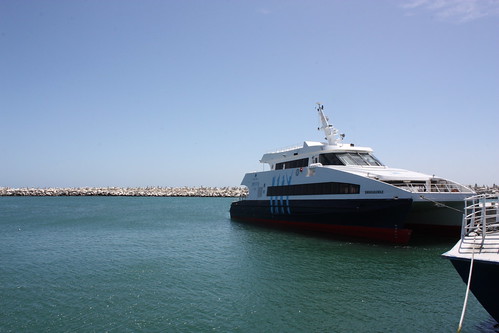 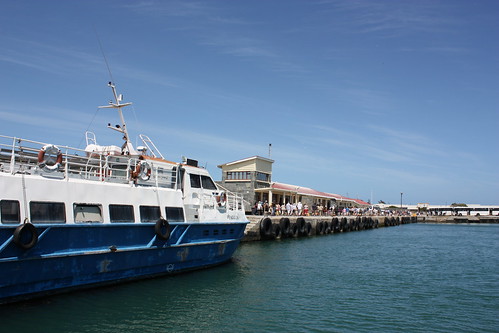 It is named not for any individual, but rather for the Dutch word for “seal”. For centuries, long before Mandela or his political brethren were locked away on the island, it was used as a prison by Dutch settlers, and later it housed a leper colony. 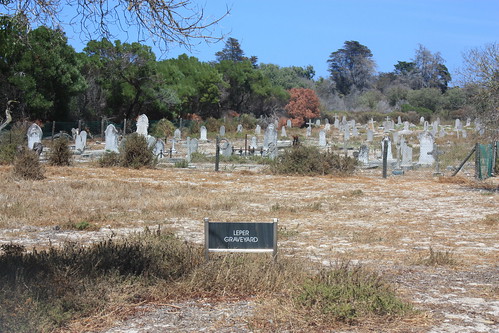 And later still, a leper graveyard.

Starting from the 1960s and up until 1991, thousands of political prisoners were held at Robben Island, many without trial.

The first half of our tour took us around the island by bus, where a thin, handsome-to-the-point-where-I-couldn’t-talk-to-him guide named Thanbo gave us some background on the island and its more famous political prisoners. He alternated between points of seriousness and joking – which was delightful and confusing. When an infant on the tour started to cry, he joked, “It’s okay. We’ve all been there before, even if we don’t remember it.” Then he’d launch straight back into the atrocities of apartheid. 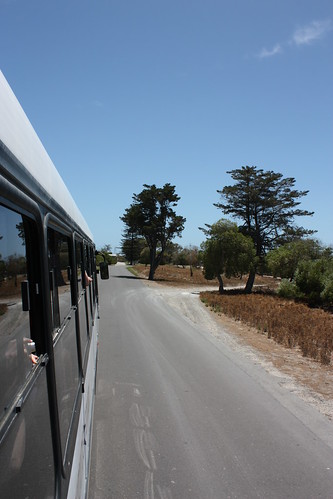 We stopped by this enclosure – a solitary, freestanding cell that sat opposite a long row of cages. We stared, horrified, trying to figure out what they were for. Thanbo explained that the smaller cages housed the many guard dogs that were used on the island. But the small, freestanding cell was where Robert Sobukwe was held in solitary confinement – having no contact with other prisoners – for nearly a decade. 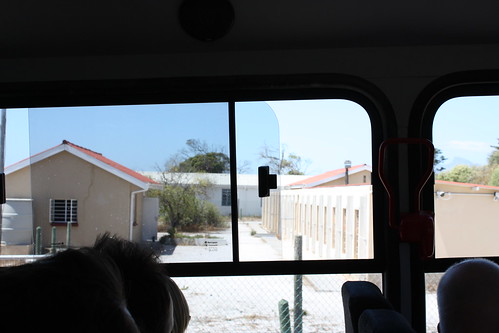 On the left, Sobukwe’s cell, and on the right, the rows and rows of cages where the guard dogs were held. (Apologies for the crappy photo. It was taken from the bus.)

Sobukwe was a political activist and an outspoken opponent of apartheid. He established the Pan Africanist Congress (a South African liberation organization) and was its first president. Sobukwe was charming, educated, and an excellent orator – so naturally authorities saw him as a threat.

During apartheid, non-whites were required to carry passes – essentially identification cards – which dictated where they could and couldn’t go. These passes were kind of like passports – allowing blacks, Asians, and multi-racial individuals into “white” South Africa. The passes limited where someone could and couldn’t go, and you had to have the pass with you at all times.

In 1960, there was a nationwide protest against the Pass Laws, and Sobukwe led a march to a local police station, in defiance of the laws. He willfully showed the officer his pass (which did not give him permission to be in the area he was presently in). He was arrested, and sentenced to three years in prison (normally, the sentence for such an offense was only 6 months).

After he served his sentence, he was sent to Robben Island. He hadn’t been convicted of any further crime, but he was imprisoned on the island through an amendment that allowed police to hold political dissidents without due process for up to three months. When the three months were up, another clause was added – called the Sobukwe Clause – which allowed the Minister of Justice to extend a prisoners’ term annually. Through this perversion of justice, Sobukwe was held at Robben Island for six years. He served almost a decade in prison for supposedly being in an area where he wasn’t allowed.

Can we take a moment to talk about how messed up that is? I mean, hell, when a clause is named after you to KEEP YOU IN PRISON, that’s a pretty serious sign of unjust oppression.

You can read more about Sobukwe here (his story is fascinating and heart-breaking). He died in 1978 from lung cancer. He had a great deal of difficulty receiving medical care, as he was still under house arrest. The government restricted his movements to the point that hospital visits were nearly impossible.

We left Sobukwe’s solitary cell and drove to the limestone quarry. Hard labor wasn’t abolished until the 80s; Mandela and other political prisoners had to work there for hours each day, crushing rocks. This lead to long term health problems (many of them had damaged vision as a result of working in the bright sun, and the dust that was constantly irritating their eyes. It effected their respiratory systems as well). 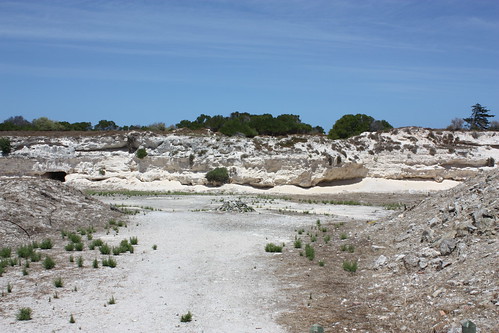 Notice this small pile of rocks that sits in the quarry – Mandela and his fellow political prisoners place a rock there every time they return to Robben Island. It started the first time Mandela returned there. 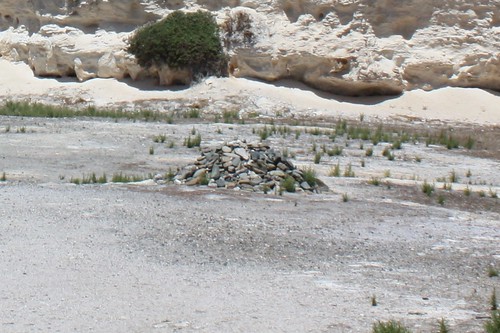 Our bus tour lasted about 45 minutes. We stopped briefly to take in the views of Cape Town from the island. Like I said, it’s beautiful. 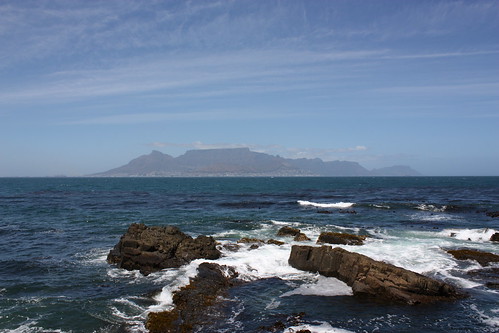 It becomes very easy, for a moment, to forget where you are. You start to think of it as just a sun-drenched island, the sort of place where you bend your knee and snuggle up to your sweetie for a photo. 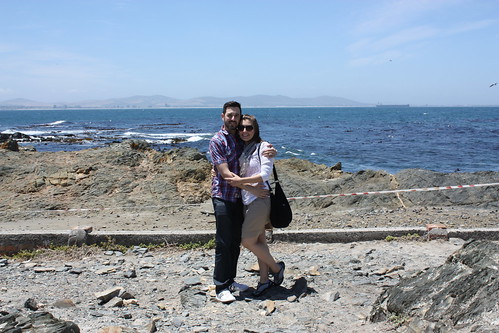 But beauty and goodness aren’t the same thing. We were about to be reminded of that yet again.

After our bus tour, and a brief break, it was time to see the inside of the prison. 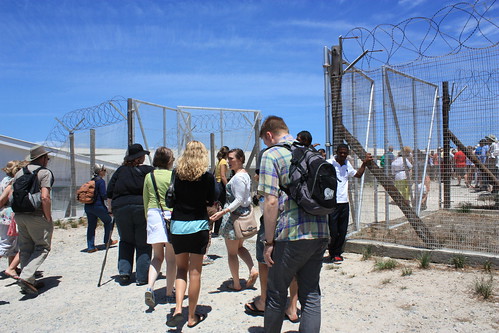 The barbed wire fence is still up around the perimeter. 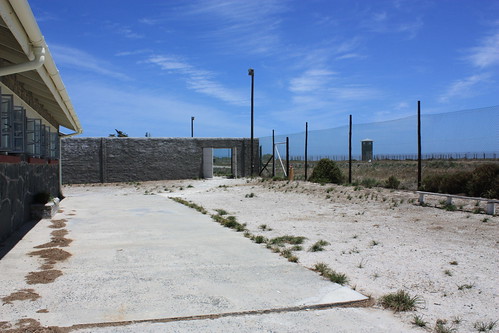 Even on Robben Island, segregation was prevalent. No white prisoners were held on the island. Black prisoners were fed a different diet than their Asian or mixed-race counterparts. It’s all just so … blatant. 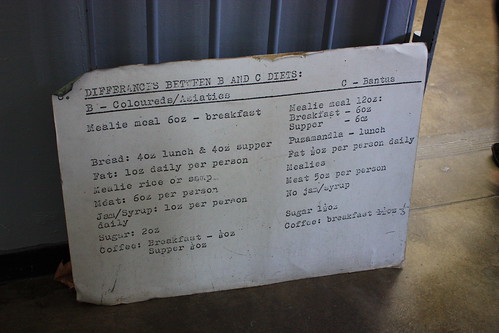 Notice that black prisoners received less quantities of basically everything, and no jam or syrup.

Our prison tour began here, in a large communal cell. 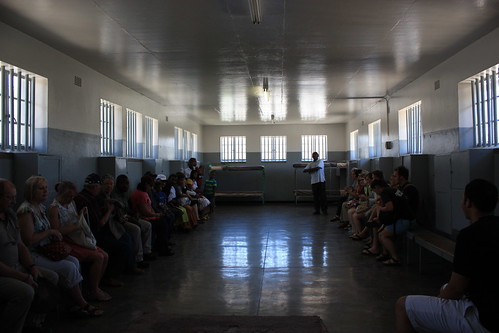 This small, thin mat was resting on the ground. Our guide explained that when Mandela was first sent to Robben Island, this was what he had to sleep on. 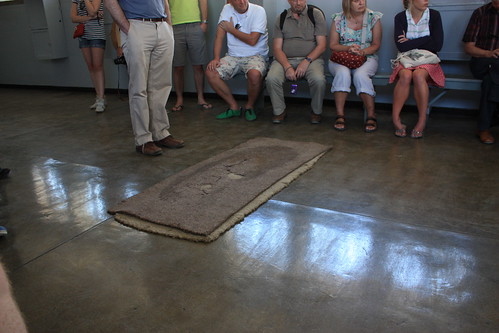 Regrettably, I didn’t catch our guide’s name. He was a former prisoner at Robben Island – as are all the guides for this portion of the tour. Judging by his age, he couldn’t have been more than 20 or so when he was first incarcerated. His crime was that he had been part of an anti-apartheid organization. A undercover government agent had trained with him in Botswana, and later bumped into him – by chance – in South Africa, and turned him in.

It was the sort of miserable luck that made us all cringe. He didn’t, though. I suppose he’d come to terms with it.

By the time our guide had arrived, in 1981, mats like the one above were no longer used, and working in the limestone quarry had been abolished. Things were not great by any means, but they had improved. They now had the support of the Red Cross, and had cots to sleep on. They had access to books (though it was limited, so they would spend hours transcribing important ones so they could read passages whenever they liked), television, and even video games.

Our guide explained that there was a schism between the younger generation of prisoners and the older ones (“Were they our parents, or our colleagues?”). The elders often complained that the young ones were too noisy, spent too much time on silly diversions.

They all agreed on chess, though. The games brought both generations together, but apparently cheating was rampant on both sides (another fact that I love).

It was here, at Robben Island, where Nelson Mandela wrote portions of his book, The Long Road to Freedom. Several attempts were made to smuggle the book out, and it was confiscated a number of times. Fortunately, there were duplicate copies of the book; our guide explained that one was even hidden in this courtyard. 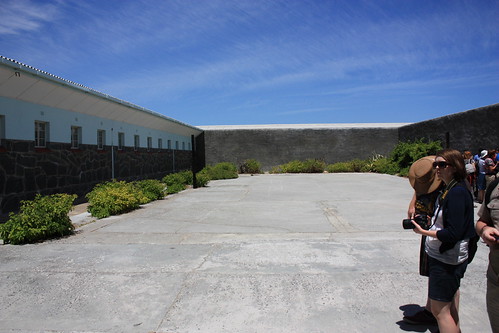 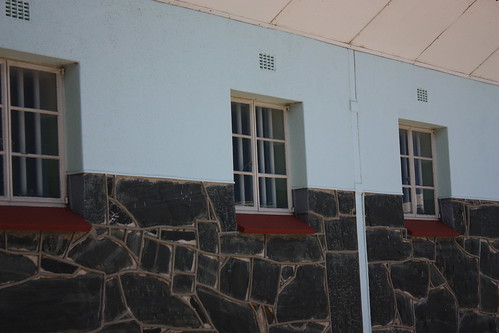 The middle window was Mandela’s.

Mandela’s presence looms large over Robben Island. To an American, at least, he’s the most notable political prisoner to be incarcerated there. His story – and his eventual rise to become the first black president of South Africa – is tragic and inspirational. 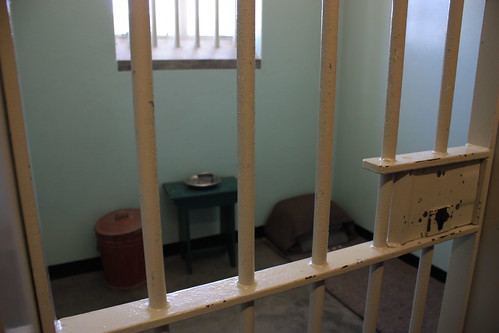 But our visit to the island reminded me that Mandela wasn’t alone in his suffering, or his triumphs. Our guide may have arrived at the island when conditions were far better for inmates, but his tale was still a heartbreaking one. His anecdotes painted a picture of young men trying to still enjoy life within prison walls, under the gaze of their older, hardened counterparts. He told us of the pranks they played on guards, the frustration of trying to get soap to lather while taking a saltwater shower, and the hours upon hours they spent transcribing books.

He put such a personal face on the experience that I felt like I knew him; and still, I couldn’t bring myself to ask his name. I just listened and nodded feebly, and wondered if he was still haunted by this place.

How could he not be? 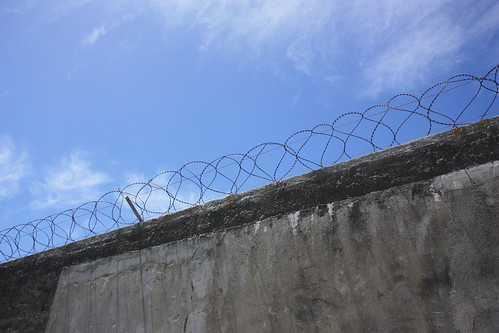 These questions went unasked, unanswered. Our tour concluded, and we walked outside, to a sky so blue, it didn’t quite look real.

We left that beautiful and horrible place, and went back to Cape Town, with its touristy shops and vibrant waterfront. But Robben Island stayed with us long after we left. 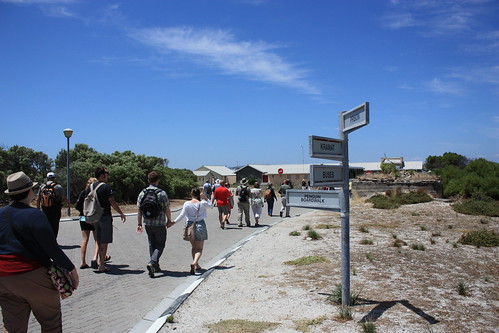 I suspect that’s true for everyone who’s been there.

The Essentials on Robben Island: