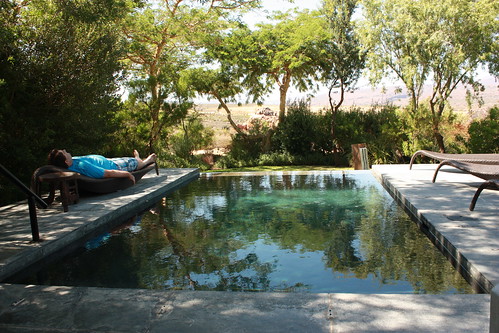 Phil shows us how it’s done.

Remember episode of The Simpsons where Marge decides to take a vacation by herself and ends up at Rancho Relaxo?

Most of you are probably nodding enthusiastically. Others might have vague recollections of it. And a select few might be shaking your heads and saying, “I’ve never really watched The Simpsons.”

That latter group, of course, belongs under glass, so we can inspect and examine them, because they are the modern day equivalent of children being raised by wolves. I mean, we’ve heard rumors of it happening, we suspected it was possible, but … really? Never seen The Simpsons? I … I just can’t right now. It’s too early.

The rest of you, who grew up on the show as I did, probably find yourself quoting it on a near-daily basis.  While my recollection of high school math is virtually non-existent, and I’m hopeless at reciting anything beautiful or poetic (with a few rare exceptions), I find that I can often regurgitate huge portions of Simpsons episodes without hesitation.

This is not something to be proud of, I know. But neither is being able to eat an entire sheet cake in one sitting, and look how I brag about that.

Rancho Relaxo came to mind over and over again at the Kloof. Because even between the morning hikes and the afternoon teas and the evening drives, we still had plenty of free time to while away in whatever manner we pleased.

In the words of the great Troy McClure:

By now, you’ve seen all Rancho Relaxo has to offer… But remember: we can’t tell you how to have a good time. You have to tell us! As I said to Dolores Montenegro in Calling All Quakers: Have it your way, baby!

And goodness, at the Kloof, we did precisely that.

One afternoon, we tried our hands at archery. ARCHERY. Needless to say, I didn’t have the sort of upbringing where archery was an option. Someone wisely realized it was best not to hand us weapons as kids, lest we go completely Lord of the Flies.

I wasn’t terribly good at the whole arrow shooting thing, but the nice thing about archery is that you don’t need to be proficient (or even come close to hitting the target) to look sexy as hell. No wonder Katniss and Legolas got so much tail (my nerd friend would like me to note that Legolas doesn’t actually get any tail in the books, but it’s pretty obvious that he’s supposed to). 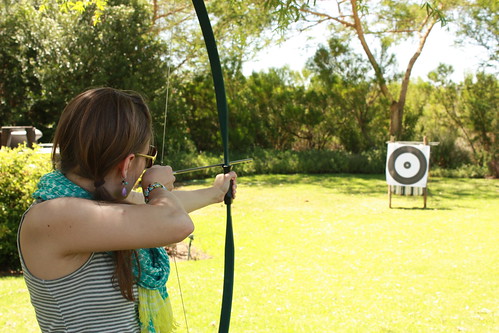 This is a really, REALLY easy way to get laid, folks. Just saying. 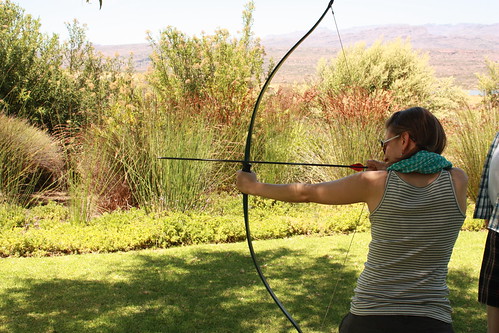 Seriously. I wish I had known about this in college.

Rand gave it a shot (heh). At the beginning, he was rather terrible, but that didn’t detract from the aforementioned sexiness of the whole thing: 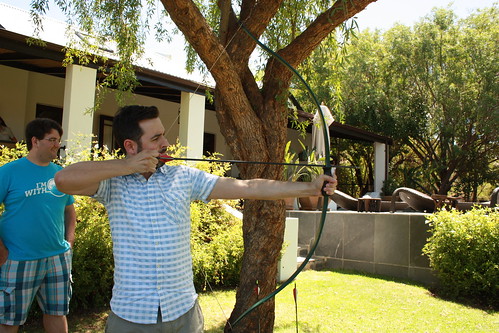 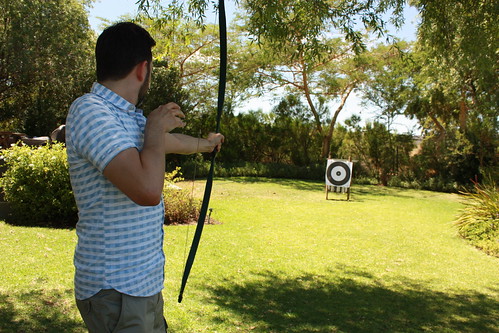 And then he did this: 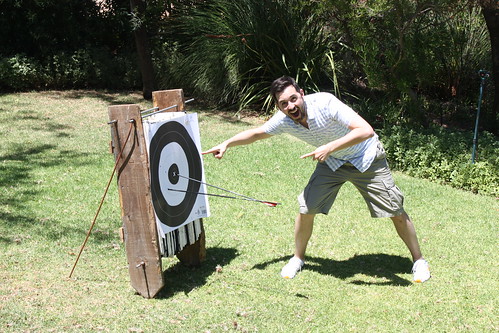 That’s right: THE GOOBER GOT A HOLE-IN-ONE OR WHATEVER.

Some days were spent entirely in the pool or at the spa. I have no photographic evidence of the latter (because I cannot take a camera into a spa, people. Besides, there was nakedness involved and we all know my blog isn’t that interesting), but it was basically the best thing on the entire planet, and I am pleased to say that my otherwise totally manly husband is now obsessed with hot stone massages and steaming open his pores.

Looking back, it’s amazing that we had the freedom that we did, and that no one got hurt or deported.

Phil got to try his hand at the espresso machine: 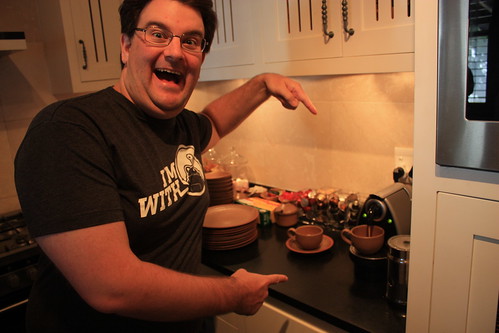 Internet, meet Phil. You guys are going to be great friends. I just KNOW it.

With some pretty darn good results: 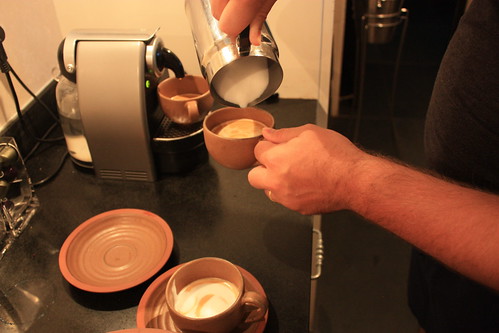 There was hiking, which we could do with a guide, or on our own (wisely, we took a guide, because the only way the path was marked was with these little rock piles that we’d easily have missed). 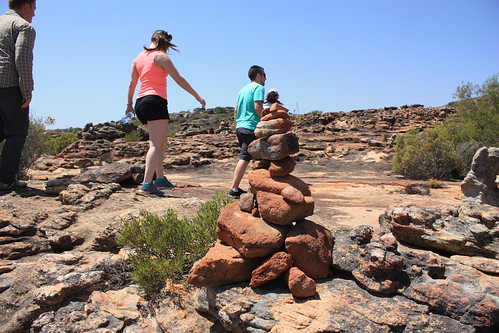 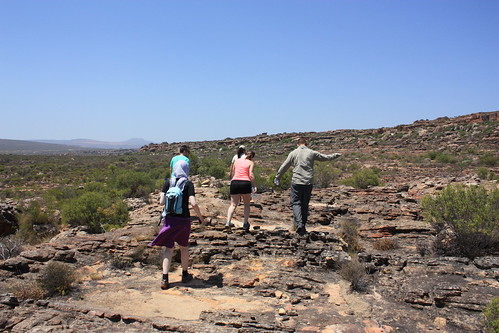 And then there were all the times that Rand decided he wanted to try sneaking up on the animals (I married a nine-year-old. He’s just tall for his age.) 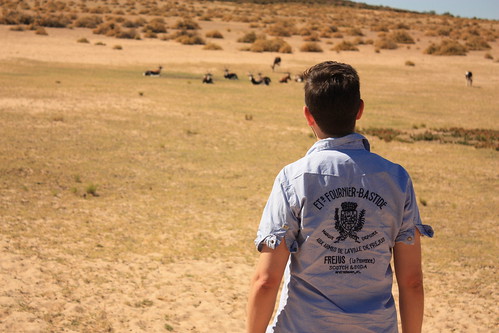 “I’m gonna hug him and squeeze him and love him and name him George.” 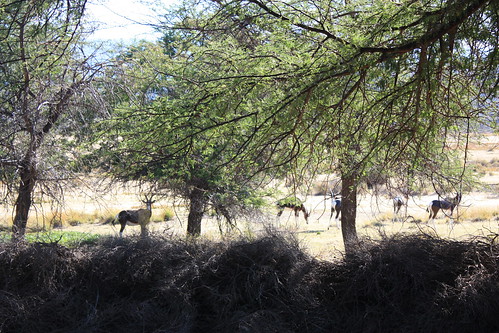 This is a photo he managed to get of some of the bontebok. As you can see, they are well aware of his presence.

And the day that we went canoeing, and poor Justin got stuck with me: 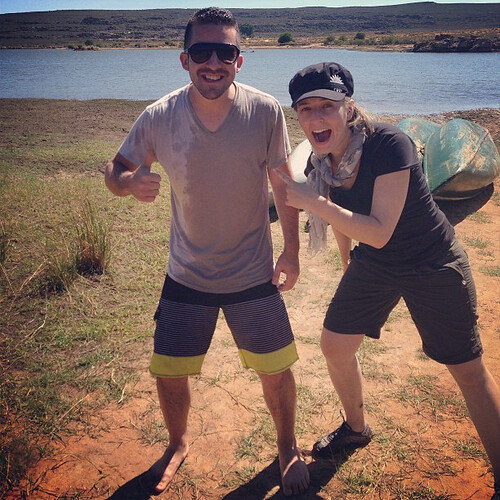 Photo courtesy of Justin, who probably deserves more courtesy than this.

That’s how it went, every single wonderful day at the Kloof. I can’t wait to go back again, this time with a slightly different agenda: I want to sit around and, in the words of my friend Pam, do a little bit more of nothing.

That’s probably the only thing at the Kloof we didn’t try, but I’m sure even that would have been wonderful.