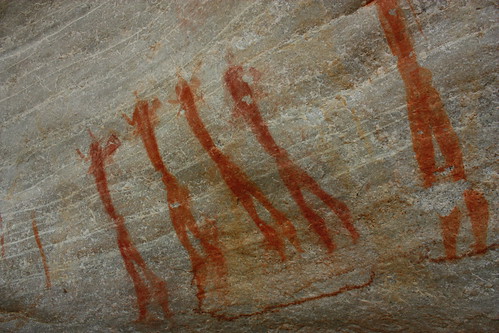 Cave paintings at the Kloof.

I know, I know. It sounds positively inhuman, doesn’t it? I’m fairly sure that in most parts of Europe, it would constitute child abuse (like Spain. Seriously, next time you have to get up early, think WWTS –What Would The Spanish Do? I’m pretty sure that after eating dinner at midnight and going to bed at 2am, they would NOT be getting up at 6).

At the time, though, I didn’t think too much of it. I got up at 6:00am and by 7:10 at the latest, I was out the door (and though this process never seemed that difficult, to this very day I have nightmares about it.)

I did this every single weekday for four years, as well as most Saturdays. I was on the debate team, and weekend tournaments meant that we had to meet at the school at ungodly hours, like 5:00am. I don’t know why I couldn’t just take up binge drinking like all the other kids.

In the years since, whenever circumstances have allowed, I have slept in. Sometimes until an unreasonable hour when most decent folk are contemplating lunch.

So you’d imagine that, while vacationing in Bushman’s Kloof, I could have very easily whiled away several days in bed, getting up only for high tea. Instead, we often found ourselves out and about by 7am. 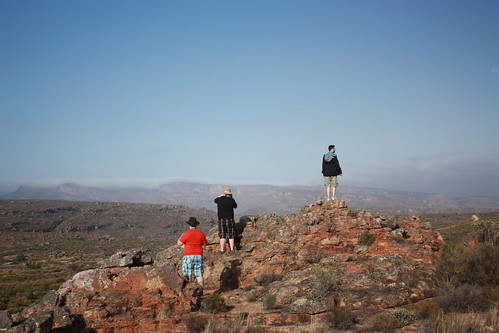 I know. I know. It sounds positively barbaric. But the thing about the Kloof was this: it was easy to get out of bed so early. There was so much to see.

Plus, we were wickedly jetlagged, so while the clock might have said 6:30am, our brains thought it was 2pm the following Tuesday (or something. I’ve never been good at time zones).

The sun was up and blazing by the time we got out of our rooms, but the earth wasn’t quite scorching yet. There was still a faint crispness in the air, a tiny bit of dew still clinging to the grass as a result of the overnight watering.

We had a few hours of perfect hiking and exploring weather ahead of us. 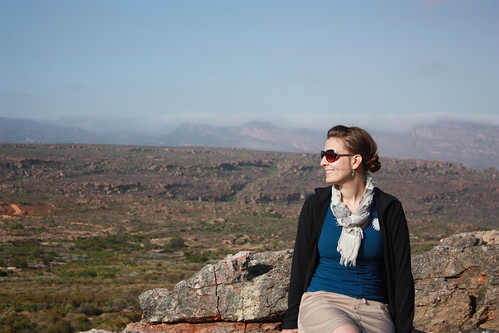 Not only did I get up early, but here I am smiling and wearing a skirt. I don’t even know who I am anymore.

By now, several you are probably declaring that I have lost it. Not only did I get up freakishly early OF MY OWN FREE WILL, but I went hiking, to boot. Before you give up on me entirely, screaming “YOU’VE CHANGED”, let me explain:

There were cave paintings. And snacks. 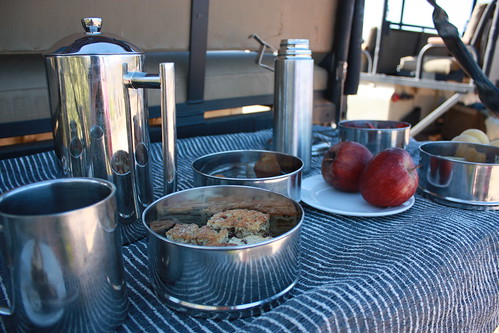 Served out of the back of a Jeep, no less.

Seriously – a little archaeology, plus biscuits and a warm cup of rooibos every single morning? I could do that, you guys. Throw in Indiana Jones, and I will promptly start drooling and forget what I was talking about. 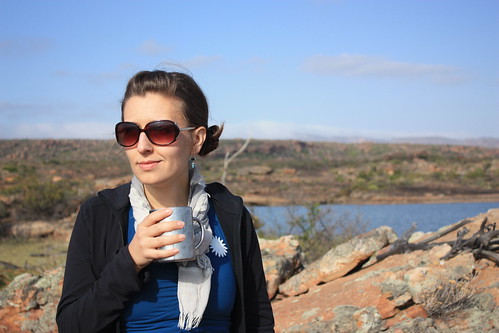 “Maybe I should tell Rand to get a leather jacket … and a whip.”

Wait. What was I talking about?

There are more than 100 of them at the Kloof, some are estimated to be 10,000 years old (since there is no organic matter on the drawings, it is impossible to do carbon dating and determine an exact date). They had an expert spend several years at the Kloof, exploring and cataloging the paintings. He noted that there are likely many more in the area that he missed.

I positively LOVE that notion: that while visiting the Kloof, you might discover a new cave painting.

Though I imagine that would be a difficult task. The paintings are, to the untrained eye, hard to see. Over the years, much of the color has washed away, often leaving only faint red marking which are hard to distinguish from the natural pigment of the rocks or the stains of hyrax urine. 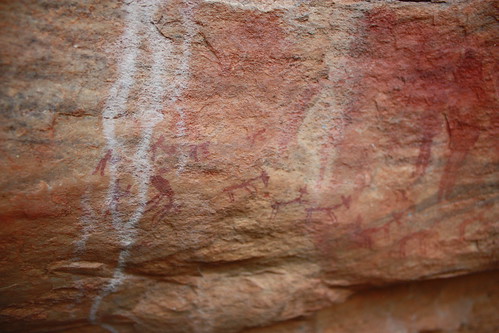 Which, by the way, was everywhere. We’d excitedly point to something and our ever-patient guides, Simone and Roman, would quietly shake their heads and inform us that no, that wasn’t a relic of an ancient culture. It was merely the runoff from a communal rodent bathroom. 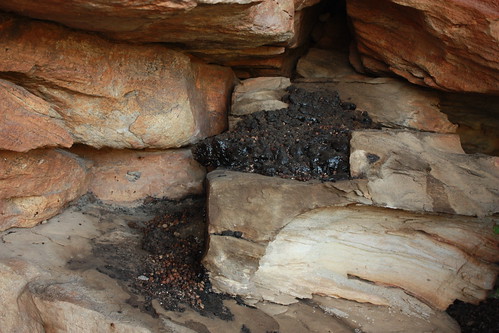 In the interest of being honest, I’ll tell you this, too: I might refer to them as morning hikes, but they were really more like “morning gentle walks.” Some “hikes” required us to trek over 100 feet of relatively smooth terrain. But they happened before 9am, so they ARE HIKES.

I should make it clear that none of this was foisted upon us. At the Kloof, it’s entirely up to you how you spend your time: if you tell your guides that you don’t want to do anything before noon, so be it. And if you tell them that you wish to totally rock your quads while traipsing over uneven rocks, they will make that happen.

Be warned, though: they are younger and more attractive and in better shape than you are. They made it look easy. On one morning, Roman cut across rocky terrain in a few quick steps, and we all stared blankly, as he bid us to follow. 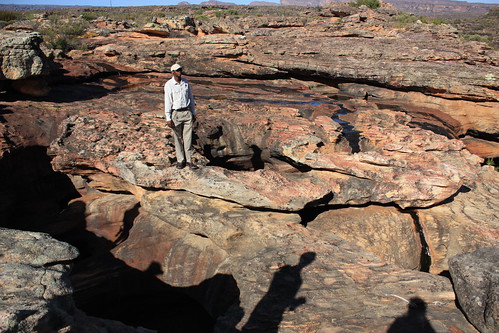 “Just think with your feet!” he said, as though it were the simplest task in the world. 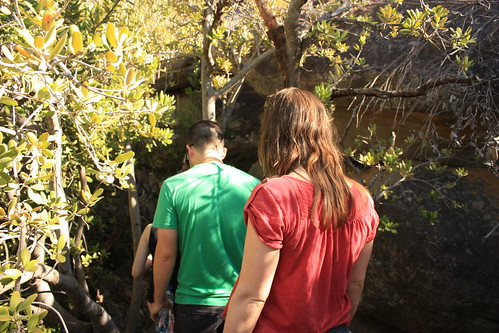 For those of you for whom foot thinking is an impossibility, fear not: the most amazing paintings at the Kloof aren’t necessarily the least accessible ones. On one occasion, we barely walked more than 20 feet or so, and saw one of my favorites. It was a small buffalo drawing, and it was incredibly well-preserved. 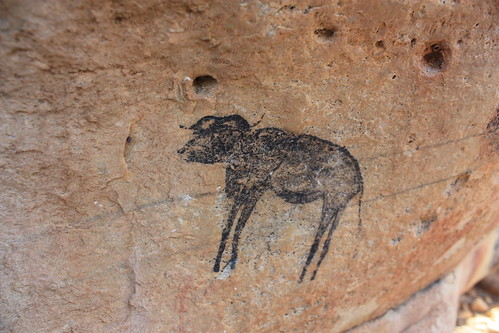 An image like this one, so clear and dark, is very rare. It likely wasn’t black to begin with; the dark hue is probably the result of a lichen that grew directly where the paint was. Kind of like a fossilized cave painting.

Naturally, I regarded it with the reverence it deserved: 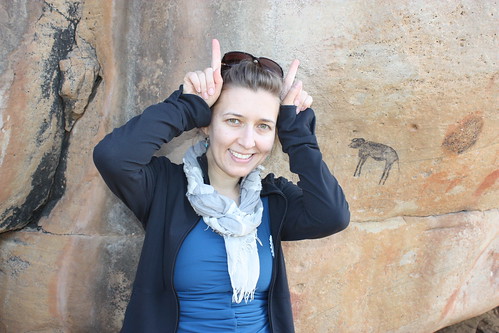 “You are why we can’t have nice things.” – everyone I’ve ever met, ever.

This was another one that I absolutely adored. See the natural striations in the rock? This painting follows those same lines … 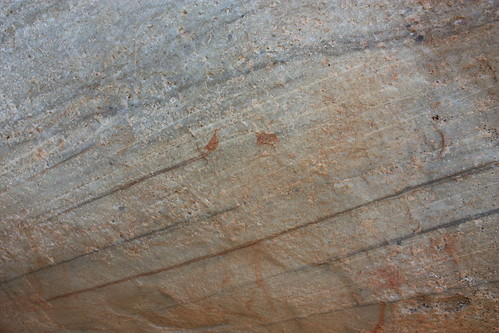 And at the end is perched a little bird. 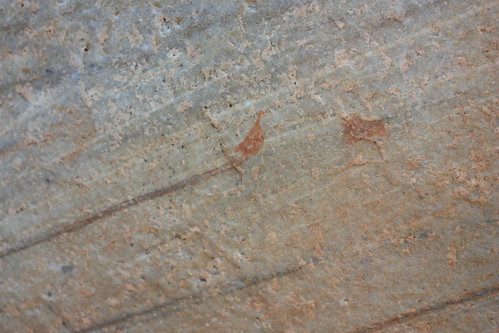 Our guides explained that the paintings were once quite detailed, using a variety of colors. They were painted with ocher and other minerals that had been mixed with animal fat or blood. Today, only traces of the original creations remain – light stains of the minerals left on the rock. 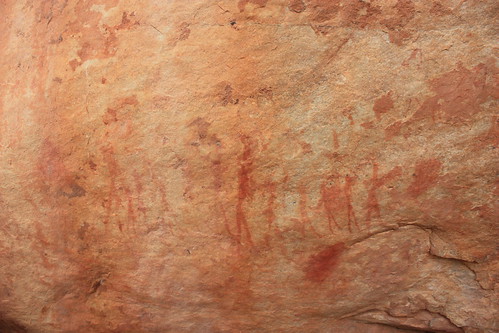 These figures once had heads, clothing, and jewelry, but centuries of rain and erosion have left them naked and decapitated. 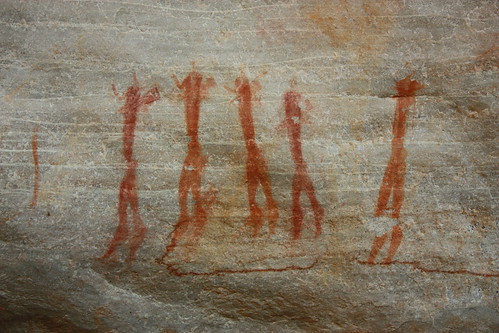 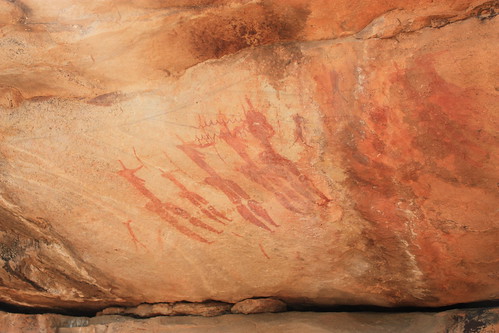 This was a group of female figures. You can tell by their butts which, as you see here, would not quit.

The images painted on the rocks are often not documentary. There are numerous depictions of hunting scenes, but wild game only accounted for about 30% of the Bushmen diet (much of it was seeds and plants). Others show animals being hunted that (according to fossil evidence) never lived in this part of the world. 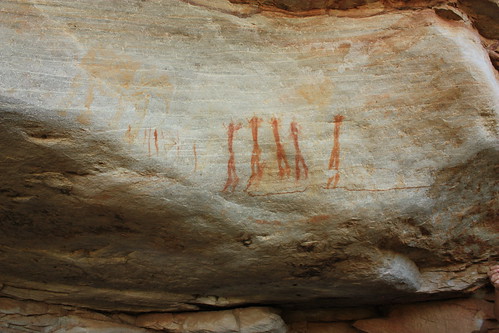 Look carefully, and you can still see traces of the yellow elephants to the left of, and  in the background of, the small red hunters.

And then there’s the occasional drawing of an entirely fictionalized creature being hunted. Something that’s a cross between a rhino and an elk. A reminder to not believe everything you see painted on the side of rocks, or you’ll start thinking that unicorn hunting was big in South Africa several thousand years ago. 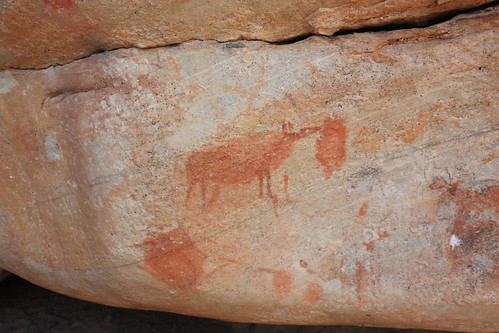 See this creature? IT IS NOT A THING.

Every morning, we’d listen intently to stories about the indigenous tribes that lived here, and scrutinize their ancient creations. 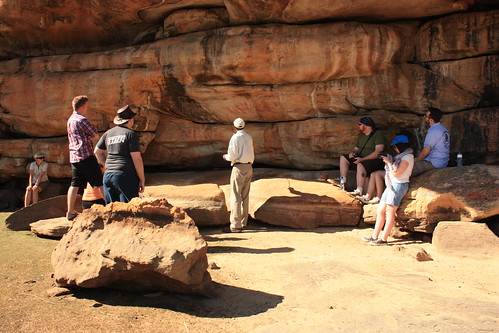 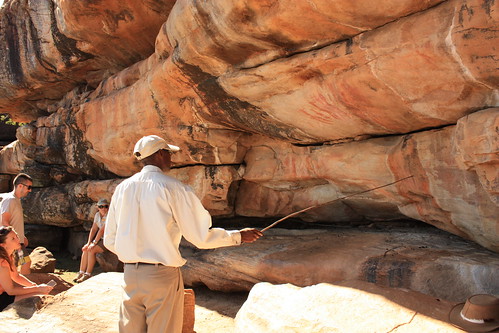 And then we’d return back to the lodge, where breakfast was waiting for us: 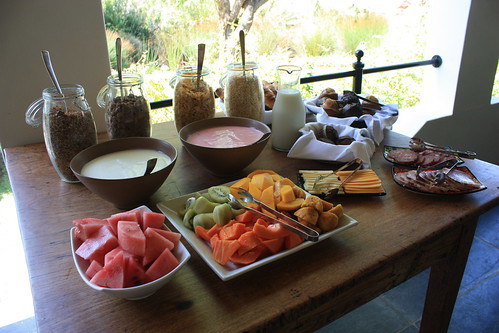 Every morning we’d have this, along with eggs, veggies, and bacon, cooked to order.

Between mouthfuls, we’d talk about what we’d seen, flip through one another’s photos on our cameras, and try to make sense of it all. It was humbling; these paintings had that has existed long before us, and will survive long after. And yet, despite this seeming permanence, they too, will eventually fade into nothing.

Seeing those paintings firsthand, wondering about who had created them, and about all the eyes that had gazed on the images over the centuries. was a profound and powerful experience. It was enough to get us out of bed at 7 in the morning.

Well, that and biscuits. 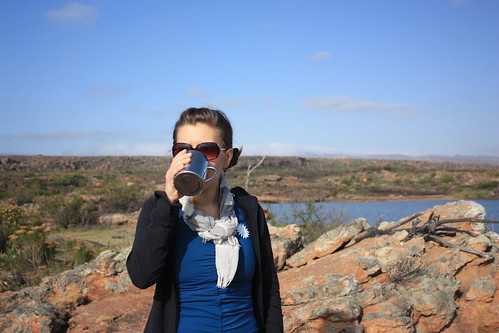 And a nice cup of rooibos tea.