I have a confession of sorts. It might be that last week, Rand and I zipped back to Europe, and went to Dublin for the second time in six months, and then to London for the umpteenth time since I started this blog. 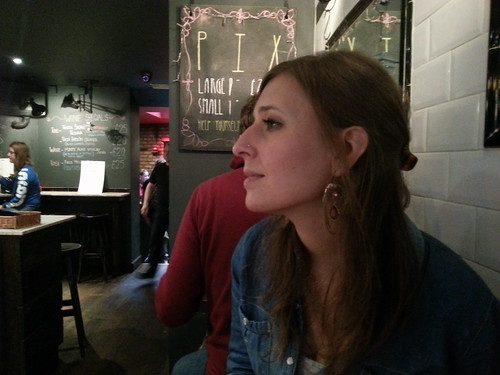 Sitting in a tapas bar in London, I ruminate on whether or not there is pee on my coat.

I know some of you are reading that and thinking, “Girl, no. I cannot spend another three weeks reading about the ins and outs of Anglo-Irish conflicts,” and to those dear folks I say, fear not. The thing is, this trip kind of sneaked up on me, and I didn’t really make any plans or do anything while I was there that is worthy of a blog post. I mostly just shopped, and ate sticky toffee pudding, and had more than my fair share of travel freak-outs. Including a particularly teary and noisy one that happened after I sat in what may or may not have been a puddle of urine in a Dublin cab.

I will tell you about that, of course. As well as our hotel in London, which I kind of thought was going to trap us in its winding and nonsensical hallways forever. But these aren’t necessarily things activities which I think you should repeat; quite the opposite, actually. If you visit London or Dublin, you should probably try to avoid the same pitfalls that I did, and do things besides shopping and eating desserts and sitting in what-I-really-hope-wasn’t-pee and getting yelled at by crazy women in fur coats (an unrelated but really fun story).

But first, I need to get through telling you about South Africa. And I may need to pop back (metaphorically, at least) to Milwaukee and finish telling you about my visit there, and crap, I just realized that I completely skipped telling you about Portsmouth, New Hampshire, didn’t I? It seems that my travel plans move faster than I can blog, which is bound to be a problem because next week Rand and I are off to Australia, where we will spend several long days in the Whitsundays.

Needless to say, this is an awesome problem to have.

So I need to get my head down and start blogging, immediately. I will hopefully be covering a lot of ground. Some of it will be useful. Some of it will not. And this story I’m about to tell you falls into that latter category, but that doesn’t mean it isn’t worth telling. It’s about one of the loveliest flight attendants I’ve encountered, possibly ever. Hearing it probably won’t help you decide where to stay on your next trip to London, or where to eat in Dublin, or anything like that. But it might renew your faith in the human race. It certainly did for me.

I really wish I had gotten her name, so I could tell the good folks at British Airways about her. Instead, she’s now a part of travel folklore. The kindest flight attendant, ever. It sounds made up, but I swear, she’s real.

She was fortyish, with close-cropped blond hair, and looked a wee bit like Emma Bunton (“Baby Spice” to us Americans). Her demeanor was sweet without being treacly, familiar and warm without being overbearing. I spotted her before my flight, chatting to some young parents who were flying with their baby (who looked to be barely a year old, if that) for the first time.

Later, I watched her walk up and down the aisle with the little one in her arms, giving his parents a bit of reprieve. She gently rocked him, and the expression on his face, pressed into her shoulder, was one of pure contentment.

“Isn’t he gorgeous?” she whispered to me. I nodded.

She walked through our cabin, smiling, checking on folks here and there, adjusting a blanket or whispering inquiries as to whether or not they were okay. Later, I walked to the central galley where she and her colleagues were gathered.

“You must look out the window,” she said, gesturing to the small porthole in the emergency exit door. I peered out. “Isn’t the terrain interesting?” she asked. “It’s so different.”

“Mmm-hmm,” I said, absentmindedly, wondering how someone could fly so much, and still find so much joy and newness in the act. The message wasn’t lost on me.

She asked me if I needed anything, and I shook my head, too embarrassed to ask her about herself, or even for a glass of water.

At the end of our flight, she wore the same bright smile she had at the beginning, as she squeezed past the passengers pulling bags from the overhead compartments. She was heading back to the young parents and the baby, to see if they needed any help. The little one was crying.

“Oh, I know,” she said sympathetically. “You want to stay here and sleep, but it’s time to go!”

I asked Rand what he thought of her, and he told me that he loved how she much she loved.

Perhaps we’re being presumptuous in thinking that, but I really can’t come up with a better way of describing it; her actions were filled with love. She loved her work. She loved to fly. She loved the people around her: the little baby, the parents, and perhaps even the pedantic grey haired gentleman who stood up too early when the plane landed.

She loved. And can I tell you something? It was contagious as hell.