Skip to content
Posted in: Food, Nothing to Do With Travel, WTF, WTF Wednesdays 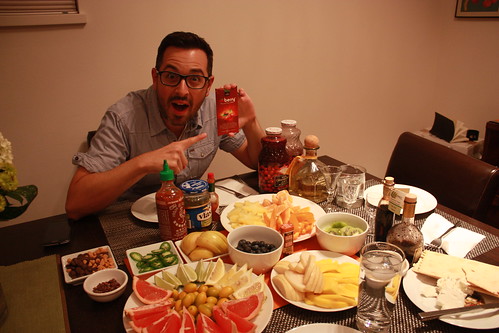 Rand, just prior to our miracle berry dinner.

The other day, I was lamenting to myself (and by extension, to my long-suffering husband) about the death of wonderment in my adult years. How there were now so many known variables in our lives, so many answered questions. There were very few decisions to make. Very little was new.

“I just remember high school, and thinking I had all these opportunities in front of me, and all these choices to make. And now those choices have been made. And I’m not upset how life turned out, you know? I’m happy with the decisions I’ve made. I’m just sad that I don’t have all of that in front of me anymore.”

Rand politely disagreed with me.

“That’s bullshit,” he said. “We’re still young. We could go back to school. Or move to another town. Not everything has been decided yet.”

And I nodded. Logically, I understood that he was right. But I still felt saddened by all of it. I missed how new and exciting everything felt the decade before.

In all fairness, the name is an overstatement. The miracle berry never given sight to the blind, or cured anyone’s leprosy, or filmed a decent movie that starred John Travolta and/or Nicolas Cage.

But it reminded me that not everything in my life has been decided, which, given my stubbornness and negativity, is nothing short of miraculous. That even at the ripe old age of cough-cough, there are things left to discover. Even the stuff that you’ve done a hundred times before can seem different and fun.

Good heavens. I sound just like someone who’s had sex while high on ecstasy, don’t I? Which, for the record, I have never done, unless by “ecstasy” you mean “red velvet cake”. (And then I’d need an intervention.)

Before I go further, I should explain. But, man, the chemical process behind the whole thing is kind of complicated, you know? And chemistry, besides the natural one that I am absolutely positive would occur should I ever meet Jeff Goldblum on a rainy night, is not really my strong suit.

Simply, the miracle berries (which are entirely natural, and native to West Africa) contain “a rogue glycoprotein that tricks the tongue’s taste-bud receptors into believing a sour food is actually sweet.” The protein binds to your tongue, and is slowly washed away by your saliva over the course of about an hour.

And so you have a brief window when your sense of taste goes a little crazy. As do many of your other senses, because they can’t really reconcile what’s going on.

The berries are entirely legal, safe, and natural, but difficult to find. The FDA listed the berry as a “food additive” in the 1970s, effectively quashing the market for it (some claim that this was due to pressure from the sugar industry, who didn’t like the idea of a little berry making them obsolete). But in the recent years, the berry’s popularity has grown, achieving a weird kind of cult status among foodies. Flavor-tripping parties, where people eat the berries, and proceed to down a smorgasbord of usually-unpalatable treats (Tabasco, unripened fruits, pickles), are becoming all the rage.

We were given a pack of ten berry pills (just as effective as the berry itself, I’m told, but with a longer shelf life) as a Christmas present from our friend Nicci, who works with Rand, along with her recommendation: “Try them with citrus.”

They sat in our pantry for a few months, waiting for a special occasion. 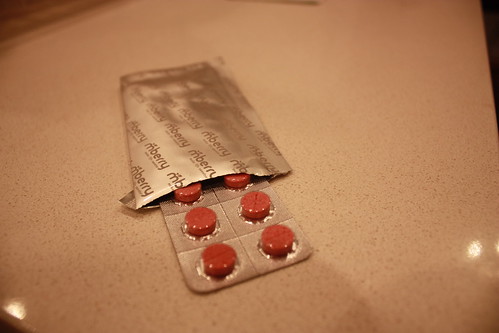 When our friend Lauren popped up to visit us from San Francisco, and was game on trying the berries, we decided that was more than reason enough.

And then we had the weirdest dinner, possibly ever. 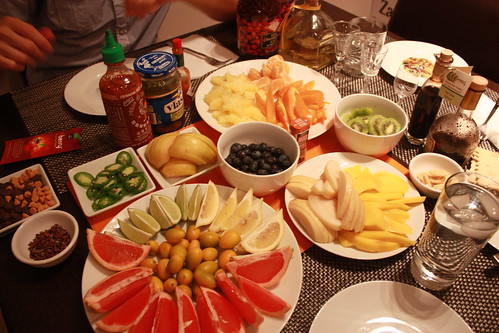 The tablets themselves are pretty innocuous. They taste a little like the chewable aspirin I remember taking as a kid, or like the chalky roll candy we’d get during Halloween (the one we’d eat only after we’d consumed everything good, but still needed a sugar fix). We let them dissolve on our tongues, which took a little while, but led to some delightful photo opportunities: 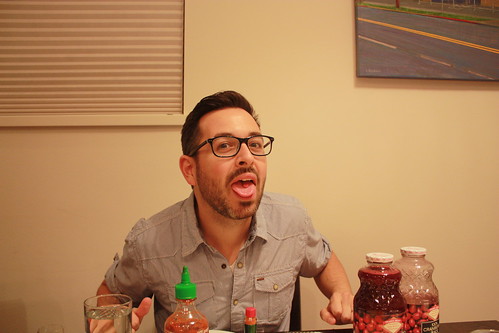 My beloved being … well, being my beloved. 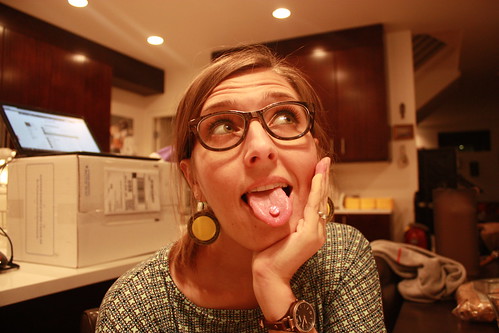 Yes, that’s a Zappos box behind me. Don’t you judge me. 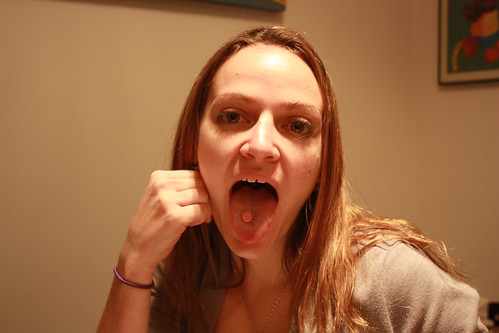 Lauren is probably going to strangle me for posting this, but I think she looks adorable.

Rand’s pill dissolved first, and he went straight for the limes. His reaction was thoroughly enjoyable. 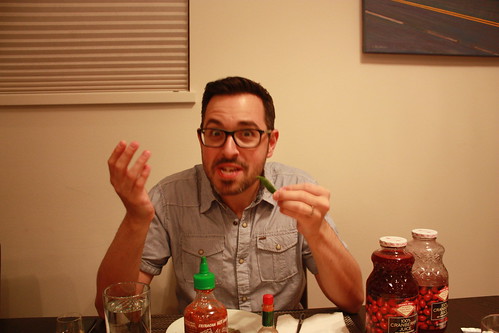 Lauren and I figured he was putting us on until we tried it ourselves. And then … wowzers.

The limes and lemons tasted, as Nicci had said they would, like sunshine. They had a rich, honeyed sweetness and a hint of tartness at the end – better than the best orange I’d ever had. Ditto with the kumquats. 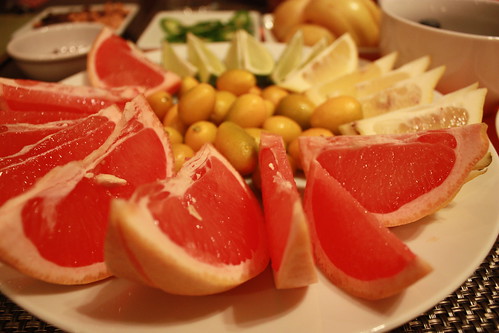 Oh, lordy, and the mangoes. They were velvetly and sweet, like creme brulee. The usually-tart apples tasted like sugary, overripe pears. Goat’s cheese became cream cheese frosting. And the spiciness of a jalapeno was gone; it was now as a mild as a bell pepper. We ate slice after slice, impervious to any heat (Note: the next day, our tongues were positively raw, and our stomachs were a little bit on the delicate side. But that night, we were invincible).

I slurped up a spoonful of balsamic vinegar, and it was reminiscent of blueberry syrup, with a slight metallic aftertaste. My unsweetened cranberry juice, usually undrinkable on its own, tasted like the sugar-laden Ocean Spray variety.

But the limes remained my favorite. 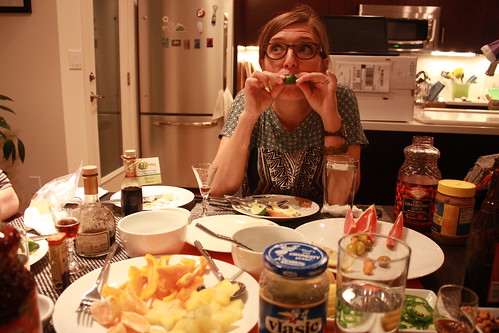 It got a little frenzied. My understanding is that this is not uncommon at flavor-tripping parties. We frantically tried everything, dismissing some things as awful (ginger, starfruit), other things as relatively unchanged (sunflower seed butter, chocolate), and others as slightly blander (the flakes of sea salt that we let dissolve on our tongues tasted a bit like that fake salt that my grandmother used for a brief time in the 80s.) 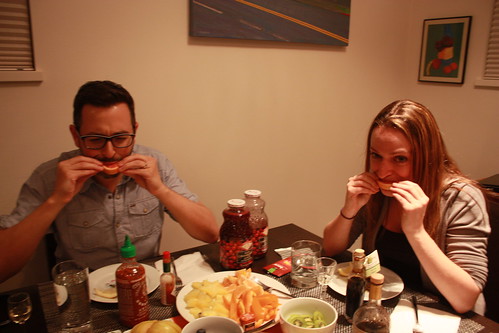 We each ended up taking two pills each. The effect lasted about an hour for Rand and Lauren, and about 40 minutes for me, before it started to wear off. Afterwards, I scanned the mess of the dinner table, the plates now empty of fruit, the copious lemon and lime rinds that were everywhere.

Just as I was lamenting the fact that there were no more unknowns in my life, something came along and made the familiar unfamiliar. The old became new. I felt young and alive and- 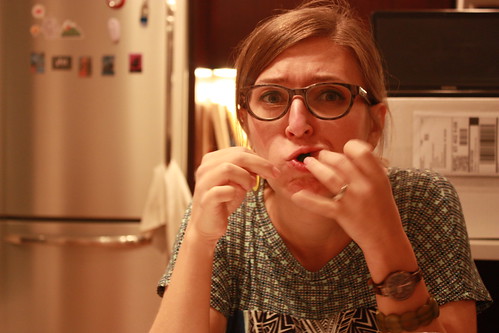 Um … well, anyway … it was nothing short of a miracle.