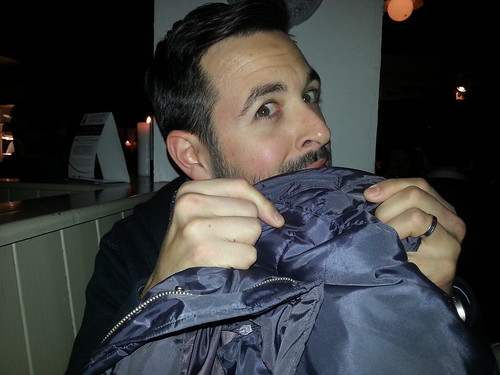 Rand, sniffing my coat. Though to be fair, it kinda looks like he’s licking it. Which is gross.

I had hoped that I would be able to get my post about our visit to the townships of Cape Town up before we left for Australia, but that didn’t pan out. I was rushed for time, and found that I just couldn’t give the tour the attention that it deserved. Rather than draft a post that didn’t do the experience justice, I figured I’d wait until I got home.

Also, between researching the history of Apartheid in South Africa, and Wednesday’s post about the epidemic of rape that’s currently plaguing the country, I needed to switch gears. To talk about something lighthearted, if only for a little bit.

So I want to tell you about how I freaked out and was convinced that I sat in pee last week in a Dublin cab.

Which means, of course, that I was in Ireland last week. And that our travel schedule is now officially reaching crazy-pants territory (no, I’m not complaining. Shut up, I’m totally not).

So last week (at least, last week at the time I wrote this), we were in Dublin for a day, and London for four or five.

Rand had recently finished this book by one of his investors, Brad, and Brad’s wife Amy (you may remember them as the folks who decorate their guest bed whenever we come visit). It talks about what it’s like to be in a relationship with someone who is running their own startup – the difficulties that emerge from it, the conflicts, and ultimately, how to make it work. Rand even wrote a small contribution for it that appears in an earlier chapter.

Brad and Amy note that during every international trip, each person in the relationship is allowed one major and one minor meltdown (or, if major meltdowns are not your thing, two minor meltdowns can replace it). In Dublin, I used up one of my meltdowns. I labeled it as a major, but Rand claimed it was minor, because he’s a mensch like that.

Either way, it was ridiculous.

Dublin and London were scheduled to be cold, so I lugged my parka with me on the trip. It isn’t the prettiest of coats, but it fits over my hips (nothing short of miraculous, if you’ve seen my waist-to-hip ratio, which is evidence that God isn’t subtle. Also, he has a weird sense of humor), and it has a hood, and it’s grey, which I find to be a good neutral and excellent camouflage if you want to blend into a Pacific Northwest sky.

While he is usually swamped, Rand actually had a bit of free time on this trip, so we walked around downtown Dublin together. We popped into a few museums, grabbed lunch, dipped our heads into some shops, and then decided to take a cab back to our hotel on the other side of town.

That’s when things went awry. I realize the infinite number of events that had to happen for us to catch the cab that we did. An extra minute spent at this museum, a bit more time lost to the bathroom. Had we skipped the gift shop, or spent more time in it, or decided to get dessert (let this be a lesson to you: always get dessert) – any of these things would have led to a different cab. But no. We got into the cab that we got into.

I maintain that it was a toilet on wheels.

I did not notice any of the signs: the cabbie’s windows were open even though the day was cold, and there were an unreasonable number of air fresheners hanging from the rearview mirror.

But I’m not in the habit of (prior to climbing in a cab) checking to see if the seat is wet or anything like that. I just assume that’s dry and relatively clean AND NOT SOAKED IN AN UNIDENTIFIED SUBSTANCE. So I climbed in (still wearing my parka) and sat, thinking about how lovely the day had been, even though it was ridiculously chilly. And goodness, did it get even chillier now that I was sitting in the cab? Yes, it certainly seemed to. The cold felt like it was seeping through my clothes and into my bones.

We arrived at our hotel, and Rand generously tipped the cabbie, because we’ve decided that if Americans are going to be known for something in Europe, damn it, it’s going to be that we’re good tippers.

We walked through the hotel lobby to the elevators. That’s when I noticed something was wrong.

The cold that I had felt in the cab hadn’t dissipated. I felt downright damp and chilly. I pulled up the hem of my parka, and felt my jeans. The back pockets were wet.

“Babe,” I said, unable to quite wrap my head around what was going on, “I think my jeans are wet.”

I tore off my coat, and began examining the back of it. Sure enough, there were darker streaks where the fabric had been saturated.

Now, a reasonable person might, when faced with a situation like this, look at all the evidence in front of them and draw a conclusion. For example, if it’s pissing rain out, and you later sit in something wet in a cab, you could safely assume that it was rainwater. Or if there was an empty Sprite can on the floor of the car, you’d conclude that it was soda on the seat.

But I’m not a reasonable person. NO. I’m a germaphobe. That means that my thought process was something like this: 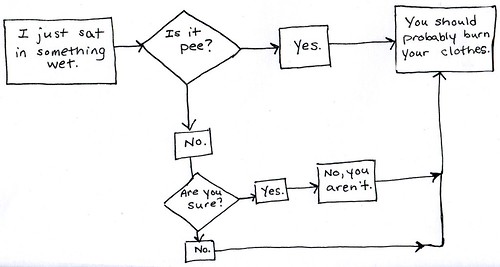 Also, if I step in anything, ever, it’s poop. It’s always poop.

I immediately started to panic.

“I just sat in pee,” I said, starting to shake.

“You did not sit in pee,” Rand said, already knowing that trying to reason with me at this point was futile.

“I did. I just sat in pee and the cabbie didn’t tell us and we fucking tipped him for it.”

“I need to change my clothes. And I need to burn this coat. Shit. I didn’t bring another coat. I’m just going to have to freeze for the rest of the trip.”

“Honey, please, please don’t be crazy about this, okay?”

“It’s Dublin. The entire town is damp. Someone got caught in the rain, or spilled something.”

This answer, obviously, did not suffice. The day was sunny. There was no rain, except for the golden showers that I now imagined had saturated my coat. When we got to our room, I stewed and steamed for a while. Rand acted like he was locked in with a caged tiger. He eyed me warily, and every time I made a movement, he jumped out of the way.

“Why are you doing that?” I asked. I was now both crazed and tearful. Whatever answer he gave, it would be wrong.

“Um, I’m really freaked out about upsetting you more right now,” he replied. This, of course, was the wrong answer.

“You think I’m overreacting,” I snapped.

I marched over to the bathroom and slammed the door.

“You know,” Rand said, his voicing finally betraying a bit of impatience, “I wasn’t the one who peed on your coat.”

“I DON’T KNOW THAT FOR SURE,” I yelled back. And even before the last word had left my mouth, I started giggling. And I could hear him laughing just outside the bathroom.

I waited a beat, opened the door, and he was standing there. I rammed my face against his chest.

“Dime sowwy,” I breathed, my voice muffled by his shirt.

“It’s okay,” he said. And then he told me about Brad and Amy’s meltdown rule. Everything that had happened was allowable, and forgivable.

And once more, I laughed.

As for the coat, it’s now sitting in a bag at the bottom of my closet back home. After I had numerous parties sniff it (all of whom maintained that it did not smell like pee and that it was, in fact, probably water or some other innocuous clear liquid), I decided to quarantine it until I could clean it.

Or burn it. Whatever.