Note: all of the links below are safe for work, but they deal with some pretty serious issues. I read through a lot of the articles and can tell you, it fucked with my head mightily. That doesn’t mean you shouldn’t read them. If anything, you probably should. I just wanted to properly prepare you for what lies ahead: it is not funny. It is not lighthearted. It will not make you feel warm or fuzzy inside. But it’s a discussion we should nevertheless be having. 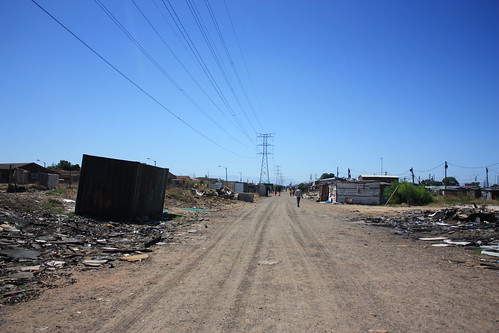 A road in one of the townships outside Cape Town, where rape is an epidemic.

I loved South Africa. I really did. I had a lovely time there, and I sincerely want to go back to both Cape Town and Bushman’s Kloof. I’d like to see more of the country, and, if possible, more of the continent of Africa as a whole.

But I feel like I’d be doing everyone a disservice if I didn’t discuss the issue of rape in South Africa.

In recent weeks, rape has come up a lot in news, particularly in the U.S. The recent conviction of two high school athletes who raped a young woman who was passed-out drunk (while texting, tweeting, and filming their crime) has led to a lot of discussion about how much we tolerate rape as as society. How much we overlook, how much we underreport, how much we blame victims.

Recently, CNN’s Poppy Harlow came under fire for seeming too sympathetic in her discussion of the high school rapists – reporting that their lives were ruined after the conviction. People are demanding that Harlow apologize. Kelly McBride of the Poytner Insistute recently came under fire herself for saying that railing on CNN and Harlow is a waste of time.

I have a lot of feelings about all of these issues, of course. I do believe we live in a rape-tolerant culture (there was even a shocking thread on reddit a while back during which rapists had the opportunity to explain themselves). It’s a serious problem, and universally uncomfortable to talk about. While I think that Harlow did sound sympathetic towards the high school rapists (which was understandably disturbing), McBride makes an excellent point about that: if we constantly see rapists as heinous, inhuman monsters, we will fail to identify them in our everyday lives. They can be our neighbors, our classmates, our coworkers.

And while I don’t know if there’s anything conclusive to be said about all of these recent stories in the U.S. news (besides the obvious: that rape is abhorrent and widespread), I’m relieved that people are discussing the issue. We’re talking about rape, and as difficult as that conversation is, I think it’s an important one to have.

And so, while I don’t necessarily want to spend the afternoon writing about rape in South Africa, I think that it is an important thing to talk about.

The rate of sexual violence in South Africa is the highest in the world. Estimates say that a rape occurs every 17 seconds in that country, and that a woman born there is more likely to be raped than to learn how to read. While 144 cases of rape are reported to police every day in Cape Town, rape is nevertheless notoriously under-reported (some estimates say that less than 10% of all rapes are reported to police, and of those, roughly 10% of rapists are convicted. So rapists have a 99% chance of getting away with their crimes).

The situation is even worse for children. In one of South Africa’s largest townships, Khayelitsha, it’s estimated that one in three children will be raped before they turn 18. One in three. Not even the school that Oprah opened in South Africa was immune to this violence. Part of the problem is the “Virgin Cleansing Myth” – the widespread (and obviously inaccurate) belief that sex with a virgin will cure you of HIV or AIDs.

This means that as the AIDs epidemic spreads, younger and younger children are getting raped.

Are you sitting down? Because this next piece of information is fucking horrifying: infant rape is a growing problem in South Africa.

Infant. Rape. I literally cannot think of two words that should have less business together.

After a few hours of reading all of this, I’m not gonna lie: it all sounds kind of hopeless. It’s ghastly and terrible in a way that I can’t really fathom. And it’s very tempting to turn a blind eye to it and ignore it.

Obviously, that mentality is part of the problem – we need to draw attention to this issue. And it seems like that’s starting to happen, at least a little bit. There are groups that are organizing rape awareness rallies in South Africa. There are clinics which offer care and hope to rape victims (many of whom have contracted HIV or AIDs as a result of the crimes inflicted upon them).

There is, in the midst of all of this violence and brutality, some hope. It’s not much. But it’s something. The conversation has started. And as difficult as it is to do, it’s up to all of us to keep it going.