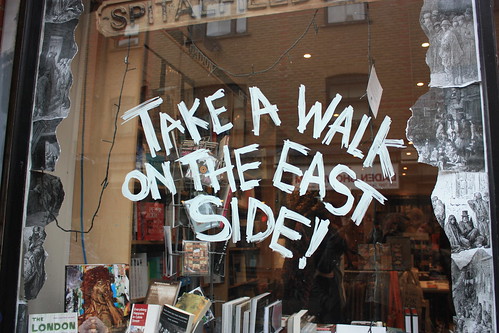 I’ve been to London a good number of times. We usually go at least once a year, sometimes twice, and the total number of trips Rand and I have taken there are numbering close to a dozen. I’m started convincing myself that I’ve seen all the city has to offer. I’ve been to tons of its museums – mainstays like the British Museum and more obscure ones like the Old Operating Theater and herb garret and the London Transport Museum. I’ve visited the Globe, and the Tate Modern, and the Tower of London; I’ve spent way, waaaay too much time shopping in Covent Garden and wandering around Borough Market.

I figured I’d seen London. Been there. Done that. Eaten those. Right?

But sure enough, every time I go, I uncover another corner of the city that I never knew existed. Some magical neighborhood that I’ve never even heard of, much less seen. This time, it was London’s east end – a collection of hip and quirky neighborhoods packed with independent shops and restaurants, street musicians and giant murals.

It was a wonderful reminder that, despite all my trips there, I’ve seen only the tiniest bit of this massive, diverse metropolis. There’s always something new and magical to uncover. Stores to browse in. People to meet. Cookies to eat.

Here are ten photos from our trip to London’s East End.