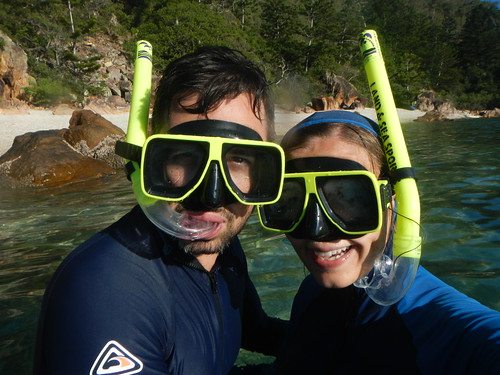 I am pleased to say there was one thing on Hayman Island that was affordable (well, relatively, anyway).

Rather shockingly, it was the snorkeling.

Food was heart-stoppingly expensive, and our room was pricey, but the actual cost of a snorkeling trip? Downright reasonable. For $40 each, we’d get a round trip boat ride to a nearby island, and rental of a mask, dry suit, flippers, and a few beach chairs and parasols.

I was a fan of this: it meant that if you could actually find a way to stay at the resort and afford the food, the activities themselves wouldn’t push you over the edge. Everyone on Hayman could afford to explore the nearby islands – even the college kids who were working at the resort over the summer. 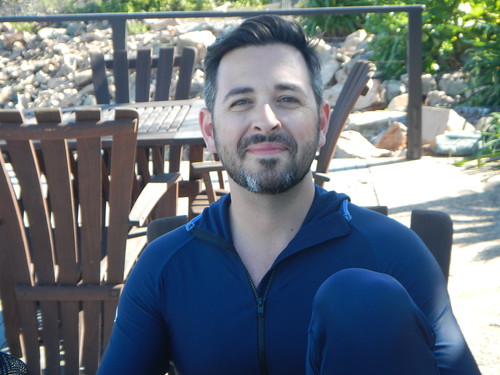 The dry suits made everyone look like they were from Team Zissou. 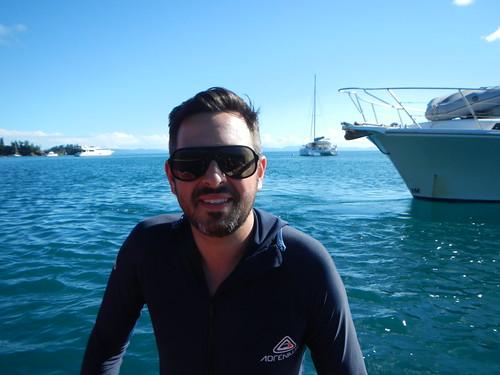 Rand on one of the boat rides out. 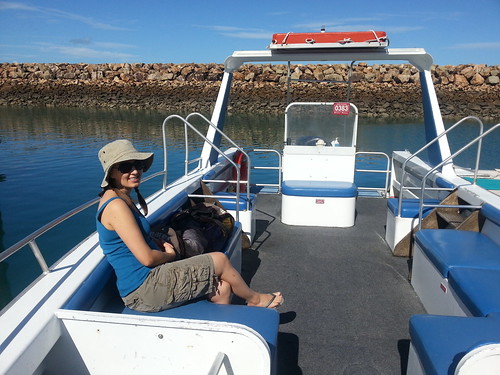 So we went snorkeling … a lot. On some days, Rand would be tired, but I’d gently poke him in the side and say, “Nope. Sorry. I’m gonna make swim with sea turtles.”

We’d already shelled out way too much to stay on Hayman in the first place, so I was going to make damn sure we snorkeled as much as possible. It’s like going to a buffet restaurant: once you’ve paid the fee to get in, the only sensible thing to do is gorge yourself.

We spent one morning on Langford Island. We were the first people from Hayman to be dropped off there, so they had us put the emergency kit out. It held a satellite phone, a first aid kit, and a bottle of vinegar (to disinfect jellyfish stings). 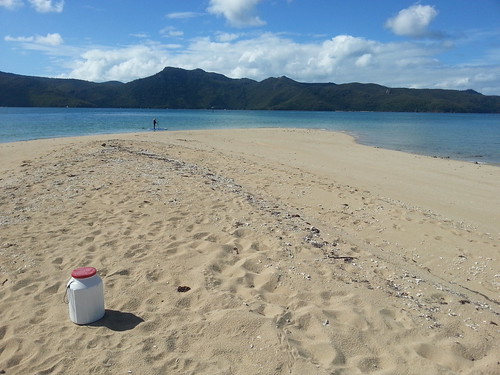 Langford’s big draw is that it’s a haven for sea turtles. One couple told us they saw a dozen or so turtles when they were out there. We saw only three, but it seems silly to complain about something like that. I mean, seeing three sea turtles on a given afternoon seems pretty amazing, right?

Sadly, I hadn’t yet rented an underwater camera, so I have no photos of those turtles, but I did get a few shots of us on the beach. Let’s pretend they’re just as interesting, okay? 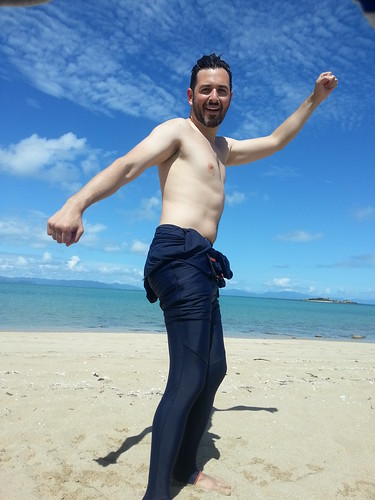 I know. I’m basically the luckiest gal on the planet. 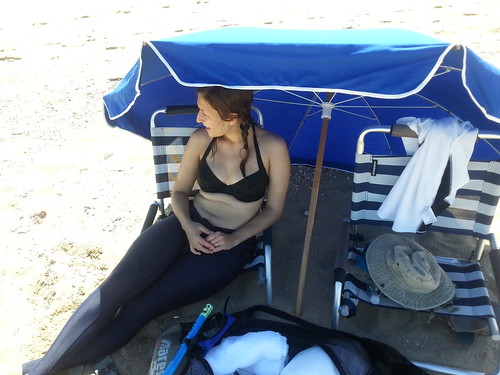 It seems only fair to post a photo of me in all my squishy glory.

On another afternoon, we went to Blue Pearl Bay II (yes, there is a Blue Pearl Bay I, but it’s so shallow, you can only reach it via hiking trails or kayak. We did the latter). 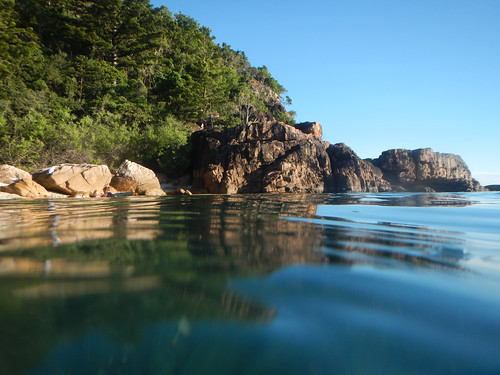 The water there was less clear than it was on the Outer Reef, but there was still plenty to see. 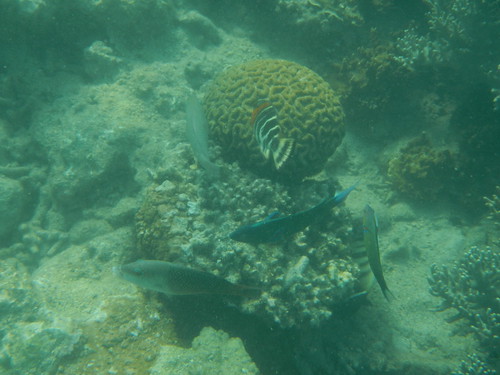 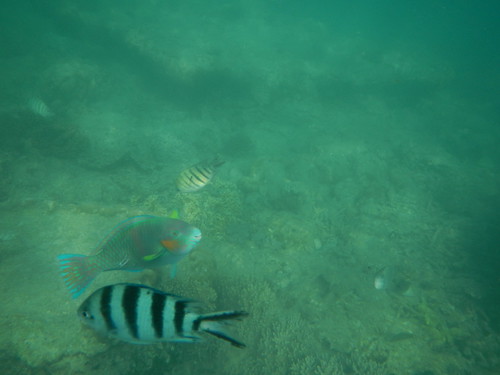 Including brain coral, which is a personal favorite of mine for obvious reasons. 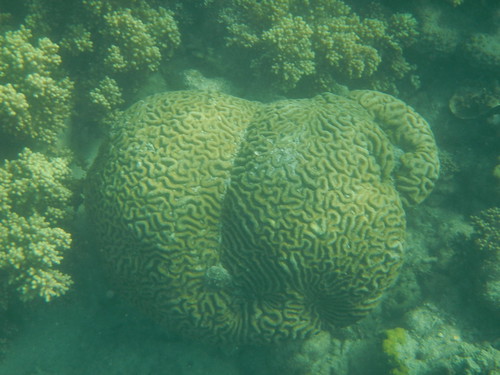 And since there was less reef to explore, it was easier to keep an eye on Rand (we kept losing each other on Langford and in the Outer Reef). 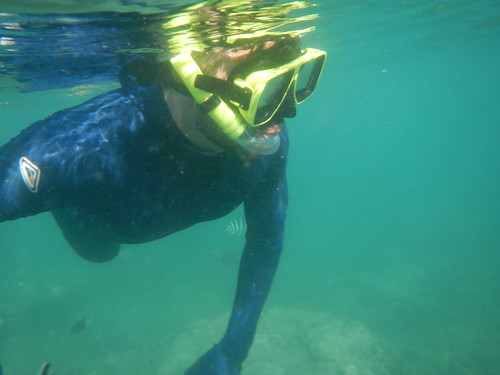 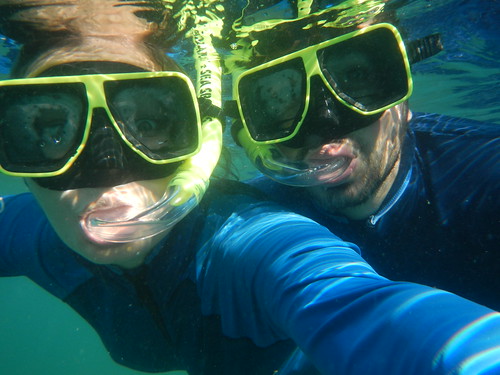 Which was nice, because he was so excited about the fish. 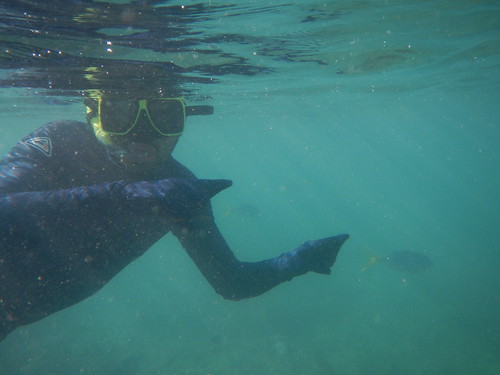 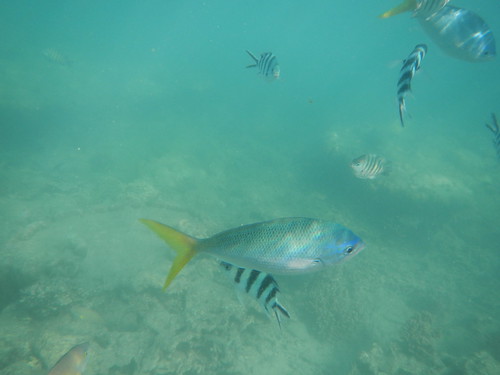 They seemed less excited to see us.

The beach on Blue Pearl Bay II was downright strange, though. It’s made of huge chunks of coral, which make it difficult to walk on, and not particularly comfortable. 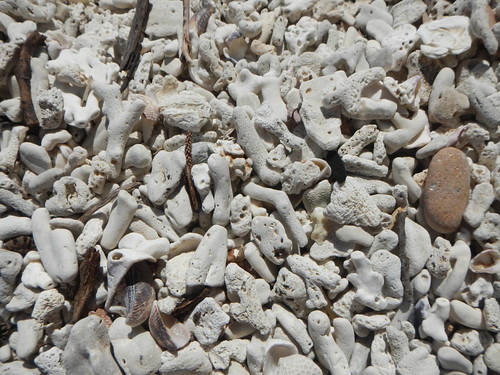 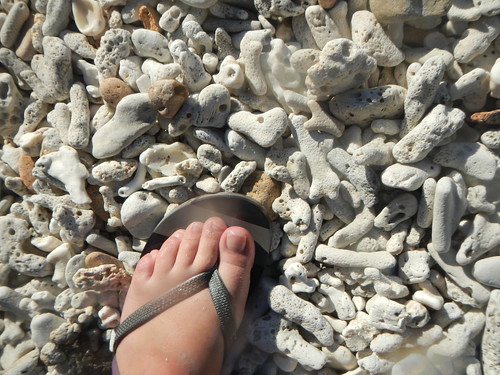 But nevertheless quite lovely: 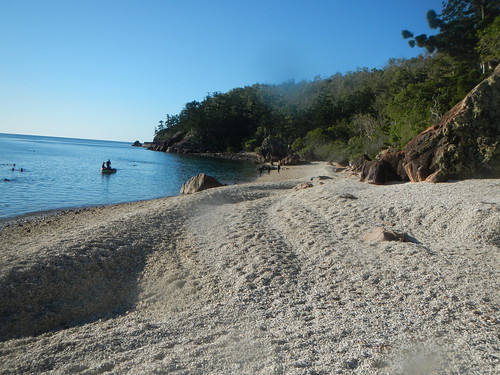 My apologies for the water droplets on the camera lens.

And so we spent another day, snorkeling in the sun, and then took a boat back to Hayman … 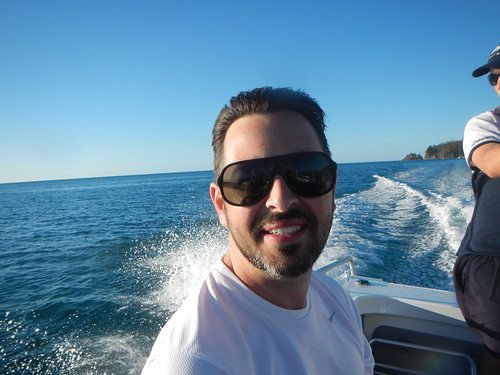 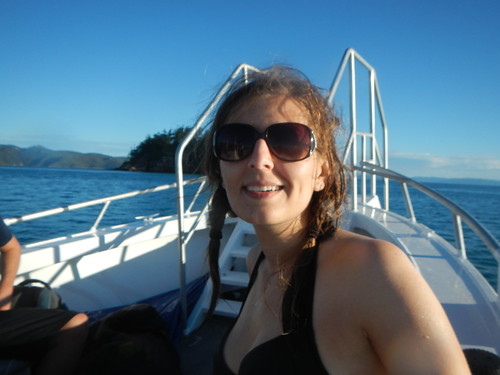 And talked about what we’d do the next day, which, inevitably, would include more snorkeling.