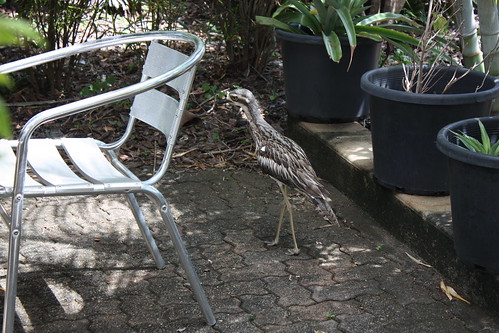 Nature, I think, has a plan for all of us. The nice part about being humans with free will is that we can either choose to go along with what nature dictates, or fight against it every step of the way.

For example, given my wide hips and my terrible sense of direction, it’s clear that nature never intended for to wear skinny jeans or to travel, and yet I keep doing both. Granted, I have middling degrees of success with each of these endeavors (and often my attempts leave me in a tearful puddle, cramming cookies into my mouth at breakneck speed) but the point is that I tried. I deviated from what nature had planned for me.

Every day that I walk out of the door in too-tight jeans, with no idea where I’m headed, is, in this sense, a small victory.

Similarly, every day that a Bush-stone curlew is able to walk around, and not be eaten by a half dozen predators, is a victory, too.

Because clearly, that is what nature had in mind when it thought up the curlew.

I’d never heard of this particular bird before our visit to Australia. Apparently it’s a distant cousin of the road runner, but whereas an entire childhood’s worth of cartoons have taught me that the North American variant is clever enough to outwit a coyote, the curlew might be one of the dumbest creatures to have ever existed.

They thrive on Hayman Island, and throughout the Whitsundays, where they have relatively few predators. And good thing, too. Because here’s the curlew’s fatal flaw: when it gets startled, it freezes.

I actually know this tactic quite well. I’ve done it before, usually when I’m attempting to cross an intersection on foot, and a vehicle is bearing down upon me, the driver completely unaware of my existence even as he’s about to smear me on the pavement.

The reasonable reaction would be to run, or jump out of the way, or, at the very least, scream my head off. But no. Instead, I freeze, and stare blankly ahead. Like a deer in the headlights.

Or like a curlew, pretty much any time it sees anything that might do it a modicum of harm.

Often, this means that they get caught in awkward positions – with one foot still in the air as they were taking a step, or with their heads half crouched down. And they stay like, failing to realize that being motionless does not, in fact, make you invisible.

While I hate quoting Wikipedia, I rather love the description of a curlew that the site offers:

When disturbed, they freeze motionless … For visual predators like raptors (and humans), this works well, but it serves little purpose with animals that hunt by scent such as foxes, dingoes or goannas.

In short: the curlew’s survival mechanism actually works against it with a lot of predators: it stands, in a weird position, waiting to be eaten. Keep in mind: this is actually an animal that can fly. Seriously! It can fly, and INSTEAD IT CHOOSES TO REMAIN MOTIONLESS WHEN THREATENED. Is that not completely amazing? Doesn’t the sheer wonder of that make you want to jab your thumbs into your eyeballs until you see stars?

Curlews were everywhere on the resort – on pathways, in hallways, at the edges of a pool. They’d start running from us, but, counter-intuitively, would stop abruptly as we neared, eyeing us with a look that can best be described as “super pissed off.” 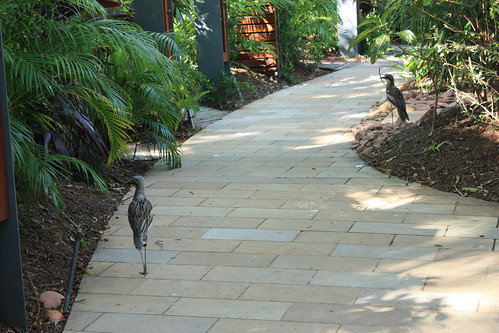 Other times, we’d see evidence of them, but not the birds themselves. These signs did not, in any way, suggest that the curlew was smarter than I’d previously estimated: 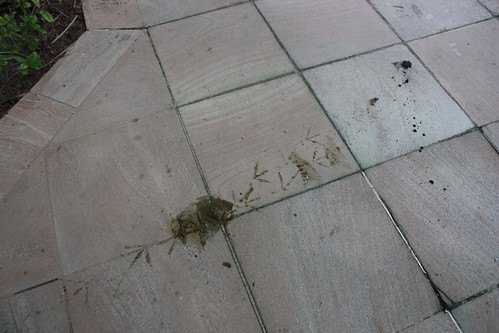 Miraculously, it appears that this bird managed to walk into this pile of crap twice, from opposite directions.

I mean, seriously: this is NOT AN ANIMAL THAT IS MEANT TO SURVIVE. Instead of flying or running away, all it does is stand very still. And yet, despite its stupidity and tendency to not move at all when threatened, despite its population being decimated by habitat destruction and hungry foxes, and (I’m speculating) the occasional resort golf cart, the curlew carries on.

Really, it’s kind of inspiring if you think about it. Sorta makes you want to throw on some skinny jeans and run outside with no clue of where you are going. Again and again and again.