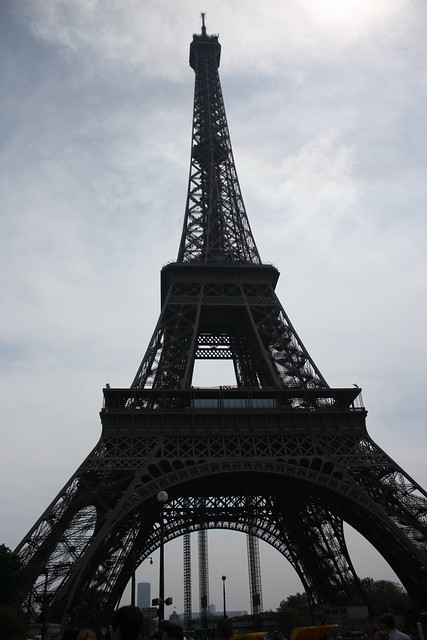 If you do a modicum of searching online, you’ll find a wealth of information about the Eiffel Tower. How it was designed by Gustav Eiffel, and built by his construction firm, for the 1889 World’s Fair. How it indirectly led to the building of the first Ferris Wheel, because when the Chicago World’s Fair rolled around a few years later, they needed something to compete with the Parisians. You may read about how the tower is still, to this day, the tallest building in Paris (at a rather modest 1063 feet), in part because city building codes have prevented the construction of anything taller.

You will likely find tons of posts from travel bloggers who went to the top of the Tower, and who will give you an account of their visit that is both informative and practical. Those posts will probably not be full of pictures of said travel bloggers making out with their significant others and generally being a total dorkus malorkus.

That is where this post and those other ones differ. Because here’s the thing: I went to the Eiffel Tower, and I didn’t make the trip up to the top. No. There are tons of reasons why. Here are the few that I remember:

But ultimately? I think it’s because I’m not all that good at travel blogging.

It’s just that I occasionally do things, and think, “This is not how a travel writer would behave.” Rick Steves, were he to ever click through my site, would surely shake his blonde flowy locks in digust.

And this realization has led me to believe that perhaps mine is not the most helpful or informative travel blog. That’s not to say it’s without merit. It makes for a decent “you guys, let’s not take travel too seriously” blog. And an “OMG, this dessert is amazing” blog.

And I’m pretty sure I’m at the front of the pack of “let’s make out in front of historical landmarks” blogs.

In that respect, Rick Steves’ got nothing on me.

So while I may have neglected to note the price of admission (14.50 Euros, it turns out), I did manage to note that the line to get up the Tower is ridiculously, ridiculously long, even if you arrive early (and that you should probably reserve tickets online ahead of time). 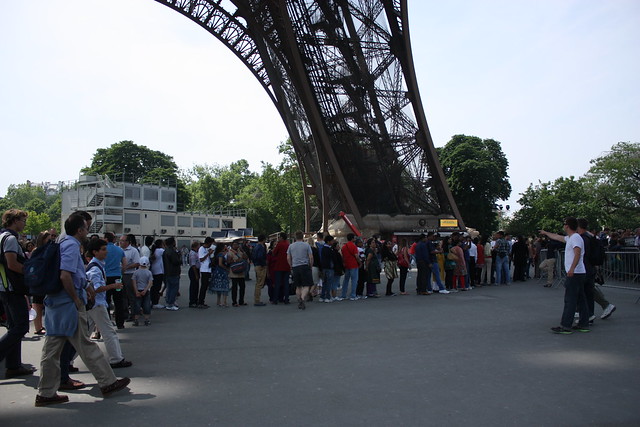 And that honestly, just walking around in the shade of the tower can be gratifying. 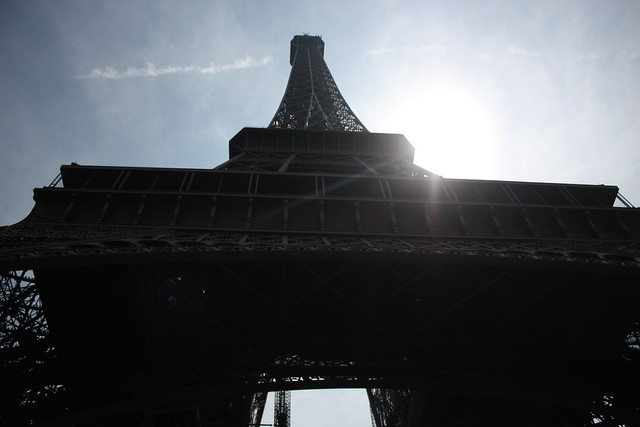 Though it may awaken a latent desire in you to buy an Erector set. At which point you will start giggling, because Erector. 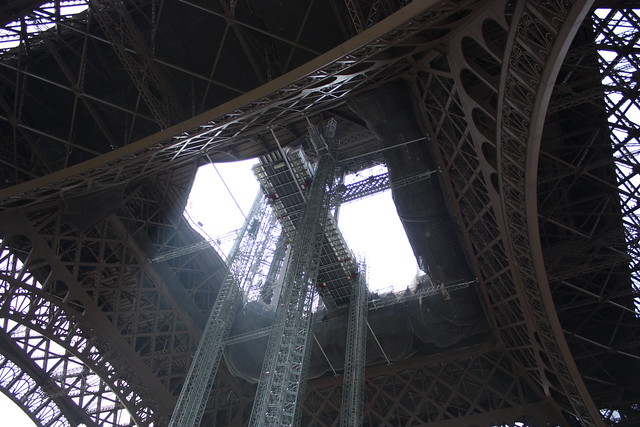 Not far from the massive line to get in, there is a soft serve ice cream stand. Were I a better travel writer, I would have remembered the location of the stand, or the price of the ice cream (it was pretty reasonable, I think), or had something more poetic to say about it besides, “It was yummers.”

Instead, I took this photo, which I love. 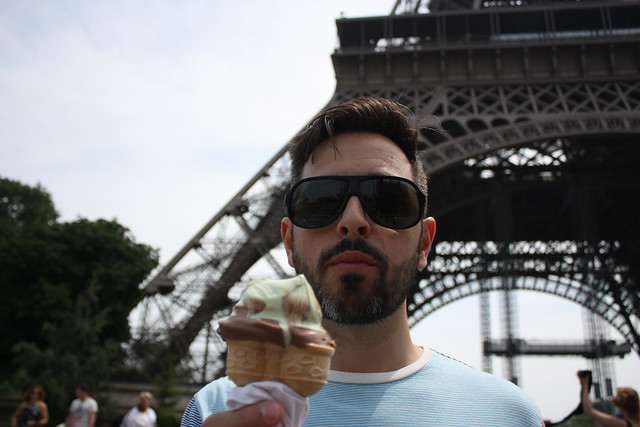 Rand got a cone, and proceeded to hold it in a rather dramatic fashion. I don’t really know why.

Numerous subsequent self-portraits of us would include that ice cream cone. 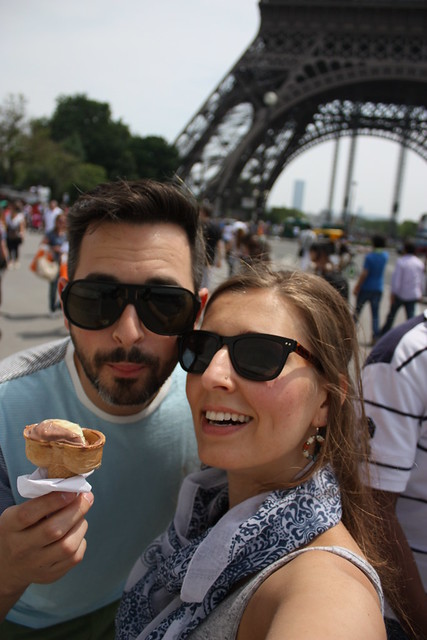 This post does contain one piece of useful advice about visiting the Eiffel Tower.

Are you ready? Here it is: after you are done walking around the base, you should walk over to the Trocadero Gardens, built in I-don’t-know-when (it was the 1930s!), by I-don’t-know-who (Roger-Henri Expert!). The views of the tower from there are positively excellent, and on hot days a cool mist from the Fountain of Warsaw will land on your skin and hair. 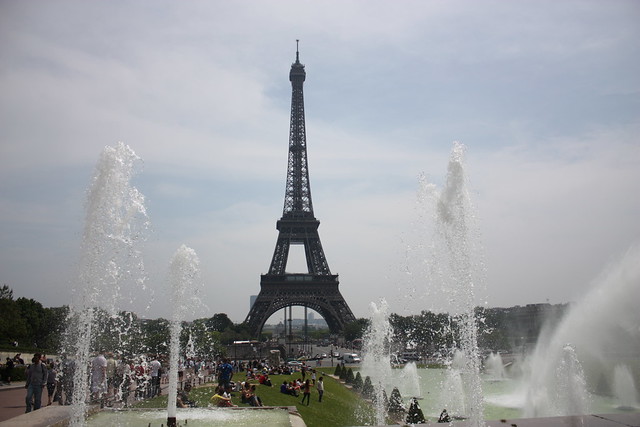 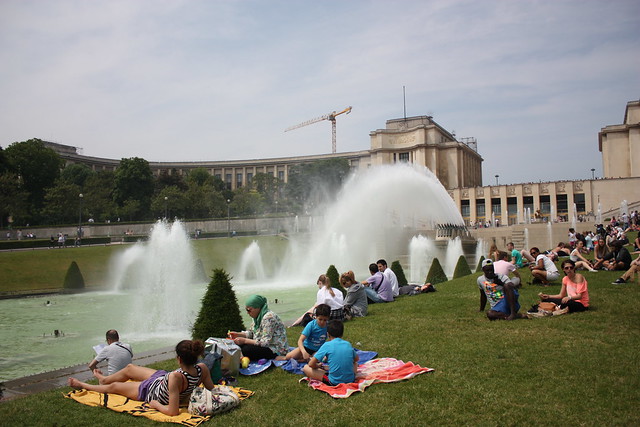 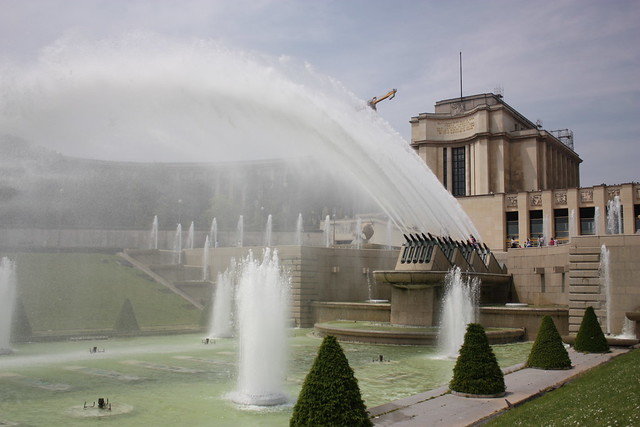 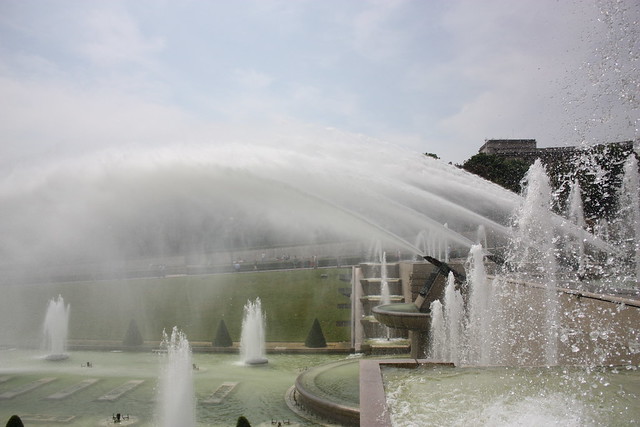 There, you can take photo after photo of you and your sweetie, with the Eiffel Tower behind you. And it might be cliche and a bit overdone, but it’s still romantic as hell and really fun. 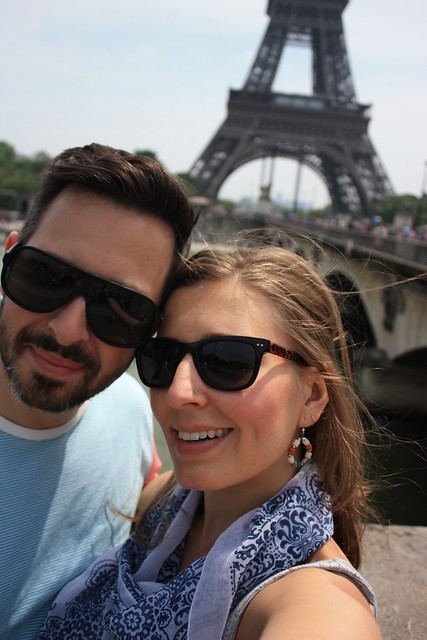 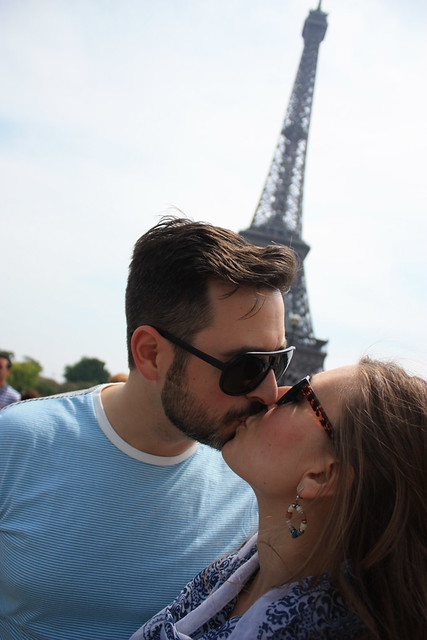 And if you are really lucky, you will be traveling with someone who will see this mosaic (which looks a little like a green football goalpost) … 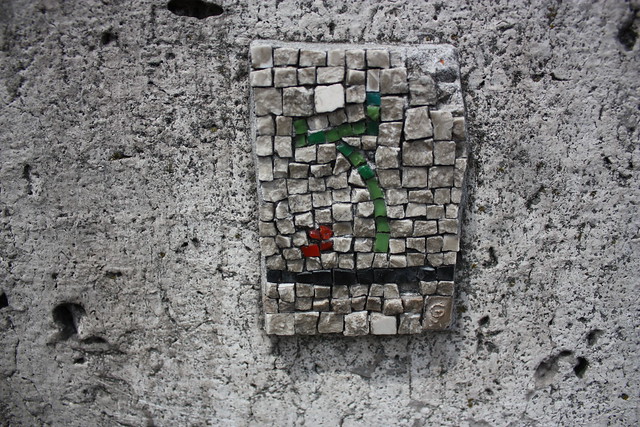 And will be inspired to do this: 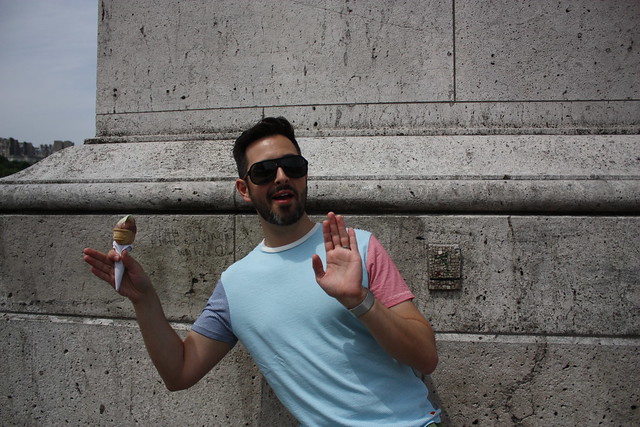 This behavior will confirm that he, too, is a dorkus malorkus, and even though you don’t believe in soul mates, you’ll know you picked a good one. More importantly, he will be in no position to judge you when you insist on confusing your tourist cliches … 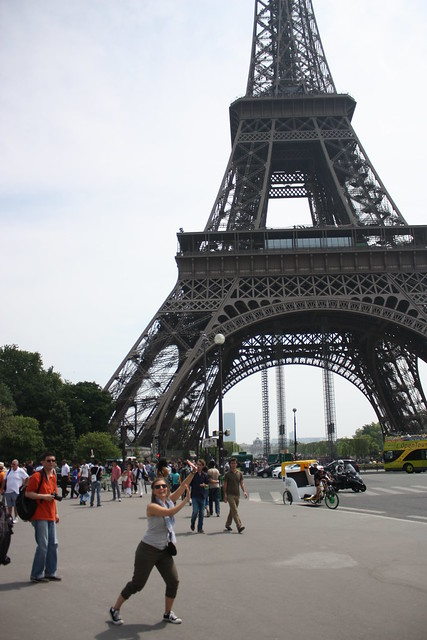 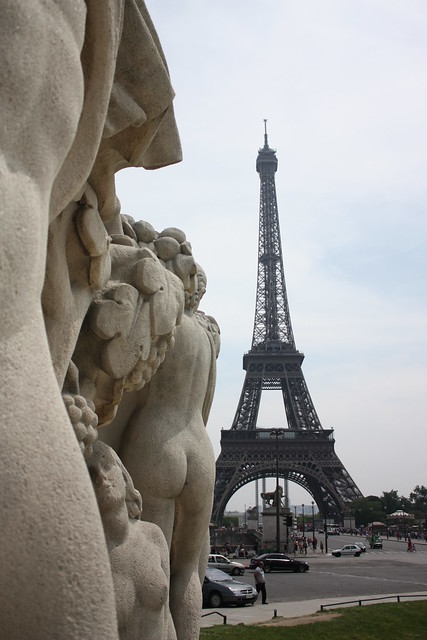 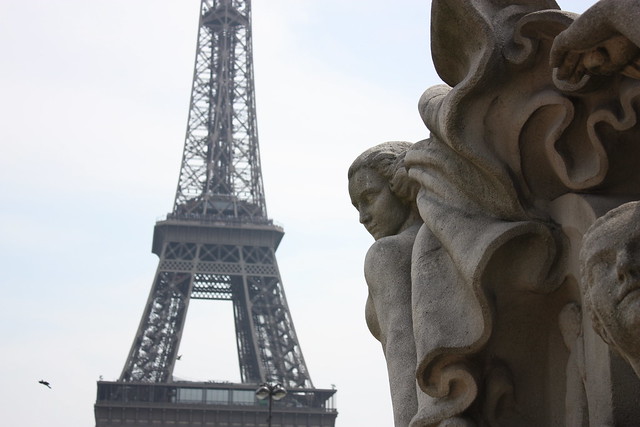 But eventually just photograph the butts of the statues and giggle like an 11-year-old. 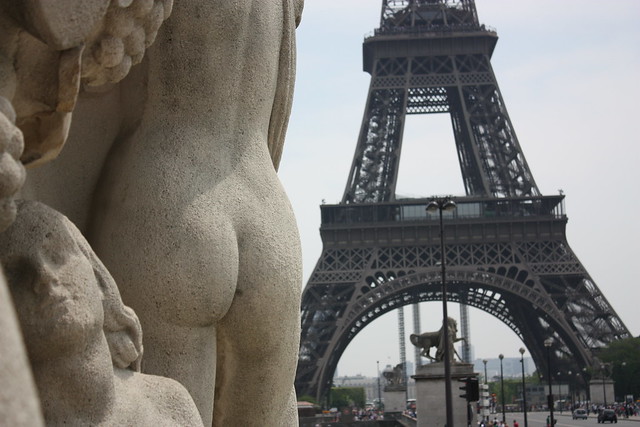 That’s what we did. But I suspect that most people who visit the Eiffel Tower won’t do any of that stuff (even though the propping up the tower thing is really, really fun). And I guess that, practically speaking, this post is mostly useless.

It may be that I’m not all that good at this travel writing stuff. 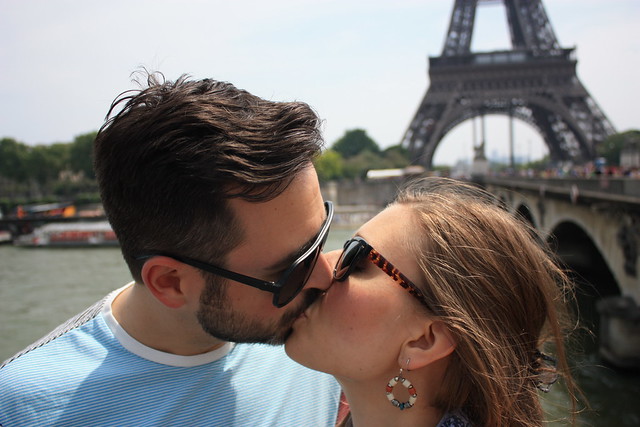