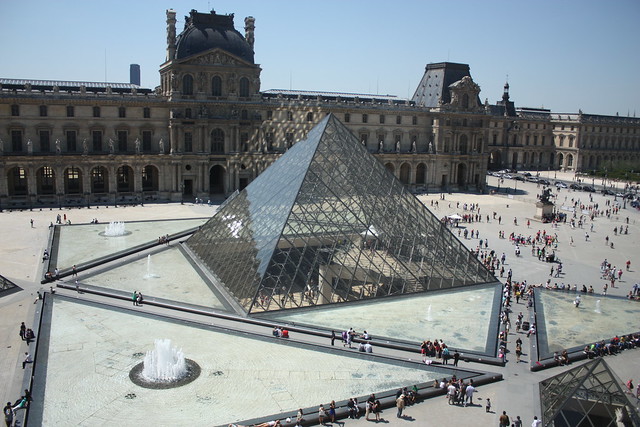 It’s Wednesday, and I find that I’m still recovering from a weekend full of Bacchanalia spent up in Canada. There was so much … excess. I made so many bad decisions (most of them nutritional, though a few were sartorial) that at one point I turned to Rand and said, “This feels like college.”

And as I reflect, with no small matter of cringing, upon my mistakes from not only this weekend but also from the late 90s (oh, god, my hair), I realize now might be the perfect time to tell you about my visit to the Louvre.

Because as far as museums go, that place is a fucking frat party.

I headed to the Louvre around 10:30am on a Thursday, hoping to avoid some of the crowds, and I daresay I succeeded, though there were still scores of people everywhere. My wait in line was short, and I passed the time pleasantly by eavesdropping upon the conversation of the Milanese couple in front of me, and the Argentinian couple in front of them. (If you learn a language for no other reason than to invade the privacy of others, it’s still worth it.)

I never really understood, prior to visiting it, how the Louvre was laid out, but now I know that it’s a sort of beautiful, brilliant madness. There is the glass pyramid in the middle, and if you neglected to get your ticket beforehand (which I did), this is where you will have to stand in line, hopefully briefly, baking in the midsummer Parisian sun (which, also, I did). 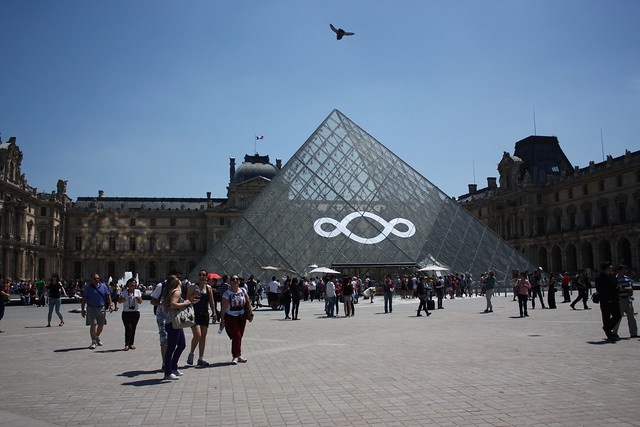 Upon entering, escalators immediately take you underground (for the rest of the museum makes a ring around the pyramid, and it is only by going down a level that the two are connected). It’s ingenious, as it gives one relatively easy access to any wing of the museum, but also sort of mental. The glass pyramid works like a greenhouse, focusing the heat of the sun directly down to this area, which is swarmed with people. 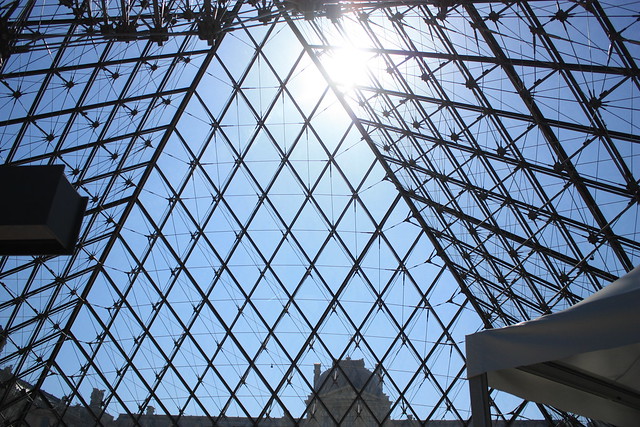 It is precisely like climbing down into an ant hill only to find that some 10-year-old sociopath, armed with a magnifying glass and a keen understanding of electromagnetic fields, is hovering above.

I scanned the chaos (think Grand Central Station at rush hour) and decided something: I needed to get out of there as quickly as possible. I grabbed a map, and stuck to it religiously. I’d try to see every single piece that was highlighted in the glossy pamphlet – no more, no less – and then I’d get the hell out of here and have myself a steak frites and a creme brulee the size of a Frisbee. 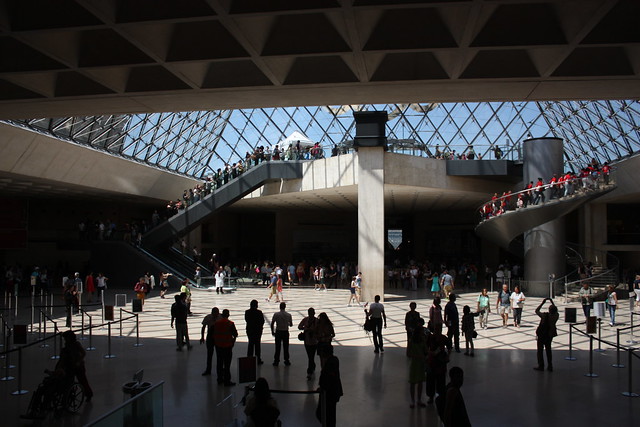 All of these people are waiting to rob you.

I could do this, I reasoned. I’d survived college. This place wasn’t all that different. I just needed to clutch my purse to my side, weave my way through the crowd, and not accept any drinks that I hadn’t seen being poured.

First on my list was the painfully obvious choice: the Mona Lisa. It’s a bit of a walk to find her – she sits deep within the museum, to avoid those pesky run-in, run-out-with-an-Edvard-Munch debacles that befall other museums.

There are, fortunately, signs everywhere directing you to her location. I had to resist the urge to stand in front of one and, in an exaggerated American accent, yell, “ANYONE KNOW HOW TO GET TO THE BONER LISA?” 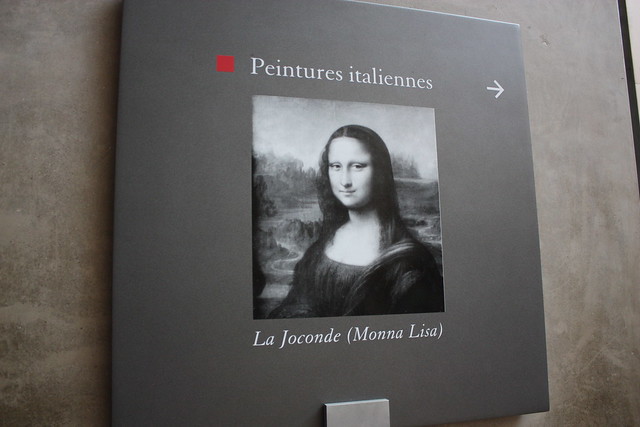 Honestly, I’m so well behaved, I should meet the friggin queen (“Tell me, ma’am, have you had the occasion to visit the Louvre and see the Mona Lisa? Wanking good time, innit?” See? I’m ready for a career in diplomacy.)

You’ve probably heard, time and again, how the painting isn’t that large in real life (a criticism which always seemed odd to me. Are only big things awesome? Clearly not. Counterexample: Davy Jones). It’s true, of course – the work isn’t terribly big, but its reputation is immense.

As one writer put it, “She is a painting-superstar, a celeb, an icon, a spelling mistake.” (For the correct name should be the Monna Lisa.) I’d seen her parodied countless times, seen her image reproduced, with its enigmatic smile and absent eyebrows – which may have been intentional, or possibly a result of over-cleaning – on everything from magnets to underwear.

And now I was weaving through the crowd as though moving to the front of the audience at a concert, in hopes of making a connection with her. I stood, a mass of people around me, jostling and shoving as they snapped photo after photo, listening carefully to see if she would tell me anything. Perhaps it was too noisy, or perhaps she’d already said everything she had to say, because I heard not a word. 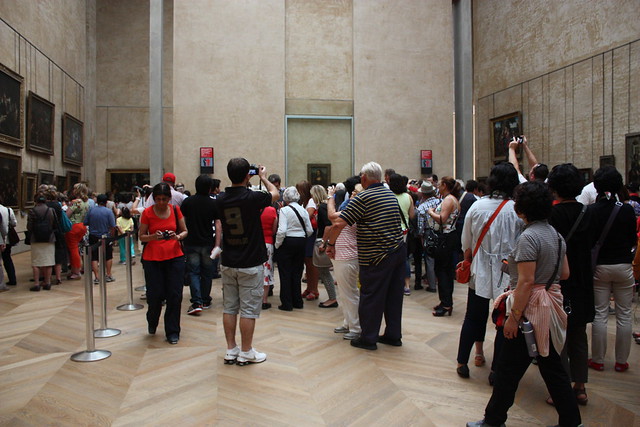 This is the mob of people around her on a slow morning. 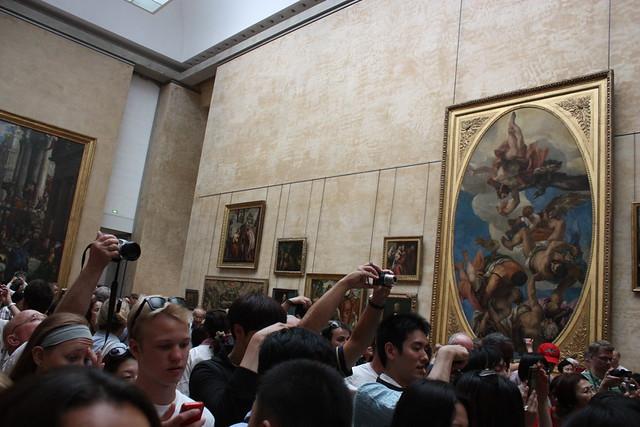 OMG, let’s all take the same blurry photo of the Mona Lisa, okay? On three … One, two … 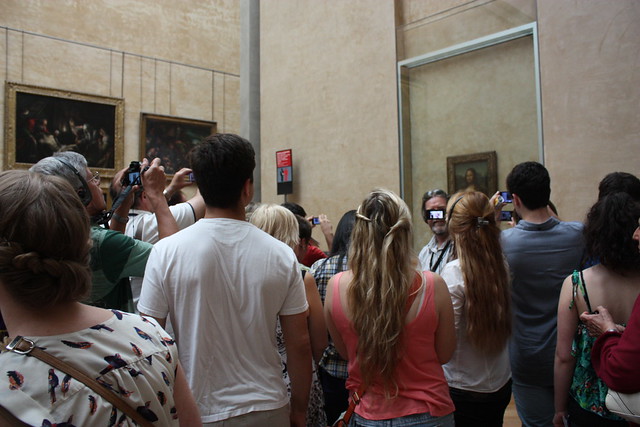 The Mona Lisa didn’t stir anything in me, didn’t hurt my heart like Degas’ Little Dancer did, didn’t make me marvel, mouth half hanging open, like Seurat’s Models. She is famous and lovely, I guess, but the nuances of why escape me. 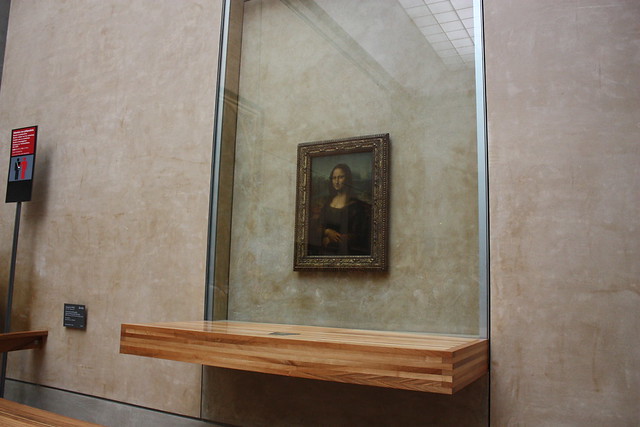 She sits behind bulletproof glass, and this is as close as you can get, because people are animals.

I moved on, spent the next hour and a half wandering through a sea of people and madness. The map led me through more crowded galleries, past the Venus de Milo and a headless winged statue of victory. 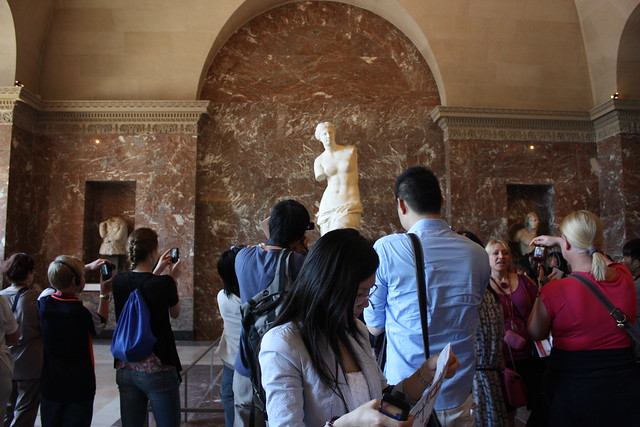 Again with the crowds … 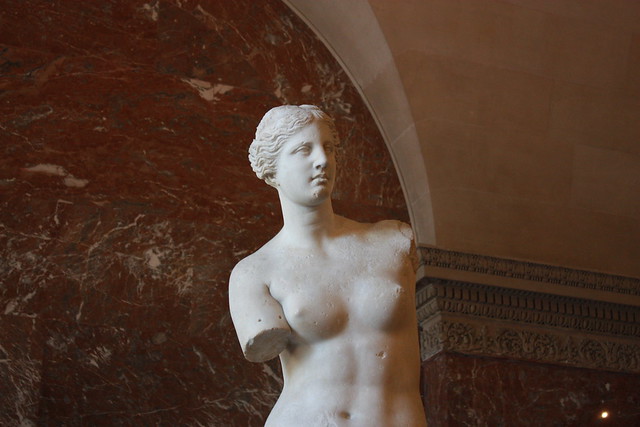 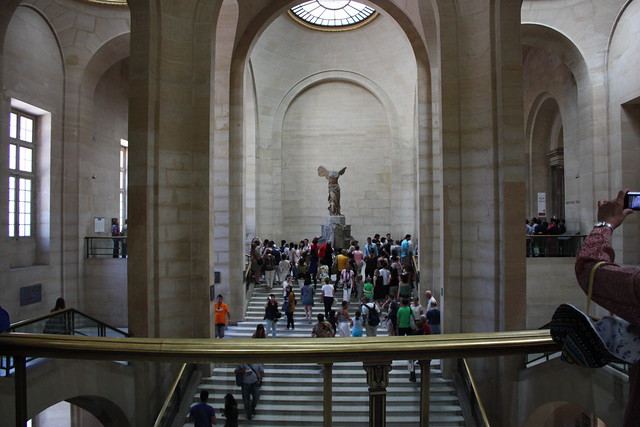 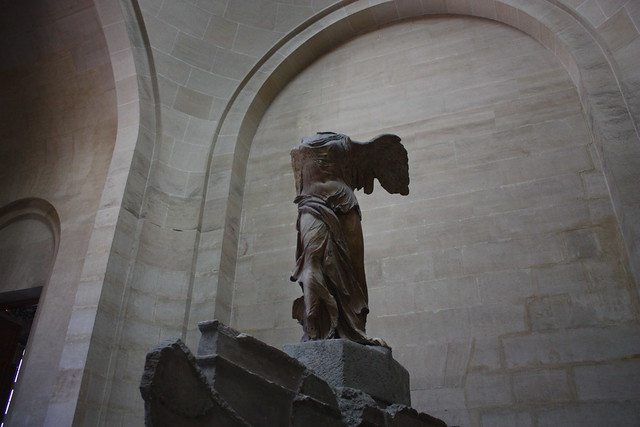 There was an enormous rendition of Athena, so stained around the lips that I couldn’t help but think, “You have fruit-punch mouth.” 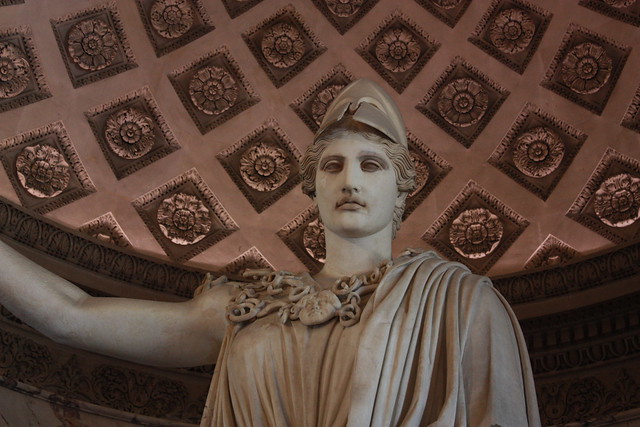 By now, you may have noticed that I broke my rule about taking pictures in a museum. Photography (sans flash) isn’t prohibited in the Louvre, and I decided to make an exception to show you exactly what it’s like inside. My deviation from my own set of rules isn’t that shocking when you consider this: the Louvre is a lawless place. 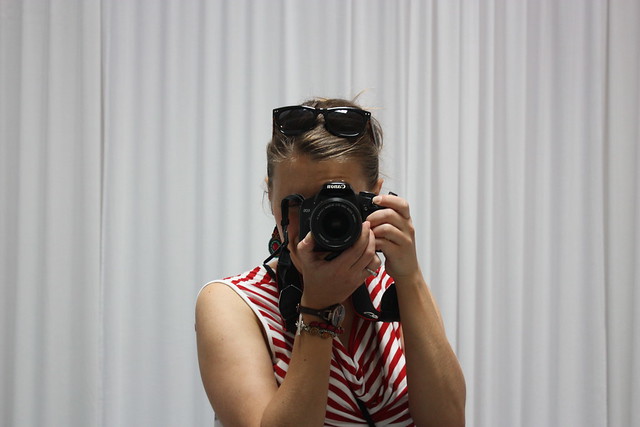 The museum is a playground for pickpockets. I wonder if the thieves buy a one-time admission, or if they have a membership. 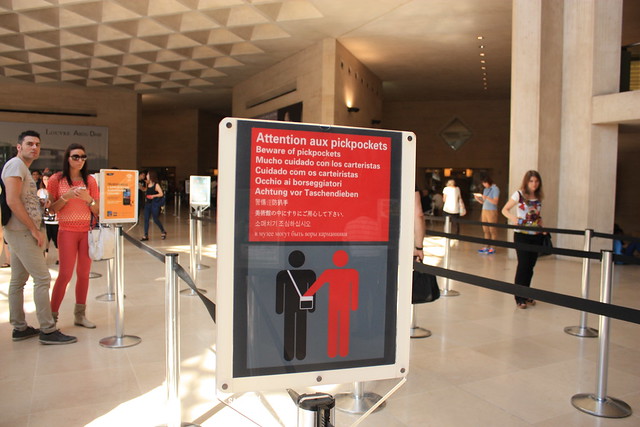 A few signs were placed around, feeble attempts to restore order: Speak softly! No flash photography! Do not touch the art! The latter request seemed so obvious, that it hardly seemed worth mentioning, until I saw, time and again, people reaching out and feeling sculptures and statues. Their ability to appreciate art, it seemed, was located exclusively in their fingertips. 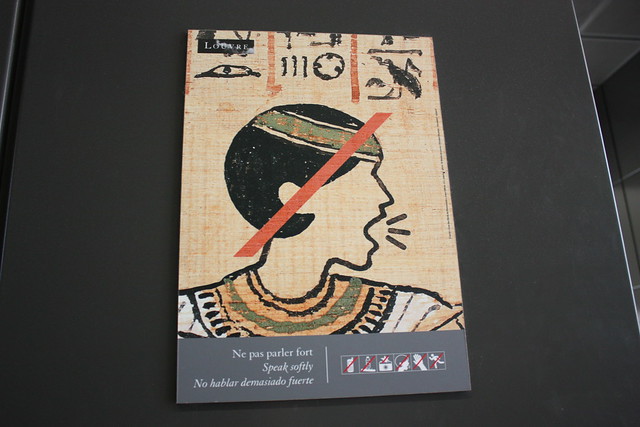 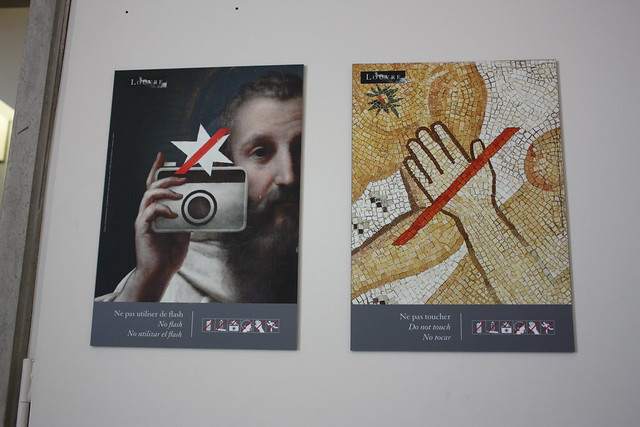 These rules were so continually and blatantly disregarded, I began to wonder if I was the crazy one. Maybe we’re supposed to touch artwork!  And lean up against it while wearing cutoff shorts and midriffs. And lick it. YES. THAT IS WHAT LEONARDO WOULD HAVE WANTED. FOR ME TO LICK THE BONER LISA.

I spent a few long seconds looking at this relic, so close I could almost touch it. And why shouldn’t I? Everyone else was doing it. What the hell is the point of paying 11 Euros admission if you can’t make out with a sphinx? 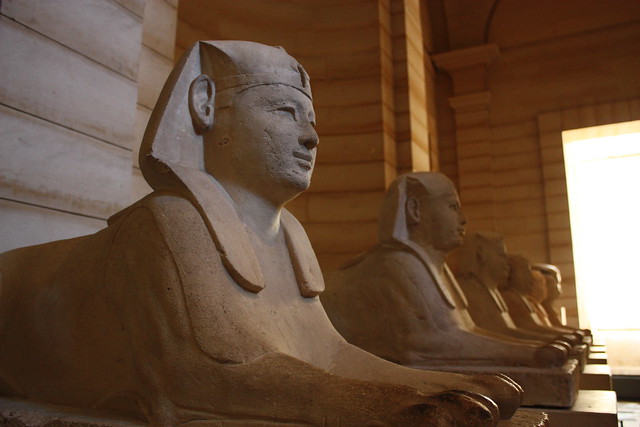 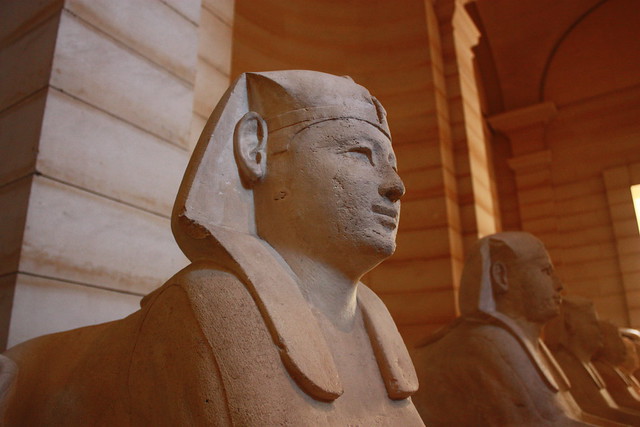 Gah! NO. NO. The madness of the Louvre is contagious. Spend enough time there, and you’ll forget all rules of society. I backed away, horrified at what had almost transpired. I returned to my map, trying to gain some composure.

This proved to be a far more difficult task that I had imagined. All of the galleries in the Louvre are numbered, but the sequence starts over again down every single hall, and the intersection of two corridors can be disastrous. You will literally encounter two galleries 18 within a few feet of each other. Trying to discern, from your map, in which gallery you are standing is virtually impossible (both are flanked, predictably, by galleries 17 and 19, all of which are clustered in the same corner of the museum).

If this happens to you, it is entirely acceptable to curl up into a ball and cry, which I was rather close to doing before I rounded a corner and bumped into Delaroche’s Young Martyr. 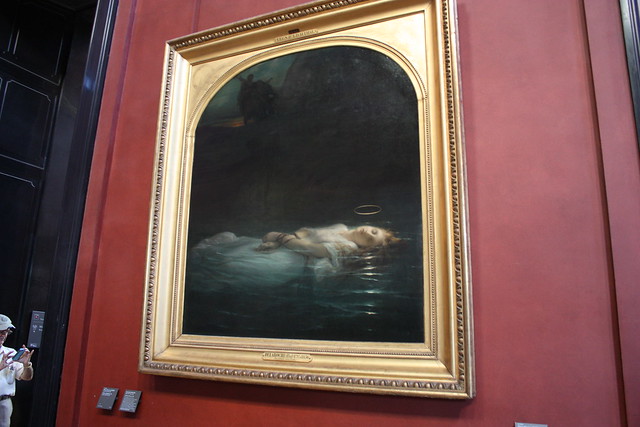 Back in college, I’d hung a poster of this painting on the exposed brick wall of my studio apartment. You might say I was inclined towards melancholy (and melodrama). She remained up until Rand came along, bringing with him so much damn happiness and love, I had no choice but to roll up my macabre roommate and banish her into a long paper tube.

Seeing her again was like bumping into an old friend (albeit a kind of depressing one). We had a moment, she and I, in one of the four galleries numbered 76.

Reassured by my short visit with the martyr, I continued the hunt for Gabrielle. Along the way, I encountered a few contemporary pieces that were a delightful commentary on the Louvre experience. 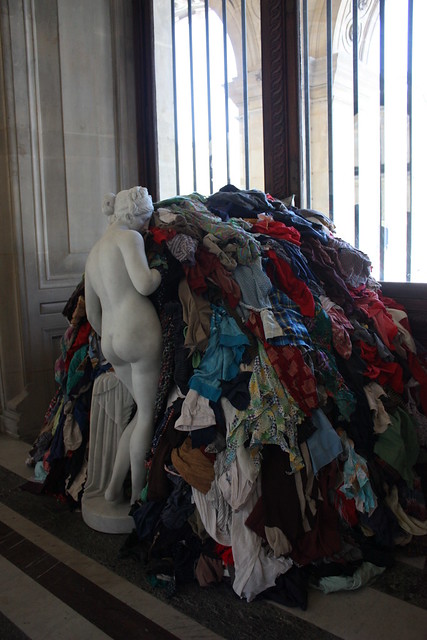 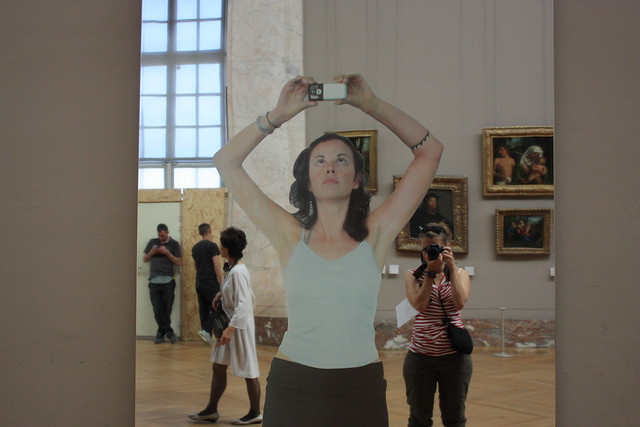 Her image was printed on the mirror. Pretty clever, no?

And then, finally, finally, I found the painting I had been searching for, and it concluded my visit perfectly: 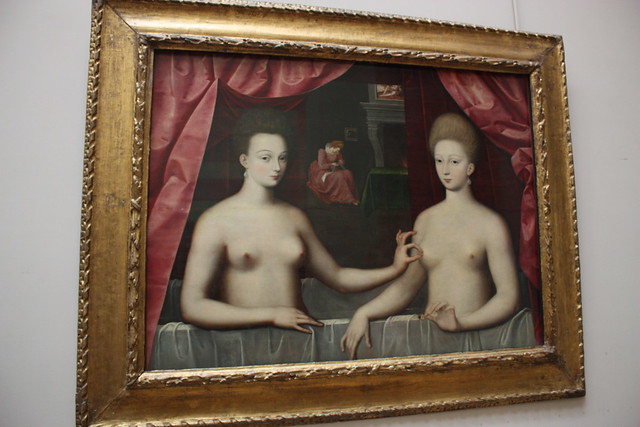 I spent a few seconds alone in the gallery, having a delightful giggle over the portrait of Henry IV’s mistress (at right, presumed to be pregnant), and her sister (whose unconventional gesture towards her sibling was supposed to suggest fertility).

And then, exhausted, defeated, and feeling … well, to be honest, feeling not unlike I feel right now, after this damn weekend – I went back to the hotel and found my beloved.

“How was the Louvre?” he asked.

“Ungh. It was a madhouse,” I said, my voice muffled by the bed on which I lay, face down. “I spent half an hour looking for the painting of the two naked chicks where one is pinching the other’s nipple.”

Rand laughed, and I could feel him smiling at me as I lay, limp and somewhat broken, on the bed.

“Do you want some steak frites?” he finally asked.

Yes. Yes. A thousand times yes. Rescue me from the Bacchanalia of college, the madness of my early twenties, the chaos that is the Louvre. Put my world in order and make sense of all of it, and then feed me and hold me close. Because, darling, I have no idea why the Mona Lisa smiles, but I know why I do.