I am climbing the stairs up and out of the subway, and before I even reach street level, I know: I’m lost.

There are only two subway lines in Philadelphia, and I’ve managed to get on the wrong one. There’s plenty of amusement to be found in the situation (seriously, how the hell did I even manage this?), but at the moment I feel only stress.

I look up and down Spring Garden, the street for which this subway stop gets its name. None of this looks even remotely familiar, though this feeling of being lost in a strange city is one I know all too well. I am distracted, and so when a cigarette-wielding young man asks me if I have a light, I only mumble no, and look past him for some landmark, something I will recognize.

“Hey,” he says, gesturing to my camera. “Will you take a picture of us?”

“Sure,” I say, without thinking twice.

This catches them off guard.

The rush to pose, and for the first time, through the lens of my camera, I see them. They are young. Smoking is something new – so new, they don’t even have a lighter. One of them tries to look tough, but it’s too late: they’ve given themselves away. I can see the excitement on their faces, the happiness at being in the spotlight.

The kid on the end makes a rude gesture with his hand – two fingers held up to his mouth, his tongue sticking out between them. I shake my head.

“That’s vulgar,” I say. “I’m not going to take your photo until you stop.”

Dutifully, he lowers his hand but it is still in motion, blurry, when I take their picture. 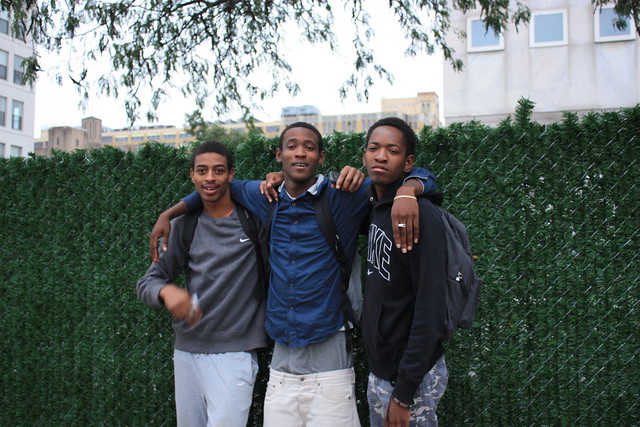 Click. I only take one. I’m still too self-conscious to take photos of strangers, even if they are willing. They don’t even ask to see it – I wonder if they are still surprised that I said yes, or perhaps they realize once again that they need to look cool, and crowding around my camera won’t really accomplish that.

One of them gestures his unlit cigarette at me.

“You gonna put that up wherever you put those up at?”

“Yes,” I say. Yes, I am. They seem satisfied with this answer.

I turn and head back down into the subway, stare at a map, and realize where I made a wrong turn earlier. I head back the way I came, in possession of one more photo, a souvenir from the Spring Garden subway stop, courtesy of the three young men, one of whom, I now realize, really needed to pull up his pants.