I’m sorry for the lull in blogging, and the long delay in recounting the highlights of our Philly trip. I promise to get back to all of that tomorrow. Today, though, I wanted to tell you about something that happened during our weekend jaunt to California. Because I think the full force of it hasn’t hit me yet (pun not intended). 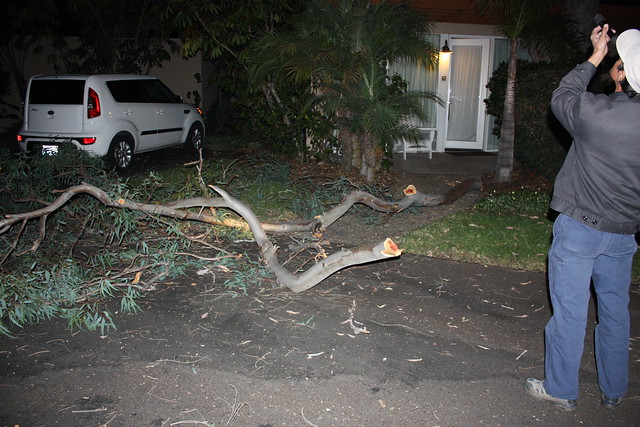 A member of hotel staff tries to figure out what the hell happened outside of our room.

I often have odd reactions to things, both emotionally and physically. To me, they make sense, of course. But anyone else would think I was a bit strange.

I have slow reflexes, and my flight or fight response is clearly broken. I once saw a car careening towards my friend Lauren, and my response was to rush over to her, put my arms around her and … stand perfectly still. So, you know, she wouldn’t be alone when the car hit her. That was my way of protecting her, I guess. (Spoiler: we were fine.)

This is true of my emotions as well – they take a long time to bubble up to the service. I take my sweet time processing things, and long after an event has transpired (and long after I’ve assumed that I’m “over it”), something will trigger those deep down emotions, and I’ll find myself desperately crying over something that, to any sane person, isn’t sad at all.

The following things have, unexpectedly, triggered a watershed on my face:

To be fair, during the first incident, I was actually crying over the death of my grandparents, which had happened 2 years prior. The Tate Modern incident had to do with a serious injury my father had sustained early that year (I was going to see him later that week for the first time since his accident), and the pie was all about my brain surgery which happened months before. Obviously.

The thing is, I take my sweet time figuring out how I feel about things. And that’s okay, usually. Because usually there is time.

I’m waiting for what happened on Thursday night to hit me. I’m waiting for my reaction to it. Presently, I don’t really feel anything except a bit of anxiousness. A gnawing sort of weird panic when I think about what could have happened. I suspect that it might get worse as time passes. I don’t really know.

Let me just tell you what happened.

We were in San Diego where my husband was, as usual, speaking at a conference. He often accepts speaking events in Southern California, because it means we get to visit my family, and this was no exception. I got to spend the better part of the day with my aunt, and we had dinner with friends, which meant that when we finally checked into our hotel (much to my aunt’s disappointment, as she wanted to host us), it was after 9pm.

Paradise Point, where we were staying, is a lovely little resort-style hotel, and it’s often pretty affordable in the off-season. The downside is that it’s a sprawling affair, and it’s remarkably easy to get lost. Every room is its own little one-story cottage (occasionally, but not always, sharing adjacent walls), back when it was financially feasible to do that sort of thing in Southern California. The cottages are clustered into groups with ridiculous, resorty-sounding names like “Oasis” and “Pine Hill” and “Sleepy Lotus” (or something to that effect).

Finding your room is difficult during the day, but in the dark, it’s near impossible. Fortunately, we’d been there a few times before, so I gingerly drove down several of the many, many lanes that crisscrossed the property, and, remarkably, made not a single wrong turn. Rand pointed out our designated parking spot sharply to our left, and I turned the rental car in a wide arc (gently cutting across some grass), so that we could slide right in, no need to back up and re-maneuver to straighten us out. In doing so, I later realized, we got to our room a few seconds earlier.

I was quite pleased with driving. Rand got out and took our suitcase, and I took a moment longer to grab my purse and coat. I pulled my enormous carry-on shoulder bag from the back, and decided not to bother with a shopping bag in the backseat, which contained swag from Rand’s event.

I could, very easily, have walked around to the back door, unlocked it, and grabbed the swag bag. The whole process would have taken about 10 seconds. But I didn’t.

I keep thinking about that.

Instead, I followed Rand up the narrow, stone-lined walkway to our cottage. It was dark, and I didn’t really notice the giant, looming eucalyptus tree that hung over it. I was a few seconds behind my husband, and I came up to him just as he was about to open the door. At that precise moment, there was a loud rustling and crashing behind us.

It sounded like someone had been stomping on the floor above us – except, of course, that there was no floor above – only open sky, as we stood just outside the entrance of our room.

“What the hell?” Rand said. It was too dark to figure out what was going on. He went inside and turned on the porch light, illuminating the walkway behind us.

That’s when we saw what had happened. 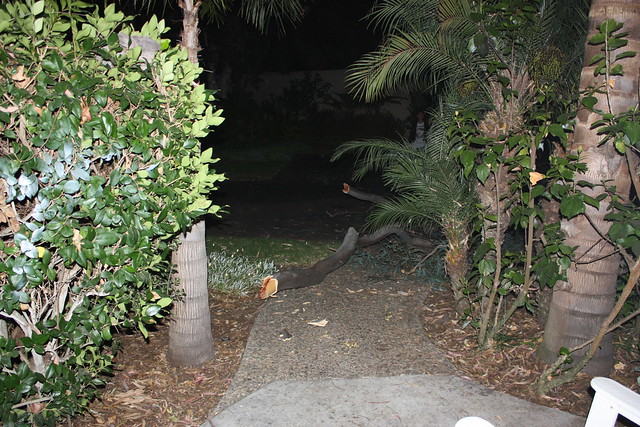 An upper bough of the eucalyptus tree above had snapped. It came crashing down just behind us – precisely where we’d been just a few seconds before. 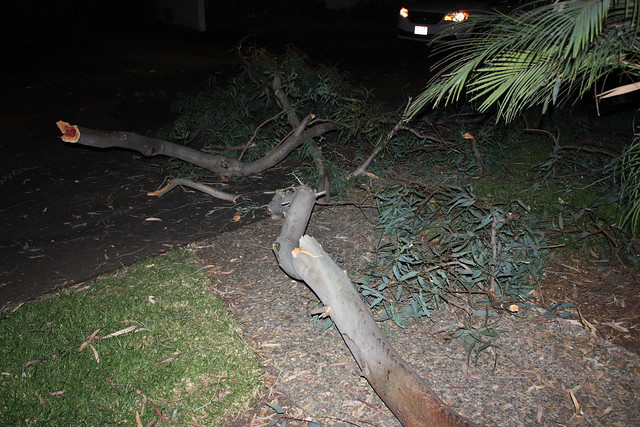 “Oh, god.” Rand said. He immediately went to the phone and called the front desk to tell them what happened. A couple of guests walking nearby shouted to us to see if we were okay. I nodded, mutely.

And then I did the thing that I always do when I’m not sure how to react. I grabbed my camera, and I began taking photos. 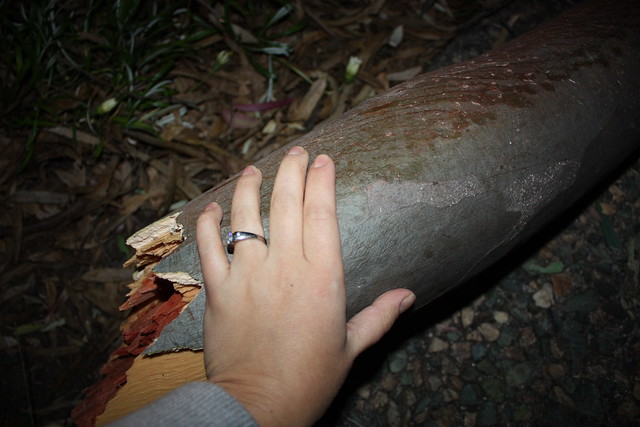 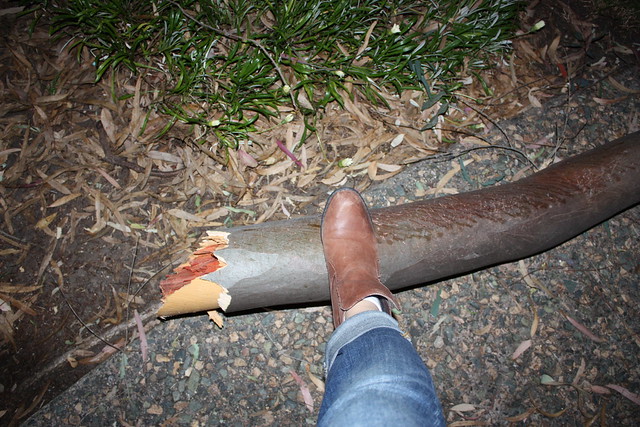 The bough was roughly as thick as my thigh. Those of you who’ve met me well know (all kidding aside) that my thighs are not small. 8 inches in diameter, at least, and 20 inches around. The arm of the tree was every bit as wide, but roughly twenty feet long. It extended from our walkway well into the road, blocking it. 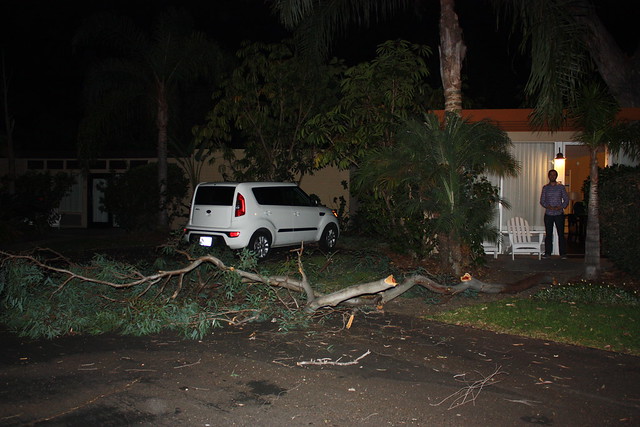 It took only a moment for one of the hotel staff to drive up in a tiny golf cart and check if we were okay. I nodded. He walked over, and tried dragging the tree limb out of the way. It did not budge. He exhaled deeply.

“That would have killed someone,” he said, assessing its size properly for the first time.

“Yeah,” I mumbled, and made some crack about how Rand and I should buy lotto tickets. When I am uncomfortable, I rely on lame jokes.

He explained that the landscaping crew had just been there the other day, so it was odd that the limb had fallen. I nodded. Even stranger was that the day was incredibly still – there wasn’t much of a wind, and it hadn’t been stormy. The bough, when I looked at it, seemed fresh and damp where it had broken off. It just gave out, a matter of seconds after we’d passed underneath it. 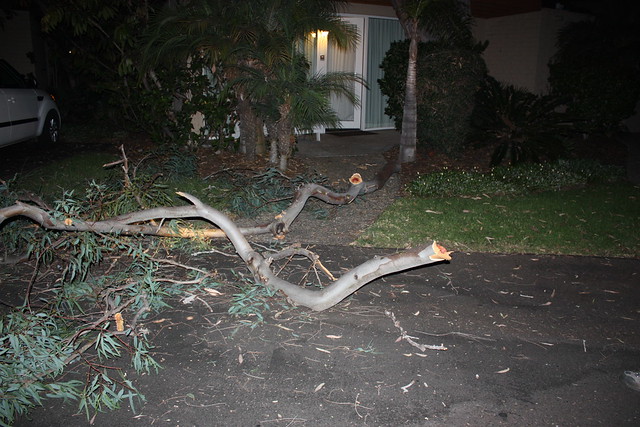 Looking back on these photos, I guess two branches fell, and not one. This is in no way comforting.

A little while later a maintenance truck came by, and they managed to drag the bough away.

It was an accident, of course. It would have been a miserable stroke of bad luck if we’d been hit. I tell myself this, but it doesn’t make me feel better.

We didn’t hear a word from the staff. Other than the gentleman who’d arrived shortly after it happened, no one knocked on our door to see if we were okay. No one called to check on us. The next day we left, without speaking to anyone at the front desk. My only interaction was staff was a brief, slightly snippy exchange on Twitter, during which I voiced my displeasure at being charged four dollars for a bottle of water that I’d thought was complimentary.

That’s how I operate, I guess. It’s easy to react to being overcharged for water. The response comes quickly, effortlessly.

It’s kind of bad form for the hotel, so you let them know. 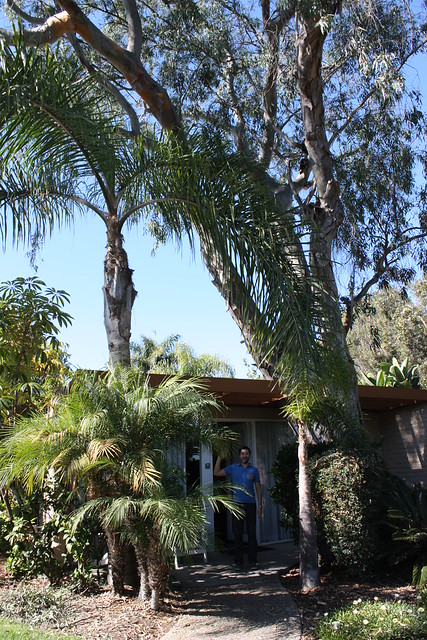 Rand, the next morning, and the eucalyptus tree. 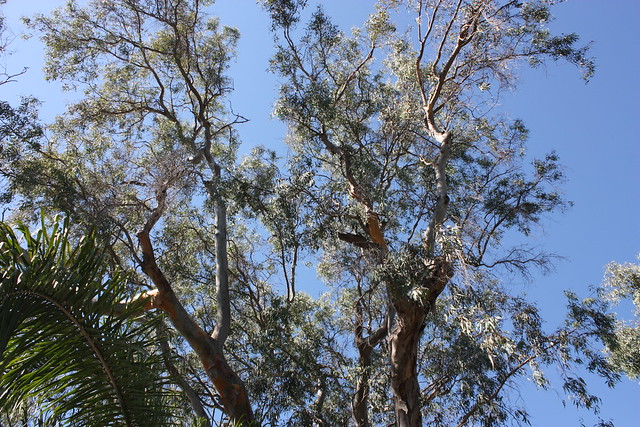 Just right of center, you can see where the bough broke off.

But being almost hit by a tree that could easily have killed you and your beloved, and would have – in a best-case scenario – sent you to the hospital with a bevy of broken bones? What do you say to that? How do you react?

I suppose I’ll need a bit of time to figure out the answer to that one.