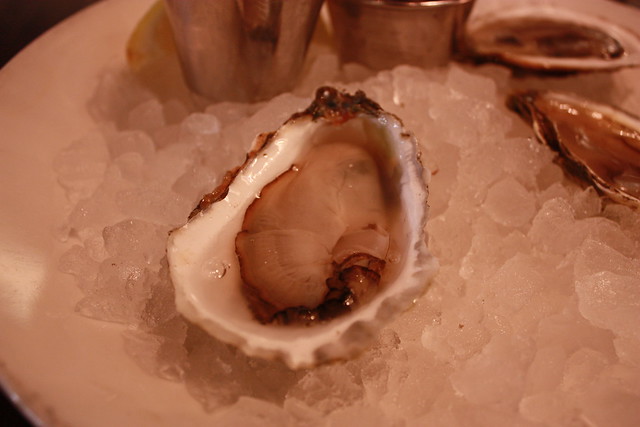 Don’t let the idea of eating an entire raw animal in one bite scare you.

I arrived at Oyster House long after the lunch rush, which is one of the advantages of traveling eastward – by the time you are hungry, everyone else has eaten.

It came recommend to me by our friend Nora, with whom we were staying.

“It’s really good,” she said. “And don’t worry – they have more than just oysters.”

I loved her cautionary disclaimer, because it was so unnecessary. If Oyster House only served oysters, I would have gone just the same. I love oysters. Cold and tender and tasting of the sea. There is something familiar and comforting about that. I may be a child of both coasts, but make no mistake: I am a child of coasts.

No, no – Oyster House would do just fine, thank you very much, even if nothing else was on the menu. 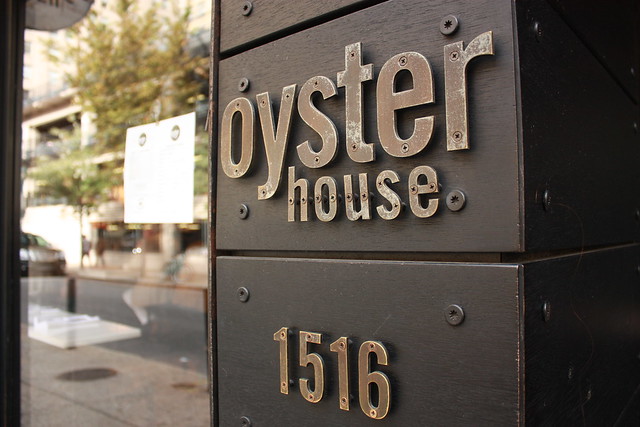 The exterior was dark and simple; the interior lovely, an enormous raw bar at center and polished wood tables throughout. 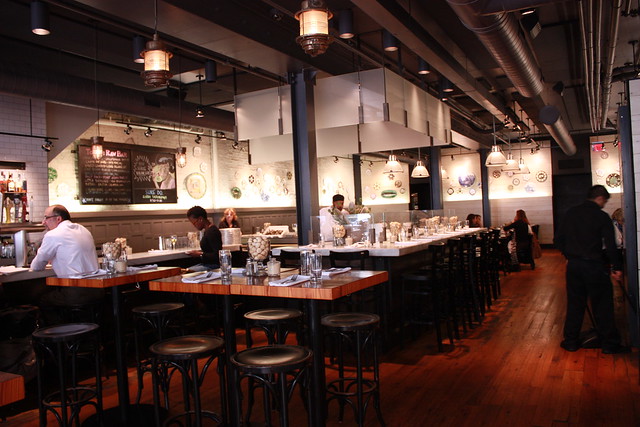 Along the walls hung oyster plates, something which, until that moment, I didn’t know existed. They were apparently big in the Victorian times, when oysters were very in. As the era passed, and life became more informal, the need for such accouterments went as well. 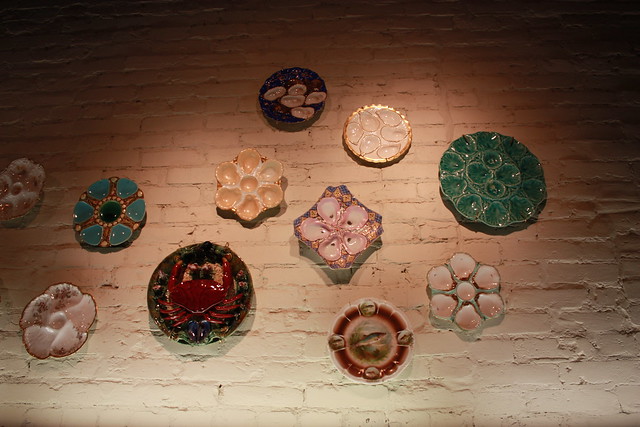 At each table was a large chalice filled with oyster crackers. The second I was seated I reached for one and began gnawing on it. I was about halfway through it before I realized that maybe, maybe, it was just there for decoration. 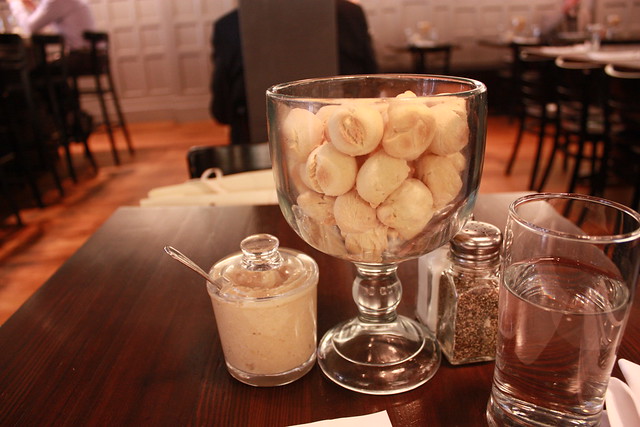 Nervously, I scanned the restaurant. I was the only person eating the enormous, orb-like crackers. No, wait! A gentleman at the bar was doing the same. But, oh dear, he was rocking a faux hawk, so his judgment was clearly circumspect.

I continued eating my cracker, anyway, because it’s not like I live in Philadelphia. I seriously doubted someone would stop me on the street and scream, “YOU! YOU’RE THE GIRL WHO EATS TABLE CENTERPIECES!”

Besides, I like crackers. But really, there was a sort of brilliant vagueness to it. I imagine regulars could take their friends there and pretend to be horrified when someone ate a cracker.

“THOSE ARE DECORATIVE ONLY!” they’d scream. And fun would be had by everyone except the poor fool nibbling on the cracker.

I began my meal with oysters because when in Oyster House … 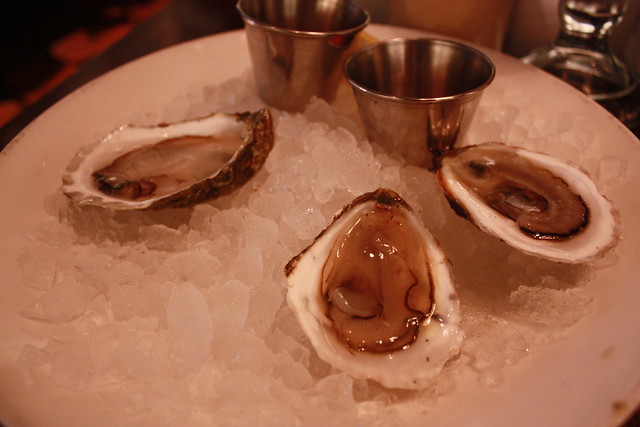 If you were to distill the flavor of the ocean, if you somehow managed to bottle the mist that rises off the waves and place it on your tongue, it would taste exactly like an oyster. I have no doubts of this.

And just like a baseball inning with a terrible team at bat, it was over in a blink. One, two, three … 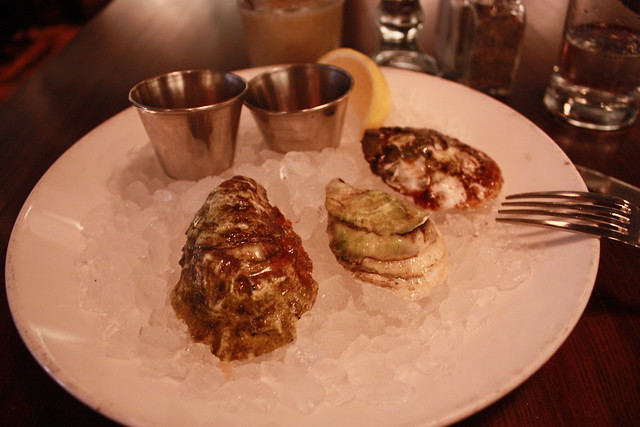 At the server’s suggestion, I ordered the tuna salad, after confirming that it was not a tuna-in-a-can-drenched-in-mayo sort of thing. She was taken aback by my question – which, when I finally saw the entree, I decided was a fair reaction. It was a far cry from deli-style tuna salad. The chef prepared the fish himself, and so it was in huge, delicious chunks, mixed with green apples, cherry tomatoes, roasted artichokes, and baby spring greens. 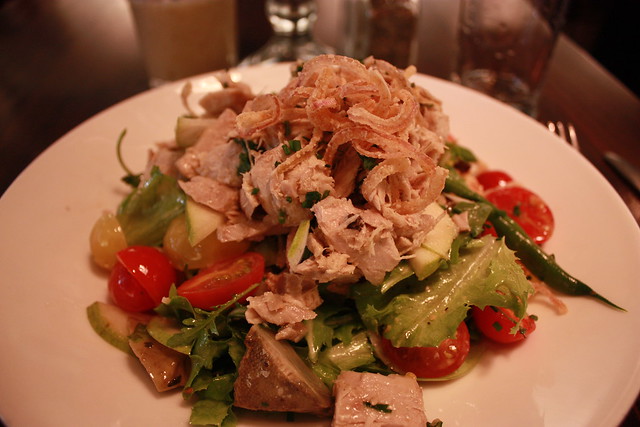 I demolished it in the way one only can a salad – knowing that even if you stuff it all into your face at once, no one will think you are that much of a glutton because, after all, it’s mostly vegetables. (The same holds true for pies with fruit fillings, right? RIGHT?)

It was lovely – a mix of sweet and savory in a tart, citrusy vinaigrette. As I picked at a fried shallot that topped it, I wondered it if my choice of entree wasn’t almost too polished, too haute cuisine for the setting. Perhaps I should have gone with the fried oyster sandwich?

Next time, I thought. And there would be a next time. I promised myself I’d drag Rand to Oyster House whenever we returned to Philadelphia. We’d sit down, and I’d offer him an oyster cracker.

And the second he took a bite, I’d whisper, “Those aren’t for eating.”